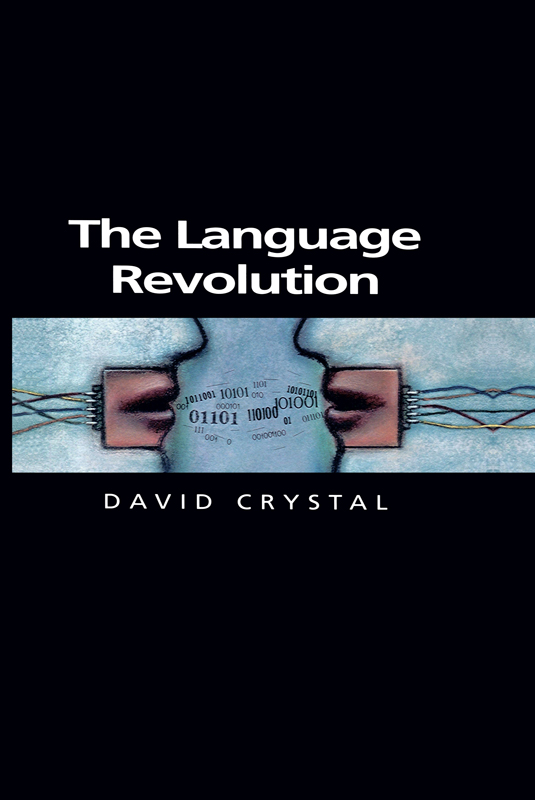 The right of David Crystal to be identified as Author of this Work has been asserted in accordance with the UK Copyright, Designs and Patents Act 1988.

All rights reserved. Except for the quotation of short passages for the purposes of criticism and review, no part of this publication may be reproduced, stored in a retrieval system, or transmitted, in any form or by any means, electronic, mechanical, photocopying, recording or otherwise, without the prior permission of the publisher.

A catalogue record for this book is available from the British Library and has been applied for from the Library of Congress.

Printed and bound in the United States by

THEMES FOR THE 21ST CENTURY

Norberto Bobbio,
Left and Right: The Significance of a Political Distinction

Paul Hirst,
War and Power in the 21st Century

Bill Jordan and Franck DÃ¼vell,
Migration: The Boundaries of Equality and Justice

3Â Â Â Â The Role of the Internet

The Language Revolution
is an attempt to see further by standing on the shoulders of three of my books published between 1997 and 2001:
English as a Global Language, Language Death
and
Language and the Internet.
The topics evolved as a trilogy, but it was only after the third book was completed that the complementarity of their themes became apparent to me. The present book highlights the interrelationship between them, and takes a view about the contemporary significance of the language trends they discuss.

I have been faced with a literary problem, as a consequence, and I hope my solution is acceptable. Because the âThemes for the 21st Century' series is aimed at a general readership, I have assumed that readers will
not
be familiar with the earlier books. The first three chapters, accordingly, incorporate summaries of the three arguments. This will generate a strong sense of dÃ©jÃ  vu among those readers â I imagine, mainly linguists and language professionals â who
have
read them, for which I apologize. But the present account was not written with them primarily in mind.

The âThemes for the 21st Century' series also likes to keep references and notes to a minimum, and so my few notes are here chiefly to provide a source for the occasional quotation. The downside of this procedure is that, if
readers want to investigate the basis of my observations in further detail, they will have to go to the earlier books, which contain several hundred footnotes and bibliographical references â though in the case of
English as a Global Language,
these appear only in the second edition, published in 2003.

The year 2000 marked the end of a decade of linguistic revolution. The new century must deal with its consequences.

Few people noticed at the time. But then, language change is like that â taking place slowly and subtly, unpredictable in its outcome, and recognized only after some time has passed. Most of us take language very much for granted, in any case, and are not used to bringing it into the forefront of our attention. And as revolutions affecting language do not happen very often in human history, it isn't obvious what to look out for when one does come along. Even the language professionals â the practitioners of linguistics â took until the end of the decade to draw public attention to the unprecedented nature of the various events they were observing. And we still lack integrated accounts of what happened â this book is a first attempt. But once we stand back and reflect on the dramatic linguistic changes which took place during the 1990s, the case that we are living at the beginning of a new linguistic era is, I believe, unassailable.

You might have guessed that Something Was Up if you had noticed that 2001 was designated the European Year of Languages. This was the first time a whole year had been devoted to languages, and although it was being
celebrated only in Europe, it was ambitiously general in its aims. It was not, after all, called the Year of European Languages â in the sense of âlanguages indigenous to Europe'.
All
languages spoken in Europe were included in its remit â and that meant dozens of African and Asian languages used by minorities all over the Continent. It was a year which focused on the importance of language as an expression of cultural identity, as a medium of international and national intelligibility, and as a means of enabling individuals and countries to open doors to a wider cultural and commercial world. It might just as easily have been called the European Year of Language. The acronym would have been the same: EYL.

Many events took place in many countries during that year, and one of the outcomes was the establishment of 26 September as an annual World Language Day, to keep public attention focused on the importance of plurilingualism â or, if you prefer, multilingualism â and foreign language learning. It was the second such decision. In 1999, UNESCO had already created 21 February as International Mother Language Day â a date which commemorated the deaths on that date in 1952 of five students defending the recognition of Bangla as a state language of former Pakistan (now Bangladesh). Here too the aim was to protect and promote linguistic diversity and multilingual education. Two âdays' devoted to language within three years! Languages had never received such limelight before. Was it a coincidence that the momentum for such outcomes gathered pace so successfully during the mid-nineties? If a language revolution was taking place, then probably not. This is precisely the kind of practical outcome we would expect to see if people were deriving fresh motivation and enthusiasm from a growing sense of new linguistic energies.

I do not believe that ârevolution' is too strong a word for what has been taking place. A ârevolution' is any combination
of events which produces a radical shift in consciousness or behaviour over a relatively short period of time, and this is what has happened. There are always continuities with the past, but these are outweighed by the emergence of a genuinely fresh perspective. In the context of an individual language, revolutions are rare. In the history of English, for example, we might identify two, only, since the arrival of the language in Britain in the fifth century. First, in the early Middle Ages, there was the combination of linguistic developments and sociopolitical factors which around the eleventh century changed Old English to Middle English, with very different grammar, and an admixture of Romance elements that profoundly affected spelling and vocabulary â a revolution which took us, in effect, from
Beowulf to
Chaucer. Then there was the period in the fifteenth century which took us from Chaucer to Shakespeare, resulting in an Early Modern English which was very different from its Middle English predecessor in grammar, sounds and spelling, and characterized especially by the standardizing effect of printing and the cumulative impact of the Renaissance, with its vast influx of classical vocabulary. Since Shakespeare, the language has developed steadily, but its character has not been radically altered â as is evidenced by the fact that we can go to a Shakespeare play and understand most of what we encounter. It is patently âthe same' language â an intuition we do not have so comfortably when we encounter Chaucer, and not at all when we try to read
Beowulf.

Many other languages have displayed their own periods of revolutionary change, but these have occurred at different times and for different reasons. The wars, alliances and political revolutions that cause massive social (and thus linguistic) change do not follow any shared or predictable timetable. The French Revolution had major consequences for both French and the minority languages of
France, but little linguistic impact elsewhere. The Russian Revolution, likewise, led to policies which seriously affected the maintenance of regional and minority languages in the Soviet Union; but again, with negligible impact outside. It is unusual to find changes which are so broad in their implications that they affect groups of languages, and extremely rare to find changes which are so global that they affect all languages. Indeed, to illustrate the last point we have to alter the level of the illustration and refer to the arrival of new media â such as writing, printing, telephony and broadcasting â whose influence on the character of languages has been universal. The Internet is the latest of these media, and its impact on language â as we shall see in chapter 3 â has been the most revolutionary of all. This is a case where there is so little continuity with previous communicative behaviour that the term ârevolution' is especially well motivated â and, indeed, is in danger of being overused.

What makes the second half of the twentieth century â and the 1990s in particular â a highly significant period in the history of language is that we can find there a coming together of three major trends, each global in its implications, which together have fundamentally altered the world's linguistic ecology. It is the combined impact of these trends, affecting all languages in unprecedented ways, which warrants my use of the epithet ârevolutionary'. I have written separately on each of them, but this is the first attempt to bring them together into a single frame of reference, and to explore the consequences for the future of languages in particular and of language in general. In
English as a Global Language
(1997), I discussed the reasons for the emergence of English as the world's first truly global language, and the dramatic effect this newfound status is having on English itself. The future of English is not as clear-cut as might be assumed â an
argument I review in chapter 1.
Language Death
(2000) presented the crisis facing huge numbers of languages which are currently endangered or dying, and reported the fresh initiatives being taken towards preservation and regeneration. Here we are faced with the probable loss this century of at least half the world's languages, raising issues which are taken up in chapter 2. And in
Language and the Internet
(2001), I examined the radical effect on language of the arrival of Internet technology, which has supplemented spoken and written language with a linguistically novel medium of communication, and raised fresh questions about the way language will continue to evolve. These issues are reviewed in chapter 3.

The three topics are usually discussed separately, as these books illustrate, with points of interconnection referred to only in passing. When we examine them together, and focus on the interrelationships, we encounter a vision of a linguistic future which is radically different from what has existed in the past. It is a future where we will need to revise many cherished concepts relating to the way we think about and work with languages. Some pointers towards the nature of the revision are brought together in chapters 4 and 5. The concerns turn out to be general, going well beyond the responsibilities of linguists, language teachers and others professionally engaged in the language âbusiness', and involving sectors of society not traditionally considered to have much connection with linguistic affairs. But that is the nature of revolutions. They affect everyone.

Mirror 04 The Way Between the Worlds by Ian Irvine
A Season of Love by Amy Clipston
Gossamer Ghost by Laura Childs
Sylvie's Cowboy by Iris Chacon
Beauty and the Bull Rider by Victoria Vane
Rumble Tumble by Joe R. Lansdale
Night Beach by Trent Evans
Come with Me (Let It Be Me #2) by Tiara Bosh
Old Lady (Iron Disciples Book 2) by Daniella Tucci
Morning Glory - A Novelette by S.L. Scott