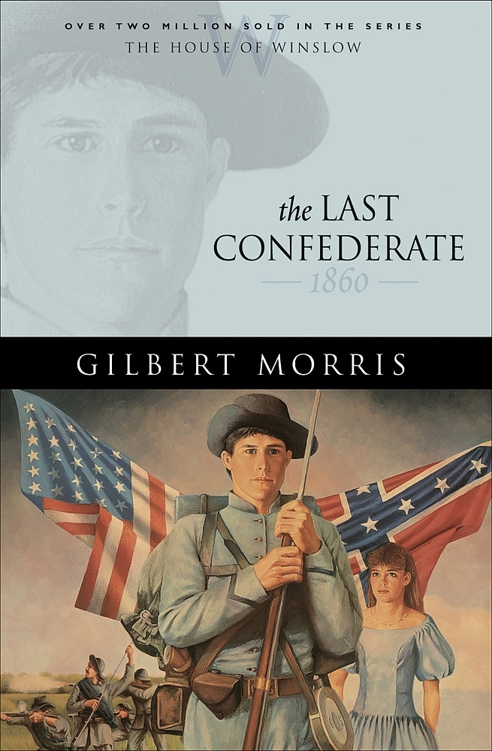 May you both grow up to be

handmaidens of the Lord.

21. The Court-martial of Thad Novak

Captain Hubbard nodded with satisfaction as the
Dixie Queen
nosed into Richmond just as darkness fell on the James River. The ship was seventy feet long and thirteen feet eight inches deep, which allowed it to navigate the narrow river with few problems. Over the top of the levee Hubbard saw the yellow glow of the lantern lights on Cherry Street, and even over the drum of his pounding engines he heard the sound of a band playing a tinny marching song.
Must be some kind of military shindig goin’ on,
he mused. The war furor that had shaken the land all through the year of 1860 often resulted in such celebrations.

The captain’s eyes lighted on the large white sign with the black 3 on it. “Mr. Tyler,” he called out of the wheelhouse window, “there’s our dock—get your lines out and make fast!”

The ship bounced off a piling with a heavy
thump,
and the deckhands scurried around, attaching the lines to the dock.

“Lower the plank—lively now!” Tyler, the first mate, shouted. He looked up at the wheelhouse and bellowed in a bullhorn voice, “Cap’n, you want to unload tonight?”

“Wait till morning, but take that stowaway to the jail as soon as we’re anchored well.”

Tyler turned. “You there, Mason,” he called, “see that the ship is secure, then give the boys leave to go into town.”

After issuing the order the first mate walked along the deck until he came to a small iron-bound door near the port
paddlewheel. Pulling a key from his pocket, he unlocked it. “All right—come out of there!”

No one answered. Tyler lit a lantern hanging on the outer wall, and entered the small, dark room. It was a storeroom packed with rope, cables, paint, and gear of all sorts. He swung the lantern around until the light fell on a figure asleep on a coil of rope. The sailor grabbed the arm of the sleeper with his meaty hand and pulled him roughly to his feet, snarling, “You can sleep in the jail, boy!”

He held the lantern high, his piercing gaze checking the stripling before him. The boy stared at him with eyes strangely bright. The red splotches on his cheekbones indicated high fever. He was perhaps two inches short of the mate’s six feet, but so thin that his clothing hung like sacks. His jet-black hair was almost invisible against the shadows, and there was something foreign in the angular planes of his wedge-shaped face. When the vagabond had been discovered hiding in the small runabout the previous day, the captain said, “Looks too young to be much of a criminal,” but the mate insisted that the boy be locked up and turned over to the sheriff at Richmond.

Now Tyler felt sure he had been right, for there was a wildness in the boy’s face. The mate took a firmer grasp on the thin arm and jerked his prisoner out of the storeroom and down the deck, cursing him for dragging his feet. When he stepped off the gangplank onto the wharf, the sailor was pleased to see that the man sitting on a bale of cotton wore a star on his checked shirt and a gun in a worn holster.

Before the man with the star could answer, one of the young loafers leaning against the wall of a warehouse spoke up. He was a short man with an enormous walrus mustache that wiggled as he said, “Him? Not no way, sailor boy! This here’s jest ol’ Shippy Williams.”

“You keep yore mouth shet, Dooley!” Williams glared at
the other, then said loudly to Tyler, “I’m William Shippy, deputy around here. “Whatcha got here?”

“Looks like a fugitive from the poorhouse to me,” Dooley said. He moved closer to examine the prisoner. “Why—he ain’t nothin’ but a nubbin’, sailor boy!”

“I tol’ you to keep yore oar outta this, Dooley!” Shippy snapped. “It ain’t none of yore business! Now, then, you want me to arrest this here feller?”

“I reckon,” Tyler replied. “He stowed away on the
Queen.
He’s probably running away from something—the law, most likely. Must be some kind of a wanted poster out on him.” He stared at Shippy carefully. “You sure you got the authority to take him in?”

“Authority! See that badge? And you see this hogleg?” Shippy pulled the old cap-and-ball Colt from the holster and waved it under the mate’s nose.

“Watch out with that thing!” Tyler snapped. He looked at the silent prisoner, then glanced over toward the lights of town; the music was getting louder and he wanted to get started on his own celebration. “Well, you got him, Deputy.” He shoved the prisoner toward Shippy, who took a sudden step backward and put the huge bore of the pistol on the boy’s chest.

“Watch yourself, Shipp!” Dooley hooted, following the pair down the wharf. “He’s a dangerous character, ain’t no doubt. Probably robbed a Sunday school picnic or some other such bad business.”

“Git on there, you,” Shippy said, poking the prisoner with the huge pistol. “An’ I don’t need none of yore help, Dooley Young. Best git on ’bout yore own business.”

But Dooley was not to be denied. He followed the deputy closely, giving him a constant flow of advice as they passed through the gap in the levee and walked down the incline to the south end of town. The jail was at the north end of Cherry Street. They continued on in the dark across the grassy
field that led to the cobblestones forming the main street of Richmond, Virginia.

The prisoner stumbled and almost fell once, and it was evident that he could not go much farther. By the time they reached Cherry Street, the lights from shops and saloons cast their glow over broad avenues lined with buggies and filled with horsemen.

Ordinarily Richmond would have been relatively quiet at this time, but now crowds cheerfully jostled one another as they celebrated. A six-piece band was making its way up the street, playing “The Girl I Left Behind Me” with more volume than accuracy.

Several times the trio passed by saloons, from which wafted out to the street a wave of raucous noise and the odor of raw whiskey. The restaurants were doing a brisk business, and the smell of cooking pork mixed with the smell of whiskey.

Several times Shippy stopped friends to explain importantly that he had arrested a man, while Dooley pointed out the dangerous appearance of the prisoner. Finally they came to a squat red brick building with JAIL written over the door, and Shippy shoved the prisoner inside. He tried to slam the door to keep Dooley out, but the little man was too quick. He slipped inside and grinned at the large man behind the desk. “Hidee, Shurf Bailey. Your deputy’s done made an important arrest.”

“Will you shet up!” Shippy yelled. “
I’m
the deputy, and I’ll do my own talking. Sheriff, I want to report—”

“You’d best put up that cannon before you do any reportin’,” Sheriff Bailey suggested softly. He was such a huge mountain of a man, made even bigger by the heavy fur coat he wore, that the soft voice seemed to come from someone else. He carefully watched as Shippy put the pistol away; then he continued peeling the large apple almost hidden in his big hands. He listened as Shippy rambled on for five minutes, carefully closed the gold-handled knife, slipped it into his vest pocket, and leaned forward in the cane chair.

“What’s your name, son?” he asked, taking in the pale face, the red spots on the cheeks, and the trembling hands.

“My name is Novak—Thaddeus Novak.” The boy looked up at the sheriff defiantly.

“No you ain’t,” the sheriff said, noting the slight hesitation. “Maybe you will be in a couple of years.” Then he asked abruptly, “You wanted for something where you come from, Thad, or are you a runaway?”

“Well, shoot!” Shippy broke in. “You don’t speck he’s gonna come out and admit it, do you, Sheriff?” He pulled at the handle of the pistol with irritation. “You want me to lock him up till we find out what he’s did?”

“I ain’t done nothin’,” Novak protested. “Nothin’ but steal a ride on that boat.” His eyes were black as night, but dull with fatigue as he stared at the sheriff.

Bailey carefully picked a choice spot on the apple and bit off a small piece. He chewed it slowly, tasting the flavor. The long silence that followed was interrupted only by the man’s soft munching. It seemed as if he had forgotten the youth before him. Then he looked at Novak and said mildly, “You know, I think that’s right.”

“What!” Shippy yelled. “You mean to tell me yo’re gonna turn him loose?” His face flushed with anger and his beady eyes almost popped out of his head.

“Ain’t no paper out on him that I remember, Deputy,” Bailey answered. “If we undertake to lock up every kid that stows away on a riverboat, we’ll need a sight bigger jail than this one. You just go on and do some more patrolin’.”

Midnight Star by Catherine Coulter
How to Be an Antiracist by Ibram X. Kendi
Left at the Mango Tree by Stephanie Siciarz
Three Women of Liverpool by Helen Forrester
Bob Moats - Jim Richards 01-03- 3 for Murder Box Set by Bob Moats
Not A Girl Detective by Susan Kandel
Kelly's Quest (NYC LOVE Book 2) by Ann, Jennifer
Magical Mayhem by Titania Woods
The Watcher in the Wall by Owen Laukkanen
The Hunted by Jacobson, Alan