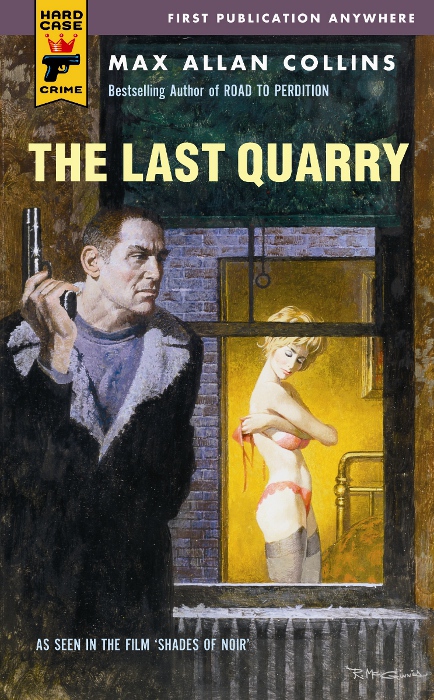 Raves For the Work of MAX ALLAN COLLINS!

“No one can twist you through a maze with as much intensity and suspense as Max Allan Collins.”

“Collins is a master.”

“Collins has an outwardly artless style that conceals a great deal of art.”

“Collins breaks out a really good one, knocking over the hard-boiled competition (Parker and Leonard for sure, maybe even Puzo) with a one-two punch: a feisty storyline told bittersweet and wry...nice and taut...the book is unputdownable. Never done better.”

“Collins has a gift for creating low-life believable characters...a sharply focused action story that keeps the reader guessing till the slam-bang ending. A consummate thriller from one of the new masters of the genre.”

“For fans of the hardboiled crime novel...this is powerful and highly enjoyable reading, fast moving and very, very tough.”

“Collins makes it sound as though it really happened.”

“A gift for intricate plotting and cinematically effective action scenes.”

“So vivid and colorful that it’s like watching a movie [and he] gives the reader a front-row seat.”

“Nobody does it better than Max Allan Collins.”

The ex-gangster walked into the trees, heading toward the yawning white expanse of frozen water. I followed behind, nine millimeter in one hand, sawed-off in the other.

As we wound through the pines, the snow got deeper, ankle deep in places. Finally, at the snowy edge of the wooded shore, Harry came to a stop, and half turned.

I gestured with the shotgun, toward the lake.

Harry followed the gesture, eyes tight, and it took a few seconds for him to absorb the meaning. Somehow, though, he couldn’t turn his confusion and apprehension into words.

Harry looked at the lake, then at me; the lake, me.

His voice seemed even higher pitched than before, almost childish, his wide eyes buggy behind the lenses. “What...what if the ice gives, under me? I mean...it’s gonna get thin, farther out I get....”

“We’ll keep the stress to a minimum.”

FADE TO BLONDE
by Max Phillips

TOP OF THE HEAP
by Erle Stanley Gardner

TWO FOR THE MONEY
by Max Allan Collins

THE CONFESSION
by Domenic Stansberry

HOME IS THE SAILOR
by Day Keene

KISS HER GOODBYE
by Allan Guthrie

PLUNDER OF THE SUN
by David Dodge

THE GIRL WITH THE LONG GREEN HEART
by Lawrence Block

THE GUTTER AND THE GRAVE
by Ed McBain

A TOUCH OF DEATH
by Charles Williams

SAY IT WITH BULLETS
by Richard Powell

WITNESS TO MYSELF
by Seymour Shubin

For Jeffrey Goodman—who brought my killer to life

It had been a long time since I’d had any trouble sleeping.

Not since the fucking shelling was keeping me awake, a lifetime or two ago. I’m not by nature an insomniac. You might think killing people for a living would give you some bad nights. Truth is, guys in the killing biz? Just aren’t the type to be bothered.

I was no exception. I hadn’t gone into retirement because my conscience was bothering me. I retired because I had enough money put away to live comfortably without working, so I did. And for a while that retirement had gone well. I’d invested a little and was living off the gravy; I’d even been married for a while, which had worked out fine.

Currently I was deposited in an A-frame cottage with a deck onto the frozen expanse of Sylvan Lake, somewhere in Minnesota, only it’s not called Sylvan Lake and maybe it’s not Minnesota, either. I was staying at the only resort on this side of the lake, Sylvan Lodge, but I was not a guest—I ran the place. Or, anyway, did when it wasn’t off-season.

Once upon a time I had owned a resort in Wisconsin
not unlike this—not near the acreage, of course, and not near the occupancy; but I had
owned
the place, whereas here I was just the manager.

Of course I didn’t have anything to complain about. I was lucky to have the job. When I ran into Gary Petersen in Milwaukee, where he was attending a convention and I was making a one-night stopover to remove some emergency funds from several bank deposit boxes, I was at the loosest of loose ends. The name I’d lived under for over a decade was unusable; my past had caught up with me, back at Paradise Lake, where everything went to hell in an instant: my straight business yanked from under me, my wife (who’d had not a clue of my prior existence) murdered in her sleep.

Gary, however, had recognized me in the hotel bar and called out a name I hadn’t used since the early ’70s: my real one.

“Jack!” he said, only that wasn’t the name. For the purposes of this narrative, however, we’ll say my real name is Jack Keller.

“Gary,” I said, surprised by the warmth creeping into my voice. “You son of a bitch...you’re still alive.”

Gary was a huge man—six six, weighing in at somewhere between three hundred pounds and a ton; his face was masked in a bristly brown beard, his skull exposed by hair loss, his dark eyes bright, his smile friendly, in a goofy, almost child-like way.

“Thanks to you, asshole,” he said.

We’d been in Vietnam together.

“What the hell have you been doing all these years, Jack?”

I was, incidentally, pretty drunk. I don’t drink often, but I’d been through the mill lately.

Gary slipped his arm around my shoulder; it was like getting cuddled by God. “Bro—what’s the deal? What shit have you been through?”

“They killed my wife,” I said, and blubbered drunkenly into his shoulder.

We went to his suite. He was supposed to play poker with some buddies but he called it off.

I was very drunk and very morose and Gary was, at one time anyway, my closest friend, and during the most desperate of days.

I told him everything.

I told him how after I got back from Nam, I found my wife—my first wife—shacked up with some guy, some fucking auto mechanic, who was working under
a car when I kicked the jack out. The jury let me off, but I was finished in my hometown, and I drifted until the Broker found me. The Broker, who gave me the name Quarry, was the conduit through whom the murder-for-hire contracts came, and, what? Ten years later the Broker was dead, by my hand, and I was out of the killing business and took my savings and went to Paradise Lake in Wisconsin, where eventually I met a pleasant, attractive, not terribly bright woman and she and I were in the lodge business until the past came looking for me, and suddenly she was dead, and I was without a life or even identity. I had managed to kill the fuckers responsible for my wife’s killing—political assholes, not wiseguys—but otherwise I had nothing. Nothing left but some money stashed away, that I was now retrieving.

I told Gary all this, through the night, in considerably more detail though probably even less coherently, although coherently enough that when I woke up the next morning, where Gary had laid me out on the extra bed, I knew I’d told him too much.

He was still asleep. Like me, he was in the same clothes we’d worn to that bar; like me, he smelled of booze, only he also reeked of cigarette smoke. I reeked a little, too, but it was Gary’s smoke: I never picked up the habit. Bad for you.