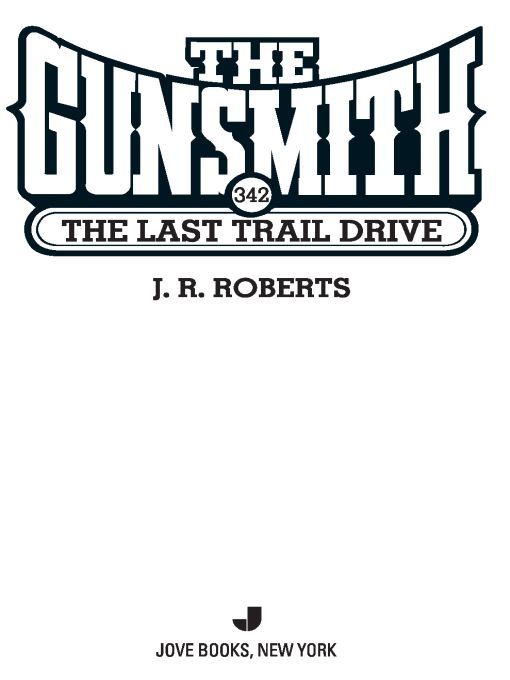 Table of Contents
Title Page
Copyright Page
Â
ONE
TWO
THREE
FOUR
FIVE
SIX
SEVEN
EIGHT
NINE
TEN
ELEVEN
TWELVE
THIRTEEN
FOURTEEN
FIFTEEN
SIXTEEN
SEVENTEEN
EIGHTEEN
NINETEEN
TWENTY
TWENTY-ONE
TWENTY-TWO
TWENTY-THREE
TWENTY-FOUR
TWENTY-FIVE
TWENTY-SIX
TWENTY-SEVEN
TWENTY-EIGHT
TWENTY-NINE
THIRTY
THIRTY-ONE
THIRTY-TWO
THIRTY-THREE
THIRTY-FOUR
THIRTY-FIVE
THIRTY-SIX
THIRTY-SEVEN
THIRTY-EIGHT
THIRTY-NINE
FORTY
FORTY-ONE
FORTY-TWO
FORTY-THREE
FORTY-FOUR
FORTY-FIVE
FORTY-SIX
Â
Teaser chapter
Killer Conversation
“You must be Santiago Jones.”
“That's me,” Jones said. “I've got an idea, Adams.”
“What's that?”
“Why don't we step down from our horses and settle this between us?”
“That sounds good to me.”
“Your man will stay out of it?”
“He will. And yours?”
“They will, too.”
“Okay, then,” Clint said. “Step down.”
“Is he serious?” Coleman asked.
“No,” Clint said. “Watch the others. They'll draw, for sure.”
“I don't know . . .”
DON'T MISS THESE ALL-ACTION WESTERN SERIES FROM THE BERKLEY PUBLISHING GROUP
THE GUNSMITH by J. R. Roberts
Clint Adams was a legend among lawmen, outlaws, and ladies. They called him . . . the Gunsmith.
LONGARM by Tabor Evans
The popular long-running series about Deputy U.S. Marshal Custis Longâhis life, his loves, his fight for justice.
SLOCUM by Jake Logan
Today's longest-running action Western. John Slocum rides a deadly trail of hot blood and cold steel.
BUSHWHACKERS by B. J. Lanagan
An action-packed series by the creators of Longarm! The rousing adventures of the most brutal gang of cutthroats ever assembledâQuantrill's Raiders.
DIAMONDBACK by Guy Brewer
Dex Yancey is Diamondback, a Southern gentleman turned con man when his brother cheats him out of the family fortune. Ladies love him. Gamblers hate him. But nobody pulls one over on Dex . . .
WILDGUN by Jack Hanson
The blazing adventures of mountain man Will Barlowâfrom the creators of Longarm!
TEXAS TRACKER by Tom Calhoun
J.T. Law: the most relentlessâand dangerousâmanhunter in all Texas. Where sheriffs and posses fail, he's the best man to bring in the most vicious outlawsâfor a price. 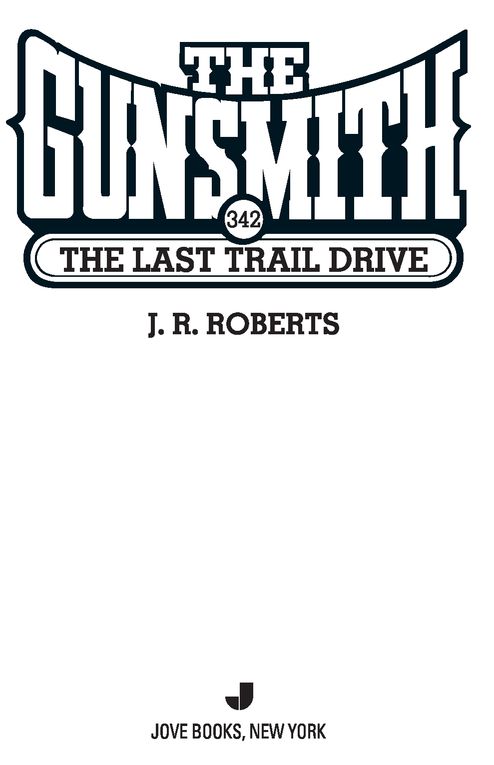 ONE
Doan's Crossing, in the Texas Panhandle, was once the jumping-off place for trail drives heading north to Colorado and Montana. As Clint Adams rode into town he could see it had fallen on hard times. Trail drives were not a commonplace occurrence anymore. Towns that once depended on them for their livelihoodsâDodge City, Ellsworth, Doan's Crossingâwere dying.
Clint was not in Doan's Crossing for old times' sake, though. He was there to meet a friend of his, an old-time trail boss named Flood. He didn't know why Flood wanted to meet him, or why he wanted to meet in this town, but they were good enough friends that he came anyway.
He had ridden to the Panhandle directly from Labyrinth, Texas, arriving exactly on the day he and Flood were to meet. He hadn't seen Henry Flood in five years. Flood was fifty then, and was lamenting the oncoming end of the great trail drives. Flood was smart enough to see how the railroad was spreading, and soon drives would not be necessary to move cattle. Also, the advent of barbed wire, and the invention of Gustavus Swift's refrigerated car, were pretty much sealing the deal.
The reason Flood wanted Clint to meet him here, where many of the man's cattle drive's had pushed off, had to have something to do with cattle, but what? Clint had ridden in from the south and had seen neither hide nor hail of a steer. He was just going to have to wait for Flood to arrive to find out.
Clint saw to it that Eclipse was well cared for at a livery stable, and then got himself a room at the Central Hotel. He checked with the clerk, but no one named Flood had checked in yet.
He stowed his things in his room, and then went to the Crystal Palace Saloon. Once a thriving saloon and gaming establishment, it had obviously fallen on hard times. It was early, but that was not the reason there was no gambling going on. As he entered he saw that all the gaming tables that had once filled the place were gone. In their place were empty tables and chairs.
Clint went to the bar, where a barman was fighting boredom by wiping the bar down with a dirty rag. When he saw Clint, he slung the rag over his shoulder.
“Help ya?”
“Beer.”
“Right.”
The man brought Clint a beer that was warm and had too much head.
“That the best you can do?” Clint asked.
“Best I can do,” the barman said, “and best you're gonna get in town.”
“Glad I'm just passing through then,” Clint said.
“Least it's wet.”
Clint took a sip, and decided that was all that could be said for the beerâit was wet.
“Days of cold beer are gone, I'm afraid,” the barman said. “Left with the cattle drives, I guess.”
“How long you been a barman?” Clint asked.
The man grinned.
“Since the cattle drives left,” he said.
“Drover?”
“Cook, if you can believe it,” the man said. “I know, I look more like a waddie.”
Clint studied the man. He was tall, about six three, looked fit, except for a slight potbelly. Had the look of a waddie more than a cook. In his forties, he was still capable of participating in a cattle drive . . . if he could find one. A
waddie
used to be called a rustler, but as the years went on became known as a cowboy who moved from outfit to outfit, working cattle drives.
“Came here a few years ago looking to hook up with some outfit,” he said. “Never did. Took this job as a temporary thing.” He laughed. “Temporary.”
“When was the last drive that came through here?” Clint asked.
“' Bout one or two each year the last few years, but they wasn't hirin',” the barman said.
“You know a man named Henry Flood? HankâHank Flood?” Clint asked.
“Flood? Don't know 'im, but heard of 'im.”
“Heard of him lately? Here in town?”
“No, not lately,” the barman said. “Why? You lookin' for him?”
“He's looking for me,” Clint said.
The man stuck out a large hand.
“Name's Spud,” he said. “Spud Johnson.”
“Spud?”
The man grinned.
“I can do wonders with a potato.”
Clint shook his hand and said, “Clint Adams.”
“Clint . . . Adams?” Spud asked.
“That's right.”
“You friends with Flood, Mr. Adams?” Spud asked.
“I am,” Clint said. “Long time.”
“So you're not here for . . . I mean, to cause . . . um, I mean, to killâ”
“Don't believe everything you read or hear, Spud,” Clint said. “I don't go anywhere to kill anyone. Understand?”
“Oh, yessir,” Spud said. “I understand good.”
“Calm down,” Clint said, as the man grew tense. “There's nothing to be nervous about. The only thing I'm here to kill is some time over a warm beer.”
“Yessir.”
“I'm going to take a turn around town,” Clint said. “If Hank Flood does come in looking for me tell him to stay put. I'll find him.”
“I'll do it, Mr. Adams.”
“It's Clint, Spud,” Clint said. “It's just Clint. Okay?”
“Yessir,” the barman said. “That's okay with me.”
TWO
There was one other saloon in operation in Doan's Crossing. There used to be more, but one by one they had gone out of business. There also used to be a number of whorehouses, but now there was just one.
Debra Moore remembered when the trail drives used to come to townâor, more to the point, the drovers. They used to come to the whorehouses by the dozens, trying to get their ashes hauled one last time before they hit the trail for three months. Some men found it nearly impossible to go that long without a woman.
ADS
15.4Mb size Format: txt, pdf, ePub

Surrender in Silk by Susan Mallery
Voyage of the Dead - Book One Sovereign Spirit Saga by Forsyth, David
Create Your Own Religion by Daniele Bolelli
Breathless Awakening (The Breathless Series) by Aybara, K
Allegiance by Kermit Roosevelt
Chandler: Books 4 The Witch and the Vampire by Fawn Lowery
Pack of Strays (The Fangborn Series Book 2) by Dana Cameron
People of the Tower (Ark Chronicles 4) by Vaughn Heppner
The Deep End of the Ocean by Jacquelyn Mitchard
After Tuesday by Ericson, Renee