The Leisure Seeker: A Novel 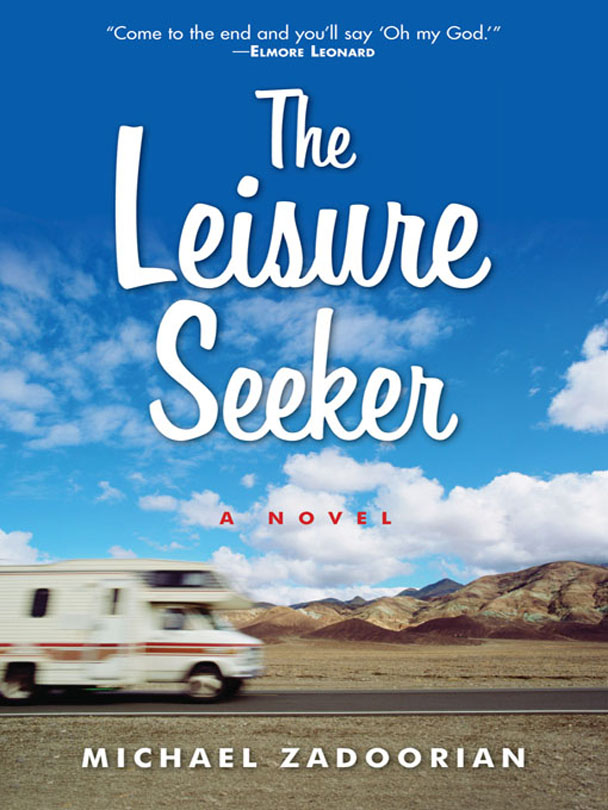 For Norm and Rose

Which is more fair,

The star of morning or the evening star?

The sunrise or the sunset of the heart?

The hour when we look forth to the unknown,

And the advancing day consumes the shadows,

Or that when all the landscape of our lives

Lies stretched behind us, and familiar places

Gleam in the distance, and sweet memories

The objects we behold, that soon must vanish?

The world is full of places to which I want to return.

Other Books by Michael Zadoorian

I have recently come to terms with this. My husband and I were never the kind who traveled to expand our minds. We traveled to have fun—Weeki Wachee, Gatlinburg, South of the Border, Lake George, Rock City, Wall Drug. We have seen swimming pigs and horses, a Russian palace covered with corn, young girls underwater drinking Pepsi-Cola from the seven-ounce bottle, London Bridge in the middle of a desert, a cycling cockatoo riding a tightrope.

I guess we always knew.

This, our last trip, was appropriately planned at the last minute, the luxury of the retiree. It is one that I’m glad I decided we take, although everybody (doctors, children) forbade us to go. “I strongly, strongly advise against any type of travel,
Ella,” said Dr. Tomaszewski, one of the seemingly hundreds of physicians currently attending to me, when I hinted that my husband and I might take a trip. When I casually mentioned the idea of even a weekend getaway to my daughter, she used a tone that one would normally reserve for a disobedient puppy. (
“No!”
)

But John and I needed a vacation, more than we’ve ever needed one before. Besides, the doctors only want me to stay around so they can run their tests on me, poke me with their icy instruments, spot shadows inside of me. They’ve already done plenty of that. And while the children are only concerned with our well-being, it’s still really none of their business. Durable power of attorney doesn’t mean you get to run the whole show.

You yourself might ask: Is this the best idea? Two down-on-their-luck geezers, one with more health problems than a third world country, the other so senile that he doesn’t even know what day it is—taking a cross-country road trip?

Don’t be stupid. Of course it’s not a good idea.

There’s a story about how Mr. Ambrose Bierce, whose scary tales I enjoyed as a young girl, decided when he got to his seventies that he would simply shove off to Mexico. He wrote, “Naturally, it is possible, even probable, that I shall not return. These being strange countries, in which things happen.” He also wrote: “It beats old age, disease, or falling down the cellar stairs.” Speaking as someone who is acquainted with all three of those, I heartily agree with old Ambrose.

Put simply, we had nothing to lose. So I decided to take action. Our little Leisure Seeker camper van was packed and ready. We have kept it that way ever since retirement. So after assuring my children that a vacation was indeed out of the question, I kidnapped my husband, John, and we stole off, headed for Disneyland. That’s where we took the kids, so we like it better than the other one. After all, at this point in our lives, we are more like children than ever. Especially John.

From the Detroit area, where we’ve lived all our lives, we make our way west across the state. It’s a lovely trip so far, peaceful and steady. The air stream at my vent window creates a satin whoosh of white noise as the miles tug us from our old selves. Minds clear, aches diminish, worries evaporate, at least for a few hours. John doesn’t speak at all but seems very content to drive. He’s having one of his quiet days.

After about three hours, we stop for our first night in a small resort town that fancies itself an “artists’ colony.” As you enter the town proper, you pass, shrouded among the evergreens, a painter’s palette the size of a children’s wading pool, each daub of paint neatly dotted with a colored electric bulb that illuminates its corresponding hue. Next to it, a sign:

This is where we spent our honeymoon almost sixty years ago (Mrs. Miller’s Boarding House, long since burned down). We rode the Greyhound bus. That was our honeymoon: taking
the dog to western Michigan. It was all we could afford, but it was exciting enough for us. (Ah, the advantages of being easily amused.)

After checking in at the trailer court, we two walk around town a bit, as much as I’m able, to enjoy what’s left of the afternoon. I’m very pleased to be here again with my husband so many years later. It’s been at least thirty years since we last visited. I’m surprised to find the town has not changed much—lots of confectioners, art galleries, ice cream parlors, and old-time shops. The park is where I remember it. Many of the early buildings are still standing and in good shape. I’m surprised that the town’s fathers didn’t feel the need to tear everything down and make it new. They must understand that when people are on vacation, they just want to return to a place that feels familiar, that still feels like it’s theirs, even if just for a short time.

John and I sit on a bench on Main Street where the autumn air is heavy with the scent of warm fudge. We watch families pass by, wearing shorts and sweatshirts, eating ice cream cones, chattering away, their laughter low-pitched and lackadaisical, the unwound voices of people on vacation.

“This is nice,” says John, his first words since we got here. “Is this home?”

John is always asking if somewhere is home. Especially in the last year or so, when things started getting worse. The memory problems started about four years back, though there
were signs of it earlier. It’s been a gradual process with him. (My problems arose much more recently.) I’ve been told that we’re lucky, yet it doesn’t feel that way. With his mind, first the corners of the blackboard were slowly erased, then the edges, and the edges of edges, creating a circle that grew smaller and smaller, before finally disappearing into itself. What is left are only smudges of recollection here and there, places where the eraser did not completely do its job, reminiscences that I hear again and again. Every once in a while, he knows enough to realize that he has forgotten much of our life together, but these moments happen less and less these days. It cheers me on the rare occasion when he is angered by his forgetfulness because it means he’s still on this side, here with me. Most of the time, he’s not. It’s all right. I am the keeper of the memories.

During the night, John sleeps surprisingly well, but I hardly close my eyes. Instead, I stay up reading and watching some late-night talk-show nonsense on our tiny battery-powered TV. My only company is my wig up on its Styrofoam perch. We two sit here in the blue dim, listening to Jay Leno under the roar of John and his adenoids. It doesn’t matter. I can’t doze for more than a couple of hours, anyway, and it rarely affects me. These days, sleep feels like a luxury that I can scarcely afford.

John has left his wallet, coins, and keys on the table like he does at home. I pick up his massive sweat-cured leather brick
of a billfold and open it. It gives off a mossy smell and makes a sticky noise as I flip through it. The wallet is a mess, the way I imagine his mind, things all mixed up and gummed together, tangled in the way I’ve seen in the brochures at the doctors’ offices. In there, I find scraps of paper stained with illegible scrawl, calling cards from people long dead, an extra key for a car sold years ago, expired Aetna and Medicare cards next to new ones. I bet he hasn’t cleaned it out in about a decade. I’m not sure how he manages to sit on the thing. No wonder his back always hurts.

I shove my fingers into one of the compartments and find a piece of paper folded twice over. Unlike everything else, it doesn’t look like it’s been there forever. I unfold it and see that it’s a picture ripped from somewhere. At first glance, it seems to be a family photograph—people gathered together in front of a building, but none of the people in the photo are familiar to me. When I unfold the tattered fringe at the bottom, I see a caption:

I should explain that we receive a ridiculous amount of mail from this company. At some point early in his illness, John fixated on the Publishers Clearing House company. He was always entering their sweepstakes, accidentally subscribing us to magazines that we didn’t need—
Teen People, Off-Roader
,
Modern Ferret.
Pretty soon, those SOBs were sending us three letters every week. Later, it just got harder and harder for John
to figure out the entry instructions, so the letters, opened and half-explored, started to pile up.

It takes me a moment, but I finally figure out why John has this picture in his wallet. He thinks it’s a photo of his own family! I start laughing. I laugh so loud that I’m afraid that I’ll wake him up. I laugh until tears come. Then I rip that photograph into a hundred tiny pieces.

An early start through the gloom of interstate Indiana toward Chicago, where we will pick up Route 66 at its official starting point. Normally, we wouldn’t go anywhere near a big city. They are dangerous places if you’re old. You simply can’t keep up and will be promptly ground into the pavement. (Remember that.) But it’s Sunday morning and traffic is about as light as it gets. Even still, giant loud semitrucks grind and huff past us going 75, 80 mph and faster. Yet John is unshakable.

Though his mind is fading, he’s still an excellent driver. I’m put in mind of Dustin Hoffman in that
Rain Man
movie. Maybe it’s because of all our car trips in the past, or the fact that he’s been driving since he was thirteen, but I don’t think he’ll ever forget how. Anyway, once you get into the rhythm of long-distance driving, it’s only a matter of direction (my
job—mistress of the maps), avoiding those sudden, unexpected exits, and looking out for the danger that comes up fast in your mirror.

Without notice, the air goes gray and flat. Foundries and factories shimmer in the distance, under a shroud of grimy haze.

John frowns, turns to me, and says, “Did you fart?”

Outside Chicago, the Dan Ryan Expressway isn’t crowded, but everyone drives too damn fast. John tries to stay in the right lane, but lanes are continually added on or taken away. I’m sorry now we didn’t just catch Route 66 out by Joliet, as I had originally planned. It’s just that part of me needed to do this trip from the very beginning to the very, very end.