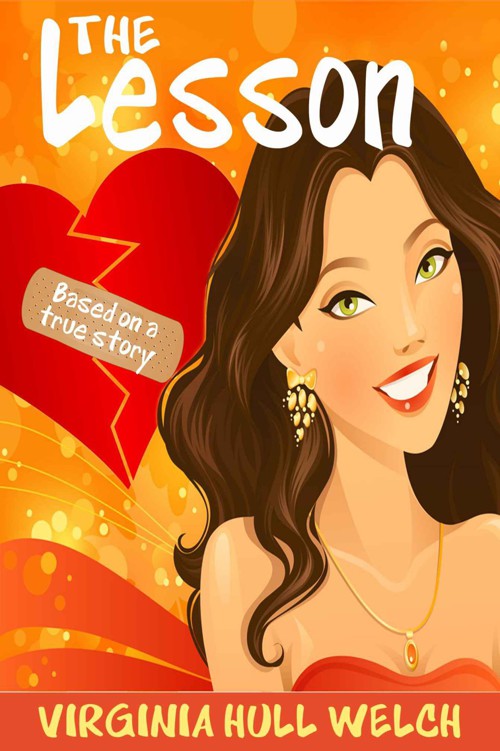 Based on a True Story

Copyright 2013 by Virginia Hull Welch. All rights reserved. This book may not be used or reproduced in any form whatsoever, in whole or in part, without written permission of the author, except for brief quotations embedded in critical articles and reviews. For information contact Virginia Hull Welch, [email protected]

Other books by Virginia Hull Welch:

What to Do When the Blessings Stop

The Hiss from Hell Only Women Hear

To Ken, the love of my life

To my children and their children

that
you may know that God is faithful

The Lesson
is based on true events touched lightly with the brush of artistic license to move the story forward. To protect privacy of certain individuals I have changed their names, ages, physical descriptions, vocations, and other details; therefore any resemblance to real persons, living or dead, is purely coincidental. In some instances I have changed locations where events took place. Of course I do not remember word-for-word conversations after so many years, but I have strived in good conscience to deliver dialogue in the spirit of the conversations that live in my memory.

During spring break of my college sophomore year I had to make a painful decision, one more life-changing than any I had ever made or would make again. I remember the struggle of that week clearly. While my fellow Santa Clara University co-eds were showing off their shapely tans on West Coast beaches under an endless California sun (the pink bikini or the yellow?), I was agonizing over what I was about to lose: marriage, career, my entire future. Dreams were dashed, hearts were broken, faith was tested.

Mine came close to failing.

My story doesn’t start out so melodramatic. It was at a fall freshman dance in 1973 that I met him. Girl meets boy, they fall in love, they get married—it happens all the time on college campuses in America. Except this time we didn’t get married and there was no happily ever after. And it was all because of the events chronicled here, ten memorable days in particular, that the ill-fated lovers who walk these pages will never meet again. Mine is a sad story, but a true one.

He wasn’t supposed to be at the freshman dance. He was a twenty-five-year-old, third-year law student who had come only to check out the new crop of pretty eighteen-year-olds at the end of an exciting and busy freshman orientation week. The dance was the last orientation event, the grand finale that would wind up seven frantic days of dinners, meetings, speakers, and the like. Tonight, set to music from an overly loud rock band, there would be the surging thrum of hundreds of excited young people, delirious at being away from home for the first time, complete with breathless co-eds dressed in skinny tops and jeans, and a lot of tall, lean types holding up the dance hall walls, many of whom, like him, looked suspiciously like upperclassmen.

Outside in the open quad adjacent to Swig Hall, the dormitory set aside exclusively for freshmen, ever larger groups of streakers had been entertaining new students nightly, a spillover of orientation week insanity. Freshmen of both genders hung dangerously out the windows of Swig Hall’s eleven stories to get a better look at the bevies of naked Broncos, also of both genders, who, pumped by the least excuse and emboldened by too many beers, had, en masse, shunned their clothes to tear through the quad waving illegible flags while yelling unintelligible political phrases of the day, or whatever seems appropriate to yell when you are naked, running with fifty strangers through a public venue, and half lit. You never saw them start and you never saw them finish their mad dash against the establishment. You just saw the derrieres and the flags. Almost forty years later, that’s what I remember: the naked derrieres and the flags, not to mention the naked terror of hanging out my sixth floor window, peering dizzyingly at the hard, hard cement sidewalk straight, straight down.

But of that night in particular I remember with the acid-sweet clarity of first love the young man, leaning wistfully against the wall at the freshman orientation dance. He was handsome in an everyman sort of way: slender, almost six feet tall, coal-black hair, clean shaven, conservatively dressed, even a little preppy, likely the product of a private Jesuit high school. He stood alone, which is why I felt comfortable enough to ask him to dance. No wingman would be witness, poised to dissect my looks or words by evening’s end. If I flubbed my lines or was humiliated by rejection, my secret would be truly secret and safe, observed by one.

So I asked him to dance and he said yes. And we danced. We danced some more, and then we talked. Till after midnight we talked of anything and everything: of family, of school, of travel, of our individual dreams. As he walked me to my door on the sixth floor of Swig Hall, he kissed me. When he did, I knew this was the one. And I knew he knew it too.

Later I learned from his roommate Rolando that Michael had “floated” through his apartment door after leaving me for the night. He had, he
gushed to Rolando, met the most “beautiful girl in the world.” Imagine: ordinary me, in my ankle length, plum colored halter dress. I had danced my way into a dream.

And so that night began the romance that everyone thought would never end, the law student and the freshman English major. With great pride I brought him home to meet my parents, whose only requirements in a husband for their daughter was that he be male, Catholic, and employed. Michael more than fulfilled their requirements: I had snagged an up-and-coming lawyer. He was also witty, well read, not a military man, which pleased my mother, and was amenable to sharing a glass of wine with my father from time to time, which gave him high marks for sociability. It didn’t hurt, either, that he came from a long line of lawyers.

The expected engagement dinner soon followed, with toasts and smiles all around, and then the ring, a suitably large stone to impress the relatives. Mom was happy, Dad was happy. Everyone was happy. I, the first in the family to attend college—a prestigious, private Jesuit university at that—was planning to attend law school after graduation, and once I passed the bar and married Michael, we would be Jeffers & Jacobs, Attorneys at Law, or Jacobs & Jeffers, depending on whom you asked, or so the joke went. Everyone would be even happier. It was a beautiful dream.

Now it was spring break. Michael was well established in his first law office in Berkeley, about
an hour’s drive from the university. I was finishing my sophomore year, still studying English, which I thought to be a sensible foundation for someone who would eventually write brilliant legal arguments. We had been dating for eighteen months and now, this very month, right after a late-March Easter, we had become engaged. Everything was going to plan.

It is a singular truth that life does not always follow your plan.

Within days of my saying yes it was all over. On April 29 Michael took back the ring, and my magnificent dream of a perfect life—perfect man, perfect marriage, perfect career—was buried forever. I never spoke to Michael again.

But where one story ends another begins. Or, it can be said, the beginning and the ending are all one story. You may wonder why I would sit down and write my story considering that it is so painful. It’s been four decades, and the world does not need another tragedy. But the story that follows this sad one must be told, partly because you’ve heard only the first half, the sad half. The second half, I assure you, has a happy ending. But even a happy ending is not reason enough to share my story. I record these events now, after nearly forty years of silence, because now I understand their lesson.

“You followed me home.”

Gina stared in disbelief at steel-gray eyes that peered over her apartment door security chain. She may have been in shock over the stranger standing on the other side of her door, but she was clear minded enough to keep the chain in place and herself arm’s length, just in case. After all, she’d met him only an hour ago.

“Kevin, what are you doing here?” she said, straining to keep her voice to a whisper. “It’s ten thirty!”

“I’m with the FBI. Your apartment is under surveillance.” Kevin smiled fetchingly as he said this, but he made the mistake of moving his face closer to the jamb.

Gina reflexively grabbed the handle to slam it shut but stopped short of making a sandwich of his nose. She wouldn’t be taken in by a jokester, no
matter how charming, but likewise she didn’t want to do anything violent to draw attention. Blood was so unladylike. “I can’t believe you followed me home.”

“Only in the interest of national security.” That smile again.

“You can’t just show up here this late at night.”

“Too late for that debate. I’m already here. Can I come in for a few minutes?”

Gina hesitated. Their introduction had been brief, and he was a newcomer, not one of the regulars at the weekly Bible study. All she knew of him was that he was twenty-two and a sailor stationed aboard a U.S. Navy ship somewhere at Mare Island, wherever that was. He was tall and handsome in a boyish sort of way, with flawless skin any girl would love to have, and he had lots of wavy brown hair. But he wore weird clothes: forest green polyester pants and a cream colored, too stretchy sweater that would have been rejected by a K-Mart clearance rack. Good looks aside, she hadn’t been impressed when Mrs. Menzies had introduced them. Now here he was, standing on her stoop. She was unprepared at this hour to see a pair of eyes, any pair of eyes but particularly his, looking down at her through the narrow gap created by the chain.

“You can trust me, Gina. It’s all those other guys down at the campus that you have to worry about,” Kevin said as he jerked his head toward the university, seven blocks away.

“I’m in a better position than you to make judgments about Santa Clara guys.” Her voice stretched above a whisper now, her tone taught with offense. How dare he make assumptions about young men he had not met, some of whom were her friends? Unpretentious he was not.

“I live aboard ship with more than three hundred guys. I’m the expert on guy behavior, not you.” He said this with matter-of-fact sobriety, as if
she
was the one acting unreasonable at this hour of the night.

Because You'll Never Meet Me by Leah Thomas
Black Widow by Chris Brookmyre
The Six Rules of Maybe by Deb Caletti
Born to be Bad (International Bad Boys Book 3) by Carol Marinelli
The Big Hunt by J. T. Edson
Taming Kiera (Therian Agents Book 3) by Chantel Seabrook
Pleasing the Colonel by Renee Rose
A History of the Wife by Marilyn Yalom
The Returning by Ann Tatlock
2003 - A Jarful of Angels by Babs Horton