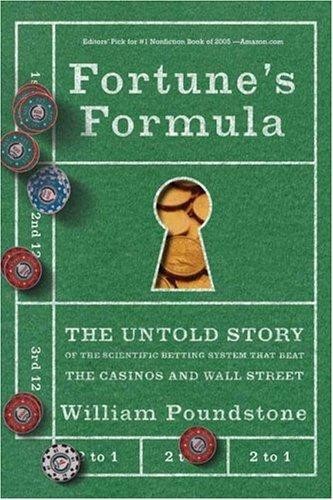 Hill and Wang
A division of Farrar, Straus and Giroux

Distributed in Canada by Douglas & McIntyre Ltd.
Published in 2005 by Hill and Wang

Fortune’s formula: the untold story of the scientific betting system that beat the casinos and Wall Street / by William Poundstone.—1st ed.

To Emily, Alyssa, and Weston

It’s getting so a businessman can’t expect no return from a fixed fight. Now, if you can’t trust a fix, what can you trust?

Mathematicians are like a certain type of Frenchmen: when you talk to them they translate it into their own language, and then it soon turns into something completely different.

Pearl Necklace
•
Reno
•
Wheel of Fortune
•
More Trouble Than an $18 Whore
•
The Kelly Criterion, Under the Hood
•
Las Vegas
•
The First Sure Winner in History
•
Deuce-Dealing Dottie
•
Bicycle Built for Two

Ivan Boesky
•
Rudolph Giuliani
•
With Tommy Guns Blazing
•
The Parking Lot
•
Welcome to the World of Sleaze
•
Ultimatum
•
Princeton-Newport Partners, 1969–88
•
Terminator
•
The Only Guy on Wall Street Who’s Not a Rat

T
HE STORY STARTS
with a corrupt telegraph operator. His name was John Payne, and he worked for Western Union’s Cincinnati office in the early 1900s. At the urging of one of its largest stockholders, Western Union took a moral stand against the evils of gambling. It adopted a policy of refusing to transmit messages reporting horse race results. Payne quit his job and started his own Payne Telegraph Service of Cincinnati. The new service’s sole purpose was to report racetrack results to bookies.

Payne stationed an employee at the local racetrack. The instant a horse crossed the finish line, the employee used a hand mirror to flash the winner, in code, to another employee in a nearby tall building. This employee telegraphed the results to pool halls all over Cincinnati, on leased wires.

In our age of omnipresent live sports coverage, the value of Payne’s service may not be apparent. Without the telegraphed results, it could take minutes for news of winning horses to reach bookies. All sorts of shifty practices exploited this delay. A customer who learned the winner before the bookmakers did could place bets on a horse that had already won.

It is the American dream to invent a useful new product or service that makes a fortune. Within a few years, the Payne wire service was reporting results for tracks from Saratoga to the Midwest. Local crackdowns on gambling only boosted business. “It is my intention to witness the sport of kings without the vice of kings,” decreed Chicago mayor Carter Harrison II, who banned all racetrack betting in the city. Track attendance plummeted, and illegal bookmaking flourished.