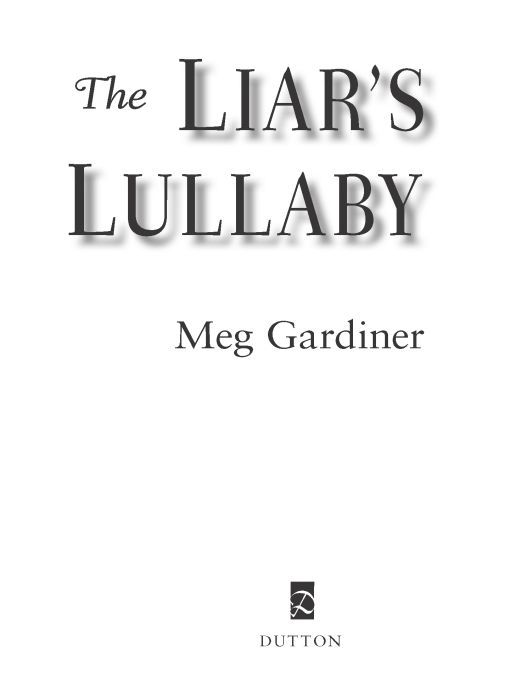 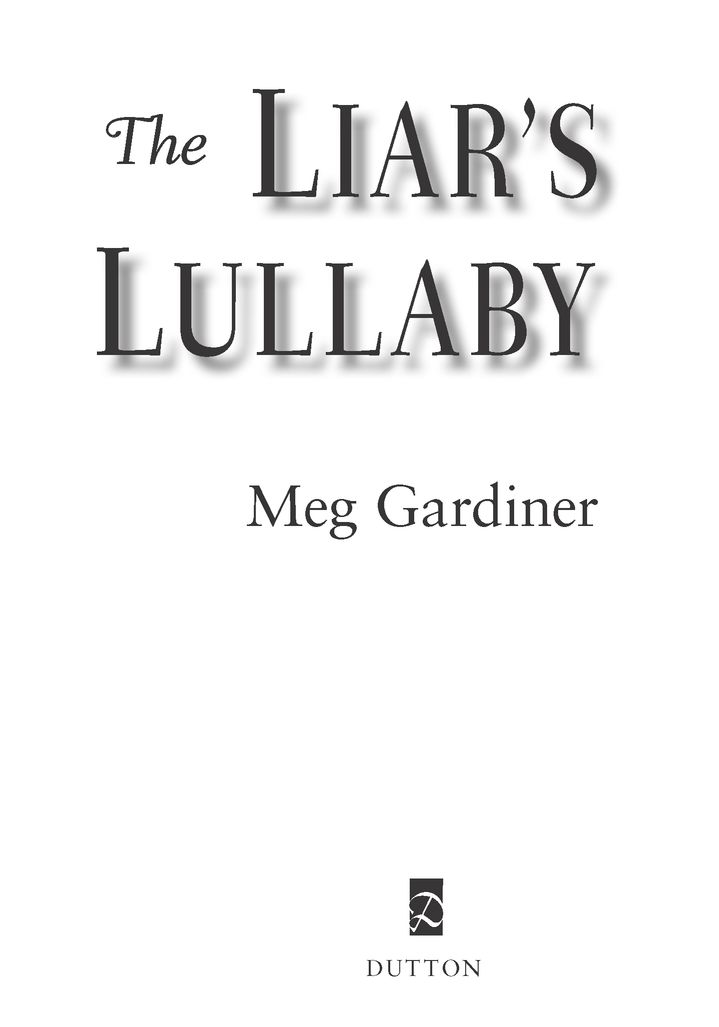 REGISTERED TRADEMARK—MARCA REGISTRADA
LIBRARY OF CONGRESS CATALOGING-IN-PUBLICATION DATA
Gardiner, Meg.
The liar’s lullaby / Meg Gardiner.
p. cm.
eISBN : 978-1-101-43298-3
1. Forensic psychiatrists—Fiction. I. Title.
PR6107.A725L53 2010
823’.92—dc22 2010005465
Set in Sabon
PUBLISHER’S NOTE
This book is a work of fiction. Names, characters, places, and incidents either are the product of the author’s imagination or are used fictitiously, and any resemblance to actual persons, living or dead, business establishments, events, or locales is entirely coincidental.
Without limiting the rights under copyright reserved above, no part of this publication may be reproduced, stored in or introduced into a retrieval system, or transmitted, in any form, or by any means (electronic, mechanical, photocopying, recording, or otherwise), without the prior written permission of both the copyright owner and the above publisher of this book.
The scanning, uploading, and distribution of this book via the Internet or via any other means without the permission of the publisher is illegal and punishable by law. Please purchase only authorized electronic editions, and do not participate in or encourage electronic piracy of copyrighted materials. Your support of the author’s rights is appreciated.

For Eleanor
1
H
ACK SHIRAZI BRACED HIMSELF IN THE OPEN DOOR OF THE HELICOPTER and gazed across San Francisco Bay at the crowded ballpark. Wind and engine noise buffeted him. The evening sun bisected his field of vision. The check had cleared, so he was going to deliver the Rambo. But they were running late, which put the failing gold light square in his eyes.
He shoved the banana clip into the Kalashnikov. “On my mark.”
In the helicopter flying alongside them, the second team positioned themselves in the doorway. They swept over the bay toward the city. Whitecaps foamed on the surface of the water, five hundred feet below. In the pilot’s seat, Andreyev held tight to the controls.
The Giants’ ballpark was filled to capacity. People jammed the stands and covered the field from home plate to the centerfield stage. The two Bell 212 choppers would fly beyond it, circle back, and make their run at the target from out of the sun.
Andreyev radioed their man on the ground. “Rock and roll.”
I
N THESTANDSBELOW, Rez Shirazi put a hand to his radio earpiece. “I hear you.”
Rock and roll was just about all he could hear. It echoed from the bleachers along the foul line, where beer- marinated rednecks whooped to the beat. From the teeming field, where sunburned college girls sang along with the saccharine lyrics. From the corporate hospitality suites on either side of him, where venture capitalists sipped mojitos and dipped five-dollar tortilla chips in mango chutney salsa.
Shirazi shook his head. Ersatz rock and roll—drowned in country-western cheese sauce. Tasteless, drippy American cheese.
Through his earpiece, he heard his brother Hack. “Four minutes. Mark.”
Rez clicked the timer on his watch. “Mark.”
On the stage, near towering speakers that amplified their cornpone accent, a choir of backup patriots was woo-wooing, while a singer in two-thousand-dollar cowboy boots wailed about the trials of the common man.
You can take my work, you can take my cash . . . but if you won’t shake my hand, I’ll light a fire up your—
“Ass,” Shirazi said.
The surrounding suites were jammed. People crowded the interiors and filled rows of seats on the balcony. But Rez’s suite was empty: no food, absolutely no drink, no loiterers. He stepped onto the balcony and checked their gear. The CO
2
canisters were in place. The zip line was secure. It was a stainless steel aircraft cable, clamped through a forged eyebolt and anchored to the girders that supported the upper deck of the stadium. He glanced at the video camera, then over the edge of the balcony. The drop was substantial.
Andreyev’s voice crackled through the radio. “I can’t see her on video. Is she there?”
O
N CUE, the door to the suite opened. Noise flowed in from the hallway outside. Tasia McFarland stormed in.
“Rez, they’re following me. Get rid of them. I can’t do this with all these people harassing me.”
His nerves fired at the sight of her. “She’s here.” For a millisecond his skin itched and his ears thundered. “Oh, brother.”
In his ear, Hack sounded sharp. “What’s wrong?”
Tasia already had the climbing harness cinched around her hips. That was no mean feat. She was wearing a magenta corset, which trailed back into ruffles that dragged on the floor. Beneath it she wore ripped jeans and turquoise cowboy boots. The top half of her looked like Scarlett O’Hara halfway through a striptease. The bottom half looked like she’d escaped a cage fight with a rabid badger.
Behind her, people streamed through the door. Stadium security men. A makeup artist. A wardrobe assistant. The soundman.
She spun on them. “Stop hounding me. You’re turning my head into a beehive. I can’t think. Get out
.
Rez, get them
out
.”
Rez put up his hands. “Okay. Chill.”
Her eyes gleamed, jade bright. “Chill? This is an event. This is a supernova. I’m at the shore of the Rubicon. And these”—she waved at the entourage—“these vampires are filling my head with static. They’re filling the score with noise and I won’t be able to hear what I need to hear to protect myself out there. Get them
out.
”
In his ear, Rez heard the director in the control booth. “Crap. Is she melting down?”
“You got it.” Rez gestured the entourage back. “You heard the lady. Everybody out.”
The makeup girl pointed at Tasia in dismay. “Look at her. She’s been playing in the crayon box.”
Rez pushed the girl toward the door.
The security men glowered. “This breaches protocol.”
“It’s not a problem,” Rez said. “We’ve done the stunt a dozen times.”
The soundman shook his head. “Her radio mike, she—”
“I got this.” Rez ushered the last of the crowd from the suite.
The soundman shouted over his shoulder. “It’s on your head, man.”
“I’m the stunt coordinator. It’s always on my head.” Rez shut the door.
“Lock it,” Tasia said.
Rez flipped the bolt. Tasia stalked around the room, glancing at corners and the ceiling, examining the shadows. Her ruffles trailed behind her like a peacock’s plumage.
“I used to think fame was a shield. But it won’t protect me. It’s only made me a target,” she said.
Rez glanced at his watch. “Celebrity’s tough.”
“Tough? It’s a life sentence. And life’s a bitch, and I’m a bitch, and then you die. Like Princess Di.”
Over the radio, Andreyev said, “Three minutes. We are inbound, beginning our run.”
“Roger,” Rez said.
In three minutes a computer program would set the special effects sequence in motion, and Tasia would make her grand entrance as the helicopters overflew the ballpark. And she was blowing a damned cylinder.
“And I’m not camera shy. But there’s an eye in the sky, watching me. Satellites, NSA, paparazzi. On TV, online, whenever I turn my back. I’m in their sights. Fawn in the headlights. Doe in the brights. Do, re, mi, fa, so long, suckers.”

The Dollhouse Society Volume I: Evelyn (Includes Indecent Proposal, Dreams in Black & White, Playing House, Freeze Frame, plus a bonus story!) by Myles, Eden
So Mote it Be by Isobel Bird
An Army at Dawn by Rick Atkinson
Sounds Like Crazy by Mahaffey, Shana
March Battalion by Sven Hassel
Freedom in the Smokies by Becca Jameson
Broken Compass: Supernatural Prison Story 1 by Jaymin Eve
Secrets of a Career Girl by Carol Marinelli
Where You End by Anna Pellicioli
Metal Gear Solid: Guns of the Patriot by Itoh, Project