Read The Lion at Sea Online

Tags: #The Lion At Sea

The Lion at Sea 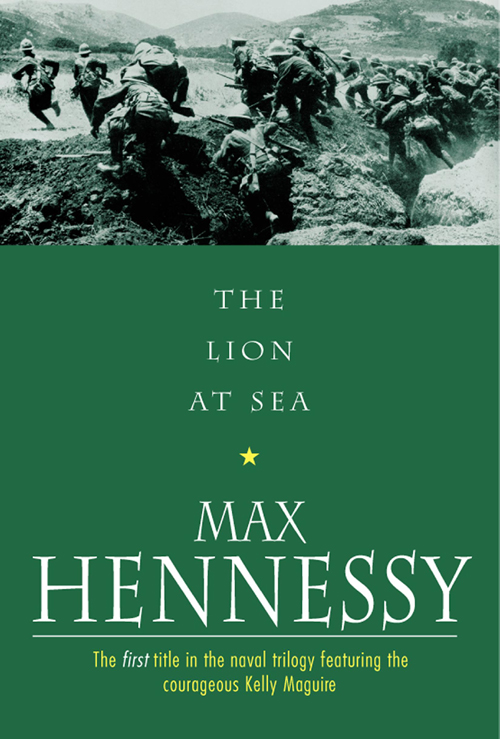 The Lion At Sea

The right of Max Hennessy (John Harris) to be identified as the author of this work has been asserted.

This is a fictional work and all characters are drawn from the author's imagination.
Any resemblance or similarities to persons either living or dead are entirely coincidental.

John Harris, wrote under his own name and also the pen names of Mark Hebden and Max Hennessy.

He was born in 1916 and educated at Rotherham Grammar School before becoming a journalist on the staff of the local paper. A short period freelancing preceded World War II, during which he served as a corporal attached to the South African Air Force. Moving to the Sheffield Telegraph after the war, he also became known as an accomplished writer and cartoonist. Other ‘part time’ careers followed.

He started writing novels in 1951 and in 1953 had considerable success when his best-selling
The Sea Shall Not Have Them
was filmed. He went on to write many more war and modern adventure novels under his own name, and also some authoritative non-fiction, such as Dunkirk. Using the name Max Hennessy, he wrote some very accomplished historical fiction and as Mark Hebden, the ‘Chief Inspector’ Pel novels which feature a quirky Burgundian policeman.

Harris was a sailor, an airman, a journalist, a travel courier, a cartoonist and a history teacher, who also managed to squeeze in over eighty books. A master of war and crime fiction, his enduring novels are versatile and entertaining.

There weren’t that many ships in the whole world!

In a patchy but warm sun, they stretched as far as the eye could see – two hundred and fifty of them, one hundred and seventy of them British. They formed a parallelogram six miles long by two miles wide, yet not a single man and not a single ship had been brought home from abroad for this tremendous display of that principal instrument of Pax Britannica, the Royal Navy.

The great vessels, many wearing admirals’ flags, were drawn up in two columns, first of all the dreadnoughts and super-dreadnoughts –
Collingwood, St Vincent, Superb, Vanguard
and others – great angular towering grey fortresses of floating steel sharp against the pearl-grey sky; then the battle cruisers –
Indefatigable, Indomitable, Inflexible, Implacable –
a
whole array of them, only slightly less formidable than the dreadnoughts. Then came the armoured cruisers, light cruisers, destroyers, submarines and torpedo boats, and all the ancillary vessels, representing every aspect of naval preparedness, the sea between them covered by darting cutters and picket boats like maybugs on a pond. Finally came the foreign battleships, the German
Von der Tann,
the French
Danton,
the American
Delaware,
and fifteen others, and the foreign potentates’ yachts, aflutter with flags – whole strings and windrows of them, all caught by the south-westerly breeze that poppled the grey water.

It was an awe-inspiring sight. Even to British eyes well used to the pomp and majesty of the Navy. Even to the somewhat indifferent gaze of Midshipman George Kelly Maguire, on the deck of the armoured cruiser,
Huguenot.
A solid phalanx of machinery and armour manned by thousands of the most skilled seamen in the world, the Coronation Review lay broodingly across the entrance to the Solent, one of the most vulnerable waterways in the British Isles, like a solid bulwark against aggression. A vast new fleet that was the brainchild of that dogmatic, difficult and spiteful volcano of a man, Admiral Sir John Fisher, the great ships belonged to a navy that he had transformed almost overnight – from the antiquated collection of Victorian men-o’-war that had previously graced naval reviews, to a Twentieth Century instrument fit to meet its first challenge for a hundred years and counter anything the Germans, whom Fisher had long since seen as the enemy, could throw against it.

With its stupefying dimensions and potential, it had been assembled to pay tribute to the newly-crowned monarch, George the Fifth, by the Grace of God King of England, Emperor of India and Defender of the Faith. And, staring from
Huguenot
over the ruffled grey water, untouched by the political overtones that lay behind the review and by the need in an atmosphere of growing European tension for a show of strength, Midshipman Maguire sincerely hoped in his unyielding youthful judgement that George the Fifth, King of England, Emperor of India and Defender of the Faith, appreciated what was being done for him. Because God alone knew how many gallons of paint had been slapped on by bored sailors, how many hundredweights of brass polish and holystone had been used to bring the great vessels up to the standard of cleanliness and beauty they now represented, how much sweat had been wasted, how much cursing uttered, how many hours sleep lost by officers from captains down to midshipmen like himself.

All morning sight-seeing steamers had been leaving for the broad waters of the Solent, and the King, wearing the uniform of an admiral of the fleet, had arrived at the South Railway jetty to the crack of guns from Portsmouth harbour as
Victory
, Nelson’s flagship at Trafalgar, had fired a salute. Then, accompanied by the Trinity House yacht and other vessels – every one of them stuffed to the bulkheads with dignitaries and officials – and escorted by torpedo boats whose task it was to ensure that wayward shipping was kept well clear of the review area which picket boats had previously emptied of pleasure craft, the royal yacht,
Victoria and Albert
, left harbour to the din of cheers from people lining the walls of the old port.

As Kelly Maguire watched, the clouds turned the sea to an iron darkness that caught only occasional glimpses of light, and, the great ships, sombre and black-looking with their great batteries of guns, steel turrets and ram bows, suddenly seemed less ceremonial than threatening, less decorative than purposeful. He drew a deep breath. He’d got out of the wrong side of his hammock that morning and, his boyish cheeks shaved to the bone, scrubbed, brushed and polished to within an inch of his life, he was in a questioning state of mind as he stared at all the splendour, and came to the conclusion that in recent years, despite Jacky Fisher, despite the reforms that had been made, naval pomp seemed to have become badly confused with power.

Aboard
Huguenot,
for
example, the captain, the Honourable Basil Acheson, was known – without too much effort of imagination either – as God. It was normal enough, of course, for the captain of any ship to be referred to and even regarded as God, but there was always an element of jesting in it, yet on Kelly’s first morning aboard, Captain Acheson had summoned to his spacious quarters aft his three newest and youngest officers, Midshipmen Maguire, Verschoyle and Kimister, and let them know exactly where they stood in the order of things.

‘Aboard
Huguenot
,’ he had announced, ‘I am God Almighty, and you are not even junior archangels. Indeed, gentlemen, if there were dogsbodies in Heaven, then that is what you would be, so that now that you’ve been promoted from cadets to midshipmen, take care that you don’t let it go to your heads. One thing more: It is not advisable to say “Good morning” to the captain of this ship before lunch. This is not a “good morning” ship.’

Even granting that Captain Acheson was unusual – a ‘character’, one of the last of the Victorian eccentrics, with a tendency
to enjoy displaying his eccentricities – it had hardly been encouraging.

His youthful eyes narrowed, Kelly Maguire stared again at the assembled fleet. A splash of colour fluttered from
Lord Nelson
’s yardarm and there was a scuffle of feet behind him, then the whole fleet seemed to burst into a riot of vivid flags as it dressed over-all. What had been a grey and sombre scene was transformed at once with gay bunting, and, as though in response, the sun appeared picking up the brasswork and white paint, the bulges of the turrets and the lines of the guns. It was as if someone had turned a floodlight on the fleet.

To Kelly Maguire, a rebel by nature and particularly a rebel this day because he had suffered his share of lost sleep and sweat, it all seemed an awful waste of effort. Not, of course, that anyone in that year of grace, 1911, gave a fig for the opinions of George Kelly Maguire or would do for many years to come. At the age of nineteen, he was nothing more than a mere cog in a huge wheel, all bony wrists and ankles as he grew out of a uniform he was too impoverished to replace at this late stage of waiting for his translation from the humiliating rank of midshipman to the glory of his first stripe.

‘It’s normal enough, of course, for the very young to be rebellious at what they consider unnecessary fuss,’ Midshipman Verschoyle, standing just to his left, murmured. ‘If you’re not a socialist at twenty, you’ve no heart; if you’re still one at forty, you’ve no head.’

Kelly Maguire frowned. The view that all men should be equal seemed at the moment to make very sound sense to a downtrodden snotty. His seniors, however, were doubtless Tories to a man and regarded egalitarianism as a dangerous new form of politics. Even James Caspar Verschoyle, Kelly’s immediate senior in the List, despite his cynical evaluations, was without doubt a hardened Tory who never suffered the slightest qualms of conscience.

The Twisting by Laurel Wanrow
The Marshal Takes A Bride by Sylvia McDaniel
The Marshland Mystery by Campbell, Julie
A Lady of His Own by Stephanie Laurens
Texas Cinderella by Winnie Griggs
Civilian Slaughter by James Rouch
The Nanny Piggins Guide to Conquering Christmas by R. A. Spratt
Confession by Carey Baldwin
Braided Lives by AR Moler
Breach of Trust by Jodie Bailey