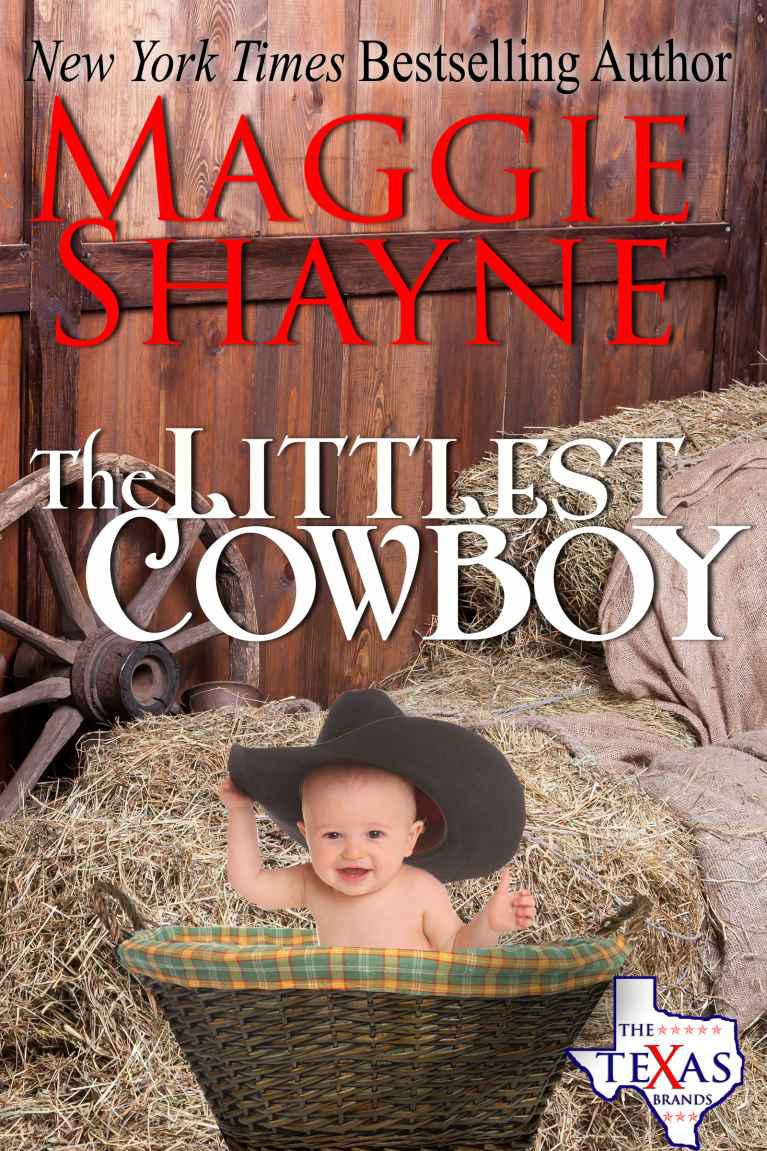 The Baddest Virgin in Texas

The Husband She Couldn’t Remember

The Baddest Bride in Texas

All rights reserved. Except for use in any review, the reproduction or utilization of this work in whole or in part in any form by any electronic, mechanical or other means, now known or hereafter invented, including xerography, photocopying and recording, or in any information storage or retrieval system, is forbidden without the written permission of the author.

G
arrett Brand awoke in a cold sweat, some foreign kind of dread gnawing at his stomach. Heart pounding, he sat up fast and wide-eyed, his fists clenching defensively before he got hold of himself. Blinking the sleep haze from his eyes and taking a few deep breaths, he let his tense muscles relax and unclenched his fists. There was nothing wrong. There was no reason for that panicky feeling that had slipped through him like a ghost slipping through a wall. No reason at all.

And still he couldn’t shake it. It hadn’t been a bad dream. Far as Garrett could recall, he’d been sleeping like a bear in January until that odd feeling had jerked him awake.

He sat in the middle of his king-size bed and scanned the room. Red sunlight spilled through the open window, but the curtains hung motionless. No breeze. Already the early-morning air grew heavier, hotter. He listened, but didn’t hear anything he hadn’t ought to. A horse blowing now and then. A handful of songbirds.

Still, the feeling that something was wrong remained. Garrett had never been much for ESP or any of that nonsense. But stories he’d heard about mothers knowing instinctively when something was wrong with their kids floated through his mind now. He was no mother to Wes, Elliot and Jessi. No father to them, either. But he was as close to a parent as they’d had in almost twenty years. He’d only been seventeen when Orrin and Maria Brand had been killed in that car accident, leaving him as sole caretaker to his five younger siblings. And when he thought about anything happening to any of them…

An odd sound reached him then, a sound that made the hairs on his nape prickle. Soft and faint, but out of place, whatever it was.

Garrett pulled on his jeans, socks and boots in the space of a couple of seconds. He didn’t bother with a shirt. But he did yank the revolver out of his top dresser drawer and gave the cylinder a quick spin to be sure it was loaded. On the way out, he snatched the black Stetson from the bedpost and dropped it on his head. It was a gesture so automatic it was done without forethought. Like breathing.

Softly, Garrett moved along the hallway to the next bedroom. He was glad of the braided runner covering the hardwood floor. It cushioned and muffled his steps. He stopped outside the door. Elliot’s room, though if you looked inside, you’d think it belonged to a ten-year-old boy, not a man of twenty-five. Lariats and spurs decorated the walls, along with a collection of hats and framed photos of champion cowboys. His closet was an explosion of fringed chaps and hand-tooled boots. Only the sizes had changed over the years. Elliot’s dreams never had. He’d lived for the rodeo since he’d been old enough to say the word.

Garrett held his Colt, barrel up in his right hand, and pushed the door open with his left.

The hinges creaked loudly when Garrett stepped through, and Elliot’s sleeping face twisted into a grimace. “Whaddya want?” he muttered, still half-asleep.

Relieved, Garrett stifled his sigh. “I thought I heard something is all. Go back to sleep.” He backed toward the door.

Elliot sat up, his rusty hair so tousled he looked like an angry rooster. “What the hell you doing with the gun, Garrett?”

“I told you, I thought I heard something.”

“So you’re gonna
shoot
it?” This as he climbed out of bed in a pair of baggy pajama bottoms with rearing mustangs all over them.

Garrett shook his head, not ready to discuss the odd feeling that had awakened him. “I’m going to check on the others.”

“I’m coming with you,” Elliot said with a pointed look at Garrett’s gun. “Just in case you’ve been so responsible and levelheaded for so long that it’s finally driven you over the edge.”

Garrett sent him a glare, but Elliot only returned a wink and a crooked grin as he grabbed his hat off the dresser and plunked it on top of his unruly red hair.

They slipped into the hall, and Garrett moved past the next two doors. Adam and Ben had gone their own way last year. Adam had hightailed it to New York City, ostensibly because of a job offer in some bigwig corporation. But everyone knew he’d really moved away because Kirsten Armstrong had left him at the altar to marry an older, richer man, and Adam couldn’t stand being in the same town with her anymore. Ben, of course, was trying to find some peace. The hills of Tennessee, where he was living like a hermit, wouldn’t heal him, though. Only time could do that, Garrett thought. Ben’s young wife had died just about a year ago, and even though they’d both known she was terminal before they’d married, the blow of finally losing her had almost done Ben in.

Garrett and Elliot reached the next room. Wes’s. If there were trouble, Wes was likely to be involved. Oh, he’d calmed down a lot since prison. But he still wasn’t over the anger of being sent there unjustly. It was a rage Garrett supposed would eat at a man for a long time. And with Wes’s temper…well, an explosion always seemed within shouting distance.

He tapped on the door, didn’t walk in the way he’d done with Elliot. Wes was still pretty riled up over returning home to find his half brother wearing a badge. And he’d developed a real touchy attitude about privacy, too, while he’d been away. No sense pushing his buttons by walking in unannounced, gun in hand.

The door opened and Wes stood there looking more like a Comanche warrior than a Brand at that moment, despite the jeans and pale denim shirt. His dark hair hung to his shoulders—longer than a man of thirty ought to be wearing it, Garrett thought—and his eyes gleamed like onyx. His Comanche mother had named him Raven Eyes, and Garrett had always thought it incredibly appropriate.

Garrett shrugged. “I’m not sure. Did you hear anything unusual just now?”

A high, soft sound interrupted Wes, and he went rigid. It seemed to come from farther down the hall, and all three heads turned in that direction. Jessi’s room. A second later, the three of them stampeded for their twenty-two-year-old baby sister’s door. Garrett saw Wes pull that damn bowie knife of his from his boot with a move so quick and smooth and practiced, it seemed to have just materialized in his hand.

They stopped outside Jessi’s door, and the sound came again. Not a normal cry. But obviously one of distress. Garrett’s blood ran cold when he tried the knob and found the door locked. He didn’t even think about it first. He just stepped back and kicked it open. Three Brand men exploded into Jessi’s bedroom at once, one holding a Colt, one wielding a bowie and the other poised with fists raised in a boxer’s stance, though the effect was probably ruined by the horsey pajamas.

Jessi screeched as she whirled to face them. Then she just rolled her eyes and shook her head. “You idiots! You almost scared me right outta my slippers!”

“Sorry, Jes,” Garrett told her, feeling more foolish by the minute. “I thought I heard—”

“Me, too,” Jessi said. “But it’s coming from outside.” She jerked her head in the direction of her open bedroom window.

Garrett lowered his revolver, sighing in relief. “You okay, Jessi?”

She only smiled and shook her short-cropped head in vexation. “How could I not be with you three on duty?” Giving her bathrobe sash a tug for good measure, she shouldered past them, apparently on her way downstairs to investigate the noise.

It was Wes who gripped her shoulder and gently stepped in front of her without a word. She made a face at him, but stayed behind him as they headed through the hall to the wide staircase and started down it, Wes and Garrett in the lead, Jessi and Elliot behind them.

“I think you guys are overreacting. Sounds like a lost calf or something.”

“Shh,” Elliot warned, but Jessi had never really known when to shut up.

“Garrett, you haven’t got the sense God gave a goat if you think anyone up to no-good would be lurking around the Texas Brand. Everyone knows you’re the sheriff.”

“Be quiet, Jessi,” Garrett ordered. They’d reached the bottom of the staircase. The parlor spread out before them, but there was nothing out of place. The huge fireplace they used only rarely. A wide picture window on the far left side that looked out over the lawn and the driveway, and the one on the back wall that faced the barns and unending, flat green fields beyond. They gave no clue. The knotty hardwood walls had nothing to say. The golden oak gun cabinet stood silent, its glass doors still locked up tight.

Blue wasn’t in his usual spot in front of the window, though. That alone signaled something wrong. That dog barely moved enough to breathe.

They continued on through the wide archway into the dining room and through that to the kitchen.

The front door loomed at the far end, and there was ol’ Blue, poised beside it. Not growling, though. His tail was wagging.
Wagging!
Hell, he was about twenty dog years past his wagging days. He stared at the door, tilting his big head from one side to another. His ears as perked as ears that long and floppy could perk. The two black spots above his eyes rose in question as if they were eyebrows.

Garrett tried to swallow, but it felt as if his throat were full of sand. He knew his family—and apparently his dog—thought he was overreacting, but he couldn’t shake this feeling, this ominous certainty that something
drastic
was about to happen. Something
horrible
must be awaiting him on the other side of that door.