The Long Journey Home (The Legend of Vanx Malic Book 8) 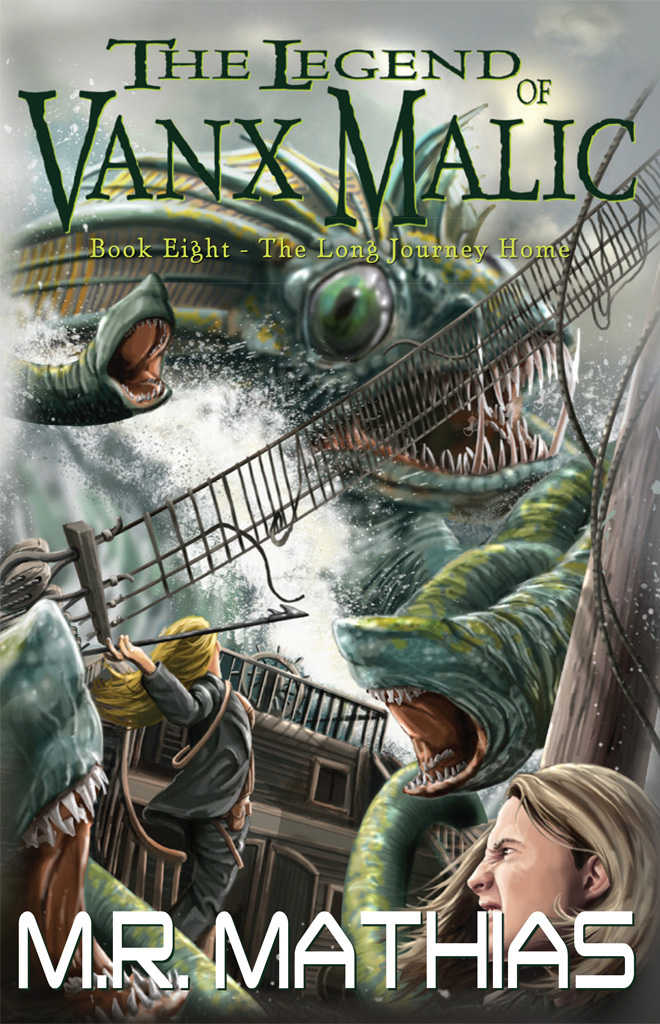 A special thanks to Jack Hoyle of
www.t-rexstudios.com
for the amazing cover art

The Sword and the Dragon

When the sky darkens

and the wild winds start to blow
,

you turn that ship right at the storm

and hunker down below
.

V
anx Malic stood at the rail above the ugly, battered, bare-breasted woman who formed the
Adventurer
’s masthead. Her blocky arms were thrown back so that they ran above the water line, and her hair formed a red, rising sun over her head.

She reminded Vanx of the Mysticas of legend: pale-fleshed women with blood-red hair. They were rare and feared, able to control dragons with their minds. They had been the most powerful users of any sort of magic, for their will alone could create monstrosities, but the elves hunted them all down and ended them eons ago. Or so it was said.

To passersby it must have looked like the masthead woman was doing the breaststroke. Painted stark white, with horrible facial features, the ugly, ill-carved thing was life-sized. It looked sort of like a pale, bloated, woman had been lashed to the small ship. This caused a few sailors and dockhands to turn their heads and stare when the group was easing out of Port Harthgar.

The ship was not bloated and ugly, though. The
Adventurer
was long and sleek. Its single mast was thick and tall and made from a single piece of unspliced tree trunk. The entire height of the mast—and every single beam, stringer, and rib below—was covered with powerful symbols that had been burned into the wood to bind it all.
The ship had been more or less given to Vanx by the crazy old wizard whose familiar Vanx had let free when he destroyed the Paragon Dracus and the Trigon regime, but it was his ship, for the elmwood name board from his father’s ship
Foamfollower
had been used to patch the transom.

A new coat of paint and the
Adventurer
would be as good as new, but even filthy and unused for decades, it cut the ocean soundly and didn’t creak and groan like many ships do when they get underway.

They were sailing under sea mage Castavonti’s power, for they were just now getting the sails unfurled, and testing the knots in the rigging and all the new fittings. But it wasn’t the wind and sails that had them moving. The sea mage and his ability to use the Wardstone to create thrust had them cutting a respectable wake as they went snaking out of the bay into the open sea.

Vanx was the captain, for it was his ship. He’d given Castavonti the wheel, though, and told him to figure out which deckhand would make the best second, for Vanx wasn’t planning on taking command unless there was a need for it.

The
Adventurer
was only sixty feet from bow to transom, but she was sturdy, and every fiber of her hull was filled with magic. The longer Vanx was on board, the more attuned to her he became.

Ronzon and Zirk, the two seamen they’d picked up, were both as competent as they’d boasted. Chelda and Master Ruuk leaned against the rail watching them, knowing that they would have to do those same duties sooner or later. Vanx had decided the newcomers would be loyal as long as they were paid fairly and treated well. That sort of thing went far with these kind of men. It would take longer for them to learn to respect Chelda, and the older Zythian, than the other way around.

Vanx and Zeezle would work circles around them, with ease, and put them in their place that way, but Chelda was as clumsy on deck as she was green. She was simply too big for the boat.

Master Ruuk felt any form of physical labor was below his station, which, by Zythian cultural standards, it was. But he agreed to pull his
weight. After all, the true captain of this ship was only half-Zythian, so Ruuk wasn’t as happy as he wanted to be. Had Vanx been full Zythian, he would have been obliged to cut Ruuk some slack.

Chelda fought seasickness and managed to keep her bile down. Zeezle was clearly hoping one of the seamen would say something about her and get walloped. Vanx kind of hoped so too, but they were wise enough to keep their mouths shut. She was a foot, or more, taller and a full grain sack heavier than either of the skinny sea dogs, and the hammer hanging at her hip was still caked in dried blood and gore from their recent battles.

“I’m serious,” Vanx said sincerely to his childhood friend. “I bought a flinging rod and a reeler.”

“Then toss it out, and let’s see if anything is hungry.” Zeezle followed Poops, who followed Vanx to the opening under the wheelhouse. It turned into a spiral stair as soon as one was inside it. Poops went down one cautious step at a time, which was just as well, for Vanx was handing the gear up to Zeezle to lay on the deck.

Vanx produced a wooden lure, painted a garish purple, with a blue-and yellow-feathered tail. It had a sharpened iron hook, as thick as a nail, strung through it. Poops had a hard time getting up the narrow stairs, Vanx saw, so by the time the dog made it back on deck, Vanx and Zeezle were letting thin woven line out from the back of the ship. Vanx was speculating what they might catch using this method. They were moving pretty quickly, so only a speedy predator had a chance. He also eyed one of the new guys—Zirk, he remembered, the skinnier of the two—watching him rig his line.

Vanx waited for the man to give him some sort of advice, but none came. Before long, though, Zirk was up in the rigging, watching from above, as the plug danced along the surface of the bright-blue, sun-drenched sea behind them.

To Vanx’s disappointment, after at least a full turn of the hourglass, there were no fish, not even a bite.

This time when Zirk climbed down, he fumbled through his belt pouch and produced a lure similar to Vanx’s, but this one had no fancy
feather or paint. It was just a skinny, cylindrical piece of wood, with an iron head and a rusty hook. Vanx would have disregarded the offer had the lure not had several sets of bite marks on it.

Vanx eyed it until Zirk offered it again, then he reluctantly began turning the wooden crank that retrieved his bait.

If you stand atop an earthy hill

and look into the breeze
,

don’t stand too long in that one place
,

Vanx was suddenly fumbling with the wooden crank handle of the reeler. The rod was bending so much it felt as if it would splinter apart. It was quite a battle, as the ship was under sail and couldn’t just stop. Castavonti did slow the craft a little, and after several attempts with the gaff, Ronzon dropped down beside Zeezle and took the tool from him. Vanx pulled the long, silvery mackerel alongside the boat again, and this time, with one deft heave, up came the fish, the gaff’s hook piercing cleanly through the meat directly behind its eye.

Ronzon dropped the flopping thing on the deck, and Poops darted in to attack it. It was all the seaman could do to clear the gaff and get the sharp hook out of the fish’s maw so the dog didn’t get himself hooked.

“Well, there’s supper,” Zirk said with a jagged, gap-toothed grin. “That one always works in a clear sea.” He indicated the plain wooden lure Vanx was holding. “I’d give it to you, but it was my pap’s. You can scrape all the color off of yours, and I suspect it’ll do the same sort of thing. I mean those fancy feathered ones are great when the water’s murky and all, but way out here, cedar is the way to go.”

Vanx was thankful for the fishing advice. He untied the lure and gave it back to Zirk.

Ronzon cleaned the fresh catch right there on the deck, letting Poops have the guts. Then he used a bucket with a rope and hauled up water to rinse the remaining entrails, head, and skin out a scupper and over the side.

When he took the meat down into the galley, no one stopped him, and soon the whole ship smelled savory. The smeared tangerine sunset was amazing to behold, and Vanx couldn’t remember a sea journey starting any better.

By this time, the harbor was far behind them, and there was no land in sight, which meant there was nothing man-made to hinder the spectacle’s purity. The deaths of the dragons he and Zeezle had come to know so well hung in the air like a fog, but even that sticky gloom couldn’t steal the beauty away from the horizon.

They ate fried chunks of mackerel with their fingers from a bowl that was passed around until it was empty. Then it was filled again, nearly emptied, and finally cleaned by Poops, who got the last few cooked bites, as well as the grease, from the tin dish.

The sun was disappearing, so lanterns were lit fore and aft, and all but the crew went below into one of three compact cabins to rest. Soon, Vanx would relieve the sea mage. Chelda and Zirk would work the sails for Vanx while the others rested, but with no ill weather ahead, and no obstacles, it would be clear sailing.

While they waited their turn, Vanx looked over the maps and charts that the dockmaster had placed on board. He was searching for one that showed the island on the map the strange old wizard had given him before they left. Even though he couldn’t find the landmass, he found where it should have been and drew it in himself from memory, all the while feeling the ship easing them off their current course to Orendyn toward the destination he was contemplating.

When Vanx finally took the ship’s wheel, he didn’t fight the vessel’s slight change of direction. The island on the wizard’s map wasn’t that far out of the way, a day or two at worst, and since the ship was leading them in the right direction, Vanx decided he would explain it all in the morning.