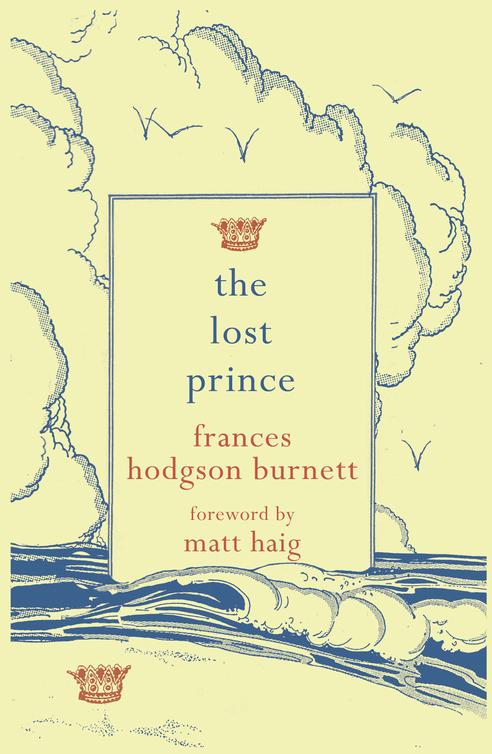 I first read Frances Hodgson Burnett’s amazing novel
The Lost Prince
when I was about eleven. I had chanced upon it at the library in Newark-on-Trent and started reading it not knowing anything about it. I’d probably read
The Secret Garden
by that point but I hadn’t made the connection that it was the same writer.

So I was coming to it like I came to most books back then, knowing very little about it except that the cover looked nice and the title had made me curious. And then as soon as I started reading, it had me hooked.

It transported me to a dreary, forlorn part of London (that somehow seemed an even worse place to live than dreary Newark-on-Trent), and into the life of Marco – the twelve-year-old boy who has arrived in London, whose father has been working to overthrow a cruel dictatorship in Samavia.

In London, Marco is an outsider. I liked outsiders. My other favourite book of that time was actually called
The Outsiders.
On the surface,
The Outsiders
– a novel about teenage gangs in 1960s Oklahoma – has little in common with
The Lost Prince.
Yet these equally absorbing novels are both about outsiders, and the idea of an outsider is appealing to everyone at every age, especially when you are young and fitting in is a matter
of intense importance. So we instantly warm to an outsider.

And Marco Loristan is certainly that. He was, we are told, ‘the kind of boy people look at a second time when they have looked at him once’. Tall and dark and broad he certainly looks different. ‘He was as un-English a boy as you could imagine’, in fact. A boy who not only looks different but actually, in many ways, is different. Not only is he from an exotic land, not only is he too big and too quiet, but he has also never settled anywhere long enough to feel at home there. (‘In not one of the many countries he knew had he ever met a boy whose life was in the least like his own.’)

For me it was always Marco’s character that made the book. The book is Marco to me. I was so happy when he made a friend – the urchin, Rat, who is literally of the streets, and who has never been anywhere but London. Marco was gently heroic, and kind, sharing some of the good qualities of Hodgson Burnett’s better known creation, Little Lord Fauntleroy.

The plot itself – involving the restoration of a fictional Eastern European monarchy – was unimportant to me, except that it gave Marco and Rat an excuse to have an adventure together. An undercover mission – a quest to find a secret society of Samavian patriots and to tell them to bring the royal family out of hiding.

Actually, reading that paragraph back to myself I realise this book sounds like something I really shouldn’t enjoy, especially as an adult. I mean, I really have no interest in whether fictional monarchies are restored in fictional countries. It is a book which would be easy
to dismiss as being out-dated and as a love-letter to monarchy. It is certainly near-impossible to imagine anyone writing this book today. And yet, it would be a real shame if such a story was never read again on those grounds.

I mean, for me, when I was younger, this story wasn’t about nationalism or kings and queens. It was about an outsider, who felt out of place and out of time, who finds a friend, and has an adventure. It was more about the ‘lost’ part of the title than the ‘prince’ part, if that makes sense. More about a boy who having been out of place in a city discovering he not only belongs to, but also rules a whole kingdom.

That at the time had the same power, I suppose, as that which millions of kids find in the story of an orphan who finds out he is an important wizard.

It is also a tale about self-esteem and believing in yourself, even if you feel like you don’t quite fit in, and that was a theme that had great power for me when I was eleven (in fact, what am I saying, it has great power for me now at the age of thirty-eight). Reading it again now, as a ‘grown up’, I also realise it is a great story about a father and a son. And just as the relationship between Marco and Rat is written with great affection,
there is a real human warmth to the affection he feels towards his father and that his father feels towards him. The son has respect for his father – which is something you might expect in a book written in 1915 – but what also comes across is that the respect is mutual.

The scenes in which Marco trains and teaches Rat and prepares him for the mission are a particular treat. After a bit of physical exercise on Hampstead Heath they go back to Marco’s run-down house and sit and chat. Neither of them minds that the house isn’t up to much, with its ‘poor bed’ for Marco and ‘hard sofa’ for Rat to sleep on, as ‘neither of them was conscious of the poorness or hardness, because to each one the long unknown sense of companionship was such a satisfying thing… they told each other things it had never before occurred to either to think of telling anyone.’

This chapter – called ‘Only Two Boys’ – illustrates the heart of this book.

Rat has terrible self-esteem issues. After all, it isn’t easy being a lowly street urchin who worships the aristocracy. But Marco helps him believe in himself, in this chapter as elsewhere. He tells Rat that he has a big brain and a strong will, and reminds Rat that he has a great memory.

Rat also admits to being jealous, but Marco rather wisely tells him that jealousy is always a ridiculous thing to feel. Rat wonders if Marco is jealous of other people claiming Marco’s dad’s attention. ‘No, I’m not…The only thing I care for is – is him. I just care for him.’ And then, a little later, he tells his friend something pretty wise.

‘You choose your side,’ he said. ‘You either build up or tear down. You either keep in the light where you can see, or you stand in the dark and fight everything you see because you think it is an enemy. No, you wouldn’t have been jealous if you’d been I and I’d been you.’

They may only be ‘just two boys’ but if they train hard and work hard they can be ready for anything, when the time comes.

And of course, the time comes, and it is hardly a spoiler to say that they prove their worth. But as with life, it is the journey itself that is more important – at least for the reader – than the journey’s stated purpose to help save Samavia.

It is a journey not only filled with adventure, but also beauty, and just as Marco teaches Rat to have self-esteem and to be patient, the journey itself seems to be one on which they both change, and become more appreciative of life and the present moment. The world is not all like the shabby one they have known in London and elsewhere. There is beauty here too.

‘They saw the sun go down,’ Hodgson Burnett writes in one especially evocative scene. ‘and shade by shade, deepen and make radiant then draw away with it the last touches of colour – rose-gold, rose-purple, and rose-grey. One mountain top after another held its blush a few moments and lost it. It took long to gather them all but at length they were gone and the marvel of night fell.’

There is a timeless story here, beneath all the Edwardian values, and one with things to teach us still. A story of family, and travel and adventure, filled with
bravery and wonder and love. Ultimately though it is the story of Marco and his friend, and how – no matter how lonely or different we may feel – there is always a cause and a companion somewhere out there that will make us feel at home.

It is a classic story from a classic writer and one full of hidden treasures.

Give Me All Of You by Beazer, Delka
The Lion Who Stole My Arm by Nicola Davies
Black Market Baby by Tabra Jordan
How to Keep Your Volkswagen Alive by Christopher Boucher
Hall, Jessica by Into the Fire
Becoming Carter (The Carter Series) (Volume 2) by W. S. Greer
Stolen by Jalena Dunphy
Sisters by Lynne Cheney
The Transvection Machine by Edward D. Hoch
ANOTHER KIND OF DIAMOND by Gloria Obizu