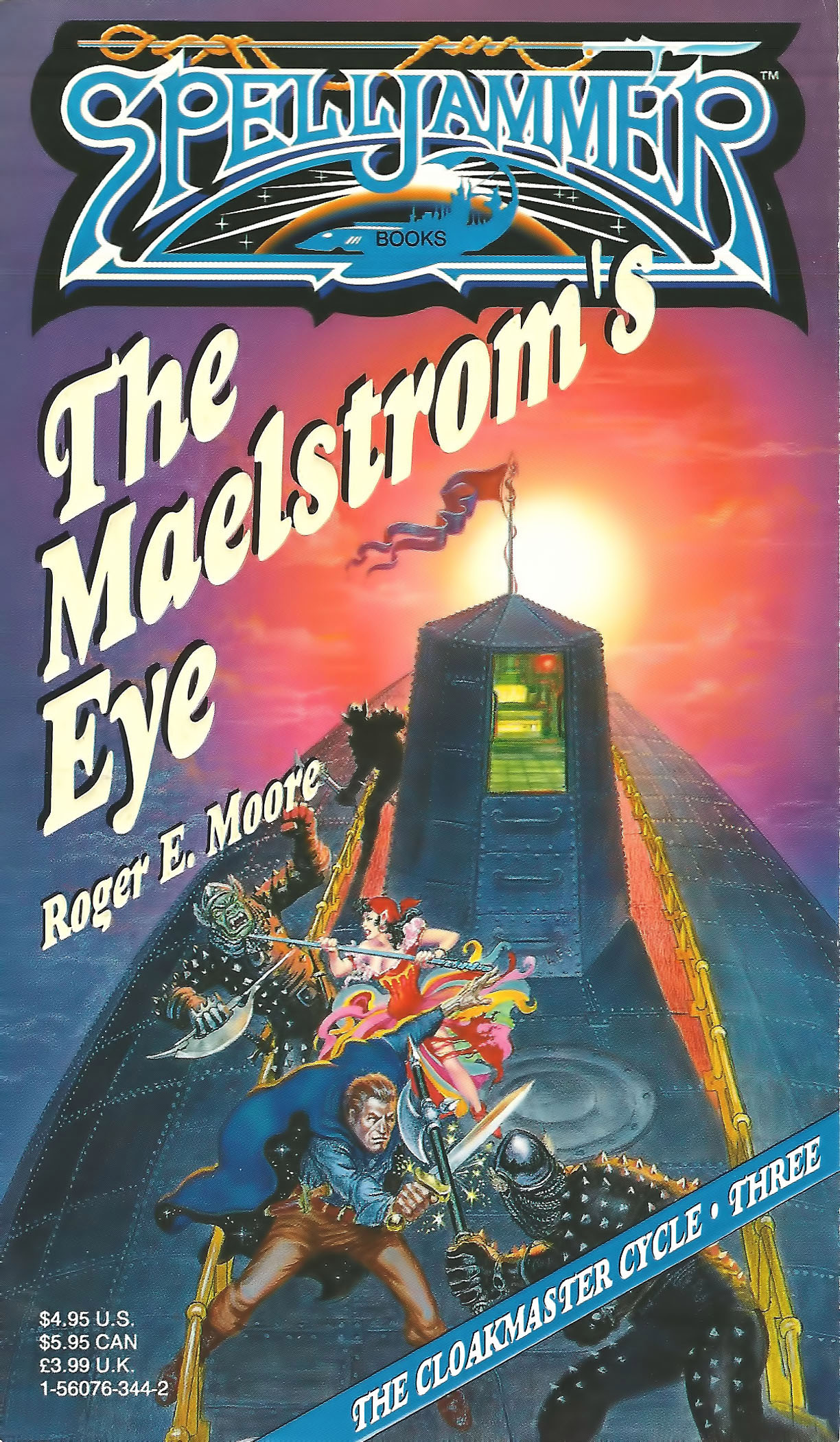 All characters in this book are fictitious. Any resemblance to actual persons, living or dead, is purely coincidental.

This book is protected under the copyright laws of the United States of America. Any reproduction or other unauthorized use of the material or artwork contained herein is prohibited without the express written permission of TSR, Inc.

Random House and its affiliate companies have world wide distribution rights in the book trade for English language products of TSR, Inc.

Distributed to the book and hobby trade in the United Kingdom by TSR Ltd.

To everyone one in the Milwaukee Aikido Club,

who put up with my absences for the

sake of this book, and

The beholder’s yellow central eye still bore the gleam of fanaticism, even in death. Its wild gaze, undimmed by the passing of years, looked down at Teldin Moore as he walked past the guild hall where the beast’s spherical body was mounted over the main doors. Teldin’s mouth went dry when he saw it, and he couldn’t help but stare.

A thick wooden beam ran through the back of the beholder’s round body for support; the ash-gray creature was wider than a man’s reach with both arms. The dozen eyestalks on its top were cracked in places, some revealing the iron rods that supported the fist-sized eyeball at each stalk’s end. Teldin tried to imagine what the ugly beast had been like in life, before it had met its final opponent and was turned into an advertising sign.

“That’s Graffin the Gray,” said the big, blond-haired warrior at Teldin’s side. Aelfred Silverhorn gave a lopsided grin at the stuffed monster. “He’s been there as long as I can recall. Quite a looker, isn’t he? He used to attack shipping near the Rock. It took three shiploads of men to kill him, and he disintegrated one of them before the other two finished him off from behind.”

“Interesting,” said Teldin, finally looking away to watch the thick street traffic around them as they walked on. He pulled his royal blue cloak closer around his shoulders. “I wouldn’t like to meet one of those here.”

“There is one good thing about beholders,” Aelfred replied, his eyes sparkling. “Given the choice, they’ll kill each other long before they’ll kill us. But they’re not going to give us any trouble here, old son. There’s one beholder who does live here, but Luigi’s all right. He’s a bartender. The Rock of Bral’s just a calm, run-of-the-mill place.”

As he spoke, the big man made way for a pair of grunting, red-haired gorillas in rainbow-patterned robes, each sorting through fruit in a streetside bin. Teldin tried hard not to stare as he and Aelfred walked past them, but Aelfred never gave them a second glance. “The Rock isn’t very big,” he continued sagely, scratching his broad chest through his loose black shirt. “Still, damn near everyone in the Known Spheres comes here eventually. Politeness is the rule. You might have your pocket picked, but the picker’s in more danger than you are.” Out of long habit, Aelfred let one hand stray to the money pouch on his thick brown belt, then dropped his hand when satisfied of the pouch’s safety.

Teldin nodded blankly, looking back at the red gorillas for a moment. Each wore two huge swords in crossed scabbards on its back and probably weighed as much as three adult men. Their huge chests and thick forearms were an effective promise of their talents. By contrast, Teldin’s work-hardened frame looked weak indeed.

Aelfred raised a thick-knuckled hand and pointed up the street. “The Greater Market’s right ahead, around the corner, where that cyclops is going – the one with the head horn, not the bald red one.”

Teldin Moore looked in Aelfred’s direction and started to say something, but the sight of two Cyclopes at once among the crowd caused his thought to trail away. He’d never seen a cyclops before, much less discovered that Cyclopes came in different sizes and shapes. His blue eyes widened at the sight, but he was slowly becoming accustomed to being surprised.

“The market can be a rough place,” said Aelfred, warming to a memory. “I heard a story about a goblin here who tried to cut the purse on this merchant, only to find out that the merchant was an illithid. The illithid mind-controlled the little guy, then made the goblin take its dagger and cut out its own —”

“Aelfred,” Teldin said abruptly. He was already able to visualize the rest of the gruesome tale. “You told me you’d heard that the elven Imperial Fleet was here, but you didn’t say anything about exactly where it was. I haven’t seen any elves wearing that silver fleet armor you described.”

“Oh, the elves are here, all right. The first mate on the Drunken Kraken, in the dock next to ours, said that his sister, who’s a helmsman on a freighter out of Toril, once met this gnome who said the elves had an admiral or two here on the Rock. Their embassy is just a small one, up in the forest I pointed out when we were coming in. The elves had the trees imported to make a little bit of home for themselves. The forest is just beyond the Greater Market, a little ways up toward the prince’s palace over there.” Aelfred pointed in the same direction as before, his finger elevated toward an illuminated tower shining against the black, star-filled sky.

They walked on together in silence, Aelfreds tale about the unfortunate goblin thankfully dropped. Hundreds of white, gull-like birds – Aelfred called them gullions – wheeled and cried above them, sailing against the starry darkness like winged ghosts. In a few moments, the two men rounded the corner and came to a stop.

Teldin gaped, then closed his mouth. For perhaps a tenth of a mile ahead of him lay a shifting sea of humans and other beings, their voices filling the open square like roaring surf. Teldin rubbed his bristly mustache as he surveyed the rolling chaos before him.

An arm’s length away, a huge giff in a green military uniform drank from a great pewter tankard as he walked by, his normally blue hippopotamus face now a warm purple. A brown, waist-high halfling with curly black hair and a bright yellow outfit argued vehemently with an overweight albino human, the latter in a black robe belted with a live white serpent. A shoulder-high elf wearing only deerskin trousers and moccasins, his face and chest tattooed with fine green whorls into patterns of trees and leaves, examined the wares of a leather-goods booth. Behind the booth’s counter was a sad-eyed, winged baboon-woman in a toga of white silk, whose two hair)’ children shouted creative insults at passersby. A stone’s throw to his right, seven colorfully dressed aperusa, human gypsies whose handsome, tanned skins shone with sweat, entertained the crowd for coins. The men played mandolins and tambourines as the women danced and laughed. On and on went the sights, across dozens of races, scores of languages, and hundreds of beings stretched over the whole of the marketplace.

Teldin smelled the heavy, sweet perfume of the aperusa women, the scent mixing with that of curried meats from a nearby food vendor, the citric odor of a pulpy green fruit crushed on the paving stones, and the smell of potent beers and ales. It was a place once beyond his imagination.

“Doesn’t look like much is going on today,” said Aelfred, surveying the crowd with a bored gaze. He shrugged and glanced at Teldin. “You want to find the elves on your own, or you need a hand?”

“I … I’ll be fine.” Teldin recalled with an effort the details of his mission to the Rock. “Let’s meet at the
Probe
later. I could be quite a while, so I can’t say when I’ll get to the ship.”

“Take your time,” said Aelfred. “I’m going to look up some old friends and get another cask or two of sagecoarse for the saloon.” He gave Teldin a nudge in the ribs with a rock-hard elbow. “Maybe you can find a trinket for Julia. Women love that, even the warriors – sometimes especially the warriors.”