The Mayor of Lexington Avenue 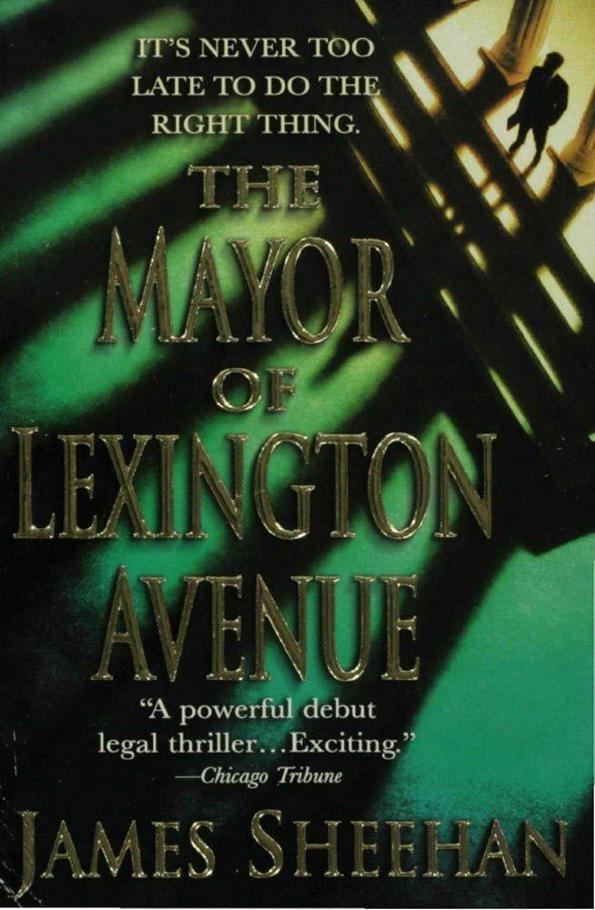 Praise for
The
MAYOR
of
LEXINGTON AVENUE

“James Sheehan observes the conventions and boldly expands them in [this novel], which gets the blood up. . . . Sheehan, a trial lawyer in Tampa, writes with bleak clarity when he’s sharing the dirty tricks of his trade in the harrowing trial scenes, but there’s a touch of the poet in his voice.”

“This is a debut novel, but it reads like it was written by a master of the genre.”

“Sheehan’s powerful debut . . . reads like
To Kill a Mockingbird
on steroids.”

“Not only is this a top-notch legal thriller, it’s also a moving story about love, guilt, personal redemption, and friendship. Sheehan is a truly gifted storyteller, and the novel’s format is fresh and clever . . . This is a terrific novel, a genuine literary achievement.”

“This first novel has all the ingredients of a satisfying page-turner . . . and an added plus: intelligent commentary about the inherent flaws of the capital punishment system.”

“[A] fierce and masterful piece of work.”

This is a work of fiction. All of the characters, organizations and events portrayed in this novel are either products of the author’s imagination or are used fictitiously.

THE MAYOR OF LEXINGTON AVENUE

All rights reserved. No part of this book may be used or reproduced in any manner whatsoever without written permission except in the case of brief quotations embodied in critical articles or reviews. For information address St. Martin’s Press, 175 Fifth Avenue, New York, NY 10010.

In memory of my parents,
Jack Sheehan and Mary Tobin Sheehan,

who gave me everything in my life
that I needed to succeed—unconditional love.

You are always in my heart.

Lucy liked to fish in the daylight. She enjoyed seeing her prey, but it was even more important that they see her. Focus their eyes on the feast while she set the hook ever so gently. She hooked Rudy the first time she walked into his store in her dungaree short-shorts and tight tank top.

“Hypnotize ’em and hook ’em,” she would have told her class if she had taught the sport. Rudy could have been exhibit number one. He couldn’t keep his eyes off her and he couldn’t hide it either. Luckily there was only one other customer in the store, an old man Rudy rang up without so much as a glance. Lucy could tell she had him without even looking.

“Weight on the line. That’s how you do it, ladies. It’s all feel. And be patient. Don’t yank too quickly or he’ll get away. Let him run a little till he’s out of breath. Then you’ve got him. Catch him first—you can always throw him back.”

Rudy could have done some fishing of his own if he’d known how. Unlike Lucy, who packed it all into a small, tight body, Rudy was tall, the olive skin of his chiseled face punctuated with fierce brown eyes and framed by thick, coal black hair that shone like silk—hair that women dreamed about for themselves. Lucy wasn’t the first woman who had tried to hook young Rudy. They came in every night to the convenience store where he worked, every shape and size and age, but Rudy had been oblivious until now.

Lucy did that to the men from the barrios wherever she went. This one was on the outskirts of Bass Creek, a small town in the central portion of Florida just north of Lake Okeechobee. It was populated by Mexicans, Colombians, Indians, Puerto Ricans—mostly pickers, mostly seasonal. They lived in single-wides or housing provided by the growers—cinder block shacks with running water.

But Rudy didn’t live in the barrio, he wasn’t seasonal and he wasn’t a picker. He had come to Bass Creek with his mother, Elena Kelly, when he was a boy. They had lived in a run-down motel for a while until Elena got a job as a maid at the Bass Creek Hotel, the largest hotel in town, located just under the new bridge over the Okalatchee River.

Everybody liked the idea of the new bridge when word got around that they were going to build it. The old drawbridge was ugly, slow and cumbersome and it caused backups every fifteen minutes as it raised and lowered for the steady flow of river traffic. The new bridge would be modern and sleek and high enough so even the largest sailboats could cruise by unimpeded. The new bridge was supposed to provide local jobs and money. Unfortunately, it didn’t work out that way. Outside contractors were hired for the construction and brought their own people. Those workers stayed during the week and filled up the hotels but they were a vile lot, drinking and fighting and abusing the town. Elena, who was probably the prettiest woman in Bass Creek, had to stay hidden behind a locked door after dark. Rudy saw the change in her but never really understood it.

When the bridge was finally completed, the workers left and the cars flew by in one continuous stream. No need to stop anymore to let the highway of sailboats pass. No need to pull into this little town to browse, or eat, or perhaps spend the night. Bass Creek had been a rest stop on a friendly stream for tourists on their way to Miami or Fort Lauderdale. The old bridge had been the comma that caused those tourists to pause. Now the pause was gone, and the folks of Bass Creek who didn’t own orange groves, who survived in the service industries, took the brunt of the loss.