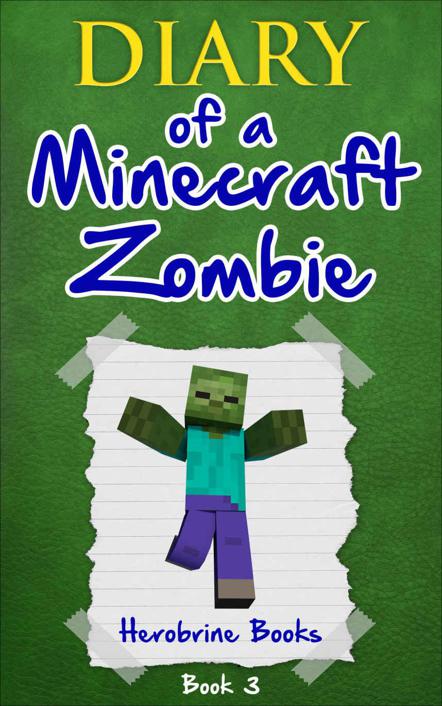 Leave Us a Review

Check Out Our Other Books from Herobrine Books:

All rights reserved. No part of this publication may be reproduced, distributed, or transmitted in any form or by any means, electronic or mechanical, including photocopying, recording, scanning, or by any information storage or retrieval system, without the prior written permission of the publisher, except in the case of brief quotations embodied in critical reviews and certain other non-commercial uses permitted by copyright law.

This unofficial Minecraft novel is an original work of fan fiction which is not sanctioned nor approved by the makers of Minecraft. Minecraft is a registered trademark of, and owned by, Mojang AB, and its respective owners, which do not sponsor, authorize, or endorse this book. All characters, names, places, and other aspects of the game described herein are trademarked and owned by their respective owners.

I can’t believe it.

Mom and Dad just told me that they’re taking us to the Jungle Biome for Spring break!

The Jungle Biome is like the coolest biome ever.

Best of all, it’s got the best Amusement Park in the entire Overworld.

They’ve got the best minecart rides.

They’ve got the Wicked Twister, and the Head Ripper…

And, they have the scariest ride ever known to zombie-kind called, The Zombie Thrasher.

Man, it’s going to be the best Spring break ever.

The only thing I have to worry about is that my little brother is coming too.

I was trying to tell my Mom and Dad that little brothers aren’t allowed in Creepy World, because it may give them permanent brain damage.

But I think it backfired, because they got really excited after I said that.

Then I tried telling them that they didn’t have rides for little kids. It was all for 7 year old kids and above.

But they started talking about the “Zombie Minion Madness Ride,” or the “It’s A Small Zombie World” ride…

They even said that there’s an entire section of Creepy World for kids called “Zombie Kiddieland.”

I was out of ideas, so I guess the little wart is coming to Spring break scarecation with us after all.

But, I don’t care because it’s going to the best Spring break ever!

All the kids at school were talking about where they were going for Spring break.

As soon as I told them I was going to the Jungle Biome, their eye sockets got real big, and their jaws dropped. Some of them even started drooling…

I finally started to get some respect in the classroom.

That was until Big Mouth Jeff opened his mouth and told everybody he was going to the Ocean Biome.

He said that his family was going to spend a week at the Ocean Monument Hotel and Amusement Park.

All the kids forgot about me and started gawking and drooling at Jeff.

Something tells me that Jeff is making it up, though.

I mean, Zombies aren’t supposed to be able to breathe underwater.

But who knows. He probably has an uncle that invented some kind of underwater Zombie suit that helps zombies breathe underwater. And I bet that Jeff has like three of them.

Some Zombie’s get all the breaks.

I asked Skelee, Slimey and Creepy where they were going for Spring break.

“Me Either.” Slimey said too.

“I’m going to find out this week.” Creepy said. “But I just hope it’s not the Jungle Biome. The way you talk about it, it sounds really scary.”

“It sure would be cool if we could all go to the same place for Spring break.” I said. “Then we can have all kinds of fun together.”

“You should tell your Mom and Dad to call our parents. That way we can all go to the Jungle Biome with you.” Skelee said.

We finally got him to come by promising him that we wouldn’t let him get on any scary rides.

But somehow we convinced him to go to the Haunted House.

I walked my ghoulfriend Sally to school today.

I asked her if she wanted to come to the Jungle Biome with me and the guys for Spring break.

But she said she had to go with her Mom and Dad to their house in the Snow Biome.

“Wow, your parents have a house in the Snow Biome?”

“Yeah, we have a house in just about every Biome.” Sally said.

“Wow, your parents must be rich.” I said.

“Yeah, my Dad made a lot of money during the last Zombie Apocalypse.” She said. “His company supplies armor for the Zombie Army.”

“But aren’t you afraid of Snow Golems?” I asked her. “The kids at school say that they’re worse than Iron Golems.”

I told her how one time, a kid at school had an uncle that got caught by some Snow Golems. They used his head and his limbs to play a game of snow baseball. If an ice cream truck hadn’t come by, he would’ve never escaped.

“Oh silly, those are only stories.” She said. “Snow Golems only bother us if we go next to the human village. Our house is way on the other side of the mountain.”

I told her about all my plans, and about Creepy World, and about the Zombie Thrasher, and about my little brother, and the guys coming to Jungle world with me, and about my mom taking me to get new clothes; and…

Man, I thought Sally was the one that talked a lot.

Today our Scare Class took a trip to go see some cave bats.

I think cave bats are dumb.

All they do is fly around and make noise.

But they don’t do anything cool, like Killer Rabbits, or Ghasts and stuff.

But anyway, we went through some caves to find the bats. But we didn’t find any.

So me and the guys decided to do some cave exploring.

Ms. Bones let us go exploring as long as we followed her one rule, “Don’t bother the cave spiders. You know how upset they can get.”

Me, Skelee, Slimey and Creepy went into this really dark cave.

“HISSSSSS.” I could already hear Creepy getting nervous.

But we saw a light up ahead, which calmed him down.

The light led us to an abandoned mineshaft. It actually looked like somebody was recently working there.

“Hey, this reminds of a movie I saw last night.” Skelee said. “It was called Indiana Bones and the Temple of Doom.”

“It was really cool. The best part was when Indiana Bones jumped into a minecart and rode really fast like a rollercoaster.” Skelee said.

All of us jumped into the minecart and pretended we were on a giant rollercoaster.

“Aw, just sit in the back of the cart if you feel queasy.” We told him.

Creepy went to sit down, but as soon as did, his foot kicked the brake lever.

All of a sudden the minecart goes up through a few caves until we reached the top of the mountain, then “Whhhooooosssshhhhh!!!!”

The minecart was going about a hundred miles an hour down the mountain and through the caves and all around the abandoned mineshaft.

We looked at the back of the minecart, and Creepy was gone!

All of a sudden we heard a loud, “BOOOOOMMM!” from where we came from.

“Oh No…You don’t think?” Skelee said to me with a worried look on his face.

I just looked at him scared.

Then all of a sudden we slowed down as we came to the end of the mineshaft.

“Oh Man. What are we going to tell Creepy’s parents?” Skelee said.

We all walked back to Ms. Bones’ class, with our heads hanging low.

When we got to Ms. Bones’ class, she scolded us for taking so long.

“Ms. Bones. We have to tell you something…It’s about Creepy…” I said.

All of a sudden Creepy comes out of nowhere and says, “Hey guys, how was the minecart ride?”

Me, Skelee, and Slimey just stood there with our mouths open.

“We thought you blew up! What happened to you?”

“Well, as soon as the minecart started moving I fell out. Actually, I got lost. I accidentally ran into a cave full of TNT. Then I…Uh…accidentally activated one. If it wasn’t for the cave spiders I would’ve been blown up for sure.” Creepy said.

“How did you escape?”

Skelee sighed and said, “Man, I wish I could ride a cave spider…”

Today Mom took me to get some new school clothes and some clothes for our trip to the Jungle Biome.

I was really excited.

I wanted to get some of the coolest clothes that the kids at school were wearing.

Well, everything was going great until I found out that Mom decided to take us to Creep Mart to get my new clothes.

I was hoping she was going to take me to “Scarget,” or “Old Scary Navy.” Even “Rabies R Us” would’ve been better than Creep Mart.

Then when we get there, Mom goes ahead and picks out all of my clothes. Then she made me try them on.

“Mom, I look like a dork!” I said, after looking at myself in the mirror.

“But I thought that’s what all the kids at school are wearing nowadays?” She said.

Man, Moms don’t know anything about picking out cool clothes.

Slimey’s Mom bought him some new school clothes this year, and on the first day of school, all of the mob kids laughed at him.

I laughed too. I couldn’t help it.

Slimey really tried to rock those parachute pants, but it just didn’t work.

Another time, Skelee’s Mom made him wear jeans with stripes on them. All the kids said they made him look really skinny.

Well, I’m not going to let that happen to me. No way!

“Mom, I’m twelve years old. I’m old enough to pick out my own clothes.” I said.

“You’re right honey.” She said. “Oh My little Zombie is growing up so fast.” Smmmaaccckkk! She kisses me in front of all the people at the store.

Then I picked out some clothes that I thought would really make me look cool.

“Yeah, just right.” I said, as I looked in the mirror.

My Mom kinda looked at me funny, but she didn’t say anything because she knows I’m a big Zombie now.

And afterward we went to get cookies and ice cream…