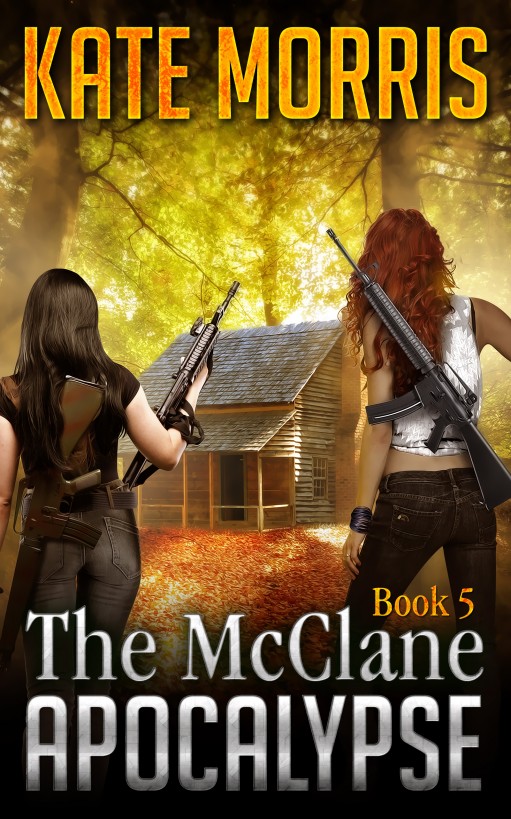 Note to Readers: This publication
contains the opinions and ideas of its author. It is not intended
to provide
helpful
or informative
material on the subjects addressed in the
publication
. The author and publisher specifically
disclaim all responsibility for any liability, loss or risk
personal or otherwise.

All rights reserved; including the
right to reproduce this book or portions of
thereof
in any form whatsoever. For information,
email: Ranger Publishing @gmail.com.

Ranger Publishing can bring authors to
your live event. For more information or to book an event, contact
Ranger Publishing @gmail.com or
contact the
author
directly through KateMorrisauthor.com or
[email protected]

Manufactured in the United States of
America

Library of Congress Cataloging-in-Publication
Data is on file

For the lions who went out in defense
of our freedom and never came back, I dedicate this
McClane
to you. Thank you for your
selfless sacrifice and my freedom.

The surrounding forestry is becoming
more recognizable. He’s on McClane ground again. There is a comfort
in the familiarity, a solace that he’s on the right track. The
Ohio
armory
group, Jackie
especially, hadn’t taken it well that he was leaving. But he wasn’t
leaving them forever.

A few days before he left, he’d called
a meeting to discuss his departure. He told them who he really was,
gave them a brief history of his family and the farm. Then he asked
them if they’d like to move to Pleasant View. Cory was surprised
when only about ten people wanted to go. He suggested that they
shouldn’t split up the group, that strength in numbers was
important, but some of them didn’t want to leave the safety of the
armory. Others were from the area and were hoping that their
families would return someday. Cory understood their plight but had
tried to get them to see
reasoning
in the fact that they should be practical and leave for a
much safer place. Many still hadn’t wanted to leave their safe
haven. Jackie and her son agreed to leave, and that’s all that
really mattered. He hadn’t wanted to leave her in a situation that
would’ve given him residual guilt. Cory doesn’t have romantic
feelings for Jackie, but he likes her well enough. She’s smart,
savvy and, unfortunately, very vulnerable. Her heart is in the
right place, but she’s very trusting, too trusting. Hell, she
hadn’t known him at all and had introduced him without question
into her group. Her life in the apocalypse has been sheltered. She
can’t believe some of the horrific stories he’s told her about how
bad it is out there. Sometimes she reminds him of a gullible child.
Her little boy is just as innocent. Cory doesn’t want to consider
them being harmed. He’s not sure the remaining people at the armory
will survive. It takes a lot of work to gather food, forage, farm
and keep up on security.

He’d worked on getting the deuce and a
half ready and running, had gone on runs to salvage and steal gas
and a few parts, and helped them load it full of supplies. It had
taken him a few days, but he’d managed to find a rifle and two
handguns that fit the ammo he’d discovered in the bunker. Cory
hadn’t wanted to leave the stragglers behind without more weaponry.
A shotgun and a .22 pistol weren’t much to defend themselves if
they should be ambushed in their remote location. He’d loaded
enough food for their trip and cans of ammo onto the truck along
with the few meager possessions of whoever was going. Then he’d
told them to give him a
four-day
head start before he took off on his horse for Tennessee.
He’d like to beat them there so that he can explain to the family
and the people
in
town that he’s
bringing new people in. New people are not always a welcome sight,
and he’d like them to be warned
by
him of the impending arrival. He knows Jackie’s group will
likely need to stop frequently and that their travel will be slow.
He warned them where to avoid and where it was likely safe to stop
for breaks. They are traveling with women, children and older
people. He was pretty sure even on horseback that he’d beat them
home.

He’d made love to her the night before
he left and kissed her goodbye in the morning. He’d said his
farewells to the rest of the group, as well. He had also made sure
that she knew how to use the Glock 9
mill
pistol he gave her and made her promise to
keep it on her in the truck at all times. He hopes that his words
sink in because he doesn’t want anything to happen to her or the
rest of their small group. They are good people who deserve a
second chance.

Damn Dog trots beside Jet, wagging her tail
happily as if she too knows they are almost there. She has never
been to the farm, but Cory’s sure that she must be picking up on
his anticipation and eagerness. He passes the first series of human
traps that they’d set up years before. Then he carefully avoids a
trip-wired area. He pulls his radio out of his saddlebag and calls
ahead.

“Tango Three to Bravo One, come in,” Cory
says into the small box.

He doesn’t get a response. It’s possible that
his batteries are dead. It’s not like he’s had a chance to charge
them in the last eight months. August had come and gone quickly
while living at the armory. It’s now the middle of September. The
family will need his help to bring in the harvest. This fact and
his talk with the hooch maker had pushed him to the decision to go
home.

“Tango Three to Bravo One, come in,” he
repeats. Nothing. That’s strange for sure. His battery pack seems
to be working. He’s got a tiny red light indicator in the
right-hand
corner of the
walkie-talkie.

The hair comes up on the back of his neck as
he starts imagining the worst. It’s the middle of the day, not even
dinner time yet. They should be there. Someone should have
answered, and this causes his stomach to do a sickening flip. Has
something happened to them? Has someone overthrown their farm and
killed them?

Jet snorts and tosses his head beneath Cory.
Likely he is just picking up on his master’s mounting tension. He’s
less than two clicks out now. The barns should come into view soon.
Damn Dog stops dead in her tracks and growls. Shit. Something’s
definitely wrong.

Cory yanks Jet to a
stop,
jumps from his back and flings the reins over
a tree branch near the path. His dog cries once in
agitation.

“Stay,” he tells her. She whines. “I
said stay.”
This time,
his tone
is firm, almost scolding. He doesn’t need the dog running ahead and
alerting anyone to his presence. She lays down next to the horse as
Cory pulls his rifle free of the scabbard.

He starts forward on foot, moving
cautiously. He comes to the next
trip-wire
and steps carefully over it. He sure as
hell isn’t going to go blasting through the woods like a noisy oaf
should someone be near. He stalks quietly and slowly, methodically
making his way closer to his home. A cow
moos
in the far distance. He knows that it’s from
their farm. He’s close.

When he crests the next small hill, he spots
movement at the bottom of it near the creek. Cory hits the deck. He
pops his head up quickly for a sly peek. Good. The person near the
creek has their back to him. The sun casts a glare, making the
person nothing more than a shadowy silhouette. He doesn’t look
particularly big, but Cory isn’t taking any chances. He’s going to
sneak in and take him by surprise.

Spotting no other men gives him a bit more
courage. Getting to his feet, he comes about just slightly and
flanks. He purposely slides four feet down the steep hill, making
as little noise as possible as the fallen leaves cover his shuffle.
Then he stalks closer. When he’s within ten feet, he decides to
announce his presence.

“Hey, motherfucker, trespass much?” he calls
out angrily. His family could all be dead because of this prick.
None of his family is anywhere around. This is definitely not one
of the family.

The man spins about in shock, even
stumbles and falls down on his butt. However, it’s not a man. It’s
clearly a woman. She wears a blue bandana on her head, tied around
her forehead holding back her hair like Aunt Jemima. Except
that
she’s not a cherubic black lady on
a syrup bottle. She’s a tall, skinny redhead with light-colored,
cold eyes. Cory takes a second to peruse her from head to toe. She
jumps to her feet with a frightened cry. Then she takes off.
Damn!

“Let me go!” she yells at him from her face
down position.

Cory flips her over easily enough. She’s
scrawny, so it’s not hard to do. Her hands lash out, slapping at
him with lightning speed. When that proves ineffectual, she tries
clawing at his face. She manages to lash him with one full slash
across his right cheek. She’s drawn blood. He can tell by the
stinging pain.

“Get off, asshole!” she screams.

She wriggles her skinny
arm
free of his grasp and goes for the
pistol on her hip. Cory grabs her wrist and painfully bangs it on
the ground until she releases her gun.

She pulls her tiny wrist free and punches him
in the side of the head. He knows that it hurt her knuckles. It
certainly didn’t hurt his hard head. Cory manages to capture both
of her free hands and pin them above her head.

Nice. Her hair is as colorful as her
language.

She whips her head to the side and won’t look
at him. Cory simply grasps both of her thin wrists in his one palm
and turns her stubborn jaw with his other. He’s hit with a pair of
light grayish blue eyes that are on fire with anger and fear. Pale
red eyebrows frame her light eyes.

“Fuck you, asshole,” she says in a quieter
tone. “If you’re gonna rape me, then just do it, you prick.”

“I ain’t gonna rape you, ya’ bony bitch,”
Cory tells her angrily. Why the hell would he rape her? Well, in
her defense, he is laying on her, one leg in between hers. “What
are you doing on this property? Who’s gonna kill me? You with
people?”

“Oh, you have no idea what kind of people I’m
with, asshole,” she promises.

A sprinkle of tiny brown freckles
litter her nose and the apples of her tanned cheeks. Her cheekbones
are high and hollow beneath. Her jawline is delicate, however, and
feminine. Her mouth is almost the color of
cherry
juice and is a stark contrast to the pale
blue of her fiery eyes. Her blue bandana is askew on her head. Her
bright red hair is splayed out on a bed of green ferns and
forestry. She looks like something from a medieval painting. Except
for the fact that she could be
a
murderous,
thieving bitch with a group of
like-minded
men who have taken over the
farm.

She’s still rambling and threatening him with
her men.

Sleeping Tigers by Holly Robinson
William Wyler by Gabriel Miller
The Kingdom Land by Bart Tuma
Lowcountry Boneyard by Susan M. Boyer
The Honeytrap: Part 4 by Roberta Kray
The Ecliptic by Benjamin Wood
The Poisoned Island by Lloyd Shepherd
Iris by Nancy Springer
The Body in the Library by Agatha Christie
Highland Fires by Donna Grant