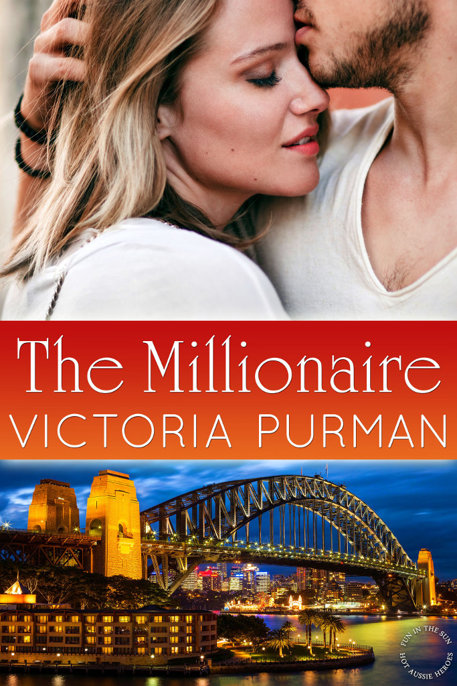 To all my fabulous readers.

This one’s for you!

“I
t can’t be
him.” Ellie Flannery stopped in her tracks and squinted into the brilliant Australian summer sunshine.

It bounced off the perfect, white sand all around her and beamed right up into her face like a flash light, half blinding her. It was only ten in the morning, but already, the blazing, January sun warmed her bare legs and the warm tickle of the Pacific Ocean waves lapped her toes as she sank a little into the sand and stared at the distant figure in the water.

The bay of One Mile Beach was surrounded by sand dunes and natural scrub, and the beach curved between two jutting headlands that marked the coast like bookends. Ellie’s best friend Bron had recently moved there, and Ellie had scored an extra day off work to visit the small coastal town. She’d thought she was the only one on the beach that quiet Monday.

She shook her head. Maybe the sea air and the glare had fired up her imagination. She shielded her eyes with a flat hand and tried to focus on the person in the distance to make sure she wasn’t going mad.

It wasn’t the shoulders she recognised – lots of surfers were built like Olympic swimmers. And it wasn’t the height. Or the tanned. Or the abs or the flat stomach. Or the black board shorts which looked vacuum-sealed against his hips and his muscular thighs. Everywhere she turned in Australia she copped an eyeful of guys like that.

It was the hair. The shoulder length cascade of blond that the man pushed off his forehead with a wave of his hand as he emerged from the surf. Wet and slick and his trademark.

It was him. One hundred per cent.

It was Chris Malone.

He was just as famous for his photographs of war-torn and disaster-ravaged parts of the world as he was for his locks. He’d been shot at by the Taliban, almost swept away by hurricanes, been thrown in jail, and come perilously close to causing diplomatic incidents a number of times. All because he used a camera like a weapon to reveal horror, show compassion, and expose the truth.

Ellie was a reporter on a small Sydney suburban paper and knew him by reputation. One of his stills from the 2004 Indonesian earthquake and tsunami was her computer’s screen saver. She looked it every day, and every day it inspired her to try and capture with her words what he’d managed to capture with none.

“It’s Chris Malone,” she whispered in to the salty breeze. “I knew it.”

He was striding towards her, a surfboard under his right arm, half-walking, half-jogging out of the water. And Ellie tingled. It had nothing to do with the body heading in her direction and everything to do with the realisation that she had a scoop on her hands. And the chance to ask him a favour she knew he wouldn’t be able to refuse. She glanced up and down the beach. No one else was around.

There was just her and Chris Malone. She’d caught the world-famous photojournalist, surfing on an isolated beach, two and a half hours north of Sydney. She was already writing the headline in her head.

Ellie reached into her loose shirt and pulled her iPhone from her swimsuit. It was the only place she could tuck the thing and she never went anywhere without it. She could use it to record an interview, since she didn’t have a pen and notepad with her, and then snap a few pictures.

He was twenty feet away and she was staring. She couldn’t help it. It was Chris Malone. With the hair. And the reputation.

Then he was ten feet from her.

She noticed a heavy, black watch on his left wrist and followed a vein all the way up to the crook of his elbow. If he had a tan line on his hips she couldn’t see it, and there wasn’t a mark on his chest to ruin the sheer perfection of his muscles and corrugations and his perfectly rounded pecs.

And then there were only a few strides between them.

He was so close she could see the droplets of water drizzling down his stunning chest.

Her heart began to thump wildly and her pulse set off on a jog. The words came out before she could stop them, tumbling from her parched lips like the waves on the sand behind them.

“Good surfing out there today?” She wanted to kick herself. Her voice made her sound like a groupie and not like the professional colleague she was. Not that she thought she was in his league by any stretch, but still. She had skills, although they’d apparently deserted her at that very moment.

He stopped. “Excuse me?” Malone raised his eyebrows in a question. The grains of sand that were caught in his neatly trimmed beard were shimmering in the sunlight. When Ellie looked into his eyes they were curious rather than annoyed.

They were the bluest eyes she’d ever seen. Pale and translucent. Like light blue sapphires.

He was looking at her. In a friendly way, actually. And when his gaze dropped from her face to her breasts, that pulse exploded from a jog into a sprint. His gaze settled on her mouth for a moment before meeting her eyes. She realised he was waiting for her to speak.

Something clenched in her chest. All she could think was, don’t blow this. Don’t be an idiot.

“Any good waves?” she managed.

“Yeah, not bad out there today.” And then Malone half-smiled at her and she forgot her own name. He was so much more beautiful in person than in any of the photos of him she’d ever seen. He was always portrayed with his camera, with a flak jacket on, a grim expression and serious eyes, with toppled buildings and rubble behind him in a dusty haze.

But now, here, on the beach, he seemed the opposite of all those things.

“Do you surf yourself?”

His reaction was sudden and jarring. His piercing, friendly eyes became steely and his shoulders stiffened. He took a step back on the sand.

“Shit,” he grunted and shook his head.

Malone raised a hand as if to dismiss her and didn’t say another word. He took off up the beach, his long, strong legs not bothered at all by stomping through the soft sand as he walked to a path in between the coastal shrubs. The sand flicked angrily behind him as he strode away.

Ellie couldn’t move. Her feet were still planted in the sand and when she looked down, she realised she was still clutching her phone. She hadn’t even taken a damn photo.

“I really like your work,” she called half-heartedly into the wind and to the empty beach.

If he’d heard her, he didn’t turn around.

So much for
the middle of freaking nowhere, Chris thought ruefully as he stashed his board into the back of his four-wheel drive. After stripping off in the car park, and changing into dry clothes, he’d driven away with the distinct feeling his day was ruined. His plan had been to get as far away from anyone he knew and just have a quiet surf. Him and the clean, clear waters of Australia’s east coast and the sound of nothing but the roar of the ocean in his ears, the taste of salt in his mouth, and a board under his feet.

Was that really too much to ask?

He’d learnt a long time ago that he couldn’t escape being Chris Malone, no matter where he went. Australia was a huge country, with twenty-two thousand miles of coastline, but of all the damn beaches in all the damn country, he managed to find one where the only other person on the damn beach knew who he was.

And when that only other person was a gorgeous woman with long legs, shoulder-length hair the colour of caramel, and big brown eyes – which he wouldn’t have minded looking into for a little while longer – it was even more disappointing.

Chris had taken the road out of Sydney earlier that day to hit the waves in a place he figured he could be anonymous. It was impossible these days to surf on any of the city’s best beaches without running into someone he knew. He’d been around a long time and he had fingers in a lot of pies. He had connections in the media, in surfing, across a whole range of sports clubs from his youth and, despite his best attempts to stay as far away from it as humanly possible, the business world his father and one of his younger twin brothers, Callum, inhabited.

He’d flown back to Australia four weeks before from Moscow via London, determined to escape the bitter winter and the dark days, with a plan to stay away from everybody. He hadn’t let his father or Callum know where he was. And as for his other brother? Cooper was always chasing a wave somewhere in the world. The rest of the family kept up with his life by checking his surfing competition victories in the sports news.