Read The Mindmage's Wrath: A Book of Underrealm (The Academy Journals 2) Online

The Mindmage's Wrath: A Book of Underrealm (The Academy Journals 2) 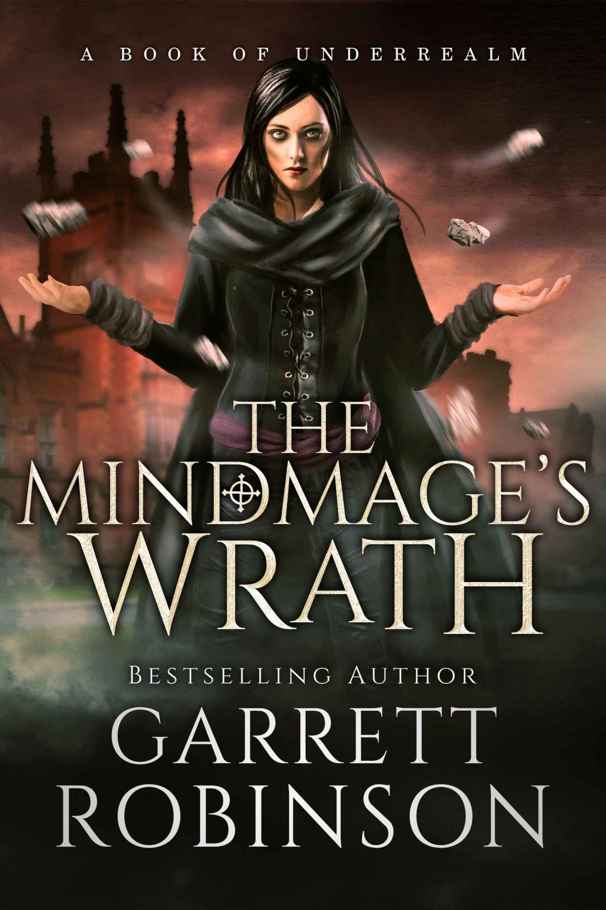 The Books of Underrealm

Copyright © 2016 by Legendary Books. All rights reserved. This is a work of fiction. Any resemblance to actual persons living or dead, businesses, events or locales is purely coincidental. Reproduction in whole or part of this publication without express written consent is strictly prohibited.

THE BOOKS OF UNDERREALM

To see all novels in the world of Underrealm, visit:

Who make everything I do better

To Johnny, Sean and Dave

Who told me to write

Who is endlessly patient (though I don't deserve it)

You have made my life epic.

I hope I can enrich yours.

Legendary Books is home to the very best that fantasy has to offer.

Join our email alerts list, and we’ll send word whenever we release a new book. You’ll receive exclusive updates and see behind the scenes as we create them.

And you’ll get a FREE book, just for signing up.

ONCE, A NEW INSTRUCTOR AT the Academy would have been the talk of the school for days, but now the count of corpses made her unremarkable.

Indeed, Ebon only knew the name Perrin, of the family Arkus, because he was to be her pupil. A woman named Lupa had once taught second-year alchemists, but she had perished in the attack upon the High King’s Seat, falling beneath the blades of the grey-and-blue-clad warriors who had struck from the west, who some said were called Shades.

In the weeks since that battle, Ebon was surprised to see how quickly the Academy had resumed its routine. But repetition could not entirely wipe away the memories. Meals were now muted affairs, and students whispered to each other beneath nervous eyes. Too often, instructors mistakenly called upon students whose seats were empty, and classrooms fell to mournful silence. Too often Ebon passed other students in the common room, tucked into a corner chair, weeping beyond comfort at the loss of a friend.

Too often, Ebon’s thoughts drifted back to the day of the attack, and showed him flesh turning to stone beneath his fingers.

The High King had tripled the guard upon the Seat, and watchfires never ceased their burning in the towers that looked west and east across the Great Bay. The greater part of the Selvan army was now stationed upon the island. Once that would have filled it to bursting, but now there were many empty buildings to house them. Droves of students had been called home despite the increased guard, their parents no longer confident in the strength of the Academy’s granite walls. This despite the fact that the Academy had largely been untouched in the fighting. Only one other structure had stood so firm: the High King’s palace, bloodstained but unbroken.

“I heard that the High King slipped through the Shades like a thief in the night, and led the escape to Selvan’s shores,” Kalem murmured. He, Ebon, and Theren sat in the nearly-silent dining hall, eyeing their food without eating it. The boy’s copper hair stuck out in all directions, for he had roused late that morning.

“And the Lord Prince with her, thank the sky,” said Ebon. He had heard the same tale. These days, rumors flew like wind through the Academy halls. It had begun to weary him. He picked at a stain on the table, causing grime to collect beneath his fingernail.

“Thank the sky,” echoed Kalem, who seemed not to notice Ebon’s mood.

“If you say so,” said Theren. She rolled her shoulder and slowly moved her arm in a wide circle. It had been injured in the attack, and was only recently free from its sling. Sometimes it still pained her. “Yet she could not stop the sacking of the island, and still she has not struck back against Dulmun. Her flight could be taken for cowardice.”

Kalem’s hand tightened to a fist, and he glared at her. “You would rather she had fallen in the palace? Then Dulmun would have won, and there would be no rebuilding now. The nine kingdoms would be in chaos.”

Theren tossed her short bob of hair. She had not renewed its dye in some time, and her dark roots were beginning to show. “Dulmun
did
win. And do you mean to say that the kingdoms are not already in chaos? Half seem to waver on the brink of joining the rebellion.”

“If the other kings have no wish for war, that does not make them cowards, nor traitors.” Kalem lifted his chin, freckled nose twitching. “And besides, we from Hedgemond have pledged our strength to the High King.”

“Your kingdom sits a half-world away. It could not be farther from the war,” said Theren. “Not for nothing is Dulmun’s army so feared. If your king shared a border with them, he might not be so eager. I fear the others will join Dulmun before taking up arms against them.”

“Hist now,” said Ebon, stabbing a spoon into his porridge. “I grow weary of war talk.”

But that was not the truth. Ebon hated any reminder of the Shades’ attack. Not because of the carnage they had wrought, but because of his own battle, alone save for Adara, on a cliff at the Seat’s southern shore. Again his mind showed him flesh turning to stone. The porridge soured in his mouth.

He had not told his friends the truth of that day. Instead, with Adara’s help, he had concocted a well-crafted lie. For how could he tell them that the day the Shades attacked the Seat, he had killed the Dean—
former
Dean, he reminded himself—and his own kin besides.

That truth would not go over well with the King’s law or the Academy’s faculty. Neither, Ebon suspected, would his friends find it easy to forgive.

“What else would you discuss?” said Theren. “War is all about us.”

“Yet it need not consume our lives,” Ebon said. “We still have our studies. Today I shall finally leave Credell’s class behind.”

“And you have my congratulations,” said Kalem. “Almost any instructor would be better than he has been to you. If Lupa were still alive, I should say you would be lucky to fall under her tutelage.”

Ebon fell silent at the mention of Lupa, his eyes cast down. Theren put a hand on his shoulder, but furtively, as though it were an inconvenience. “Try not to dwell on such thoughts. Let us be grateful for those of us still here.”

“As long as we
are
here,” Kalem muttered. He looked at them nervously, as though the words had been an accident.

“What do you mean?” said Ebon, frowning.

“Nothing,” said Kalem, staring very hard at his breakfast.

Theren narrowed her eyes, and then reached over to pinch the back of Kalem’s neck, as though she were a mother cat and he her kitten. “Kalem. What troubles you? Tell me now.”

Kalem sighed and looked at them uneasily. “It is nothing. I will make sure it is nothing. It is only ... my parents wish to bring me home. Back to Hedgemond.”

“That is what I have told them,” said Kalem. “And so far, they have listened. It is only that...well, after the attack on the Seat...they no longer consider it safe.”

“But only the parents of the smallest children are withdrawing them,” said Theren scornfully. Then she gave Kalem a sidelong glance. “Although, now that I think of it, your size—”

Kalem swung a fist, which she easily blocked. Ebon gave her a dirty look. “Stop it.”

She grinned. “I am sorry. The temptation was too great.”

“In any case,” Kalem continued, still glaring at her, “thus far I have managed to convince them I am safe here. Indeed, I feel safer at the Academy than I would in my family’s own home, what with the war brewing.”

“And does your family agree?”

“For now, at least,” said Kalem softly. “I am not leaving just yet.”

“I wish others’ parents would pull them from the school,” muttered Ebon. Across the dining hall, Lilith’s malicious gaze had caught his eye.

Something had changed in Lilith since the attack on the Seat. Before she had seemed to take Ebon for a joke, and had mocked him with open scorn. But now she seemed truly hateful. He knew not why she despised him so, nor what he could do to mitigate it—and he feared what might come of it if he did nothing.

Theren followed his gaze to Lilith, and her countenance grew hard. Turning back, she leaned in close to speak in a low voice. “That reminds me. Have you heard about the vaults?”

Ebon frowned, but Kalem leaned in closer. “I have heard only a rumor.”

“It seems something was stolen from them,” said Theren. “Though we are not yet certain if it was taken during the attack, or some time after the students returned to the citadel.”

“Did you not know? I conduct my servitude in the vaults.”

Kalem’s eyes widened. But Ebon raised a hand to stay them both. “A moment. As far as I am concerned, you are both speaking in tongues. What servitude? And what are these vaults you speak of?”

“Every student in their sixth year embarks upon servitude in the Academy,” said Kalem. “It is meant to teach us the value of simple work in the service of others. Also, we are paired with advanced wizards with many years of experience, so that we may learn from them.”

“And what are the vaults?”

“They are rooms, buried deep within the Academy’s bowels,” said Theren. “Within them are contained magical artifacts of thousands of years of history. Some predate the Academy itself.”

Ebon opened his mouth to ask another question, but Kalem spoke first, and eagerly. “What was it that the thief stole?”

“An artifact, but which one, we do not know,” said Theren. “I have spent the last several days trying to find out. But I cannot find the records for the room where the theft occurred.”

“What are these artifacts?” said Ebon. “What do they do?”

“Wizards of great power can imbue objects with magical qualities,” said Kalem. “These can perform some small bits of magic even without a wizard’s power. Some are little more than baubles. But others, especially older ones, often carry the power of the Wizard Kings.”