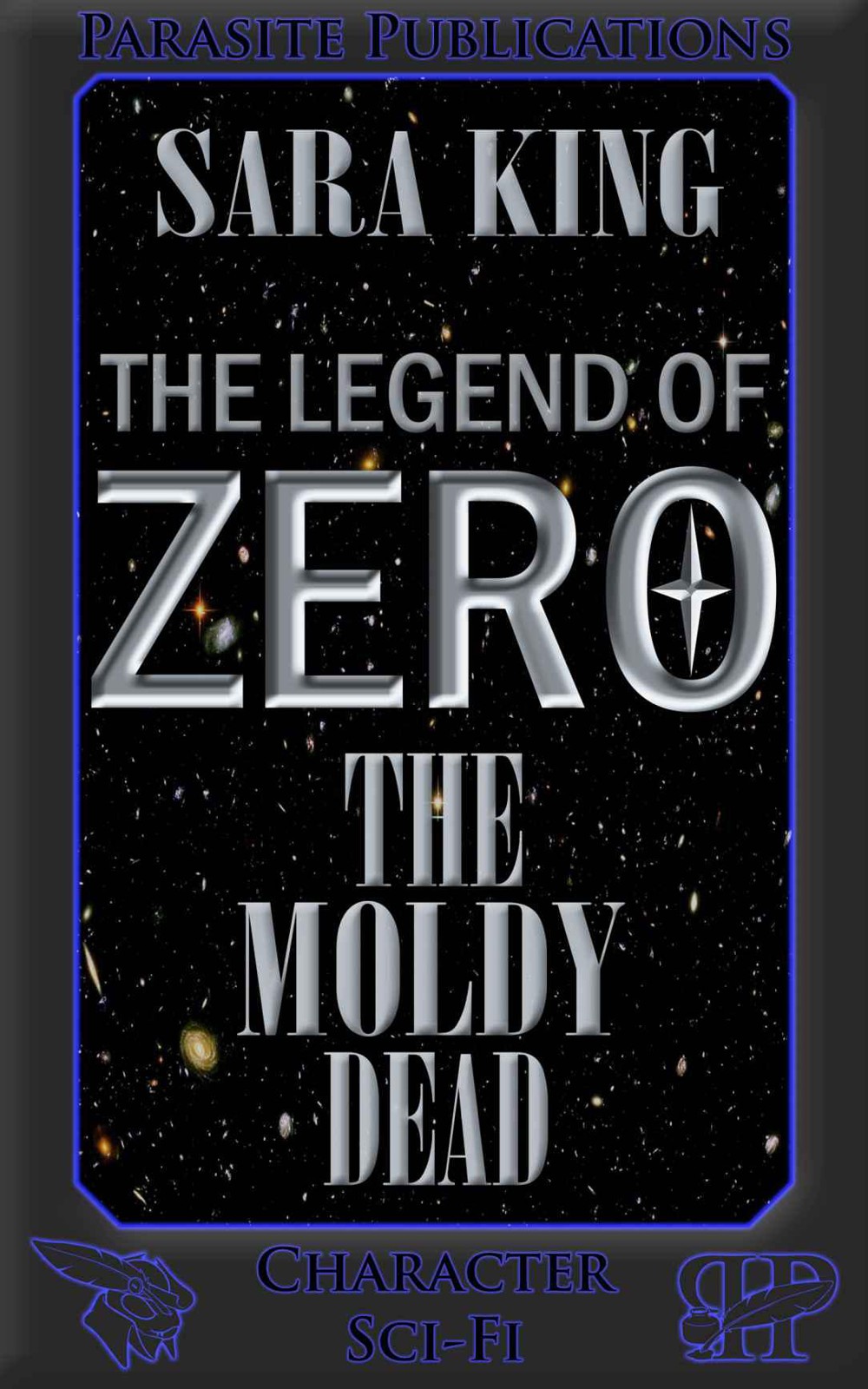 The Legend of ZERO
and The Moldy Dead are copyright © 2013 by Sara King.  No part of this work may
be copied or reproduced without the express written consent of the author.  For
inquiries (begging?), please write Sara King at [email protected]

But!  If you’re still
unsure, let’s compare the facts.  Fact:  This story involves sentient creatures
with three legs, sentient creatures with six legs, and sentient creatures with
no legs.  While I suppose you could MAKE a sentient creature with no legs, it’d
be awfully difficult to make, say, one with six.  Fact:  This story involves
interstellar spaceships.  Humanity gets really super excited if it gets to the
Moon.  The thought of going to Mars is like, whoa.  The thought of leaving our tiny
solar system, which is only one tiny star in a single galaxy made up of at
least 200,000,000,000, with billions of other galaxies out there just like it,
makes most people laugh or roll their eyes.  Unless something drastic happens,
we won’t be colonizing other planets for, gee, centuries.  That obviously rules
out your grandmother being on the spaceship in this story and my devious intent
to expose her secret collection of decorative elephants.  Fact:  In this story,
there is no mention of Earth, Humans, McDonalds, or even Wal-Mart.

This story features
Congress’ discovery of the Geuji, one of the main antagonist/protagonist
species in The Legend of ZERO series.  It was written to explain why the
Geuji’s history has been so heart-wrenchingly tragic from very First Contact.
Though it’s a stand-alone 8,000-word story,
The Moldy Dead
is best read
before Zero Recall to get the full scope of what has happened to the Geuji as a
species, and to understand Forgotten’s frame of mind in the Legend of ZERO
books.

It took eight and a half turns to reach the mold
planet.  During the envoy’s journey to the Outer Line, seven members of their
crew died; three to suicide, two to old age, and two more simply didn’t wake
up, their bodies rotting inside substandard Congressional casks.

Esteei had risen that morning to find that only
eight of their original fifteen were left.  The Ooreiki were whispering foul
play, giving the Huouyt suspicious glances, but Esteei was accustomed to the
inter-species angst.  He was more worried about the other Jahul, whose frozen
corpse now drifted somewhere in their wake.

The senior Jahul Emissary was one of the three who
had simply put on their spacesuits and thrown themselves into the ship’s
backwash while everyone else slept.  It left Esteei, the only remaining Jahul
on the ship, in charge of an ill-fated mission nobody wanted anyway.

Now, staring out at the clammy,
glistening black landscape spread out before him, Esteei wondered if he should
have done the same.

The entire planet was covered with
mold.

The only areas clear of the
glistening ebony organism were along the beaches, where their ship now rested.
The rolling black waves halted at the highest flood line, leaving about five
rods of shoreline where Esteei and his envoy could set up for their turn-long
stay.

It was a pointless gesture.  There
were no beings here for Esteei to make contact with.  Anyone could see the only
thing that lived here was mold.

Grimacing, Esteei stepped back onto
the ship to fill out the death reports.

Crown’s peers buzzed with
conversation.  The ship had descended at an angle perpendicular to the ground,
as the Philosophers had thought it might.  It meant their visitors were well
beyond the aero-based technologies, as they predicted.  In fact, everything
about their visitors had been theorized long in advance…except for the way they
looked.

Not even the Philosophers could
out-guess Nature.

Nature, it seemed, had produced at
least three other sentient species, each vastly different from the next.  Most
of them were short, squat, brown things with tentacles bearing long metal
instruments, probably some form of energy weapons.  They had large brown eyes
with slit pupils, the surfaces sticky with clear mucous, their simple intentions
clearly written in their expressive faces.

They were the guardians.  The brown
bipeds spread out in a fan, testing the area, ready to draw enemy fire from
their wards, should they encounter hostility.

Of course, they encountered none.

The Philosophers had been waiting
for this a very long time.

Soon, they would be free.

The other two aliens were
different.  The first was tall, with white cilia coursing over its skin, giving
it a downy appearance.  It alone had the biological compatibility to leave the ship
without wearing a protective suit.  It walked on three muscular legs and
appeared to have some aquatic ancestry, since it had trouble keeping itself
upright in the sand.

It was the eyes of this one that
bothered Crown’s peers.  Those who could see them said the tripod’s eyes were
unnatural, blue-white and difficult to read.  They determined that he was a
leader of sorts, as it was he who struck out along the shore, following the
waterline.

The third alien was the one that
intrigued them, though.  The guardians ringed him, their sticky brown eyes
alert and watchful.  If he was not the leader, he was very important to their
group.

He walked naturally on six legs,
though from the way his splotchy green skin folded in the center of its back,
it appeared as if he could shift its weight onto the back four legs and
manipulate objects with its two front, three-fingered hands.

The hexapod was not physically
strong.  Like the aquatic alien, it appeared to be struggling under the gravity
of the Philosopher planet.  Its six legs were spindly, almost out of proportion
with its long, dome-shaped body.  Its eyes were even more of a mystery.
Completely black, yet they somehow conveyed more emotion than the other seven
combined.

When Crown learned they were
heading in his direction, he grew excited.  He knew it was embarrassing for a
Philosopher to lack that kind of discipline, but he couldn’t control his
curiosity.  He was tired of subsisting on thoughts passed through a million
others before it reached him.  He was tired of listening to second-hand
accounts, tired of theorizing, tired of hypothesizing, tired of imagining.

Crown wanted to see them.

They began to explore the shoreline first, putting
off wading through the endless acres of black mold as long as possible.

The Ooreiki youngsters, desperate to find some form
of life on the planet other than the omnipresent black mold, picked up several
odd-shaped stones and suggested they were broken carapaces of aquatic critters,
that possibly the dominant species of the planet lived in the oceans and not
the land.

Esteei and Nirle, the only two
survivors who had been on a Congressional envoy before, gave them the benefit
of the doubt, though it was painfully obvious to both of them that the stones
were just that.

Bha’hoi was not so tactful.

“Those are rocks, you ignorant
Ooreiki furgs.  Jreet hells, I’ve had enough of this.  I’m going back before
their stupidity rubs off.”  Frustration flaring off of him, the Huouyt Overseer
then turned and stormed back to the ship, leaving the seven of them alone on
the beach.

The young Ooreiki dropped their
prizes dejectedly, their expressive faces wrinkled in shame.

Prime Commander Nirle lifted his
rifle and watched Bha’hoi go through the scope, his anger hot against Esteei’s
sivvet
.
Tempers had flared ever since they’d learned their destination, and for a
horrible moment, Esteei thought the Ooreiki was going to fire.

“Two hundred credits says I can
kill him in six shots,” Nirle said, still watching the Huouyt’s narrow back
through his rifle.

Esteei was curious, despite
himself.  “Why six?”  He knew a Huouyt was hard to kill, but Nirle had been
trained in Planetary Ops, of the Ooreiki Ground Force.  They prided themselves
in their weapons mastery.

Still watching the Huouyt with his
weapon, Nirle replied, “I’d have to blow his legs and arms off first.”

Esteei, who had not been trained in
the arts of killing Huouyt, was lost.  “Why?”

“Because it would hurt more,” one
of the battlemasters answered.  “Five for the limbs, then the last one for the
brain.”

They moved on, dutifully scouting
the empty shore for life—an endeavor that was obviously becoming more pointless
with every tic that passed.  Eventually, the younger Ooreiki became more
animated, their shame disappearing with their Prime Commander’s anger.  They
even began picking up odd-shaped stones again.

An hour or two later, a sudden, odd
rush of anxiety slammed into Esteei’s
sivvet
, almost knocking him over.
He frowned, glancing at his companions.  “Is something wrong?”

Nirle grunted.  “Yeah.  I didn’t
pull the trigger.”  The squat brown Ooreiki was looking back towards the ship
wistfully.

Esteei glanced at the younger
Ooreiki, all of whom were watching him with curious, sticky brown eyes.  Which
one of them was anxious?  And why?

His
sivvet
continued to
burn, the acidic-metallic taste right before fear.  None of them, though,
seemed to be worried.  As Esteei scanned the endless expanse of black mold that
seemed to be creeping toward them as they stood there, shock hit his
sivvet
like a cold splash of liquid nitrogen, more powerful than anything he’d ever
felt before.

Nirle noticed his glances and
frowned, his stocky body tightening.  “Boys, let’s get our Emissary back to
base.  If there was something here, he would’ve felt it already.”

“Wait.”  Coldness continued to
pound at him, icing down his
sivvet
, making his whole body tremble.

Nirle paused on the flat,
wind-lapped stones.  “Wanna give it a few more tics?  Don’t blame you.  Truly,
Jahul, I’d shoot myself if I had to have the Huouyt in my head.”

Esteei frowned out over the waves
of mold, feeling the anxiety growing to something bigger.  “There’s something
out there.”

Nirle’s face hardened with
seriousness.  “Where?”

Esteei scanned the glistening mass,
but saw no break in its rolling perfection.  “I don’t know.  Maybe
underground.”

“What’d you feel?” Nirle asked,
coming to stand beside him.

“So we’ve been sighted.”  At his
words, every Ooreiki in the group took a fighting position around Esteei,
protecting him with their bodies.

There was one rock that kept
drawing Esteei’s attention.  It was shaped like an upside-down teardrop,
weather-beaten to near oblivion.  The sticky black mold had crested the top,
gleaming in the sun like a glossy black raindrop.

As Esteei watched, the mold moved.

Like wind over a field of grass, it
rolled.
The rolling spread outward from the inverted tear-shaped rock,
until every glistening black surface was moving.

“You see that?”  Nirle whispered.

Esteei felt sick.  “Take me back to
the ship.”

Never in his life had Crown been so
impatient.  He heard reports that the tripod aquatic alien had turned back,
some sort of dispute, and that one of the guardian aliens had aimed his weapon
at the aquatic one’s back.

As if the universe was answering
his prayer, the seven remaining aliens stopped on the beach in front of him.

When Crown saw the hexapod’s face,
he flinched back in shock.  It was the same face that had haunted his
subconscious for thousands of turns, the face that Crown had always thought to
be a construct of his own boredom.

But here he was, and it boded
poorly for the Philosophers.

The Pirate Ruse by Marcia Lynn McClure
Not Quite Married by Lorhainne Eckhart
Distant Shores by Kristin Hannah
The Knitting Circle by Ann Hood
The Bark Before Christmas by Laurien Berenson
Time Changes Everything by Dozier, Melinda
A Love Like Ours by Becky Wade
Best-Kept Boy in the World by Arthur Vanderbilt
Call Me Princess by Sara Bl&#230;del
Shadow on the Sand by Joe Dever