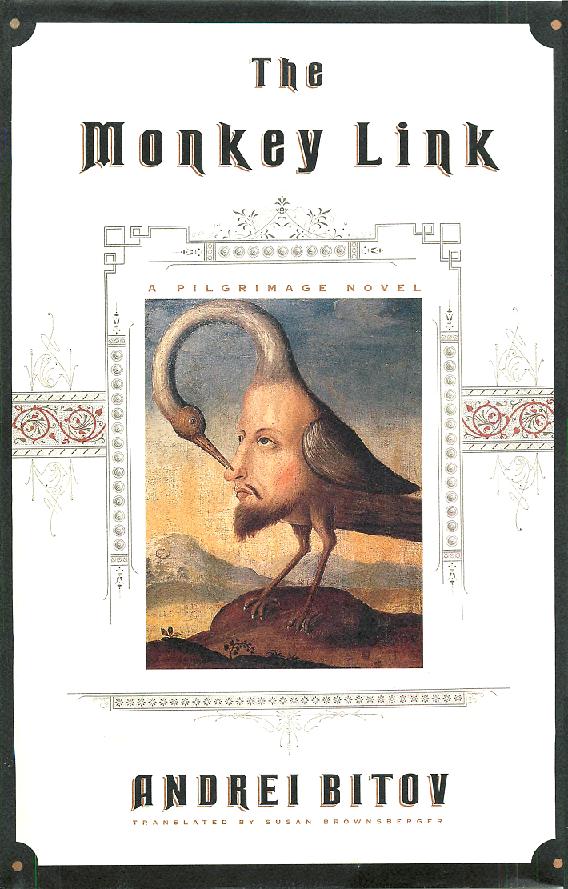 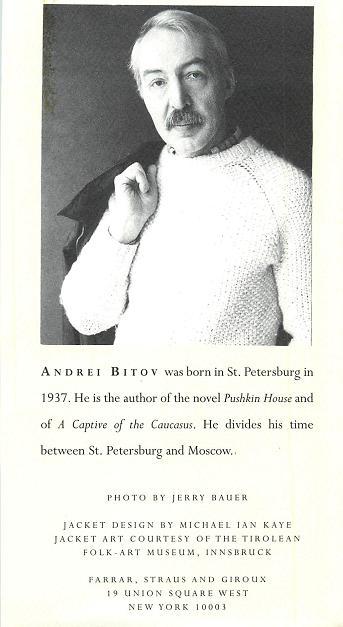 Andrei Bitov’s first novel in almost a decade is a challenge to the form. Full of talk, philosophical speculation, and dark humor,
The Monkey Link
presents a highly original view of the world and of the former Soviet Union.

Andrei Bitov wrote the three tales in the novel between 1971 and 1993, while the Soviet Union moved from peace to war to collapse. The first tale was published in Russia in 1976, but the second did not appear-and the third could never have been written-until after
glasnost.
As time flows through the novel, the changing fortunes of the author, the hero, the censor, and their country generate a very complex set of ironies.

On the simplest level,
The Monkey Link
is a novel in three acts, a comedy of ideas. In the waning years of the Empire, a poet traverses Russia, from the Baltics to the capital, to the shores of the Black Sea. Along the way, he discusses man’s place in the scheme of things with, among others, a very sober scientist and a very drunken landscape painter. He is harassed by the authorities, spends time on a movie set, and is an eyewitness to the August 1991 coup.

Intricate in its structure but sweeping in its concerns, this exciting novel confirms Bitov’s position as one of the most important writers in Russia today.

THE SECOND TALE Man in a Landscape (the Novice)

FROM THE TRANSLATOR The Boundaries Within

Nothing in this book is fictitious except the author.
—The Author

The author asks the blessing of the superior of Motsameta Monastery, Father Tornike, and of Father Zenon, painter of icons.

The author thanks the Biological Station of the Zoology Institute of the U.S.S.R. Academy of Sciences, in what used to be East Prussia; Mr. Badz Zantaria, of Tamysh, Abkhazia; the Kulturreferat of Munich; and the Wissenschaftskolleg, Berlin, for making it possible to write this work.

The author thanks Rosemarie Tietze and Susan Brownsberger for their endless patience and valued suggestions.

The author thanks as well his friends and comrades for the friendship, generosity, and tolerance shown to him in various periods of his life as he and they gained shared experience: poet Gleb Gorbovsky; writer and poet Yuz Aleshkovsky; artist, sculptor, writer, playwright, and director Rezo Gabriadze; architect and artist A. A. Velikanov; artist B. A. Messerer; and especially Bella Akhmadulina and the great singer Victoria Ivanova; as well as Dr. V. R. Dolnik, professor of biological sciences; writer and traveler G. Y. Snegirev; poet and singer S. G. Saltykov; writer Leonid Gabyshev; art critic Andrei Eldarov; artist and restorer Sergei Bogoslovsky; physicist Ruslan Jopua; writer Daur Zantaria; world record holder Marlen Papava; and many, many others. 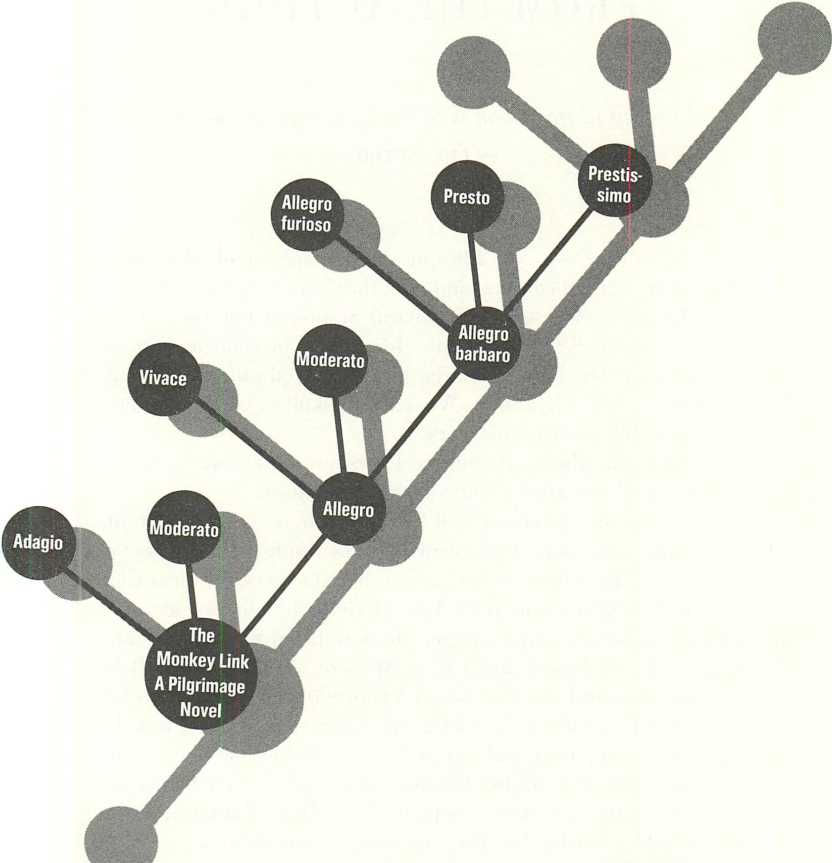 Two men went up into the temple

I wouldn’t want to find that this had style.

in what I plan to say.

We live on the floor of the air-ocean.
{2}
Among houses and trees as if among mussels and seaweed. Here comes the crab, his bottom shell scraping the asphalt, his armor-clad neck immobile; only by accident, as he crawls over circumstances in his way, will he look up—there above is the splashing sky, and suspended in it, barely moving her fins, is a bird. Birds are the fish of our ocean.

We live on the border of two habitats. This is basic. We are neither one thing nor the other. Only birds and fish know what it means to have one habitat. They don’t
know
this, of course. They belong. I doubt that man would meditate, either, if he flew or swam. To meditate, one needs a contradiction that does not exist in a homogeneous habitat—the tension of the border.

There is constant conflict and incident on this border. We are tense. We relax only in our sleep, in a kind of scavenged safety, as if under a stone. Sleep is our way of swimming, our only way of flying. Behold how heavily man treads the earth

As if in pain. Perhaps the asphalt underfoot is too hard, or his shoes are too tight, or his workday is too long, or his shopping bags weigh down his arms. That is how he walks.

“Behold the fowls of the air

they sow not, neither do they reap, nor gather into barns; yet your heavenly Father feedeth them. Are ye not much better than they?”

“Are not two sparrows sold for a farthing? and one of them shall not fall on the ground without your Father.

“But the very hairs of your head are all numbered.

“Fear ye not, therefore, ye are of more value than many sparrows.”

In some sense, I fear, that text states all we know about birds.

Birds are strangely absent in our lives, although unquestionably visible to the naked eye. They seem to fly at the periphery of our consciousness, as if painted on the very inside of the bell jar with which we have capped the inhabited world. Naive as such concepts now seem, the heavenly canopy is in fact the precise inner boundary of our knowledge, although it was once declared the outer. This opaque bell jar, which we carry with us, wobbles faintly at our every step. The birds fly always at the rim of it, and we cannot draw near to them—there is a curvature out there, a bend, a slip

So birds exist and do not exist. After all, by nature we watch our feet. Looking up is a luxury. From Aristophanes to Hitchcock, it’s not birds that exist but the concepts to which they give rise. We can examine a bird only when it’s dead. We can shoot and eat one. But there’s no contact. This is the same as with the heavenly canopy: we know by now that the sky doesn’t end there, but for everyday life the earth remains flat, and visibility is capped by our sphere of experience, as if by a lid.

I will venture to assert that we have less contact (in the physical sense) with birds than with any other living creatures. It’s hard to imagine that you have touched and caressed one, or that one has pecked you. They just fly around. We have much more experience of direct contact with the more remote groups of creatures diminished by the perspective of evolution—with flies, let’s say. The airplane still doesn’t make us think of a bird, but the helicopter looks disgustingly like a dragonfly. Hitchcock spent his childhood in a taxidermist’s shop—birds pecked not in self-defense but on the attack. In art, the bird is a naturally surrealistic creature.

I was here on the Kurish Spit, at the biological research station, for the seventh time. Or maybe it wasn’t the seventh, but seven makes a round number

…
There’s no getting used to it. Each time, I’m surprised by what I see here again. Supposedly, the reason I come here each time is that I’ve forever remembered what a unique place it is on this earth, and how resurrectingly wholesome it is, making no threats and imposing no demands, existing so independently of you that it doesn’t even reject you—that is, the kind of place where, in the marvelous words of Olga S., “soul is miscible with body in all proportions.” That feeling is probably first love, even though expressed in the language of chemistry

…
Supposedly, that’s the reason I come—and each time, I forget the reason. Suddenly I’m here. This place recalls a homeland I have never seen.

To Honor You Call Us by Harvey G. Phillips, H. Paul Honsinger
Chronicles of Logos Quest For the Kingdom Parts IV, V, VI, and VII Revised With Index (Quest For the Kingdom Set) by L. M. Roth
All Other Nights by Dara Horn
The Lost Island by Douglas Preston
Sleeping Alone by Bretton, Barbara
Slave Of Dracula by Barbara Hambly
A Farewell to Arms by Ernest Hemingway
Love Wild and Fair by Bertrice Small
El maleficio by Cliff McNish
Murder Comes by Mail by A. H. Gabhart