Read The Monster of Florence Online

The Monster of Florence 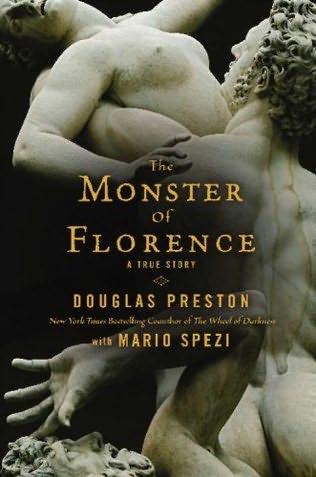 Parts of this book first appeared in
Dolci Colline di Sangue
(Sonzogno, 2006) as well as in the
Atlantic Monthly
and
The New Yorker
.

Cast of Secondary Characters, in Approximate Order of Appearance

PART I: The Story of Mario Spezi

Talking to the Ground

Dinosaurs in the Attic

BY DOUGLAS PRESTON AND LINCOLN CHILD

The Wheel of Darkness
*

The Book of the Dead
*

The Cabinet of Curiosities
*

To my partners in our Italian adventure: my wife, Christine, and my children Aletheia and Isaac. And to my daughter Selene, who wisely kept her feet planted firmly in America.

Cast of Secondary Characters, in Approximate Order of Appearance

Enzo Spalletti
, Peeping Tom arrested as the Monster, released when the Monster struck again while he was in jail.

Fabbri
, another Peeping Tom questioned in the case.

Prof. Garimeta Gentile
, gynecologist rumored to be the Monster.

Brother Galileo Babbini
, Franciscan monk and psychoanalyst who helped Spezi deal with the horror of the case.

Antonella Migliorini
and
Paolo Mainardi
, killed in Montespertoli near Poppiano Castle on June 19, 1982.

Silvia Della Monica
, prosecutor in the case, who received in the mail a piece of the Monster’s last victim.

Stefano Mele
, immigrant from Sardinia, who confessed to murdering his wife and her lover on August 21, 1968, and was sentenced to fourteen years in prison.

Barbara Locci
, wife of Stefano Mele, murdered near Signa with her lover on August 21, 1968.

Natalino Mele
, son of Stefano Mele and Barbara Locci, who was sleeping in the backseat of the car and who witnessed his mother’s murder at age six.

Barbarina Vinci
, wife of Salvatore Vinci back in Sardinia, probably murdered by him on January 14, 1961.

Giovanni Vinci
, one of the Vinci brothers, who raped his sister back in Sardinia, and was a lover of Barbara Locci.

Salvatore Vinci
, the ringleader of the 1968 double homicide, lover of Barbara Locci, who probably owned the Monster’s gun and bullets, which may have been stolen from him in 1974, four months before the Monster’s murders began. Arrested for being the Monster.

Francesco Vinci
, youngest of the Vinci clan, lover of Barbara Locci, uncle of Antonio Vinci. Arrested for being the Monster.

Antonio Vinci
, son of Salvatore Vinci, nephew of Francesco Vinci, arrested for illegal possession of firearms after the Monster’s killings in Giogoli.

Cinzia Torrini
, filmmaker who produced a film on the Monster of Florence case.

Piero Luigi Vigna
, lead prosecutor in the Monster case in the 1980s, responsible for the arrest of Pacciani. Vigna went on to head Italy’s powerful antimafia unit.

Mario Rotella
, examining magistrate in the Monster case in the 1980s, who was convinced the Monster was a member of a clan of Sardinians—the so-called “Sardinian Trail” leg of the investigation.

Giovanni Mele
and
Piero Mucciarini
, the brother and brother-in-law of Stefano Mele, arrested for being the two Monsters of Florence.

Paolo Canessa
, prosecutor in the Monster case in the 1980s, who is today the public minister (equivalent to a U.S. attorney) of Florence.

Prince Roberto Corsini
, murdered on his estate by a poacher, August 19, 1984, the subject of rumors that he was the Monster.

Sabrina Carmignani
, who came across the Scopeti clearing on Sunday, September 8, 1985, the day of her nineteenth birthday, and encountered the aftermath of the murder of the French tourists.

Ruggero Perugini
, the chief inspector who took over the Squadra Anti-Mostro and prosecuted Pietro Pacciani. He was the model for
Rinaldo Pazzi
, the fictional chief inspector in Thomas Harris’s book (and movie)
Hannibal
.

Pietro Pacciani
, Tuscan farmer who was convicted of being the Monster, acquitted on appeal, and then ordered to restand trial. He was the alleged leader of the so-called
compagni di merende
, the “picnicking friends.”

Aldo Fezzi
, the last
cantastorie
, or story singer, in Tuscany, who composed a song about Pietro Pacciani.

Arturo Minoliti
, carabinieri marshal, who believed that the bullet found in Pacciani’s garden, used to convict Pacciani as the Monster, might have been planted by investigators.

Mario Vanni
, nicknamed il Torsolo (Apple Core), the former postman of San Casciano, convicted of being Pacciani’s accomplice in the Monster killings. During Pacciani’s trial, Vanni uttered the phrase that became immortalized in Italian, “We were picnicking friends.”

Michele Giuttari
, who took over the Monster investigation after Chief Inspector Perugini was promoted to Washington. He formed the Gruppo Investigativo Delitti Seriali, the Serial Killings Investigative Group, also known as GIDES. He engineered Spezi’s arrest and Preston’s interrogation.

Alpha
, the first “secret witness,” whose name was actually
Pucci
, a mentally retarded man who falsely confessed to having witnessed Pacciani commit one of the Monster’s killings.

Gamma
, the third secret witness, named
Ghiribelli
, an aging prostitute and alcoholic who allegedly would turn a trick for a twenty-five-cent glass of wine.

Lorenzo Nesi
, the “serial witness” who suddenly and repeatedly remembered events going back decades, the star witness in the first trial against Pacciani.

Francesco Ferri
, president of the Court of Appeals, who presided over Pacciani’s appeals trial and declared him innocent. He later wrote a book about the case.

Prof. Francesco Introna
, the forensic entomologist who examined photographs of the French tourists and stated that it was scientifically impossible for them to have been murdered Sunday night, as investigators insist.

Gabriella Carlizzi
, who ran a conspiracy website that identified the Order of the Red Rose as the satanic sect behind the Monster killings (as well as the entity responsible for 9/11) and who accused Mario Spezi of being the Monster of Florence.

Francesco Narducci
, the Perugian doctor whose body was found floating in Lake Trasimeno in October 1985, subject to rumors he had been the Monster of Florence. His apparent suicide was later ruled a murder and Spezi was accused of having participated in it.

Ugo Narducci
, Francesco’s father, a wealthy Perugian and an important member of the Freemasons—cause for official suspicion.

Francesco Calamandrei
, ex-pharmacist of San Casciano, accused of being the mastermind behind five of the Monster’s double homicides. His trial began on September 27, 2007.

Fernando Zaccaria
, ex–police detective who introduced Spezi to Luigi Ruocco and who accompanied Spezi and Preston to the Villa Bibbiani.

Luigi Ruocco
, small-time crook and ex-con who told Spezi he knew Antonio Vinci and who gave Spezi directions to Vinci’s alleged safe house on the grounds of the Villa Bibbiani.

Ignazio
, alleged friend of Ruocco who had supposedly been to Antonio’s safe house and seen six iron boxes and possibly a .22 Beretta.

Inspector Castelli
, detective with GIDES who served Preston with papers and was present at his interrogation.

Captain Mora
, police captain present at the interrogation of Preston.

Giuliano Mignini
, the public minister of Perugia, a public prosecutor in Italy analogous to a U.S attorney or a district attorney.

Marina De Robertis
, the examining magistrate in the Spezi case, who invoked the antiterrorist law against Spezi, preventing him from meeting with his lawyers following his arrest.

Winnie Rontini
, mother of Pia Rontini, one of the Monster’s victims.