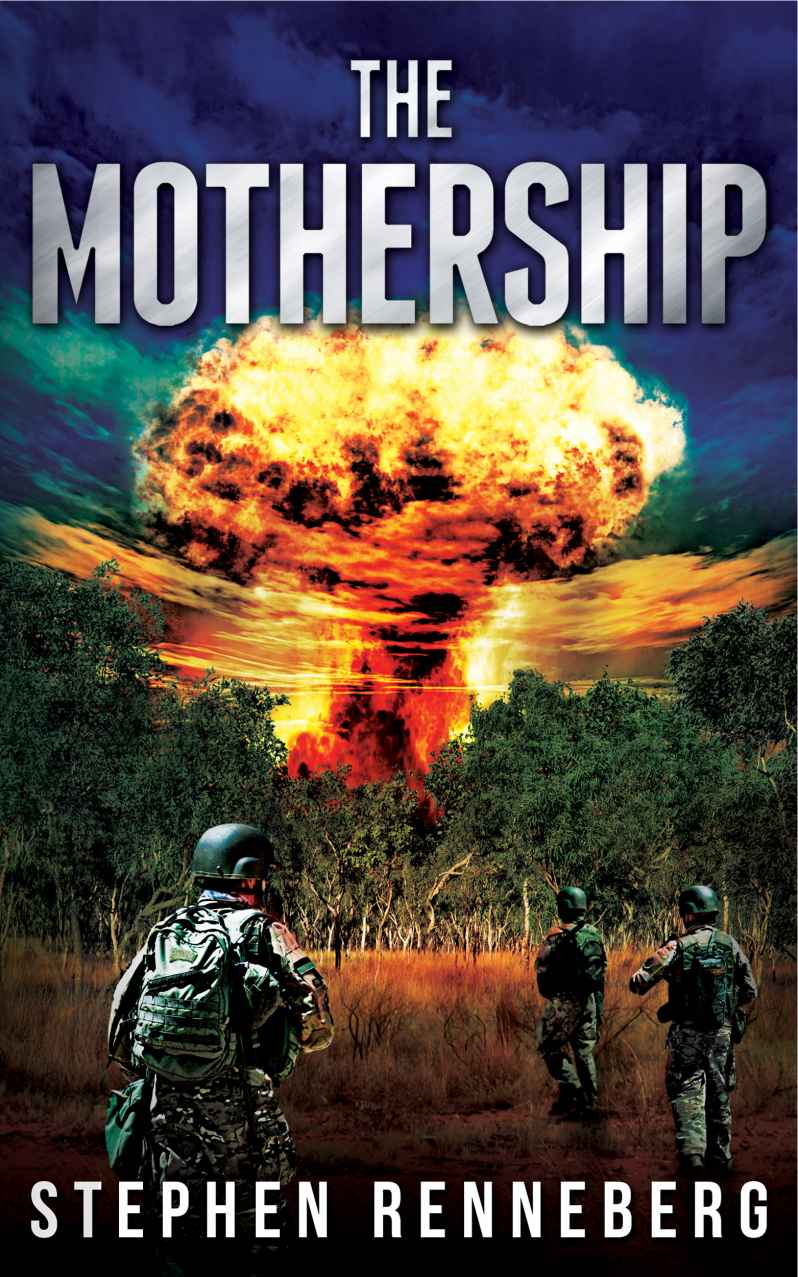 All rights reserved. No part of this publication may be reproduced,
stored in a retrieval system, or transmitted, in any form, or by any means,
electronic, mechanical, photocopying, recording, or otherwise, without the
prior written permission of the copyright owner.

This eBook is licensed for your personal use only. This eBook may
not be re-sold or given away to other people. If you would like to share this
book with another person, please purchase an additional copy for each person
you share it with. If you are reading this book and did not purchase it, or it
was not purchased for your use only, then you should purchase your own copy
from a licensed eBook distributor. Thank you for respecting the author’s work.

This novel is a work of fiction. Names and characters are the
product of the author's imagination, and any resemblance to actual persons,
living or dead, is coincidental.

in appreciation of her

She didn’t remember her transport
cell’s rise in temperature, or the tingling sensation accompanying the fading
of the stasis field. All she felt was an irrational fear of confined spaces,
and an instinctive need to thrash wildly about inside her tiny space, to break
free and escape into a tranquil blue sea. Fortunately, her muscles wouldn’t
respond, giving her time to remember where she was and to relax with the
knowledge that she would soon be released. It was always that way after
revival; confusion, followed by fear and panic, then calm.

A tiny
needle pricked the base of her skull, injecting nano machines into her neck.
The microscopic machines surged through her circulatory system, dispersing an
antidote to the cellular suppressant she’d taken before the flight. A moment
later, the outer aquatic membrane covering her bulbous amphibian eyes slid back
as she regained control of her vision.

Nemza’ri
saw fully three quarters of the cell at a glance. She focused on its dull metal
sides and the transparent surface above her face as she oriented herself. Her
field of vision was wide for a predator, due to her eyes being set to the side
of a streamlined, elongated head. Her extraordinary sight was an evolutionary
signpost to eons past, before technology, when her species had been both hunter
and hunted in a dangerous environment.

She
tried to move, but acceleration fields still held her firmly in place. Movement
was always restricted inside the transport cells to protect the occupants from
harm. Knowing she didn’t have long to prepare, she concentrated on breathing,
and practicing the muscle tensing routines that helped return dormant tissue to
life. The window above her face revealed her cell was already gliding through
narrow metal canyons honeycombed with millions of octagonal sleep cells, each one
capable of supporting its sleeping occupant for years, even if the ship lost
all power. The cells were a safety precaution for mass transit, not a means of
enduring long journeys, as travel times were relatively short irrespective of
distance. Scattered through the vast network of symmetrical chasms were rows of
tiny lights, their feeble illumination barely piercing the darkness.
Occasionally, she saw the blue glow of a maintenance drone floating above, but
no sign of any other cells being activated. She realized this was a midflight
technical call, not their final destination. It meant she’d have very little
time to recover before going back under, and would be aching for days after her
next revival.

When her transport cell floated into a
docking port, the transparent surface overhead dilated, then acceleration
fields lifted her up onto the platform above. A one-piece green jumpsuit
floated in front of her, marked with her clan status and technical rating. While
under way, because she was crew, she outranked even the Beldams, the female
ruling elite, although in terms of the ship’s hierarchy she was just a low
grade technician, qualified only to maintain the inertial accelerators used for
in-flight attitude control. She’d long ago given up all hope of ever working on
the superluminal drive. A brief stint in the knowledge tanks had proven to her,
and to her superiors, that the required math for more advanced work was beyond
her understanding. In human terms, her intellect towered above the most
brilliant scientists ever born on Earth, yet compared to her own kind, she was
of only meager ability.

While she pulled on her jumpsuit, her
cerebral implants relayed instructions informing her that a power fluctuation
had developed in one of the hull’s maneuvering thrusters. It was a simple fault
requiring a component swap, but as it was related to the ship’s safety, it had
to be supervised by a qualified technician. Midflight revivals for mundane
maintenance tasks always went to the most junior engineers which, in this case,
was her.

Nemza’ri stepped onto the gravity lift,
pinging it with her biological sonar. Her sonic lobe was located beneath a
smooth bulge protruding from her forehead, enabling her to sense objects many
kilometers away underwater. It also served as an efficient means of
communicating with the ship’s sonic receptors, negating the need for cumbersome
control panels.

The grav lift swept her towards the outer
hull, where a maintenance drone waited with the replacement component. She
pinged the far wall, sensing the subtle variation in metal density that marked
the access port’s location. A narrow tunnel appeared in the wall, just wide
enough for her and the maintenance drone to use in single file. She followed it
in and began crawling towards the emitter housing lying just beneath the ship’s
outer skin. Thousands of such emitters were placed around the ship’s hull,
giving the enormous vessel astonishing acceleration at low velocity and precise
positioning at the center of the spatial bubble during superluminal flight.

When Nemza’ri was halfway through the outer
hull, a warning siren sounded throughout the ship. She stopped surprised,
knowing the Command Nexus, the ship’s guiding intelligence, would never have
allowed her into the hull if there was any possibility of danger. The siren
could only mean that the Command Nexus itself had been surprised, which should
have been impossible.

She hesitated, wondering if she should
retreat back into the interior. Before she could move, the tiny crawlway closed
around her as the ship’s
armor expanded, sealing off every weak
point in the massive hull. The maintenance drone was crushed to the thickness
of an atom a meter from her face, while behind her, the way back into the
ship’s interior vanished. The sides of the tunnel shrank in around her until
they were just centimeters from her body. Hull sensors, detecting Nemza’ri’s
presence, ensured a protective bubble formed around her while the Command Nexus
prepared to deal with the unexpected emergency. If she’d been a senior officer,
she might have ordered the ship to open the access tunnel, but at her lowly
rank there was no possibility of overriding command protocols.

Trapped in the dark, she fought her dislike
of confined spaces by resuming her muscle tensing exercises in preparation for
her return to the transport cell. She knew the Command Nexus would solve the
problem and release her as soon as it was safe to do so. Minutes ticked by, but
the crawlway did not reappear. She broke communications discipline and signaled
a midlevel command system via one of her cerebral implants, but was
surprisingly ignored. As a minimum, she should have been reprimanded for ill
discipline. Even the bottom tier maintenance system, which she was authorized
to access, told her only that all nonessential activities were temporarily
suspended, but not why.

The mighty ship shuddered, slamming her
body against the hull wall. Dazed for a moment, she realized an acceleration
field hadn’t caught her! It was incomprehensible that in a ship able to
generate billions of such fields simultaneously, in any location, at any intensity,
she should be thrown against a hard surface. The implications filled her with
dread.

For the first time in her life, Nemza’ri
feared for the safety of the great ship.

Major Robert
Beckman raised his binoculars to study the North Dakota missile base through
snow covered trees. In the darkness, he could just make out a chain link fence
and a few isolated lights illuminating a concrete helo pad in front of three
squat, rectangular buildings. There was no movement, no guards, no sign of
life.

All killed by NGFs
, he decided.

Intel estimated Non-terrestrial Ground
Forces would have the birds fuelled in fifteen minutes and airborne two minutes
later. Eliminating mankind with its own WMDs seemed strangely ironic to
Beckman, even perplexing.

Why not just blast us from orbit?

The situation report he’d read at the start
of the mission indicated political and military leaderships all over the world
had been destroyed in the first minute. No surprises there, every orbital first
strike scenario had anticipated that. Even so, the sitrep indicated Air Force
One had taken off with a handful of survivors, only to be destroyed the first
time it tried signaling US military forces. Beckman guessed no one had told the
pilots about the paradigm shift. Only an idiot flies when the enemy has global
air supremacy, achieved with infinitely advanced technology.

Beckman motioned towards their objective,
then the two women and eight men of the contact team rose out of the snow
together and moved forward in two squads. Beckman led the first squad
comprising the mission specialists, while Master Sergeant Henry Hooper led the
force protection team in the second. Beckman was tall and athletic, with fair hair
and a lean build while Hooper was shorter and heavy set, with a gravel voice.
They’d served together in Delta, back when they’d had the edge in technology
and firepower, but that was a lifetime ago.

The team advanced in a skirmish line,
dressed in white camouflage suits insulated to mask their thermal signatures,
with weapons held at eye height sighting for targets. After months of hard
training, Beckman knew the strengths and weaknesses of each team member. There
was little to tell them apart in the snow at night, but Beckman knew Hooper’s
professionals would take the lead in any fight, while his mission specialists
would do the problem solving once the target was reached. Both squads were
equipped with the best conventional weapons ever invented, but it was the
“specials” that made them unique. They were smooth-skinned, silver weapons with
child-sized hand grips and sighting mechanisms intended for compound eyes. The
brains trust at Groom Lake had studied them for decades, discovering how to
fire the alien weapons, but little else. Beckman found it sobering to know the
world’s superpower had been reduced to the level of a mere scavenger, relying
on equipment salvaged from a handful of crashed wrecks.