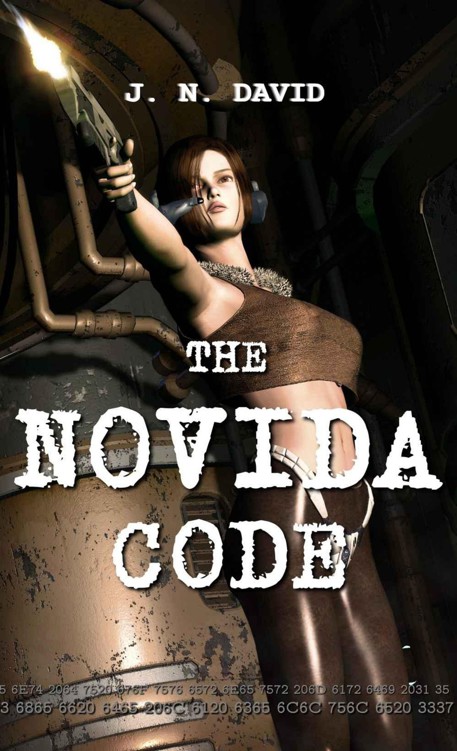 That night I dream of my beloved. We're on the beach where we first met, and we're making love. The air is so pure, the sand so fine and the gentle lapping of the sea so soothing as he comes inside me and I murmur his name for the first time… It's all etched in my memory, much more sharply than my name, my past, or even my life. That was the day he found out who I was. And I forgot.

The slogan is everywhere. On walls - chalked or sprayed - or on the ground, over countless flyers littering the floor. And in people's minds. The mind is essential. I understood that straight away.

I'm 25 and I'm off to take part in a meeting of the major resistance groups in a bid to draw up our policy and share intelligence. I represent the most powerful of these groups: the Novida group, named after its leader, the world's most famous resistance fighter: Simon Novida.

I'm 21 and I am trying to join the Resistance. I'm being interrogated by a cell. They find out about my past as a collaborator and turn me down.

I'm 18 and I learn about Earth's unconditional surrender to the invaders. I decide to become a collaborator.

I'm 15 and leaving home for the last time to go and live with my best friend Auxana. Because my stepfather comes into my bedroom at night and I can't take it anymore.

In 2 years, war will be declared.

In 3 years, the war will be lost and I'll become a collaborator in the new regime.

In 6 years, I'll have tried and failed to join the Resistance.

Following their rejection, I'll have created my own resistance group along with its fictitious leader: Simon Novida. I am Simon Novida, but nobody knows this.

My 15th birthday was the most important day of my life. That was my first victory. The first monster that I'd slain. My stepfather.

I hated that title. There was nothing fatherly about that man. He was despicable, a pervert. For months now he'd been trying to abuse me.

I didn't let him. I struggled, hit him, and yelled as soon as he came into the bedroom. When my mother came rushing up, he would say I'd had a nightmare. She'd go away without a word, not wanting to understand.

I'd tried several times to explain to her but she preferred to believe it was just bad dreams. I used to run away to stay with Auxana, my best friend, but the police would always find me and take me back home.

For them and for our friends and neighbours alike, the truth was perfectly straightforward. My stepfather was charming, polite and above all rich. I was just an awkward problem kid. Sulky, sullen and suspicious, forever running away, I didn't deserve such nice parents.

No one, not even my mother, took my side. Only Auxana believed me. At school, where everyone else avoided me, she was my only friend, and she'd even convinced her parents of the veracity of my accusations. Legally, they couldn't help me, but the support and affection I received from her family were what kept me going.

So I had to take matters into my own hands. As nobody believed me, I decided more subtle action was called for.

Several times I'd caught my stepfather in conversations hinting at certain illegal activities. I hacked into his crystals and eventually - the day before my birthday - found what I was looking for. I decided to wait until the following day to confront him in front of my mother.

That day, I was ready. I was waiting for them, alone, sitting on the sofa that had its back to the French windows. I wanted them to be dazzled by the light and my face to be in shadow. I waited in silence, my hands shaking slightly. At last the door opened. It was them. They were coming home with my presents and the shopping for my birthday meal.

My stepfather saw me first. He smiled, a nasty ironic glint in his eye: “How are you, darling?” He'd been using his term of endearment for quite some time now to show that he bore me no ill will for telling all those “lies” about him.

“Very well, thanks”, I replied with a smile. He was astonished. I'd stopped smiling a long time ago. But he was unruffled. He calmly continued on his way to the kitchen to put away the shopping.

My mother followed him in and smiled at me as she walked past without a word. She looked shattered. This constant clash between her husband and her daughter was wearing her down. I loved her in spite of everything but just wished she'd understand there are some things that can't be negotiated. Things that are so wrong you have to take a stand against them. It hurt me, far more even than being treated by everyone like a pariah and a liar. For her to know, and yet do nothing.

I waited for them to return to the sitting room. My stepfather came in first. He used to contrive opportunities to be alone with me. He got a kick out of my fear, the way I shrank away from him. But this time I was calm.

He sat down on the sofa opposite me and smiled: “How was your day, my darling?”

“Fine”, I replied, gritting my teeth for all I was worth. But it was essential to keep cool. I'd learnt the hard way that nobody listens if you yell. “I learnt a lot…”

“
That's good.” He turned back towards my mother, who was coming into the room. “Our little Lauren has learnt a lot at school today.” He knew how I hated him talking about me like a little girl, and loved provoking me into losing my cool. But I'd promised myself never to lose my cool again.

“
I wasn't talking about school.” My mother instantly recognized my tone. She'd been a witness to our rows for so long: “You can tell us about it later, dear. We need to prepare your birthday meal.”

But my stepfather persisted: “What do you mean, my darling?”

I took my time in replying. I wanted to savour this moment. I was boiling inside with hatred but on the outside, I was calm. I wasn't going to spoil everything. My stepfather was staring at me with his fake smile while my mother watched us both with a look of dismay.

At last, I replied: “I learnt a lot about you, Léon.” He was still smiling. “What do you mean, about me?” I think he honestly had no idea that I could hurt him. He too had ended up believing that I was a failure, a loser, a pathetic mythomaniac.

“Well, for example, I learned that your fantastic fortune was built on a house of cards.”

He laughed: “You poor darling! You're still living in a dream world. I think it's time to call a psychiatrist.” He got up and switched on the comm unit.

My mother shouted, “Please don't, darling, she can't help it, please!” She was grabbing him by the arm and pleading. I supposed he was calling one of his psychiatrist friends. He knew everyone. No doubt, the psychiatrist would have confirmed his version of my mental state.

He stopped, turned toward me and looked at me for a moment. Then his smile returned: “What proof? I haven't the faintest idea what you could possibly be talking about.” But he never finished his call. This time, I had all his attention.

“…
So?” He was speaking calmly, but for the first time I saw fear in his eyes.

“
It's very similar to the one you showed your partners, except the original doesn't name you as the legal owner. I think the correct term for you is beneficial owner.”

My mother interrupted: “What on earth do you mean, Lauren?”

“I mean that our dear Léon doesn't own the properties he's based his company on. He can't sell them and he has no right to mortgage them like he did.” I added, enunciating each syllable with relish: “It's illegal.”

“
Rotten little bitch! What have you done with it?”

“
Made copies, loads of copies that are safely hidden, and which I won't hesitate to disclose if you carry on with your call.”

He sat down again facing me, his face red and contorted with rage.

“
I want you to rot in jail. But that isn't going to happen. You're too crafty, you'll certainly have covered your tracks and you'll be able to pretend you didn't know what was going on, or something. I know you're very pally with Judge Williams…”

“
So, I'll just quietly keep those documents under lock and key, and I'm leaving to live with my friend Auxana. And this time, there'll be no police coming to fetch me…”

“
Don't be an idiot Léon. You'll get by, but your company will suffer. You're going to lose money, a lot of money. And nobody wants that, do they?”

He remained silent and I smiled. My first proper smile for months. We all knew I'd won. I got up to pack my bags in my room. I decided to take with me anything I wanted to keep, as I had no doubt he'd take it out on my things as soon as I'd gone.

My mother followed me into my bedroom, where I was already packing my suitcase.

“
I'm begging you Lauren, please don't do this.” Her eyes lowered, unable to look at me, my mum was aloof and distant, standing stiffly against the door. It hurt, but I ignored her. She went on: “Don't destroy our family.”

I finally looked up at her: “Mum, you're the one who's destroyed our family. When you let your new husband hurt me.”

At last, she looked up at me, her eyes brimming with tears: “I'm not like you Lauren. I can't fight back all the time.”

I looked at her at length, then replied: “Well Mum, I'm the way I am, and I don't allow people to rape me.”

Without a backward glance, I added, “I wasn't asking you to fight back all the time, Mum. Just this once, to save your daughter.”

I left without waiting for a reply. In any case, I knew not to expect one. I left home that evening and moved in with Auxana. With their usual foresight, her parents had prepared a birthday meal for me, with a wonderful chocolate cake. Auxana must have told her mother it was my favourite.

Nobody mentioned my situation. Auxana, her brother and her parents had organized the party as if I belonged to their family.

I gazed at the birthday lights flickering around me and unwrapped my presents with shrieks of delight.

To tell the truth, I couldn't really enjoy the party that much, but just being there with them meant a lot to me. I no longer had a family but I wasn't alone. And I knew I'd never forget this.

The Earth surrendered on 17 May 2065. Unconditionally.

The war had been going from bad to worse for several months but we never thought to see such a capitulation.
Only a year earlier, our sole concern was to find a university that met both our requirements: Lauren wished to study Medicine and I had opted for History of Art.

With the announcement of the invasion our whole future went up in smoke. When we saw the huge technical superiority of our alien enemies, we understood. Without ever having set eyes on them, the papers had depicted the invaders as grotesque, semi-rational beings, and assured their readers of a swift victory. But Lauren didn't believe this. After all, they were currently invading us, and we hadn't even ventured beyond the nearest solar systems.