Read The One For Me - January Cove Book 1 Online

The One For Me - January Cove Book 1 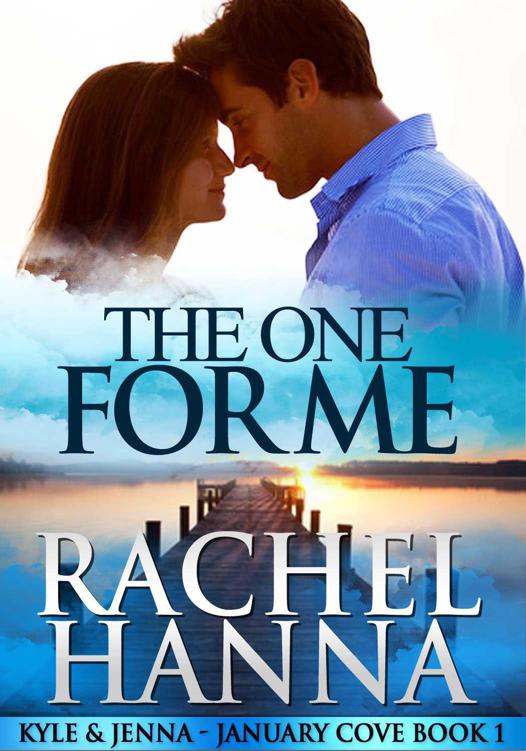 The One For Me

Other books by Rachel Hanna:

Love In The Falls

Get updates on NEW RELEASES and promotions by signing up for Rachel Hanna's “Loyal Reader Update List”!

The ocean waves crashed to the shore, and her heart pounded. She’d never kissed a boy before, and certainly not one this good looking. Every girl in school wanted him, and he’d chosen her.

She climbed gingerly up the rock, hoping like heck she didn’t slip and look like a fool. Her parents would kill her if they knew where she was right now. They didn’t like him. He was too adventurous. Too wild. Too loud. And his mother was single. She would never understand why that mattered at all.

“Are you cold?” he asked.  He was always making sure she was okay. He carried her books to class for her. He held her hand when she gave blood at school last week. And yet he hadn’t kissed her. Did he even want to?

“No, I’m fine. It’s beautiful out here today,” she said trying to hide the anxiety in her voice. Most of her friends had kissed a boy by now. She was almost fifteen years old, after all. Sissy Crawford had kissed three boys already. One was ugly, but she still kissed him trying to improve her odds of finding Mr. Right.

He snuggled up against her and they laid back against the rock, looking up at the cloudless blue sky. It was early spring, and the ocean breeze was crisp and cool. Not many people were on Emerald Cove Beach today, and that’s just the way she wanted it.

“Do you think Mrs. Gill will notice we’re gone?” she asked with a hint of anxiety in her voice.

“Nah. She’s so focused on teaching Spanish, she probably won’t even realize we’re not there.”

“Maybe we shouldn’t have skipped,” she said.

“I couldn’t help it,” he whispered in her ear. The heat of his breath made her feel tingly all over. “I had to spend some time with you alone. Seeing you in the hall at school isn’t cutting it anymore.” She looked over at him and smiled.

“I wanted to be alone with you too,” she said softly. “And my parents won’t ever leave us alone when you come to my house.”

“I guess that’s what parents do,” he said. Her parents were going above and beyond in their efforts to “protect” their only daughter. Sitting with your mother and father while you watch a movie with your new boyfriend was not her idea of fun.

They sat a few moments longer, and she closed her eyes. Listening to the waves was always calming to her. The sea gulls squawked overhead, and maybe that’s why she didn’t hear him at first.

He leaned in and wrapped his arm over her waist as his mouth came down on hers. The warmth of his lips wrapped around her heart like a warm glove. At first awkward, she joined in the kiss allowing her lips to part and accept him.

And in that moment, Jenna Davis knew. She knew that Kyle Parker, popular jock and class clown, would be in her heart forever. She just didn’t know how long and winding that journey would end up being for them both.

Kyle Parker pulled into the driveway of his mother’s real estate company and sat in his car, staring at the front of the brick building. For a moment, he was transported back in time, thinking of the time when he was a small child running around in the hallways of the large, stately brick office in the square of January Cove.

Living on the coast of Georgia had provided an idyllic childhood in most respects, but it hadn’t always been easy for his family. Widowed at thirty-five years old, Adele Parker had raised five kids on her own. Kyle was the second oldest child, just after his brother, Jackson. Not having a father had certainly made him closer to his mother, but it had also penned him in somewhat.

Feeling like his mother needed him to help her run the real estate company, Kyle knew that he’d stayed too long already. His dreams weren’t housed in the old brick building, full of files and paperwork. His dreams were more about lumber and brick and mortar. As the owner of his new real estate investment company, Kyle had already bought and sold three homes in the last year, renovating each one for a profit.

Kyle knew that it was time to break away from the “family business” and go out on his own. Adele wouldn’t be mad at him, quite the opposite, actually. Instead, she would do what she always did and wish him well. She’d always wanted only the best for her kids, and she would go out of her way to make sure they were happy.

Losing his father when he was only ten years old had been hard on Kyle. When his Dad was killed in a car accident, the whole family changed. His mother had to take over as the sole breadwinner while he and his older brother became fathers to three smaller children.

After working with his mother in the real estate company for the last ten years, Kyle had decided it was finally time to venture out on his own. Although he’d started his real estate investment company less than two years ago, he'd already bought and sold several houses and renovated them. In fact, he was becoming quite well-known in January Cove as the person to go to if you were in trouble. People who had suffered through job loss or other economic situations often called on Kyle to buy their house out of foreclosure. He worked with many different kinds of real estate situations from pre-foreclosures to short sales, and he was known as being someone who was fair.
Kyle would do anything that would make money because he had a huge entrepreneurial spirit. He’d always been the adventurous one of the bunch, but he definitely focused himself when it came to business. Making sure that he never had to suffer again through economic hardship like his mother did when they were children, Kyle always made sure to protect his family and give money to his mom when and if she needed it.
Of course, Adele Parker was not one who would ever ask for a handout. After her husband died, she pulled herself together within the first year and got her real estate license. Building the company from scratch with only a high school education, Adele became well known in January Cove and the surrounding areas as being one of the best businesswomen around.

As Kyle got out of the car and made the short walk into the brick building, he thought about how his mother might react when she found out that he was finally leaving the company for good and striking out on his own. Adele Parker had always wanted only the best for her children, and she’d done anything she had to do to make sure that their lives were good and useful in the community. He hoped that she wouldn't be too disappointed in him for leaving the company, but in his heart he knew that she'd be proud of him for doing something on his own.

The three-story brick building has been standing in January Cove since the late 1800s. Adele had gotten a great deal on it when she bought it out of foreclosure almost twenty-five years ago. Thankfully, their father had a small life insurance policy from his employer when he’d passed away in a car accident. Because of this, Adele was able to take care of the children without any income for the first year after his death. She was also able to put a small down payment on the building which she’d finally paid off about ten years after purchasing it.

"Good morning, Kyle," said the receptionist at the front desk named Lily. She was the perkiest receptionist they’d had at the real estate company in the last few years, and many of the men around town often came into the office just to see Lily. However, she was quite demure and homely for someone with such great looks. Kyle had made a decision long ago never to date anyone in the office, especially since he was one of the company owners. But, she was fun to look at.

"Good morning, Lily," Kyle said with a smile. She smiled back, which always let him know that she was interested in him, but he tried not to let it go any further than that after dating one of the former receptionists early on in his career. He quickly learned that feelings and office matters didn't mix very well.

After picking up his mail downstairs, Kyle went up the spiral staircase in the back corner of the building as he usually did. There was another staircase, but Kyle enjoyed going up the old spiral staircase because it was so unique. He loved these kinds of architectural details which was probably one of the reasons why he got into rehabbing houses in the first place. The idea of turning a fixer upper house into a real home for a new family was both daunting and exciting at the same time.

As he made his way up to the second floor, he walked to his mother's office which was on the far end of the building. She’d splurged a few years ago and made her office into exactly what she’d wanted, ornate and gaudy. Adele Parker was quite a character, and her style choices were all her own.

When he walked into a Adele's office, he found her sitting behind the desk as she usually was, going over a multitude of contracts. As the head broker, she was at the helm of about twenty agents who worked in January Cove. These agents had been with her for a long time, and they were a force to be reckoned with. Adele was a strong trainer when it came to real estate, and she’d taught all of her agents to right way to market themselves.

"Hey, Mom," Kyle said as he walked behind the desk and kissed his mother on the cheek. She smiled up as usual with her perky blonde hair and bright blue eyes.

"Good morning, son," Adele said. "To what do I owe this pleasure? I thought you were taking the day off."

"Well, I had something I wanted to talk to you about, and I figured it’d be better to go ahead and get it over with now."

"That doesn't sound good," she said with a smile.

"It's not bad news, and I think you know it's coming. Look, Mom, I’ve had a wonderful time working with you here for the last ten years, but you know that my investment company is taking up more and more of my time…"

"I know exactly what you're talking about, Kyle. You don't have to worry about it. I know that you want to strike out on your own and build your new company. It's okay, son, you don't have to feel guilty about it. I knew this day was coming. And, I'm so proud of you for doing something on your own and building a business. You're going to want that one day when you get married.”

The Jealous One by Celia Fremlin
Princeps' fury by Jim Butcher
Hey There (You with the Gun in Your Hand) by Robert J. Randisi
The Stones Cry Out by Sibella Giorello
PENETRATE (The Portals of Time Book 1) by Jackie Ivie
The Christmas Secret by Julia London
Mission Compromised by Oliver North
The Liar by Nora Roberts
Dark Matter by John Rollason
Maggie's Breakfast by Gabriel Walsh