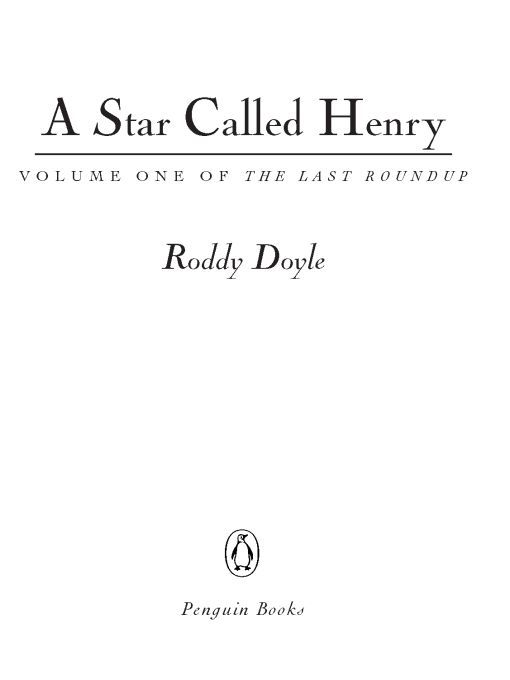 Table of Contents
PENGUIN BOOKS
Title Page
Copyright Page
Dedication
Part 1
One
Two
Three
Four
Five
Part 2
Six
Part 3
Seven
Eight
Nine
Ten
Part 4
Eleven
Twelve
Praise for
A Star Called Henry
An American Library Association Notable Book
“This novel proves that Roddy Doyle can do it all: it’s rip-roaring, page-turning, blood-and-thunder entertainment . . . but it’s a considerable work of literature as well, an impressive heir to O’Connor, O’Casey, and Yeats, compassionate, thoughtful, and wise.”
—
The Washington Post Book World
“Inspired by Charles Dickens, Peter Carey, Günter Grass, and Salman Rushdie, Doyle . . . has done no less than dismantle some of the founding myths of twentieth-century Irish nationalism.”—Alan Riding,
The New York Times
“Brilliant . . . ferociously powerful; Doyle captures the desperation of the slums with the intimate authenticity of a poet.”
—
The Boston Sunday Globe
“A luminescent
Bildungsroman
. . . the kind of book you can’t wait to finish, but don’t want to end. . . .
A Star Called Henry
is virtually flawless, a minor masterpiece.”
—
The Seattle Times
“Sheer poetry . . . Doyle . . . shows again and again that the heart of his characters, the beauty and the vulnerability, comes from the telling of the story. . . . And Henry is just the man to tell us what we need to understand the history of Ireland.”
—
San Francisco Chronicle
“Doyle handles this ambitious, lofty pairing of history and fiction beautifully. . . .
A Star Called Henry
is Doyle at his most Joycean—ribald and gritty, marvelously in tune with his characters’ voices and, most of all, unwaveringly dedicated to Ireland. It is a magnificent novel.”
—
Time Out New York
“Riveting . . . wonderfully resonant. . . . This fascinating, unpredictable, and fast-paced story, written in the colloquial language of Dublin, is a bold music played on the roughest of instruments, a tune that sways between tragic irony and wild comedy.”—
Minneapolis Star Tribune
“Some books sweep you into the embrace of their arms and do not let you go. Roddy Doyle’s sixth novel,
A Star Called Henry
, is of that breed—compelling, original, devastating, funny, a masterwork, an instant classic. It’s as if Doyle has reinvented language and the way a story gets told. . . . It is all vivid, vulgar, chilling, witty, but most of all—and this is Doyle’s genius—
A Star Called Henry
is hugely tender, a book that comes from a wise and empathetic heart.”
—
The Baltimore Sun
“Rousing . . . Stellar . . . What’s amazing is that Doyle propels his marvelously researched historical account . . . with the same quick-witted colloquialism and visceral prose that made his other novels . . . such canny delights.”
—
Entertainment Weekly
“Doyle here . . . [tries] his hand at Irish epic, and he wields the style like a sword, with the power and grace of a master.”
—
The Village Voice
“Remarkable . . . as a portrait of one very memorable Irishman, and as a soulful and unflinching view of Irish history,
A Star Called Henry
delights on every page. . . . Doyle’s development as a serious and important novelist is itself a notable and heartening aspect of Irish history, and it’s unimaginable that anyone who reads this first volume won’t eagerly anticipate the next.”
—The San Diego Tribune
“Doyle’s sheer talent as a storyteller . . . is awesome.”
—Richard Bernstein,
The New York Times
“One of Ireland’s preeminent novelists . . . Doyle, like Henry, ultimately seduces, and his reader has no choice but to follow.”
—
The Chicago Tribune
“A wonderfully entertaining historical novel, full of romance and incident, sex and intrigue, nonsense and wisdom.”
—
New York Newsday
“The much-loved Irish author breaks impressive new ground with this masterly portrayal of the making of an IRA terrorist. . . . Absolutely extraordinary. Readers who thought Doyle has outdone himself with the deftly juxtaposed comedy and drama in his recent fiction will be amazed and delighted all over again.”—
Kirkus Reviews
(starred review)
“Doyle just gets better and better. . . . This is history evoked on an intimate and yet earth-shaking scale, with a huge dash of the blarney, some mythical embellishments and a driving narrative that never falters. . . . Maybe the Great American Novel remains to be written, but on the evidence of its first installment, this is the epic Irish one, created at a high pitch of eloquence.”—
Publishers Weekly
(starred review)
PENGUIN BOOKS
A STAR CALLED HENRY
Roddy Doyle is the author of six novels. The first three—
The Commitments
,
The Snapper
, and 1991 Booker Prize nominee
The Van
—are available both singly and in one volume as
The Barrytown Trilogy
, published by Penguin. In 1993
Paddy Clarke Ha Ha Ha
won the Booker Prize and became an international bestseller. Doyle’s next novel was the acclaimed
The Woman Who Walked Into Doors
which was also a bestseller and was followed by
A Star Called Henry
. Doyle has also written for the stage and the screen: the plays
Brownbread
and
War
; the film adaptations of
The Commitments
(as co-writer),
The Snapper
, and
The Van
;
Stolen Nights
(an original screenplay); the four-part television series
Family
for the BBC; and the television play
Hell for Leather
. Roddy Doyle is also the author of the children’s book
The Giggler Treatment
. He lives in Dublin.
To request Penguin Readers Guides by mail (while supplies last), please call (800) 778-6425.
To access Penguin Readers Guides online, visit our Web site at
www.penguinputnam.com
By the same author
Novels
The Commitments
The Snapper
The Van
Paddy Clarke Ha Ha Ha
The Woman Who Walked Into Doors
Plays
Brownbread
War 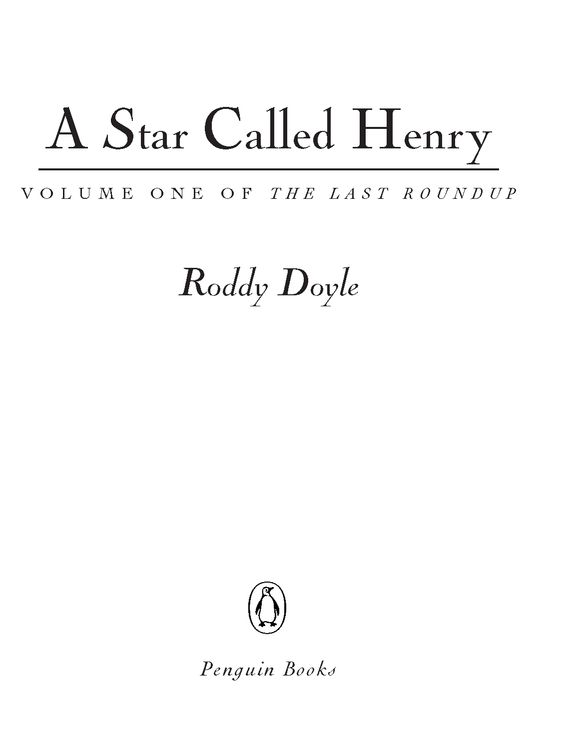 This book is dedicated to
Kate
Heaven—
I’m in heaven—
And my heart beats so
That I can hardly
Speak.
—IRVING BERLIN
Part 1
One
M
y mother looked up at the stars. There were plenty of them up there. She lifted her hand. It swayed as she chose one. Her finger pointed.
—There’s my little Henry up there. Look it.
I looked, her other little Henry sitting beside her on the step. I looked up and hated him. She held me but she looked up at her twinkling boy. Poor me beside her, pale and red-eyed, held together by rashes and sores. A stomach crying to be filled, bare feet aching like an old, old man’s. Me, a shocking substitute for the little Henry who’d been too good for this world, the Henry God had wanted for himself. Poor me.
And poor Mother. She sat on that step and other crumbling steps and watched her other babies joining Henry. Little Gracie, Lil, Victor, another little Victor. The ones I remember. There were others, and early others sent to Limbo; they came and went before they could be named. God took them all. He needed them all up there to light the night. He left her plenty, though. The ugly ones, the noisy ones, the ones He didn’t want - the ones that would never stay fed.
Poor Mother. She wasn’t much more than twenty when she gazed up at little twinkling Henry but she was already old, already decomposing, ruined beyond repair, good for some more babies, then finished.
Poor Mammy. Her own mother was a leathery old witch, but was probably less than forty. She poked me, as if to prove that I was there.
—You’re big, she said.
She was accusing me, weighing me, planning to take some of me back. Always wrapped in her black shawl, she always smelt of rotten meat and herrings - it was a sweat on her. Always with a book under the shawl, the complete works of Shakespeare or something by Tolstoy. Nash was her name but I don’t know what she called herself before she married her dead husband. She’d no Christian name that I ever heard. Granny Nash was all she ever was. I don’t know where she came from; I don’t remember an accent. Wrapped in her sweating black shawl, she could have crept out of any century. She might have walked from Roscommon or Clare, pushed on by the stench of the blight, walked across the country till she saw the stone-eating smoke that lay over the piled, sagging fever-nests that made our beautiful city, walked in along the river, deeper and deeper, into the filth and shit, the noise and the money. A young country girl, never kissed, never touched, she was scared, she was thrilled. She turned around and back around and saw the four corners of hell. Her heart cried for Leitrim but her tits sang for Dublin. She got down on her back and yelled at the sailors to form a queue. Frenchmen, Danes, Chinamen, the Yanks. I don’t know. A young country girl, a waif, just a child, aching for food. She’d left her family dead in a ditch, their chops green with grass juice, their bellies set to explode in the noonday sun. I don’t know any of this. She might have been Dublin-bred. Or she might have been foreign. A workhouse orphan, a nun gone wrong. Transported from Australia, too ugly and bad for Van Diemen’s Land. I don’t know. She’d become a witch by the time I saw her. Always with her head in a book, looking for spells. She shoved her face forward with ancient certainty, knew every thought behind my eyes. She knew how far evil could drop. She stared at me with her cannibal’s eyes and I had to dash down to the privy. Her eyes slammed the door after me.
And what do I know about poor Mother? Precious little. I know that she was Melody Nash. A beautiful name, promising so much. I know that she was born in Dublin and that she lived on Bolton Street. She worked in Mitchell’s rosary bead factory on Marlborough Street. They made the beads out of cows’ horns. All day, six days a week, sweating, going blind for God and Mitchell. Putting the holes in the beads for Jesus. Hands bleeding, eyes itching. Before she walked into my father.

Exile by Rebecca Lim
Dirty Dare: The Rescue (Sexy Suspense) (Part 1, spin-off to the Dirty and Dare Me series) by Leto, Julie
Meg's Best Man: A Montana Weekend Novella by Bruner, Cynthia
SEAL for Her Protection (SEALs of Coronado Book 1) by Paige Tyler
Rainbow Six (1997) by Clancy, Tom - Jack Ryan 09
More Than Her by McLean, Jay
A Pagan's Nightmare by Ray Blackston
The Centurion's Wife by Bunn, Davis, Oke, Janette
A Chance in the Night by Kimberly Van Meter
Out Through the Attic by Quincy J. Allen