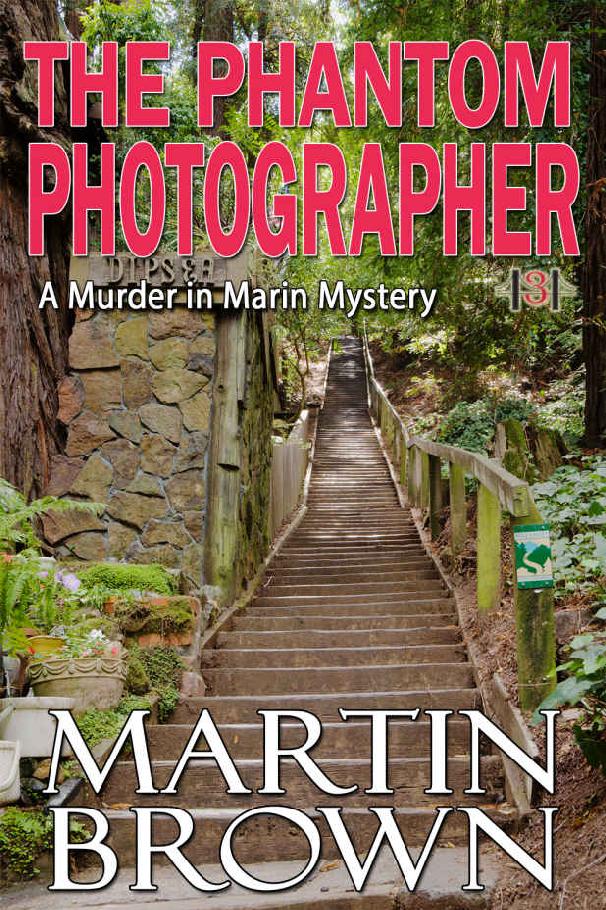 A
Murder in Marin
Mystery – Book 3

NOVELS IN THE MURDER IN MARIN SERIES

Michael Marks, camera always at the ready, was on the scene for every event in the picture-perfect town of Mill Valley.

For as long as most locals remembered, he was there every spring, catching children waving small American flags at the Memorial Day parade along Throckmorton. Every summer, he stood at the bottom of the Dipsea Steps, waiting for the start of the world-famous race. In the fall, he caught the steady stream of attendees wandering through the redwood groves of Old Mill Park during the annual art show; and in the winter, he memorialized countless smiles as Santa arrived at the Depot, the small town’s center, to the cheers of parents and the ever hopeful eyes of their children.

In addition to Michael’s expert handling of a camera, his charming manner, his quick wit, welcoming smile, and apparent good breeding, most agreed that no one in Mill Valley had a more generous nature or engaging personality.

Michael had made himself such a fixture at every special event that it was simply assumed he would be there. When the mayor one day was about to present a city proclamation to three women of the Mill Valley Historic Preservation Society for their years of service, he instinctively paused before beginning and asked his city clerk, Ethel Marion, “Where’s Michael?”

“He should be here; I spoke to him yesterday, and I know he was planning on joining us,” she replied.

Then everyone heard the sound of Michael pushing his substantial bulk up the back steps, and the mayor, his clerk, and the honorees all gave a sigh of relief, knowing that this important moment, like so many others, would be captured for the local newspaper,
The Mill Valley Standard
.

Michael was a big man. He was six-foot two and weighed approximately two-hundred and eighty-five pounds. He had a florid face that was spotted with beads of perspiration on days both warm and chilly. At the top of his head was a mop of brown hair that just in the past few years was flecked with wisps of gray. His smile revealed less than perfect teeth, faintly yellow with several misaligned; he was reluctant to smile broadly, despite encouraging others to do so.

Over the past dozen years, Michael had grown so frustrated in laying aside his size thirty-eight jeans, for size forty, forty-two, forty-four, and beyond, that he began wearing black cotton stretch pants that more generously covered his expanding girth. Here, too, he graduated from XXL to XXXL before resolving to give more thought to his diet.

Only his love of photography competed with his love of fine cuisine. From a favorite booth at D’Angelo, the always-popular Italian eatery opposite the Depot, to the comfortable bar at Bungalow 44, two blocks away, where he enjoyed California fusion cuisine, Michael was known wherever he went. On a less regular basis, he would go to the regionally popular, but extravagantly expensive, El Paseo.

Given that he was a sales associate at a local camera shop, there were many who thought that his dining choices were well beyond his financial means. But the polite consensus concluded that how Michael spent his money was no one’s business but his own.

Rob Timmons, publisher of the
Mill Valley Standard,
was likely the person most pleased that Michael was nearly always in town with a camera at the ready.

As Mill Valley’s only source for community news, the
Standard
was one of a group of four Marin County weekly newspapers, the first of which was
The Sausalito Standard
. With this first venture, Rob learned that the economics of community newspapers, in a world where print publications were already in constant financial peril, required constant vigilance. He watched like Scrooge the narrow line between profit and loss, but even with his careful disposition, it was difficult to provide a living for his family.

Necessity, as ever the mother of invention, brought Rob a needed moment of inspiration. He approached the owners of other struggling weeklies. In succession, he purchased, at a bargain price,
The Mill Valley Crier
,
The Peninsula News
, and the
Ross Valley Advertiser
, and put them under one umbrella. Different
Standard
editions landed in residential mailboxes on different days of the week. Sausalito on Wednesday, followed by Mill Valley on Thursday, The Peninsula, which covered the towns of Tiburon and Belvedere, on Friday, and finally the many small towns of Ross Valley on Saturday.

With a full-time staff of two, himself, and his production manager, Holly Cross, Rob knew the weekly paper’s only real chance of achieving a modest level of financial success was in creating other economies as well. First, the papers, all of which were printed as tabloids, shared a common core of twelve pages. The outside wrap, consisting of the cover, pages two, fifteen, and sixteen, would be unique to those communities with local photos and news reported on these pages.

The second ingredient for success was to have a string of volunteers to provide everything from coverage of planning commission meetings to reporting on social and civic events. On occasion, Rob got lucky and the late middle-aged, retired, local citizen who provided several news stories could snap a photograph as well. If not, he needed to search for a local volunteer photographer as well.

Rob was thankful that between Ted Dondero, a longtime Mill Valley resident, who abandoned his hopes of being a journalist for the steady pay and assured benefits of a high school teaching position; and Michael, who simply enjoyed having several of his photos featured and credited every week, all of his expectations were met.

Rob and Holly were always pleased to see Michael Marks. Their offices were located on the second floor of a two-story, century old walk-up on Sausalito’s Princess Street, just a few feet off Bridgeway, the town’s popular tourist street, which was crowded with restaurants, art galleries, bike rental kiosks, ice-cream stands, and T-shirt and souvenir shops.

Late in the afternoon on nearly every Tuesday, after the Sausalito edition had been sent off for printing and postal drop, Michael made his way up the steep steps to Rob and Holly’s cramped offices. His photos could be sent digitally; in fact, his Nikon camera, which hung around his shoulder most hours of the day, was equipped with Wi-Fi, making it possible for him to transmit his photos anywhere at any time. But Michael, a confirmed bachelor, enjoyed the chance for socialization, and Rob and Holly always put aside a small portion of time on one of their busy workdays for a guy they both regarded as fascinating. The official reason for the visit was to review photos of the past week that might be applicable for one of the three pages set aside for Mill Valley news.

One aspect of these meetings would be seeing several of the pictures that Michael had done using his telephoto lens that caught an individual, a couple, or a parent and child, from a great distance without showing any identifying characteristics that might create a usage issue. An older couple walking hand in hand over the small ancient bridge that spans Old Mill Creek, a father pushing a son or daughter on a swing, two young lovers kissing at a picnic table hidden partially by the shadows cast by the massive redwood trees surrounding them.

The photo box feature was called, “Hidden Mill Valley: Life Caught in the Moment.” It was popular with locals for creating a weekly guessing game as to whom Michael had caught. And a financial benefit to Michael, because many of those photos were made into framed prints, and some into note cards that were sold in a variety of Mill Valley shops and made available during the annual art festival.

Rob was happy to have a local feature like “Caught in the Moment” that could fill half or more of a page on a slow news week. Michael was so proud of the feature that he purchased a special easy-use digital camera that had a sixty-five-times zoom view, allowing him to catch special moments at a considerable distance.

Rob, Holly, and Michael all delighted in coming up with clever captions for their picture of the week feature. Additionally, Michael regularly provided photos of all the important moments in the town’s life

It was a mutually beneficial relationship. Michael’s reputation as the Mill Valley photographer of record was burnished by the simple fact that his photos appeared weekly in the local newspaper. Without the
Standard
, many might have dismissed Michael as a hobbyist, as opposed to a welcomed documentarian.

Most meetings of the three ended in the same fashion; after the weekly photos had been chosen, Michael would offer to buy the two of them a pizza at Giovanni’s…steps away from the office’s front door, but most times Rob and Holly declined, insisting that they had too much work still remaining.

On occasion, Michael suggested that he had errands to run nearby and he could rendezvous with them in another hour or two. When he returned, close to six, he and Rob and Holly would go off to the No Name Bar, just two blocks north on Bridgeway, for a badly needed cocktail.

The following morning, Holly and Rob invariably spent the first ten minutes of their day speculating about Michael’s life beyond his photographs.

“He’s such a great guy,” Holly began. “I appreciate the fact that he’s always offering to buy us a drink.”

“I know! We’re really lucky to have him.”

Often, their brief conversations would lead to speculation as to what Michael did to afford the lifestyle of a gadfly, whose only apparent passion was taking photographs.

“I have no idea how he makes ends meet, but I’m certainly glad that he brings us great photos,” Rob said confidently.