The Pig Goes to Hog Heaven 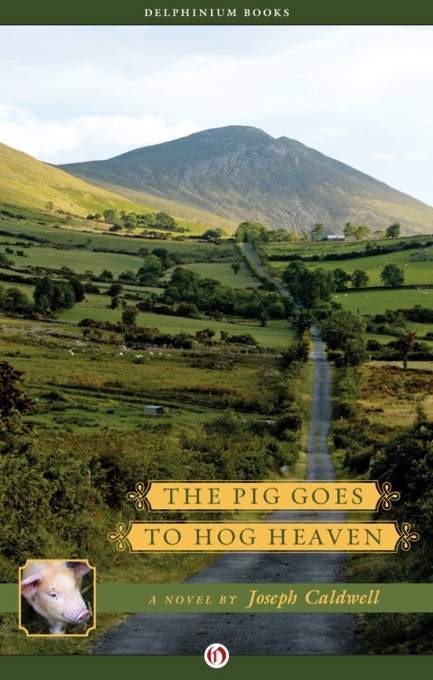 The Pig Goes
to Hog Heaven

A
LSO BY
J
OSEPH CALDWELL

The Pig Comes to Dinner

The Pig Did It

Bread for the Baker's Child

The Uncle From Rome

Under the Dog Star

The Deer at the River

In Such Dark Places

The King and the Queen of Glory

Clay for the Statues of Saints

To
My Mother
Whose all-purpose expletive
âin wonder or in wrathâ
was
“Glory be to Saint Patrick!”

The reader should assume that the native Irish characters in this tale, when speaking among themselves, are speaking Irish, the first language of those living in County Kerry, Ireland, where the action takes place. What is offered here are American equivalents. When someone ignorant of the language is present, the characters resort to English.

A
aron McCloud, a reasonably young American writer as yet undistracted by fame or fortune, had come to Ireland, to County Kerry, to the shores of the Western Sea, to bewail the refusal of an inordinately plain woman to cooperate in his determination that he become the object of her undying love. However, through the inexplicable offices of a wayward and willful pig, he had, before his anguish had found meaningful expression, fallen in love withâand subsequently marriedâan inordinately beautiful auburn-haired Kerry swineherd, Lolly McKeever. Then, to further remove him from his American routine, Lolly, possibly through an osmosis derived from the age-old supposition that in marriage the two become as one, decided to become a writer, leaving Aaron to slop her pigs.

This he had done, not without satisfaction. Swine-herding, he discovered, had more similarities than he had suspected to the writing of a novel: an unremitting commitment, an unrelenting discipline, an uncertain outcome, and, ultimately, the unpredictable prospects when the time for marketing arrived.

For Aaron the swineherd, that day had come to pass. And it proved to be quite possibly the greatest triumph of his life. Riding now in the emptied truck, his adored wife driving at his side through the narrow roads of County Kerry, he had no means to suppress the euphoria surging through him. The sale of the pigs, fed and fattened under his tuition, had brought in profits well beyond even his wife's encouraging expectations.

His writing, two novels completed in his thirty-two years, had not gone unnoted, but they came nowhere near the remuneration the slaughterhouse had just forked over. In truth, this was the result he had obsessively longed for. A few semi-favorable reviews and an obscure prize were all well and good, but to have one's laborsâeither as a writer or as a swineherdâgiven such an extravagant evaluation provoked in him a retroactive satisfaction for all the pig-filled days and nights when failure was a constant threat, fidelity its own reward, and marketing possibilities the source of an unbearable apprehension.

To intensify his euphoria, there had arrived that very morning an e-mail from a Dublin literary agentâthe same woman who had steered Aaron's Irish aunt Kitty, also a novelist, to heights of renown, a pinnacle Aaron, in his more delusional moments, had presumed to be reserved for himself. That his wife would ascend in the same direction as his aunt was a thought he'd done his faltering best to avoid, but the fear, thank God, proved unfounded. The agent, to Aaron's intermittently shame-filled relief, had been somewhat impolitic.

“Lolly McKeever,” the e-mail began. (Lolly had submitted the manuscript under her birth name, not wanting to be confused with Kitty McCloud.) “I have read with some interest the novel you so kindly sent, and which will be returned to you shortly through the post. It is beyond doubt the most regressive tale about Ireland, about the Irish, written by a citizen of this country within the previous century or, quite possibly, within more than several centuries past. A haunted castle? Whatever were you thinking? And the ghosts, we are asked to believe, are actually present, not even justifying their appearance as the objects of a fevered brain. Soon you will be writing about leprechauns and little people and pots of gold and Hags and Seers and kingdoms hidden under the earth. Forgive meâor, rather, don't forgive meâbecause it must be said: You've disgraced your native land and all the people in it. And your attitude toward the Anglo-Ascendancy? Cannot the past be relegated to the past? Are we expected to have our righteous wrath aroused by misdeeds committed so many years ago? Have we not advanced beyond the eternal cries against wrongs inflicted upon our ancestors long departed? Please allow me to offer some explanation for your misguided efforts. I have been informed that your husband, Aaron McCloud, nephew of the estimable Kitty McCloud, is an American and reputed to be a writer. It is my surmise that he, not you, wrote this abomination. No one native-born in Erin could possibly be so ignorant of what Ireland is and who the Irish are. Only an American of Irish descentâstill wallowing in complaints long since exhaustedâwould dare to insult current Irish sophistication by claiming that ghosts roam the land and are seen and accepted by adults educated in Irish schools and reared in modern Irish ways. Only an American, whose people abandoned Ireland in distant times, would promote a sense of outrage against the English to whom we are now reconciled except for some sullen Catholics in the north. The British, after all, have become our most active trading partner and a ready market for Irish exports. I do hope this exoneration, this naming of your American husband, is, for your sake, applicable. Allow me, in charity, to assume so.

“One thing more: I suggest that your husband renounce all literary pretensions and, with your assistance and at your insistence, invite youâa born Irishwoman with, no doubt, tales of her own to tellâto take his place at the computer while he becomes, for once and forever, a keeper of pigs. I most strongly propose it. The future of Irish letters demands it. Most sincerely, Fiona O'Toole.”

During her time as a writer, Lolly, if she had not lost all her mirth, had been deprived of a goodly portion of her characteristic enjoyment of calamity. Uncertainty and doubt, as well as fears for her self-sufficiency, were emotions so new to her that she lacked the equipment to control, if not conquer, them. Only when, with cheerful impatience, she had been schooling Aaron in the joys of slopping pigs did she again become herself, a reversion now completed, thanks to Ms. O'Toole's brutality.

Rather than dismiss the woman's words as the blind and ignorant rant of an obvious incompetentâa reaction Aaron himself had had to resort to on more than one occasionâLolly had, with raucous delight, required her husband to repeat out loud choice passages that intensified her hilarity and heightened the pitch of her laughter. She was, however, disappointed that Ms. O'Toole had failed to properly disdain the plot's resolution: to be rid of the ghosts, blow up the castle. This absurd denouement had been suggested by Kitty and her husband, Kieran, when Lolly had appealed to them for some way to bring the entire debacle to an acceptable conclusion And the absurdity increased when they further suggested that gunpowder was already planted in the flagstones of the castle's great hall. Lolly was embarrassed by this want of invention, but, innocent that she was, she did as she was told. Why had the agent not remarked on this obvious failure of the imagination?

But when Lolly had said to Aaron, “Read again the part about it must have been you who wrote it. That part.”

“I think once is enough, thank you.”

As the drive continued, he felt even more acutely an unease that had earlier intruded on his present satisfactions. With the delivery of the pigs that had so greatly benefited from his ministrations, and with the unmourned novel's ruthless demise, he and Lolly would now return to their previous callings, he to his computer, she to her pigs. Why he failed to feel all that eager to get on with his career was a subject he preferred not to examine. He would concentrate, as much as possible, on the day's triumph, with an unarticulated promise that, if necessary, he would allow the source of his unease to reveal itself at a time of its own choosingâwhich, if he were lucky, would be never.

Intentional or not, their present seating in the cab of the truck symbolized the day's reversion: On the way to market, with the pigs on board, Aaron had driven. Now, as they moved along the road with their lightened load, Lolly was driving.

They had gone some distance when Aaron realized they were not headed for home, where the surviving pigs would be protesting the delay in their scheduled feeding. He had become aware that the truck was coming not just close to where the cliffs fronted the sea, but to the site where Aaron's Aunt Kitty's house once had stood. The altered landscape was now marked by a wave-battered cove; the house itself, as well as the garden, pasture, and an empty grave, had long been drawn down and swallowed by an adamant sea.

“Where are we going?” he asked.

“You'll see when we get there.”

“You're going to where the house used to be. I can tell.”

“If you can tell, what need is there for me to do the same?”

“But why do you want to go there?”

“There's nothing there. Just the cliff and the sea and not even the land where the house used to be.”

“If there's nothing there, why object?”

“Maybe I have no reason.”

“You always have a reason.”

“There's a first time for everything.”

When her husband failed to challenge her further, Lolly decided to apply a mild goad. “I don't have to tell you everything. Can't I have reasons of my own?”

They were getting closer to the sea. Aaron sat up straighter in the passenger seat and examined his wife's face in the rearview mirror. She was as exquisite as ever. As he watched, she reached up and smoothed an eyebrow that had no need of attention. She puckered then relaxed her lips. They were, as they had always been, full and luscious. Surely he was the most fortunate of men. He returned his gaze to the road ahead. This was the woman who loved him. Him. Aaron McCloud. Rather than ask outright for some verification of her affections, he said, “Is it because that's where we realized we were in love? Is that why?”

Lolly answered with a noncommittal no.

“Is it because you want to see if anything of the house has washed back onto shore?”