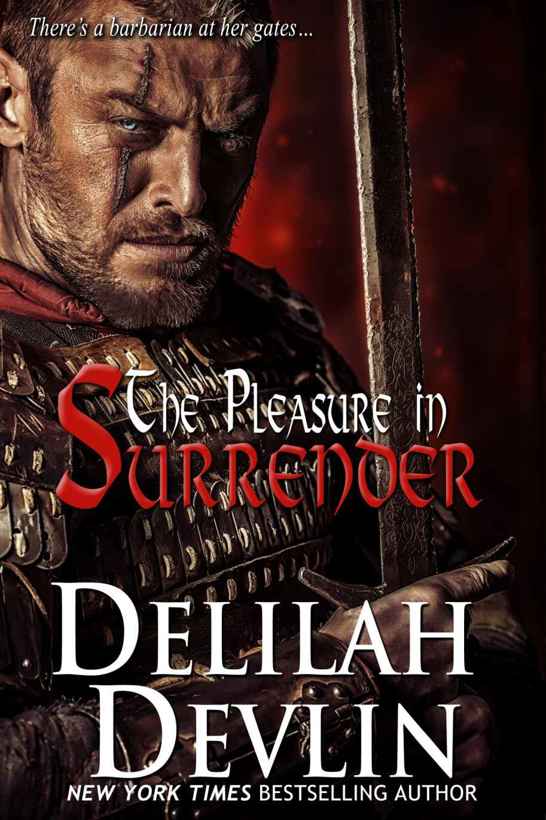 After the lady of the keep bars her gates to the barbarian the king commands she wed, the half-Viking knight scales the walls of her heart…

Note: This 5700-word short story was previously published as part of the HOT HIGHLANDERS AND WILD WARRIORS anthology. It may be short in length, but it’s not short in passion!

For more short stories by Delilah Devlin, check out:

Dreaming by the Sea

Night at the Wax Museum

To those of you who’ve read me before—hello, friends! To new readers, welcome to my world!

As you’ll discover, I tend to bounce around in different genres, from contemporary to historical to paranormal to sci-fi—all are very sexy,
so be warned
. I also write in many lengths from short story to full-length novel. If you can’t tell, I love to write. And when a story is fast, it’s short. If my characters need more pages, well, you get the picture. I’m a slave to my muses (I have three—or so three different psychics have told me!).

I love hearing from readers, and have a very active blog and Facebook friend page. I run contests, talk about my favorite TV shows, what I collect, what drives me crazy. I ramble a bit. I’m doing it right now. But if you’d like to learn more about me and what I’m doing or writing about, be sure to check out the “About Delilah Devlin” page after the story.

And if you enjoy
this
story, please consider leaving a review on your favorite retail site or simply tell a friend. Readers do influence other readers. We have to trust someone to tell us whether we’ll have fun when we open a new story!

Visit
www.DelilahDevlin.com
for more titles and release dates and subscribe to Delilah’s newsletter at
newsletter
.

About
The Pleasure in Surrender

Excerpt from
Rules of Engagement

T
he first missive
arrived without fanfare, passed through the iron bars of the barbican by a lone messenger dressed entirely in black.

Sir Geade read the note, lifted a graying brow, and then passed the small scroll to Lady Edwina, who held it beneath the oak table to read it. Not that everyone wasn’t aware of the queer fact that she could read.

Prepare for a wedding or a siege.

With all gazes resting on her, Edwina schooled her expression into a neutral mask. “Should I thank him for the warning, Geade?”

Sir Geade snorted. “He gives us time to retreat to the keep, stock the larders, and call our neighbors for assistance. Perhaps we should.”

“What sort of warrior would give away his plan?” she murmured, not the least bit alarmed.
Not yet.

“Either a fool or one who’s supremely confident.”

She traced the bold scrawl scratched across the parchment with her fingertip, knowing instinctively the bold knight had written the message himself. No proud scribe would pen a note so spare.

Grimvarr
had been written across the bottom—as if she should already know his name and the two syllables should strike fear. “An odd name for a Norman knight.”

As she swept from the hall, she would never have admitted that the word
wedding
had caused her more alarm than
siege.

In response to the warning, Edwina ordered the stores replenished and the flocks of sheep brought closer to the keep, but otherwise went about her business without worry.

Who was this baseborn knight with designs on her demesne? Her overlord had assured her the choice of husband from among the eligible men in the region—once her grief was passed. That Edwina had every intention of nursing her
grief
for as many years as she could was a secret she kept to herself.

But by the time the second missive arrived, she’d learned a thing or two about the mysterious Grimvarr. Lord Alred’s steward had been a font of gossip concerning the knight who’d earned the Duke of Normandy’s trust by barreling into the royal pretender to save him from an assassin’s arrow. That act had earned him the gift of her demesne. A fact she found humiliating to learn in such a manner, but since her overlord had yet to apprise her directly of the news, she preferred to assume it was only rumor. How could the pretender give a gently bred woman to a barbarian?

Grimvarr was a Viking
—or at least half the demon race, his father having abducted a Norman maiden and returned her promptly to her father when she’d spoiled his enjoyment by getting with child. And although he’d been raised by a Norman peer, he chose to dress in the fur and skins of his barbarian father.

No doubt Alred’s man had embellished the tale to cause Edwina worry. His master would love to see her squirm after she’d refused his latest suggested mate, claiming she’d marry the pig keeper before she’d wed a man who’d already sent two wives to the grave in childbirth.

While she kept her chin high and her comments derisive of her new “suitor” whenever he was mentioned in company, she’d suffered nightmares over the days before the second note arrived.

This message was longer.

I bring 25 knights, a hundred bowmen, swords and shield to arm every man, and one siege machine. Yield to me or face consequences.

“’Tis a love letter,” she muttered, determined to keep the bastard knight’s looming menace from raising alarm among her people. “He intends to impress me. No different than any of the other preening knights who’ve tried to woo me.”

“Perhaps he simply gives you fair warning, milady.” At her reproving glance, Sir Geade shrugged. “Our requests for reinforcements from Alred and Rathburn have gone unanswered.”

“They know he approaches. Perhaps they fear him.”

“He bluffs!” she said with a dismissive wave of her hand. “What landless bastard commands such a force?”

He sighed. “Perhaps you are right. However, I would sleep easier if you remained inside the walls—at least for the coming weeks,” he amended when she gave him a scowl.

It rankled that her freedoms were curtailed by an upstart. Still, it was worrisome no one had answered her calls for assistance. Was he truly so imposing?

Her answer came one morning when the mists melted away to reveal glints of the armor and weapons of the force that spread across the meadow below the castle’s dirt moat. Guards had alerted Sir Geade, who’d awoken her before dawn to tell her they had visitors.

As she strode the length of the curtain wall peering down at the small army, she felt her first real frisson of unease. It seemed the knight hadn’t been bluffing after all.

Another note was passed. She held out her hand for the message, broke the seal, and unrolled the parchment. After a quick glance, she ripped the message to bits, tossing it over the castle walls. She hoped
Lord Grim’s
eyesight was good, because she didn’t want her response to his demand that she open the gates missed.

Indeed, a horse burst from the line of mounted knights and rushed forward to a spot well beyond her archers’ aim, where he reined in his horse and stared up at the curtain wall. The man astride the huge black warhorse fixed her with a glare she couldn’t miss despite the distance, and she shivered. Was it him? Good Lord, he was large, freakishly so, with shoulders made to appear even more broad by the black bear sash he wore over his armor. His arms were bared except for a wide golden band surrounding one thick bicep. His thighs were like tree trunks as he straddled his great warhorse. There was little she could tell about his face other than the strong jut of his chin and sinfully dark gaze hidden behind the nosepiece of his conical Viking helm. Long dark hair waved from beneath his helmet.

As she gaze down, an unexpected thrill pulsed through her. Completely unwanted. Irresistibly mystifying. Why after all the suitors she’d ousted from her keep, did this one make her breath hitch? Edwina drew a deep breath and slowly shook her head. It was only the thrill of the challenge he presented. She lifted her chin and turned her back.

Geade groaned beside her. “You’d add insult to your refusal?”

“He bluffs,” she said with a wave of her hand even though she felt the giant’s wicked gaze burning on her back. “We have the advantage. My mother withstood my father for months. The walls are strong, our stores of foodstuffs and weapons replete—thanks to his warnings. We have only to outwait him.”

Geade’s gaze went to the meadow; his gray brows furrowed with doubt. “I don’t think this knight will wage a gentleman’s campaign to win your heart, milady.”

Edwina rolled her eyes. Her mother’s siege had been a woman’s ploy to force a husband she wanted to accede to her demands. And she’d won. She didn’t need the old grizzled knight who’d witnessed her mother’s strategy to remind her this time was far different.

Still, a siege was a siege regardless of the motives of either side. “We will not open the gates to this barbarian. Our neighbors will learn of this outrage, and they will come to our rescue. That or Lord Alred will put a stop to the Viking’s campaign. I have his promise of protection.”

Geade’s breath whistled between his pursed lips. “I think not, milady.”

At the jerk of his chin, she turned to gaze beyond the line of the Viking’s contingent. Alred’s banners waved behind them.

“He supports his suit?” she said, feeling faint.

Geade snorted. “He’s likely come to enjoy the battle. The tale of your lady mother’s victory provided entertainment for years.”

Edwina pressed her lips together, not liking the faint humor dancing in Geade’s eyes. “I’m not my mother, and I’m not withholding my hand to ensure that I keep my wealth separate from my husband’s. I’ll not take a husband I don’t want.”

“Are you sure this is the battle you wish to fight, milady?”

Geade was her best friend, but she’d ignored his imploring that she find a husband to rule with her. She’d been blessed the first time with Malcolm. A man who’d left the running of the castle, the overseeing of the harvests, the tallying of the tithes to her while he’d drunk himself to death.

His excesses had nearly beggared them, and yet she’d managed to hide the extent of their wealth, and had hidden away enough to see them through hard times after his untimely death. Enough to allow her to pay a widow’s pension to Lord Alred to ensure her period of mourning was respected. The fact she’d just made her annual payment galled, seeing his forces aligned behind the Viking’s.

Edwina didn’t flinch from the sight. Men betrayed women all the time. With a final internal reminder that she was indeed her mother’s daughter, she shook back her hair. “Send the bastard our response.”

Geade’s lips firmed. She knew he wanted to say more, but he also knew when to keep silent. His cheeks billowed around an exasperated breath, but he nodded, raised an arm, and dropped it. The arm of the catapult parked in the middle of the bailey snapped upward, and the contents held in the scooped arms sailed high over the walls.

Her own men ducked, faces screwing into ferocious grimaces, but once the contents cleared the wall, they all turned toward the army at the bottom of the hill.

Shouts rang up and down the line, and arms rose to shield eyes as they stared upward. Edwina smirked as the foul contents of the castle’s jakes rained down on the Viking’s men. “Let the game begin.”