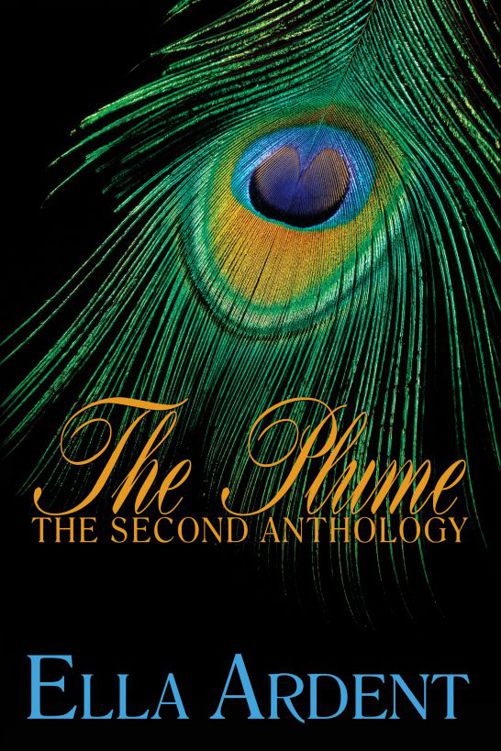 The Plume:
The Second Anthology

in The Plume Series:

Without limiting the rights under copyright
preserved above, no part of this book may be reproduced, stored in
or introduced into a retrieval system, or transmitted, in any form,
or by any means, (electronic, mechanical, photocopying, recording,
or otherwise), without the prior written permission of both the
copyright holder and the publisher of this book.

This is a work of fiction. Names, characters,
places, and incidents either are the product of the author’s
imagination or are used fictitiously, and any resemblance to actual
persons, living or dead, business establishments, events, or
locales is entirely coincidental.

The scanning, uploading, and distribution of
this book via the Internet or via any other means without the
permission of the publisher is illegal and punishable by law.
Please purchase only authorized electronic editions, and do not
participate in or encourage electronic piracy of copyrighted
materials. Your support of the author’s rights is appreciated.

It didn’t take Rex twelve days to tire of his
Christmas present.

It wasn’t that the sexy elf left bound in red
ribbon beneath his tree wasn’t responsive. It wasn’t that she
wasn’t attractive. She was cute and impish, just like an elf, and
while Rex preferred lush breasts, there was something to be said
for novelty.

What Rex quickly realized was that she was
amenable to anything he tried.

And that stole much of the pleasure of
mastering her.

Rex liked to discover the secrets of his
slaves. He liked to find their psychological barriers. He liked to
surprise them and push them a little farther than they might have
gone by choice. He liked to astonish innocents with forbidden
pleasure. He loved the little moan of mingled surprise and ecstasy
– like the one Joanna characteristically made. He liked to make
secret dreams come true.

By the second morning with his agreeable and
enthusiastic blonde elf, Rex was certain she had no secret desires
or dreams. She lived full out, chasing every idea as soon as she
had it and making the most of whatever came her way. While such an
appetite was admirable, it didn’t excite Rex.

It was time for her to leave his
apartment.

He’d left her bound and blindfolded on the
couch for the night. He hadn’t wanted her in his bedroom, hadn’t
wanted to encourage a false intimacy, not once he’d realized that
this interval would was doomed to end quickly. He checked on her in
the morning and found her still sleeping.

He went to shower while he considered the
question of how to evict her from his apartment. Should he take her
back to the Plume? She’d evidently come from there, since she had
been wearing the elf uniform made for the waitresses in the Plume’s
bar this holiday season.

Funny Rex didn’t remember her. He stood under
the stream of hot water and wondered at that. But then, the Plume
had a large membership and each year, it became harder to remember
every individual member. Still, it was a point of pride for him to
know them all, and he felt as if he had slipped up. He should spend
some more time with the files this week.

Maybe he should access the elf’s file at the
Plume, find out where she lived and take her home. Her departure
was complicated by the fact that the only clothing she had was the
costume, which had been designed to reveal a woman’s assets. She
couldn’t exactly take the bus home, not dressed like that.

Rex came out of the bathroom, a towel knotted
around his waist, only to discover that his bound slave was gone
from the couch.

She was sitting naked at his desk, clicking
through images on his laptop.

Rex stifled his anger with an effort, telling
himself that her mistake could be innocent.

But he doubted it.

“What the hell do you think you’re doing?” he
asked. His quiet tone, a hint that he was maintaining control with
an effort, would have sent every soul at the Plume running for
cover.

This woman smiled at him, untroubled. “I
wriggled free. The bonds weren’t very tight last night.”

“I didn’t want to cut off your
circulation.”

“I know. But I was tired of being on the
couch.” Apparently oblivious to his anger, she clicked through the
images at a rapid pace. “Are these yours?”

“You already know they are.”

“They’re great shots. You have a fantastic
eye for composition. And the color. Wow.”

Even though Rex took great pride in his
photography, even though he was always interested in hearing good
comments, her opinion didn’t improve his mood. “You shouldn’t be
looking at them.” He strode across the room, shut off the laptop
and closed the lid.

“I was just curious,” she said, smiling up at
him. “You should have a show. I know a gallery that would be
thrilled to exhibit your work.” She nodded, obviously thinking. “We
have that in common, you know, being artists. But you’re really
gifted. I’d like to help you make this work. In fact, we could work
together. Your photographs and my sculpture.” She spun in his
chair, frowning slightly. “Josh would eat it up. That’s the gallery
owner. And he’s said a bunch of times how he’d like to know more
about the Plume. With everyone so curious, the show would be a huge
hit...”

Rex braced his hands on the arms of the chair
she occupied and leaned over her. “No.” He spoke with finality,
hoping to silence her. “I’m not interested.”

“Well, why not? You could make a fortune.”
She looked longingly at the laptop. “They’re so good. It would be
fabulous publicity, both for you and the Plume.”

“Well, there is that.” She cast him an impish
smile. “Come on! You can’t take pictures like this without wanting
to have someone see them.”

The truth was that there was nothing Rex
would have liked better than to have an exhibit of his work, but it
couldn’t be these photographs. Showing these in public would betray
the trust of the members of the Plume, and undermine their
confidence in his integrity. Rex would never risk that.

“Leave it!” Rex’s voice rose and the elf
seemed to finally notice his annoyance. She fell silent and eyed
him, a glimmer of uncertainty in her eyes. Rex gave her a hard
look. “I thought you were the submissive.”

She sighed, blowing out her lips like a
child. “If you say so.” She grinned again. “Master.” She tilted her
head to regard him. “You never even asked my name, you know.”

“I figured I could look it up.”

If she didn’t know about the Plume’s
databases, Rex wasn’t going to tell her. He turned to stride toward
his bedroom and get dressed.

“What’s the plan today?” He glanced back to
find her spinning on his chair, her expression mischievous. She was
persistent, he’d give her that. Rex returned to get his laptop,
taking it into his bedroom with him.

“There is no plan,” he said flatly. “You’re
going back to the Plume.” Rex hauled on a pair of jeans and grabbed
a dark t-shirt.

She laughed again. “I can’t go back to
somewhere I’ve never been.”

Rex paused on the threshold of his room,
staring at her. “What do you mean?”

She smiled again, pulling up her knees and
hugging them to her chest. Her glistening sex was visible to him,
but Rex felt only a weight in his gut. “I’ve never been there. I’d
like to go, though. Is that where we’re going today?”

Rex spoke with care. “But you were wearing
one of the costumes from the Plume.”

“Was I? Mike brought it for me and told me to
put it on. I thought it was kind of cute.”

Rex’s anger began to boil. “Let me get this
straight. You’ve never been to the Plume?”

She shook her head. “But let’s go. I’d love
to see it.” She pointed after the laptop. “Some of these pictures
must have been taken there. The decor looks great...”

She’d never been to the Plume.

Which meant she’d never signed a contract.
She’d never seen the waivers and she’d never given permission to be
enslaved. Rex felt sick. And now she’d been captive in his
apartment for a day and a half, being used as his sex slave.

At least she didn’t know where the Plume
was.

He marched across his living room, grabbing a
coil of rope as he went. The elf squeaked when he grabbed her, but
he bound her arms to her sides quickly. Even that didn’t shock
her.

She smiled up at him. “Hey, playing rougher
today. I like it.”

Rex scooped her up and knotted the rope
around her ankles. He threw her on the couch, disgusted with the
trick that had been played on him, then got a towel from the
bathroom.

“How am I going to go to the Plume?” she
managed to ask before he shoved the cloth into her mouth. He
knotted the rope around her head, securing the gag more tightly
than was strictly necessary. Then he wound the rope around her over
and over again, ensuring that there was no chance that she could
escape. She wriggled, as if enjoying herself, and Rex could smell
her sex getting wetter. Her eyes were shining with
anticipation.

He grabbed a duffle bag from his closet and
folded her into it, hauling the zipper closed with force.

Then he shrugged into his leather jacket,
grabbed his keys and took the bag to the parking garage. He
squealed the tires of his Jeep as he backed out of his spot, more
furious than he’d been in a long time.

Rex had a few minutes of driving to decide
whether he would kill Mike or not. His former friend had put the
security of everyone at the Plume at risk, and Rex didn’t find it
amusing at all.

Mike was convinced that Joanna was
perfect.

He’d bought her a new outfit for Christmas
and had laced her into the white satin corset first thing this
morning. It was even tighter than the black leather one, and made
her waist much smaller than before. He liked how prominent the
laces looked on the back of it, and the way the lace edging on the
front frothed beneath her breasts.

He’d bought white lace stockings to go with
it, and white ankle boots of soft kid leather with high heels. The
garters stretched over her butt when she was dressed, making her
skin look too pale in comparison to the white. She was unsteady on
her feet, the high heels affecting her balance. Mike liked when she
seemed vulnerable and delicate like this, and loved the sense of
power that came from knowing he could overwhelm her easily without
notice.

She’d obediently tied the sheer white apron
around her waist, the frills at its hem just covering her pubis in
front. The bow at the back drew attention to her narrow waist and
left her butt bare. She’d coiled up her dark hair at his command,
put red lipstick on her mouth and nipples, and tied a length of
white satin ribbon around her neck. She tugged on the white lace
gloves and turned before him for approval.

She looked so sweet and delicious that he
couldn’t catch his breath.

When she smiled at him, her smile secretive
and warm, he got even harder. “You like this,” she said, pride in
her voice.