Read The Principles Of Lust Online

The Principles Of Lust 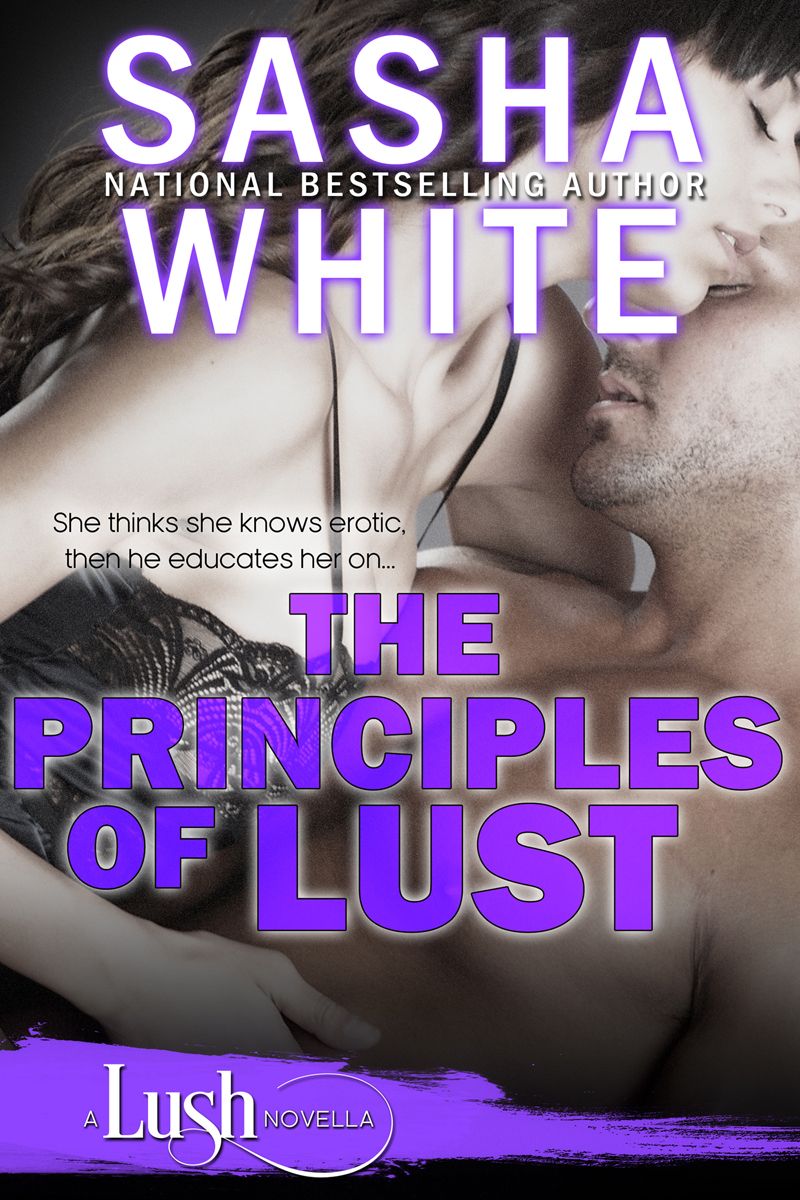 This story is a work of fiction. All names, characters, locations, and incidents are products of the authors’ imagination, or have been used fictitiously. Any resemblance to actual persons living or dead, locales, or events is entirely coincidental

This ebook is licensed for your personal enjoyment only. This ebook may not be re-sold or given away to other people. If you would like to share this book with another person, please purchase an additional copy for each person. Thank you for respecting the hard work of this author.

“Will have readers panting for more.”
– Fallen Angel Reviews

“The heat is on…and it never cools down.”
- Midwest Book Reviews

“Creates a carnal haze that envelopes the readers, caresses their sense…deliciously decadent.”
-

“White does a fabulous job of keeping the balance between an interesting plot and uninhibited sexual activity.”
—Fresh Fiction

“Sexy, raw, and intriguing.”
—The Road to Romance

Step into
Lush
, the decadent art gallery that specializes in the sensual, and let your desires set your heart free.

Businesswoman Teal Jamison knows what she wants and isn’t afraid to go after it. With her dream art gallery about to open, she’s in need of some serious stress relief and virile carpenter Zack Dillon is just the man to give it to her.

Only Zack doesn’t think they’re a good match. He likes to be in control, always, and Teal’s anything but submissive when she comes on to him. When Teal refuses to give up the chase and the two come together in a explosion of heat, but will the flames of their desire burn them, or forge an unbreakable bond?

At first glance it was rude. Yet, the longer Teal looked at it, the more details she noticed … and the faster her pulse raced. The photograph shifted from rude to … raw, as she looked past the shadowed anus and the pouting pussy lips.

It was in that moment that the idea came to her. She’d been feeling a little lost and alone, like she didn’t have a purpose. Her parents were happy in their corner of the world, and her brother had found a career he seemed to thrive in. Yet for her, jobs came and went, men came and went. Nothing seemed to challenge her anymore.

She knew there was more to life than partying and she wanted to have goals, she knew she could do anything if she put her mind to it. She’d just never had a clue what she’d wanted to do before. Other than be successful, be independent. But right then, when she looked at that photograph, a lightening bolt struck and she knew.

She could use her ambition and drive, her salacious mind and her ability to think outside the box, and finally carve her own special niche in the world. A successful and unique place that would be all hers.

And it would be called… Lush.

With less than a week until Lush’s opening day, Teal Jamison didn’t have time to time to fuck around. Especially with something as frustrating as some punk kids spray painting nasty messages on the front of her building. Pissed off and stressed out about all the piddly little things that kept screwing up her plans, she strode into her soon-to-be art gallery muttering to herself only to stop dead in her tracks.

Anger turned to desire and excitement of a different sort flowed through her at the sight that greeted her. Soft faded denim stretched lovingly across perfect tight male glutes.

All thoughts of temperamental artists, inconsistent suppliers, and juvenile delinquents evaporated as she watched the man straighten from his bent over position and enjoyed the sight of a worn leather tool belt framing his ass perfectly.

“Looking’ good, Zach,” Teal purred as she dropped her backpack on the reception desk and continued in his direction. An hour or two of uncomplicated no strings naked wrestling with him would certainly take the edge off her stress level.

The carpenter ran a loving hand over the custom built mahogany shelf he’d just installed before turning to her. “Thanks, Teal, but I’m just helping bring your vision of the place together.”

“Oh, I’ve no doubt the gallery will be beautiful, but I was referring to the view when I walked in.” She winked at him and gave his impressive form an obvious once over.

His eye’s flared brightly at her brazen comment before they closed in a slow, lazy blink that made her knees weak. When he looked at her again, the heat was banked and his smile was unhurried. “Well, that’s the point of the set up right? That the view be good from every angle?”

Zachary Dillon had come highly recommended as the finish carpenter for her new art gallery and she’d made it a point to be completely professional with him. But his work for her was almost done, and she was ready to be more than his boss.

Her eyes followed his movements as he pulled a cloth from his tool-belt and wiped his hands. His rough, calloused, manly hands were large enough to hold her C-cup breasts and make her feel small. Her nipples pebbled in response to her thoughts and she lifted her gaze to his.

“I was talking about you, Darlin’.” She couldn’t help it. Flirting had always been second nature to her, man or woman, it didn’t matter, she flirted and charmed … and usually got whatever she wanted.

From the start, just being around Zach had made her blood heat and her pulse race, but she’d remained professional. Teal prided herself on always being a professional, no matter what job she was doing, but she was working for herself this time. Lush was her place. Her baby. And she didn’t want anything getting in the way of Lush’s success, especially her own libido.

Waiting until his work for her was completely done would be the smartest thing to do, but she’d had a shit day and her emotions were running high. Maybe letting herself go this once would be a good thing. One night of steamy love’n and her hormones would calm down, and she could concentrate on work again.

Yes, that was exactly what she needed.

She touched his bare arm lightly and gave him the slow sultry smile that always got her whatever, and whoever, she wanted. “You’re looking good.”

“Thank you.” His voice was a bit deeper as he shifted his weight to his other foot, taking him just out of reach. A knowing smile lifted his lips as he reached for the sweatshirt lying on a nearby stool, and pulled it on over his ragged t-shirt.

“I can’t do anything else until I pick up more varnish, so I’m done for the day. I’ll see you bright and early Monday, Teal.” He picked up an old wooden toolbox and waved to her with his other hand. “Have a good night.”

Teal said goodnight and watched him saunter away.

What the hell had just happened? She’d come on to him, in fact, she couldn’t have been more obvious if she’d stripped off her clothes and said, “Let’s wrestle naked.” And he’d walked away!

Men never walked away from her.

So why would a big, healthy and attractive man walk away from a woman he desired?

A few of hours later she was working in the back room, and the question was still on her mind.

“Maybe he’s just shy.” The perky brunette said from her perch on top of a packing crate.

“No, that’s not it.” Teal shook her head and pulled the lid off the smaller crate on the table in front of her. She thought about the way Zach moved, the way he ran his hands over whatever he was working on, and a shiver danced down her spine. “He’s way too … confident to be shy. He’s quiet for sure, but he gives off this impression of restrained strength. Very strong and sexy, and completely alpha.”

It was just after ten p.m. on Saturday night and she and Brina Jo were in the spacious back room of the gallery, unpacking the first shipment of items. Teal had spent the last two hours on the phone trying to line up a cleaning crew to come and wash the graffiti off her building, but since the next day was Sunday, nobody wanted the job. She’d lined up a crew for Monday, though.

She’d been enjoying her time alone in the back room. The first bit of quiet time she’d had in a while.

Unpacking inventory in the back room was a bit of both for her. She got to work fast and efficiently, and since she was alone, she could turn off her brain for a while and just enjoy. But her brain hadn’t co-operated. Instead, she couldn’t stop thinking about a certain well-built carpenter, and fantasizing about ways to get him naked.

Until she’d heard someone rattling the locked door of the gallery.

Thinking she might catch the graffiti punks, she’d dashed through the empty gallery only to open the door and find nobody. Well, nobody with a spray can anyway. What she had found was a flyer with the words “House of Sin. You are going to hell” on it, glued to her front door. Slightly creeped-out, and tired of her own thoughts, she’d called her long time friend and newly hired assistant, Brina Jo.

By the time Brina arrived at the gallery, Teal had scraped the flyer off the door with warm water and a putty knife, and pushed it to the back of her mind. However, thoughts of Zach would not go away so she’d blabbed uncontrollably to Brina about the brick wall hitting on him had been.

Step Brother by Jayna King
The Bad Boys of Summer by Valentine, Sienna
Murder at the Castle by Jeanne M. Dams
The Sea Came in at Midnight by Erickson, Steve
The Reluctant Communist by Charles Robert Jenkins, Jim Frederick
The Sex Whisperer: Book 1 in the Whisperer Trilogy by Rabbit, Sadie
Salvage the Bones by Jesmyn Ward
Driving on the Rim by Thomas McGuane
Public Affair, Secretly Expecting by Heidi Rice
Eleven by Patricia Reilly Giff