Read The Purest of the Breed (The Community) Online

The Purest of the Breed (The Community) 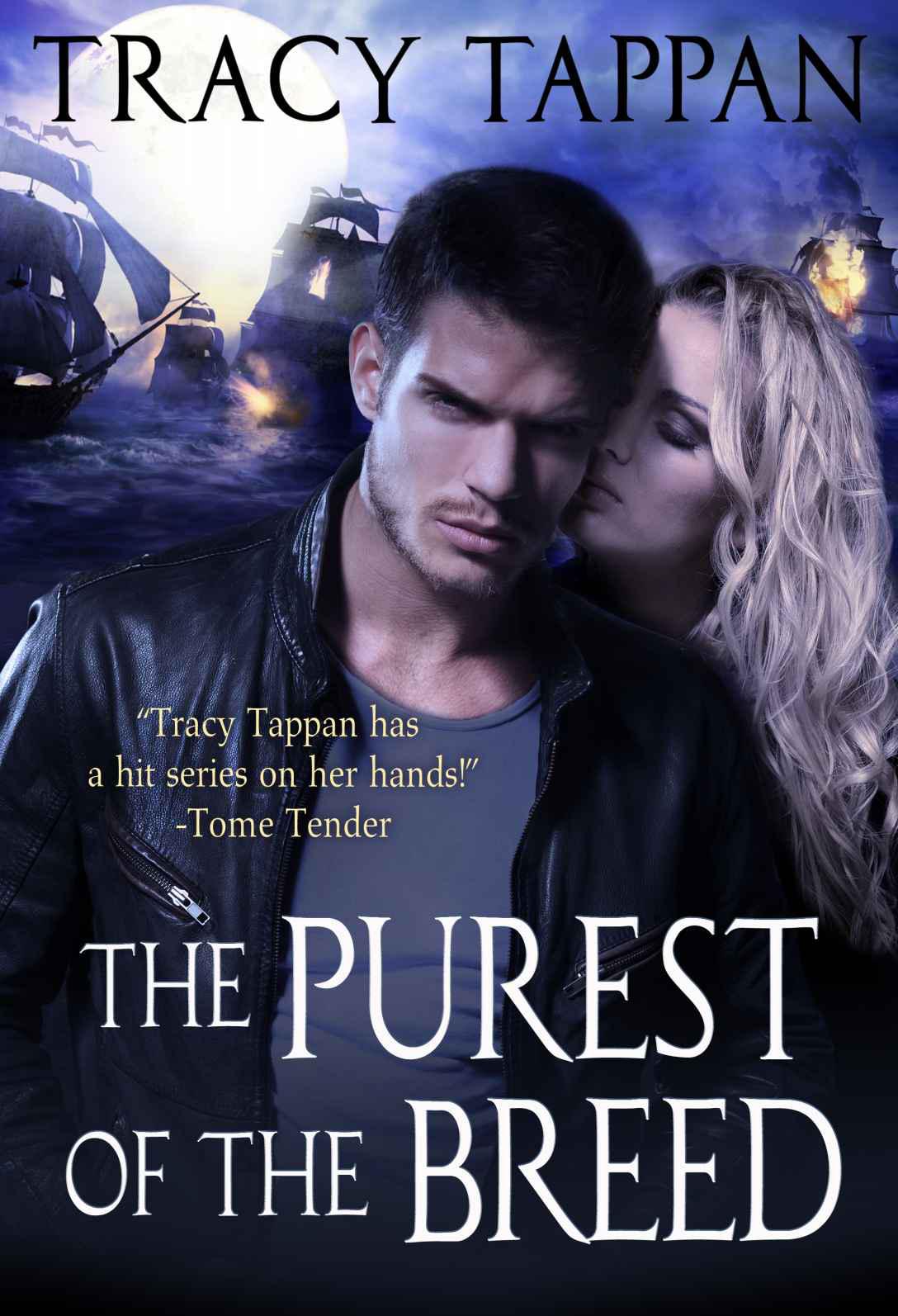 THE PUREST OF THE BREED

The Purest of the Breed

Book Two in The Community Series

Plagued by enemies from above and below ground, a group of Vârcolac warriors fight a desperate battle to keep their secret town safe from invasion

A different place to find her dreams
…

The night Marissa Bonaventure is saved from vicious kidnappers by special operative, Dev Nichita, her life is changed in ways she never could have imagined. Brought to the safety of an underground “research institute,” she’s offered a hefty sum of money to stay and work for a year, money that will allow her to fulfill her lifelong dream of owning a restaurant. But the surreal events that unfold in the strange community of Ţărână soon make her wonder if all is what it seems. When the shocking truth about Dev is exposed, Marissa faces an impossible decision. She loves Dev deeply, but committing to a Vârcolac is a forever proposition, and the only way she can be with Dev will require her to throw away her one chance to redeem a miserable past.

The man he wants to be
…

The night Dev Nichita rescues Marissa from the claws of the Om Rău demon race, he knows she’s meant to be his mate. Lying to her about his true nature feels wrong, but he needs time to make her fall in love with him before he reveals that he’s a different breed of human being. When that secret finally comes out, their relationship is shattered in ways Dev hadn’t predicted. A 100-year-old betrayal rises up to threaten their future together—devastating every member of his family—and Dev’s own angry withdrawal becomes a nearly insurmountable obstacle. Then the Topside Om Rău enemy threatens a catastrophic breach of the hidden community, and Dev must call upon all his power as he races against the clock to save the most important people in his life.

The Purest of the Breed

Without limiting the rights under copyright preserved above, no part of this book may be reproduced, stored in or introduced into a retrieval system, or transmitted, in any form, or by any means, (electronic, mechanical, photocopying, recording, or otherwise), without the prior written permission of both the copyright holder and the publisher of this book.

Book One in The Community Series

“I can say with no hesitation and no qualms whatsoever that The Bloodline War is the BEST book I have read this year to date… I couldn’t give this book a simple rating. I had to give it infinite gold stars. It was just that wonderful.”

“The book starts out strong and just keeps going with the action and suspense! Throw in the need to fan yourself from the smexy scenes, the need to keep it down when you have to laugh out loud, and the “awwwww” factor of the sweet & lovey scenes…and this will move quickly to the top of your Favorites list!”

“A great blend of paranormal horror, action/adventure, humor, sweet romance, and a fair bit of spice and sexual tension. Even if you think vampires are overdone, don’t be frightened away—because this is a thrilling vampire love story like you’ve never read before.”

“Tracy Tappan has a hit series on her hands that is full of action, great characters, snark and attitude while her crisp writing style has built an underground world that almost breathes, it feel so real! Her ability to dole out nuggets of information is brilliantly paced.”

“Jaċken is one of my all-time favorite heroes. He is so dark and tortured, and yet it’s clear that he has so much good in him that just needs a way to come to the surface. I would absolutely keep reading this series.”

“As the story took off, I was hooked. I had to find out what happened next. If you enjoy Paranormal Romantic Suspense, I’d definitely check out The Bloodline War.”

“This book was a total hoot and a half with dashes of sexy, adventure, and humor mixed in. Toni, the main character, and her heartthrob of a crazy half-breed, Jaċken, was an awesome pair.”

A Little Bit of R&R

I have to thank an absolutely amazing team for helping me get my vision onto the page; without even one of them, this job would be impossible. Jessa Slade and Faith Freewoman, are two utterly brilliant editors, Cristine Carpenter, my copy editor, who has an incredible eye for detail, my cover designer, Laura Morrigan, who takes my ideas and always moves beyond my wildest dreams with them, Amy Atwell, my fearless formatter (I know all of those strange symbols are a killer!), and Rae Monet my website designer, whose creativity and efficiency are unsurpassed.

Thanks also to Nena and Gary Demack for help with some of the German phrases in this book (all mistakes are my own).

My deepest love and gratitude goes out to my husband and two children. Without the daily joy they give me, I wouldn’t have the capacity to imagine.

Who taught me a love of reading.

This book wouldn’t be here without that.

The symbols that appear above some of the characters’ names don’t affect pronunciation. They are used only to indicate breed (Om Rău, Half-Rău, Fey, or Fey-Rău). This will make sense to you as you enter the story world.

Om Rău also operates like the word moose—the same form for both singular and plural.

Marissa Bonaventure sat bolt upright in bed. Wood cracked and splintered, a door banged, furniture scraped. She gulped for air, her heart galloping in her chest. A hovering silence followed. She waited, the thundering of her heart trying to outrun her fast breathing, but there was only silence. Okay,
Jesus
… She squeezed her lids tight then peeled them open again. Only a nightmare. She blinked groggily at the dim numbers on her digital clock—2:36 a.m.—her mind slowly registering that she’d only been asleep for about an hour. She’d worked late cooking at
Bleu Boheme
restaurant tonight, some lactose intolerant asshole endlessly chewing her ear off about all of the cheese on the menu.
Well, yes, sir, this is a
French
restaurant, after all, and generally—

A gruff voice growled a command, and then her roommate, Lila, started screaming.
Holy frick
! Not a nightmare.

There were men in her apartment!

Coming fully awake on a searing blast of adrenaline, Marissa vaulted for the cordless phone on her nightstand. Her wildly groping fingers knocked the receiver out of its holder and sent it skidding across the thin synthetic carpet. “Oh, God, crap.” She threw herself after the phone, and crashed off her mattress, the sheets tangled around her legs. Air drove from her lungs. “Crap,” she gasped again. “
Crap
.” Darts of pain shot through her elbow.

The report of heavy boots in the hallway vibrated through the floor beneath her, the footsteps thundering toward her bedroom. Panic shot through her stomach and clawed up her spine. She stretched one arm toward the phone by her hamper, scooting her body across the floor like an epileptic caterpillar trapped in its cocoon.

She jerked to a sitting position, her heart lurching to a dead halt. A broad-shouldered shadow loomed into her doorway, the light from her digital clock offering only a vague impression of dark, baggy clothing, the cut of a hard jaw…and the most sinister eyes she’d ever seen in her life. A scream launched up her throat but stuck there, unable to make it past the strangulation of terror gripping her larynx.

“In here!” the intruder shouted down the hall, his head turning to reveal what looked like stripes of gangrene on his jaw. No…a black flame tattoo.

Another man entered, and her mouth sagged. And she thought Gangrene Face’s shoulders had been broad. The man who’d just shoved into her room was twice as big, his shoulders size Incredible Hulk, and a hundred times scarier. She saw him clearly as the lights from a Navy helicopter on its weary way home to NAS North Island raked through her organza curtains like a prison searchlight. A body clothed in a black leather jacket and dark cargo pants was revealed, along with the man’s shaved head, sporting tattoos—same black flames as Gangrene—climbing from above his ears to the top of his bald head. He looked like an Aryan Nation sociopath, brutal and violent and…what could he possibly want with her?

He stalked toward her, and her stomach iced. She scuttled sideways against the wall like a crab, her teeth set in a grimace, her eyes darting toward her bedroom window. Only a few feet away, but…five floors down equaled lots of bone breakage on the streets of San Diego.

“She must be the bit o’ skirt we’re lookin’ for,” Gangrene told Hulk in a British accent which
really
didn’t fit this scenario.

Hulk drew up right in front of her, six-feet-umpteen-inches of darkness, chilling, ruthless power emanating from him.

She kicked violently at the jail of her sheets and found a scream, finally, belting it out as loud as she could.

Like a genie being commanded into its bottle, her voice obeyed immediately and rammed back down her throat.
Yes, yes, upsetting a man like this is an extremely bad idea
.

He reached for her.

She pressed backward so hard, she wondered the drywall didn’t crack against her spine.

Grabbing her shoulders, Hulk jerked her out of the wrap of her sheets and onto her feet, the violence of the gesture jolting a cry past her lips. With a bruising grip still on her upper arm, Hulk hauled her at a stumbling pace from her bedroom into the hallway.

“Please,” she gasped, hot tears spilling down her face. “What do you want from me?”

They passed her roommate’s bedroom, and Marissa glimpsed Lila peeking out from behind the door, a bed sheet wrapped toga-style around her body. Not such a good night to get caught sleeping in the nude.

Her roommate’s
you’re doomed
tone turned Marissa’s legs to pudding, just,
squish
, down she went onto her knees.

Hulk made a guttural sound of impatience and yanked her to her feet again.

“P-please,” she stammered. “D-Don’t hurt me, please.” She pulled against his hold, but it was like trying to stop a Kodiak bear. Her feet skidded along the length of the hallway, carpet burning the soles of her feet.

“Fuckin’ cow,” Hulk snarled. So much for not upsetting the man. He tossed her over his shoulder, the chains on his biker jacket biting into her skin through the thin fabric of her pajamas. The rounded position of her back pulled painfully at her spine, and she choked on her next breath. The fragility of her body, something she usually so successfully ignored, roared dead-center into her consciousness. Panic greyed the sides of her vision at the feel of hard, solid muscles beneath her. This man was massive. He could do anything to her,
anything
, and she’d be utterly helpless to stop him.

The Midnight Mayor by Kate Griffin
Elemental Earth (Paranormal Public) by Edwards, Maddy
Songbird (Songbird, #1) by Lisa Edward
Through a Window by Jane Goodall
Wild Is My Heart by Mason, Connie
Chains of a Dark Goddess by David Alastair Hayden
Darker by Trina M. Lee
Red Hot Letters to My Husband by Stair, Kendra
Almost a Woman : A Memoir (9780306821110) by Santiago, Esmeralda
Taking the Stage: Soulgirls, Book 2 by Heather Long