Read The Queen B* Strikes Back Online

The Queen B* Strikes Back 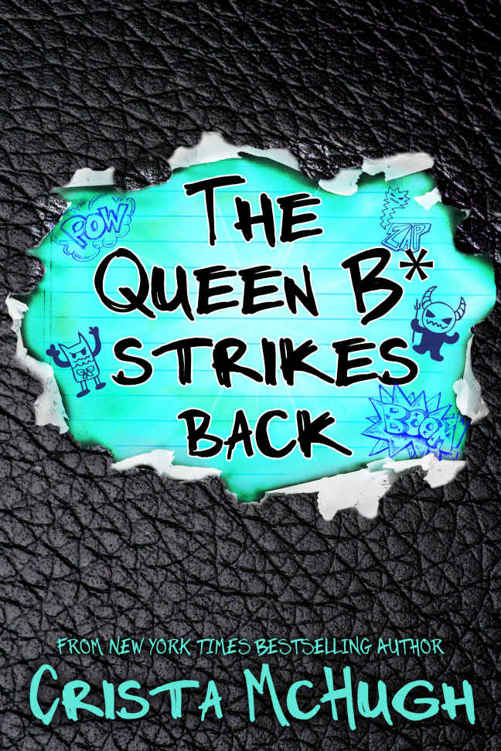 Want to know what happens next?

The Queen B* Strikes Back

There’s a special place in hell reserved for those who wake me up before noon on a Saturday.

I’d forgotten that he was on my preferred contact list, so his call came through the Do Not Disturb feature on my phone. Two weeks of a school project with him and now he was ruining my first day without Junior, the mechanical mutant baby that had been the bane of my existence.

The phone wouldn’t stop ringing, so I was forced to pick it up. “Give me one reason not to make you the topic of my next blog post.”

After all, I was Alexis Wyndham, the Queen Bitch of Eastline High School. My blog,
The Eastline Spy
, was notorious for taking members of the in-crowd down a peg, and as the hottest guy in school, Brett would be an easy target.

Too bad he’d somehow earned a soft spot in my heart. It was not something my cruel, hard image as the Queen B* would allow, and even though I’d convinced him we were better off as friends, I’d started second-guessing my decision the moment he walked away.

“I was calling to make sure you were ready to go to the senior class carwash. I’ll swing by your house in ten minutes to pick you up.”

Before I could protest, he hung up.

I glanced at my alarm clock.

A) Where does Brett get off thinking that I want to have anything to do with the idiots I refer to as “classmates”?

B) Why in hell would he think I’d want to go to this event, let alone with him?

But the butterflies in my stomach overruled my brain. As much as I loathed the idea of getting wet all in the name of raising money for a stupid class gift, the idea of Brett picking me up was enough to make me crawl out of bed.

Besides, if I arrived with him, it would piss off my nemesis, Summer Hoyt, to no end. She wanted him, but he wasn’t interested. In fact, he seemed more interested in me. At least, if I believed yesterday’s conversation behind the scoreboard.

Brett wanted to be more than friends, but I wasn’t ready to go there.

At least, not yet.

I’d spent three years building a rep as the hardest bitch in school, and if the star quarterback started dating the Queen B*, then both of our positions in the high school social hierarchy would suffer.

But if we weren’t at Eastline…

My thoughts wandered to a few days ago, when we’d hidden in a janitor’s closet to keep Principal Lee from catching us in the girls’ locker room together. Brett had taken the opportunity to kiss me, and before I knew what was happening, I’d lost my shirt. At least now I understood how my best friend, Morgan, could lose her head over so many guys and end up naked in bed with them. Teenage hormones were powerful things, especially when you factor in a great kisser like Brett.

I rummaged through my drawers until I found the perfect T-shirt. The mid-September day promised to be warm and sunny, but the hickey on my shoulder prevented me from wearing a tank top, so I paired it with a pair of shorts and threw my frizzy hair up in a ponytail.

The doorbell was ringing as I ran down the stairs. I opened the door and pulled Brett in before someone could see him. “You must have some kind of death wish.”

“Just want to make sure you show that Eastline pride,” he said with a charming grin. “After all, I am SGA president.”

He was an annoyingly all-around good guy with a sharp mind and a personality that seemed to put everyone at ease, including me. He was the only person who could get past my prickly outer shell and make me swoon.

Of course, I’d never let him know that.

He handed me a rolled-up T-shirt. “I brought you one of my Eastline shirts.”

“Why?” I unfurled it and made a show of wrinkling my nose as though I were disgusted. It was a standard Eastline football shirt with a number on the back—one I’d seen dozens of players on the team wear around town. But then I caught a whiff of his scent, and my pulse cranked up a notch. Dear God, the shirt smelled like him. I resisted the urge to cuddle with it, especially since the source of the scent was standing right in front of me.

“So when you’re sitting in the stands next to Richard, you’ll at least show some school spirit.” He winked before he closed the gap between us. “I thought you weren’t going to come to the game last night.”

“Richard needed a ride,” I lied. In truth, I’d been the one to offer him a ride. I’d become a Brett addict over the last two weeks, and I couldn’t decline a chance to watch him play. Thankfully, Richard—my other best friend next to Morgan—was a huge football fan.

“I could’ve sworn I saw you cheer when I threw that touchdown pass.”

“I think you may have suffered a concussion when that lineman buried you into the turf.”

He chuckled, but continued to inch closer until his lips were a mere breath from mine. “Brushing up on your football slang?”

“Only because I have to listen to Richard.” My mouth was dry. My voice was shaking, and I wasn’t even sure I could form a coherent sentence, but I refused to give in to him. If he knew how attracted to him I really was, he might use my dark secret against me.

After all, that was what my former best friend, Summer, did to me in junior high.

A hint of a challenge danced in his eyes, making the golden flecks in them appear brighter than before.

My head swam, and my knees wobbled. Even though my mind was screaming
Danger!
I couldn’t look away. If he kissed me again, would I fold?

His grin widened as though he’d glimpsed my moment of weakness, and he backed away. “If you want to change into that for the carwash, I can give you a minute.”

“As opposed to helping me into it?”

Shit! Where did that come from? I was trying to fight my attraction to him, not invite him to help me get naked. Besides, his shirt was big enough to expose the mark he’d made on my shoulder a few days ago.

He sucked in a sharp breath. “Is that an offer?”

“No!” I managed to blurt out before I did something stupid. I added a few more steps between us, and my mind immediately cleared. “You’re such a hornball.”

“I’m a seventeen-year-old guy, and you just propositioned me.”

“No, I didn’t.” I flung the T-shirt he’d given me on the banister and pointed to my own shirt. “Read this.”

“ ‘No Means No,’ ” he recited, squinting as he studied the words.

“Exactly, and that includes this stupid carwash.”

I started to head for the kitchen, but within the span of a few heartbeats, Brett’s hand clamped over mine.

“You’re not getting out of this, Lexi.” He tried to pull me toward the door, but I dug my heels in.

“How many times do I have to tell you not to call me that?”

“At least a dozen more times.” When he realized he wasn’t going to pull me outside that way, he lowered his head toward my stomach. A second later, he had me draped over his shoulder like an oversized duffel bag. “Come on. We’re going to be late.”

“Put me down.” I wiggled in the hopes he’d lose his grip, but all it earned me was his hand on my bottom as a means to brace me.

If I’d even been remotely threatened, I would’ve punched him in the nuts and made a break for it. But this was Brett, and as primitive as his caveman way of handling things was, there was a little part of me that secretly enjoyed it. I crossed my arms and blew out an exasperated sigh as he got in the SUV. “This counts as kidnapping, you know.”

“Then you have your exposé for the week,” he replied as he started the engine.

His mellow attitude infuriated me. I balled my hands up into fists. “What makes you think I’d be welcome at the carwash?”

I rolled my eyes. “Oh, yeah, I forgot. You’re the Golden Boy, and everything you touch is sacred.”

“I got to touch your ass today, and my genitals are still intact, so that’s something.”

I reached over to smack him, but he swerved out of my reach with a laugh. “One of these days, Brett…” I warned.

He turned out of our neighborhood and got on the main road that led to our school. “Admit it, Lexi, you liked it.”

I couldn’t contain the snort of laughter that escaped.

“Besides, Lexi sounds more like Lex Luthor, only hotter.”

His geek side was showing. As far as I knew, I’m the only person who’d seen the inner sanctum of his room. Computer-nerd central. No one would’ve ever suspected the hot jock was a closet hacker. “Oh, gee, you see me as an evil mastermind.”

“Aren’t you?” His gaze flickered to me as he drove, and he raised one finger to his lips. “Don’t worry—your secret is safe with me.”

“Whatever.” It sounded so ridiculous, I wanted to call him on it. But the more I thought about it, the more I realized he might’ve been on to something. My Lex to his Superman. Two opposite ends of the social spectrum, and yet, always entwined. “So why did you wake me up and drag me out of my house?”

He stared straight ahead, his fingers tightening around the steering wheel. “I already told you.”

The vague answer grated on my already sleep-deprived nerves. I opened my mouth to press the issue, but he spoke before I could.

“I’m trying out this friendship thing, and friends give friends rides to things, especially when they live around the block from each other.”

His answer hit me like a punch in the gut. Just yesterday, I told him I only wanted to be friends. I’d even admitted that I was scared to go any further than that. But he’d taken it better than I expected. So why did I still doubt the sanity of my decision?

“You know you’re going to catch all kinds of shit for being seen with me.”

“I’ll tell them that we’re tolerating each other’s company and carpooling for the sake of the Earth. Your idea, of course.”

“If it had been my idea, we would’ve taken my car.” My Prius used only a quarter of what his gas-guzzling beast used.

He shrugged. “Next time.”

“We can start carpooling to school in the mornings.”

“Are you kidding me?”

I banged my head against the back of my seat. “Because once we pull up into that parking lot, you’ll see why.”