Read The Quintessence of Quick (The Jack Mason Saga) Online

The Quintessence of Quick (The Jack Mason Saga) 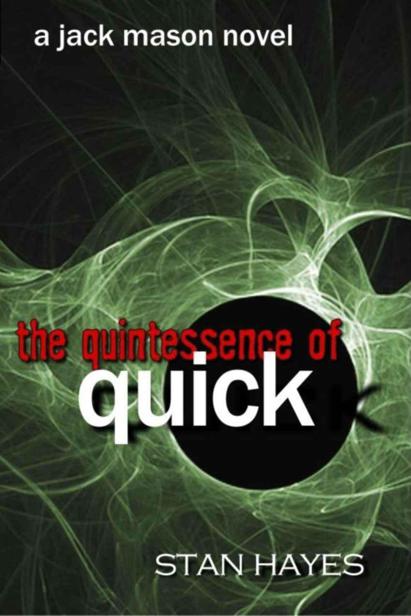 The Quintessence of Quick

The Quintessence of Quick

No part of this book may be reproduced or transmitted in any form or by any means, graphic, electronic, or mechanical, including photocopying, recording, taping, or by any information storage retrieval system, without the written permission of the publisher.

This is a work of fiction. Any resemblance to actual people and events is purely coincidental.

The opening of the Jack Mason Saga:

With all my love.

Our ability to create models- virtual realities- in our brains, combined with our modest-looking thumbs, has been sufficient to usher in another form of evolution: technology. That development enabled the persistence of the accelerating pace that started with biological evolution. It will continue until the entire universe is at our fingertips.

21 When in Cuban Waters

29 Once More, With Feeling

Call me Flx, for now. The kid named me that in 1944, when I hatched from an outsized, egg-shaped marble, a perfect little Northern Goshawk. We were hightailing it out of Los Alamos on US 66 At the time, on the bus that inspired my name, an asthmatic FLXible riding on six “maypop” tires of dubious origin. His mother, the redoubtable Serena, having had a bellyful of
Los Alamos, we split, leaving Jack’s physicist pappy high and dry in the high desert. Destination? Her hometown,
Bisque,
Georgia; natives pronounce it BIS-kew.

Jack and his buddies had scraped a marble ring out of the sandy clay between two splintery Manhattan Project duplexes, but my little birth-orb’s humpty-shape made it worthless as a shooting taw. So he glued cardboard fins on it and painted it olive-drab, prefiguring the nuclear surprise that Dad and his Manhattan Project confreres would soon produce for special delivery to the Empire of Japan. Presently, he’d realize that the explosion of his mini-bomb was way more significant, at least to him, than Fat Man, the primitive device that devastated
Nagasaki.

I chose a bird’s persona to communicate with Jack. He loved watching the Goshawks fly in great, swooping arcs over the desert, so my guise as a newborn example was a low-threat approach. And unless I allow it, no one but Jack can see me. In his sadness and confusion at being separated from his father, Jack needed a resourceful friend. For the last fifteen years, that’s been yours truly. So in a sense we’ve grown up together; I to full hawkness, he to young manhood: scholar, athlete, lover, airman… and felon.

“So,” you say, “yakking agate-borne predator, assuming that we’re buying it, what the hell do you get out of this exercise?” Just a close-up look at my blood line, fellow homo sapiens. Something I’m sure that you’d do in my place, i.e. more than two millennia down the road, dispensing with the bipedal crap-factory that houses your brain, and transiting spacetime at superluminal velocities. Just think of it as quick. The quintessence of quick.

We’ll be in deep water soon enough. First, into the shallows, off the bank of the just-navigable
Savannah River. Augusta, Georgia, hard by the plutonium-spawning Savannah River Project, the Masters Golf Classic and Bradford’s Full-Service Boatyard & Marina, winter, 1959...

Careless of the ripe fuck-aroma that clung to her like a wetsuit, Striker’s skipper booked dock space in
Bradford’s office as Bisque’s youngest millionaire rustled their bags into the parking lot under a lowering overcast. Drowsy green eyes scanned the several rows of cars, but Ralph Williams saw him first; the Buick Century wagon’s familiar treble honk drew his eyes to the opening driver’s door and the lithe body unfolding from behind it. Jack Mason and the bags headed that way. “Hidy, Boss.” One large brown hand took Jack’s, then joined the other in helping him with the bags. “Where d’lady?”

“Th’ Skipper’ll be along in a minute. Can’t just walk off and leave a boat like that without some paper work.”

“Guess not,” he said, peering through the cyclone fence and down to the dock at the boat’s broad stern. “Striker. She’s right good-sized, sho ’nuf. Where’d j’all spend the night?”

“A ways downriver, other side of the lock. And up at the crack a’ dawn, freezin’ our asses off, and no place to plug in for power. Th’ Skipper had to go through first, see; she wadn’t about to get behind some damn empty pulpwood barge.”

Ralph cackled softly as he shook his head. “Sound like th’ Skipper kep you jumpin’.”

Still cackling, Ralph closed the tailgate, again peering down the line of cars. His scan locked on her hips as they moved to a silent languid Merengue. “I reckon this’s her.”

The Skipper’s Yankee-greeting-a-Negro-in-the-boondocks smile was firmly in place as she extended her hand. “Hi, Ralph, I’m Linda Green. Thanks for meeting us.”

When it came to women, Ralph reserved his best smile for his wife and his mother. He produced it now for the auburn-haired Yankee boat captain, the finest-looking white woman he’d ever seen, tatty sweatshirt, threadbare jeans and no makeup be damned. “Ralph Williams, Miz Green. It’s my pleasure. Look like you might make a sailor outa this boy.”

“All in good time, if he behaves himself,” she said, slipping into the front seat. Ralph closed the door behind her, savoring her scent, his blood pressure way north of where it should be, as Jack got behind the wheel and adjusted the seat for his six-two frame.

“I ’magine y’all’d like to get some breakfast fo’ you do any unpackin’ or anything,” Ralph said as they rolled onto the highway, heading out of
Augusta
on U.S. 1 for Bisque. “I told Miz Reba today’s th’ day, and she made me promise to bring y’all by the cafe first thing. But since it’s gettin’ on towards nine, wouldja mind runnin’ me by th’ office first? You know Monday mornins in th’ beer bidness.”

Jack turned the heater fan down a notch from full-blast. “Sure thing, buddy. No problems, I hope.”

“No more’n usual; just Monday. Guess you’ll be comin’ by later on?”

“Audit get done all right?”

“Yeah; least we ain’t heard from ’em since they left.”

“Hm. Well, I guess no news is good news at this point.”

“That’s the reddist dirt I ever saw,” Linda said as they drove between red clay banks cut for the highway’s right-of-way.

“Now you know what they mean by ‘the red hills of
Georgia,’” Jack said. “Guess they have to be seen to be believed.”

“No doubt. But who’s this ‘they’ you’re talking about? It’s not something I ever heard.”

“That’s because you never had the dubious pleasure of listening to a
Georgia
politician. Unwritten law requires that ‘the red hills of
Georgia’ be included at least once in every campaign harangue.”

“What? Oh, that Kingfish. I was thinking Kingfish on Amos ’n Andy. Didn’t remember that in any of his routines.”

“No,” she said with a wry grin, “I was reaching back to Huey Long. Different kind of entertainer, but I’m sure he’d like to’ve had the other Kingfish’s audience. That guy was pretty funny.”