Read The Radio Magician and Other Stories Online

The Radio Magician and Other Stories 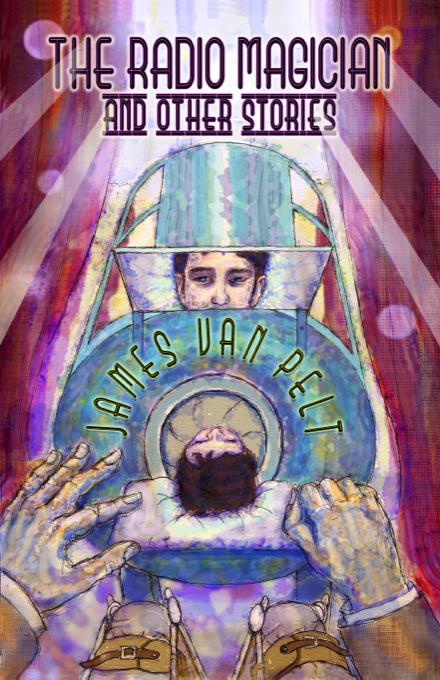 “Musicians and magicians, terraforming and trans-dimensional inns, ice cream as a means to defuse interspecies warfare—James Van Pelt has a wide-ranging imagination, but that’s only the first of these stories’ many pleasures. Van Pelt has an unerring eye for the perfect detail, the understated emotion, and the character that unexpectedly splits your heart along its seam. Read these stories. You will remember them for a long, long time.”

— Nancy Kress, author of
Steal Across the Sky

“There may not be a better science fiction or fantasy writer today, working in the short form, than James Van Pelt.  From the story of a boy stricken with polio who learns magic from a radio magician to the sacrificial figure of a musical genius abducted by aliens, these tales will amaze and move you, all written in Van Pelt’s smooth, lyrical style, with convincing and memorable characters. This collection is a jewel, polished to the high sheen of the literary short story, but with the heart and muscle of great science fiction.”

— Louise Marley, author of
Singers in the Snow

“James Van Pelt brings a polished, literary style to some of my favorite SF themes. I thoroughly enjoyed every one of the stories in this collection. Jim’s characters and the places he takes them are real and delightfully detailed. Each story has its own unique feel.”

— Brenda Cooper, author of
The Silver Ship and the Sea

“Humane, fascinating, original—Van Pelt’s best stories excite the reader in a manner reminiscent of great past masters like Jack Finney and Charles Beaumont. Reading the title story, I yearned toward the page, believing an important truth was about to be revealed or confirmed. It was: James Van Pelt is one of the best short story writers at work today.”

The Last of the O-Forms

Summer of the Apocalypse

Plot is a Metaphor (forthcoming)

The Radio Magician & Other Stories

To my parents, Betty Van Pelt, who encouraged me to read and was never impatient when that was all I did, and to Jack Van Pelt, who let me stay up late at night with him to watch old science fiction and horror movies. Thank you for Tom Swift, Tom Corbett, Godzilla, Dracula, and all of your love and encouragement. 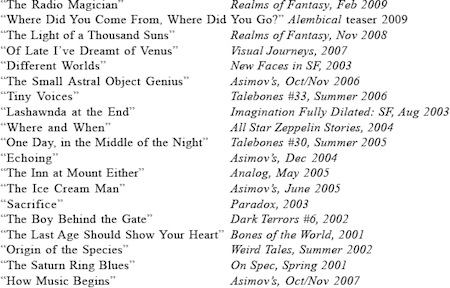 I thought I was going to start by talking about my favorite James Van Pelt story in this collection. But looking over the table of contents, I realized I couldn’t do it. I couldn’t pick just one. I have lots of favorites—a favorite science fiction story, a favorite fantasy, a favorite time travel, a favorite historical, a favorite story about students and teachers (a high school English teacher, Jim tackles the high school experience better than just about any fiction author ever), and a favorite one about families. This is why a James Van Pelt collection is such a lovely thing to have. I don’t
have
to pick a favorite, they’re all here.

This is Jim’s third collection since 2002, which tells you something about how prolific he is. Jim’s been writing a long time. But the last few years—the stretch of time covered in this current book—have seen Jim’s career entering a new phase, taking off, maturing, if I can be so bold as to throw out some of those clichés. He’s risen through the ranks of “hot new writer” to become, dare I say, established. (He’ll probably be shocked to hear this. I know how hard he’s worked to get where he is, and he’s still working that hard.) These days, he’s one of those writers who frequently shows up in the table of contents of top magazines like
Asimov’s Science Fiction
. His stories get reprinted in various Year’s Best anthologies. More than all that, though, he’s one of those writers who you’re happy to see in any table of contents. As in, “Oh, excellent, a new James Van Pelt story!” You can count on him to deliver a good story well told, with characters you care about and powerful insights. These are not easy things to accomplish.

Jim’s stories cover a lot of ground. On one hand, you never know what you’re going to get: the past, the future, time travel, distant space, a quiet story at home, present day in a school. On the other hand, you know exactly what you’re going to get, and it’s the reason you read a James Van Pelt story in the first place: humanity. In his stories, Jim is in conversation with his culture, with history, ideas, literature, people. Different kinds of people, groups of people, individuals. Students, family, fellow writers, fellow teachers, the world. Across time and space, what’s come before us and what lies ahead. He’s comfortable writing about the distant past and the end of the universe. His settings, as carefully researched and created as they are (“The Radio Magician” puts us right in the middle of the almost-forgotten polio epidemic), are tools for telling the bigger stories, the
real
stories. Whatever else they’re about, they’re primarily about people.

That should seem obvious. Every fiction how-to book and writing workshop discusses character development and motivation, how the story grows out of character, and so on. While most stories have characters, I’d argue that not all of them have
people
. Jim’s stories are about people. The point of “The Inn at Mount Either” isn’t the amazing hotel with interdimensional capabilities. It’s about confronting a nightmare: what if you lost the person you love most in the world—but only slightly? I suppose I could also go on about metaphor, since a lot of commentary about science fiction discusses metaphor and how the fantastic elements of the genre symbolize other themes that anchor the story to the real world. In that regard, I could talk about how the Inn is a metaphor for what happens when a couple grows apart, recognizing that the person you married isn’t quite the person you’re now with, the terrible fear that comes from realizing the comfortable life you thought you had no longer exists. But to say the Inn is “just a metaphor” belittles the story. Because the “what if” of the fantastic taps into our subconscious better than glib metaphor ever could. It’s what made the classic
Twilight Zone
episodes so powerful, and what makes the Inn so memorable. Dorian really has lost his wife, without losing her. Glib metaphor is safe and easily glossed over. But that sick feeling in the pit of my stomach I get while reading the story? That’s real.

Okay, I changed my mind, I am going to pick a favorite. At least, a favorite at this moment in time, and a favorite when I got to read an earlier draft of it: “Where Did You Come From, Where Did You Go?” is a thought experiment. It’s also about two smart high school girls sitting in class, when something completely bizarre and unbelievable happens. The story itself is a lovely, squicky, nerve-wracking mini-thriller that gets under the skin in the best tradition of
The Twilight Zone
. But on a more personal level, Olivia is me. I was an intense, engaged, starry-eyed high school kid who thought she was going to change the world but wasn’t sure how she was going to do it. That character is so recognizable, and I’m sure Jim’s been seeing her every day his whole teaching career. But the amazing thing is how well he captured her on the page in Olivia. I felt like I was looking in a mirror. What happens to Olivia and Latasha—I take it personally. Talk about getting under my skin.

There’s a line from William Faulkner’s Nobel Prize acceptance speech that gets quoted, perhaps overquoted, about how the only thing worth writing about is the human heart in conflict with itself. (The speech, delivered in 1950, is available to read and hear on the Nobel Prize website, www.nobelprize.org.)

I looked up that quote, intending to talk about it blithely, like most people do, because Jim is one of those writers who “gets it.” His stories, even the ones about mutants and robots, are about people duking it out and struggling to survive and make sense of the world, and themselves. In reading the speech that the quote came from, I discovered what prompted Faulkner to make the speech in the first place and how amazingly out of context everyone’s been taking it all this time. He wasn’t just tossing off a pithy statement about the function of literature. He was warning us about the death of art.

“Our tragedy today is a general and universal physical fear so long sustained by now that we can even bear it. There are no longer problems of the spirit. There is only the question: When will I be blown up? Because of this, the young man or woman writing today has forgotten the problems of the human heart in conflict with itself which alone can make good writing because only that is worth writing about, worth the agony and the sweat.”

So. Global war and the atom bomb are distracting us from the true worth of art. Maybe even destroying art. People are too afraid of annihilation to acknowledge such a small thing as the internal struggles of the human spirit. The thing is, putting that quote back in context? Jim still gets it. He writes about that very fear, and how to overcome it. (Literally, in “The Light of a Thousand Suns,” and in every one of his stories that starts with Armageddon and ends with hope. Jim’s written a whole novel about that,
Summer of the Apocalypse
.) He’s been able to make that fear concrete, to humanize it—to discover the human heart in it rather than being overwhelmed by the abstract. Here’s the end of Faulkner’s speech:

“It is his [the writer’s] privilege to help man endure by lifting his heart, by reminding him of the courage and honor and hope and pride and compassion and pity and sacrifice which have been the glory of his past. The poet’s voice need not merely be the record of man, it can be one of the props, the pillars to help him endure and prevail.”

Yeah. Jim gets it. I think Faulkner would be pleased to know that these stories exist, answering his call to arms, or rather, pen.

Voyage of the Dead - Book One Sovereign Spirit Saga by Forsyth, David
Hero Rising by H.T. Night
I Sleep in Hitler's Room by Tuvia Tenenbom
Salvatore: a Dark Mafia Romance by Natasha Knight
Melody Burning by Whitley Strieber
The World Has Changed by Alice Walker
Warriors Super Edition: Yellowfang’s Secret by Erin Hunter
Pictures of Emily by Weir, Theresa
The Ghosts of Blood and Innocence by Constantine, Storm
Coming Home (The Morgans) by Grey, Savanna