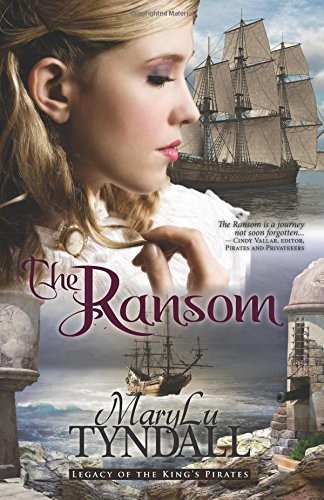 Legacy of the King’s Pirates

All Scripture quotations are taken from the King James Version of the Bible.

All rights reserved. No part of this publication may be reproduced, stored in a retrieval system, or transmitted in any form or by any means without the written permission of the author, MaryLu Tyndall.

This book is a work of fiction. Names, characters, places, incidents, and dialogues are either products of the author’s imagination or used fictitiously. Any similarity to actual people, organizations, and/or events is purely coincidental

My heartfelt thanks go to so many who helped in the writing of this book. To my fabulous editor, Lora at EditsByLora.com . I couldn’t have done this without you! Special mention to Anica for help with a sticky plot problem! Many thanks to Susanne Lakin and Michelle Griep, fabulous authors and friends, who read through the book and fixed all those little things I missed. Special mention goes to Dineen Miller, who designed this gorgeous cover, along with postcards and bookmarks and several other things I needed. You are one talented lady!

Of course, I would be remiss if I didn’t thank my Motley Crew, several of whom also helped proofread the manuscript, and
all
of whom help spread the word about my books. I run a tight ship, but my crew is the best group of sailors who ever graced the Caribbean. I love you all and appreciate you so much!

Most of all, I thank God for giving me stories and a platform with which to share them with the world. I love you, Abba.

The Cat and the Fiddle Tavern, Port Royal, Jamaica

Murk, mire, and mayhem. ’Twas the only fitting description for the punch house in which Juliana Dutton found herself. No, not found herself. She had come here on purpose, passed through the display of debauchery once on her way to the brothel beyond, and now, yet again, on her way back to the street. Only this time, the room overflowed with patrons—if patrons was a fitting term for the slovenly-attired men and women guzzling their drinks amidst shouts and curses and a discordant fiddle. What had she been thinking?

But she had to make sure one last time that her friend Abilene was not among the dissolute cullions flooding the room—that the woman had not been hiding when Juliana had passed through before. Or worse, swallowed up in the arms of some foul ruffian. Yet, as Juliana peered from beneath the hood of her cloak, cringing at the visions that met her eyes, her friend was nowhere in sight.

What
was
apparently in sight was her.
Dozens of glazed eyes fastened upon her as she wove through tables laden with mugs of Kill-Devil rum, card games, flickering lanterns, and plates brimming with roasted boar and fish pudding. The scent of food joined the odors of sweat, smoke, and bitter spirits, creating a stench that would keep the Devil himself away. Though, from the befouled language and equally befouled sights, it appeared he was already present.

The ensuing whistles and lewd invitations proved her assumption correct. Air fled her lungs. Gripping her throat, she hurried toward the door. A chair slid in her path. A man rose before her, brashly eyeing her from the hood of her cloak to the tips of her red mules. A brace of pistols crossed a chest the size of England adorned with a red doublet trimmed in metallic lace. Two formidable swords hung from each hip. A scar on his neck disappeared behind a stained cravat that bubbled over his shirt like the ale foaming on his mustache.

With a jeweled finger that belied the crusted dirt beneath his nail, he yanked off her hood, releasing her golden waves. One would think none of the men had ever seen flaxen hair on a woman before as groans of pleasure swept through the crowd.

Followed by vulgar suggestions that shocked her and caused her to tremble violently.

“She be askin’ fer it by comin’ here,” another man yelled, triggering an outburst of laughter.

Yet the man kept staring at her. Mad dog, indeed. A rabid one from the looks of him.

Juliana was not a timid sort, not a woman prone to hysterics or swooning, but when the rake clutched her arm and leered at her with teeth the color of dirt, her heart nigh burst through her chest.

From behind the brute, a voice boomed like the crash of a massive wave. The pirate glanced over his shoulder, stiffened, then released her with a grunt. Wiping his mouth on his sleeve, he picked up the chair, shoved it beside a nearby table, and toppled onto it like a felled tree.

Moans of disappointment filtered through the mob before the music resumed and the men returned to their drink and games. Tugging her hood back atop her head, Juliana searched for her rescuer, unsure what price his chivalry bore. But no one came forward to claim his prize. Before the man revealed himself, or worse, before Mad Dog reconsidered, she dashed for the door, surprised when no one paid her any mind. No leers, bawdy comments, groping hands, lecherous grins. It was as if she’d disappeared. Mayhap God had made her invisible. She was, after all, on a mission of mercy.

Nearly at the entrance, her gaze latched upon a pair of startling blue eyes—so piercingly blue, they almost stopped her. They definitely slowed her. Mayhap it was the man’s coal black hair, dark stubble on his jaw, and sun-bronzed face that made the color of his eyes so luminescent. But no, there was something else within them. An intelligence, an intensity … and now a bit of humor as his gaze remained upon her. He leaned against a thick post, calm, quiet, sturdy—a bastion of control amidst the clamor surrounding him. Rounded, sinewy arms folded over his leather jerkin, Hessian boots crossed at his ankle. His lips lifted in a mocking grin.

Turning her face away, she shoved past a group of inebriated patrons and fled down the stairs onto Thames Street. Pulse hammering, she searched the shadows. Oh, fie! Where was Mr. Pell with her carriage? She’d instructed him to wait for her right here. A blast of wind tore off her hood and flooded her with the scents of salt and brine, roasting fish, and other unsavory odors that glutted the town of Port Royal, Jamaica. Her home for the past four years.

Another distinguishing feature of the town was that a lady should never venture out unescorted after dark, especially near the wharves. Which, of course, was precisely where she was, searching for her wayward footman. Though the sun had barely set, pirates, privateers, and other nefarious sorts roamed the streets, filling their guts with rum, their beds with women, and their hearts with darkness. Slipping into the shadows, she ducked her face within the folds of her hood and hurried down the sandy street, praying for God to watch over her.

She had barely gone a few steps when two men grabbed her and dragged her down an alley. She opened her mouth to scream. A leathery palm slammed onto her lips. She tasted blood. She tasted other things as well. Dirt and rum and remnants of the man’s dinner. Her stomach vaulted. She kicked and clawed as the man yanked her farther into the shadows. His friend snickered in anticipation.

So, this was to be her fate? This was the reward for her charity? For her care of Abilene, her work at the orphanage, her undying devotion to a father who had never loved her and a brother who did naught but despoil their family name?

Dear God in heaven, where are you?

The man shoved her against a brick wall. Sharp stone poked her back through her stays. She vainly tried to reach the knife in the pocket of her cloak, but the man held her arms firm.

“I ne’er seen the likes o’ such a lady prime fer the takin’,” the man’s friend exclaimed, his hot, putrid breath saturating her face. She coughed.

The first man clawed at her bodice. “Aye, a rare treat, says I.” His voice was course with spit. “An’ one I richly deserve.”

Juliana found her voice. “You deserve nothing but
hell
!” She thrust her body against his, thrashing her legs and arms, but they bounced off rock-hard muscle.

“Aye, a truer word has ne’er been spoken.” He chuckled as his friend came to assist him.

“Do you know who I am?” Juliana shouted, hating the tremble in her voice. Outmatched in strength and unable to reach her knife, all that remained in her arsenal of defense were her wits. And surely she could outwit these fish-brained slugs. “I am Juliana Dutton, daughter of Henry Dutton, one of the wealthiest merchants in Port Royal! He has powerful friends—Lieutenant Governor Beeston among them. And I assure you, gentlemen, he will have you drawn and quartered if you proceed with this fiendish deed!”

Her declaration only further amused the ruffians as they exchanged a hearty laugh. Abandoning her bodice lacings with a grunt, the man reached down to lift her skirts.

Breath huddled in her throat. Her knees quivered. And Juliana did the only thing she could. She screamed with all her might.

Gravel crunched. The dark outline of a man appeared at the head of the alleyway. Her assailant gave the intruder a cursory glance before he continued fumbling with her skirts. The second man drew a sword. A metallic chime echoed off the walls as the newcomer rapidly advanced. After one more glance over his shoulder, the beast who held Juliana suddenly stiffened. Releasing her, he slowly backed away while gesturing for his friend to lower his blade.

Juliana plucked the knife from her cloak and held it before her. It was ludicrous to assume she could defend herself against
now
three assailants, but she would not be ravished without a fight.

“Begone with you!” Authoritative words exploded from the intruder’s lips, tumbled down the length of his drawn sword, and shot from the tip with the same impact as if the blade had pierced the men’s hearts. With wide-eyes and raised hands, they retreated. “We didn’t know she be yers, milord.”

“Now you do.” The same voice from the tavern chased them down the alley as they scampered away.

The Story Shell: A Tale of Friendship Bog by Gloria Repp, Tim Davis
Varangian (Aelfraed) by Hosker, Griff
Kissing the Werewolf - An Izzy Cooper Novel by Kendra Ashe
At the Edge of the Sun by Anne Stuart
McKenna, (Sweet Western Historical Romance) (Nevada Brides Series Book 1) by Clara Kincaid
All Art Is Propaganda by George Orwell
The House Without a Christmas Tree by Gail Rock
Evacuee Boys by John E. Forbat
Kiss Tomorrow Goodbye by Horace McCoy
That Smell and Notes From Prison by Sonallah Ibrahim