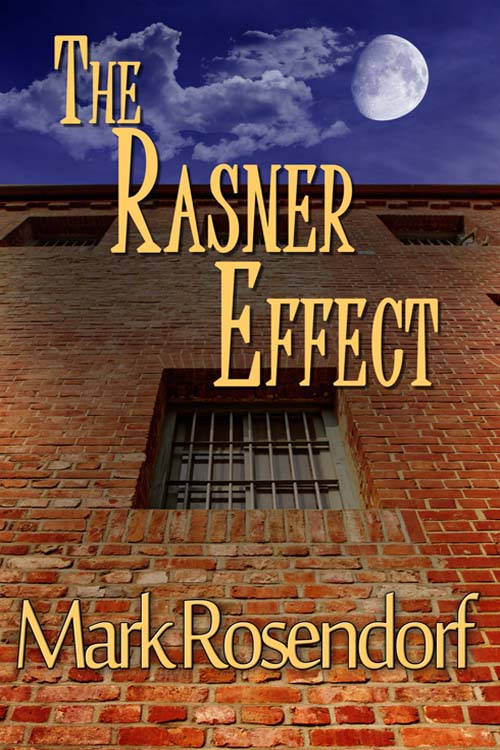 Praise for THE RASNER EFFECT

Praise for
THE RASNER EFFECT

“...a fast action-packed second half with a first half that gets you totally immersed in the characters. This is a must read for all suspense & thriller lovers.”

Find a comfy chair and strap yourself in for an electric jolt from a new writer who, I hope, will thrill us again soon.”

“The author’s detailed study into the delusional world of the criminally insane...fills the reader with a dread that there may actually be people with the same traits in the real world. This was a quick read that compelled me to read compulsively until finished.”

“
...
a multifaceted psychological thriller peopled with convincing characters, packed with gritty, pithy discourse all set against a backdrop of trickery, maneuvering and danger. The outcome of this narrative may surprise readers, and will indisputably cause reader speculation re who really is the good guy, and who is not.”

To Mom and Dad, who gave me life,

and to my fiancée, Sue, who makes life worth living.

“Chaos” was the only word Jake Scarberry could think of to describe his situation. The panicked screams of civilians running for their lives echoed all along the expressway. A bit further away, the symphony of screams melded with the honking of unsuspecting commuters stuck in a logjam of traffic. Jake stood alone on the bridge, the heat already seeping through his thin-soled boots. Black smoke, trapped beneath low-hanging clouds, filled his lungs and nostrils. It was five p.m., but today everything seemed darker than normal.

Despite the explosion, the bridge connecting the boroughs of Queens and the Bronx remained standing and Jake was glad about that. He certainly had no interest in experiencing the long drop into the East River if the bridge were to collapse. He couldn’t remember the name of the bridge, but that was the least of his concerns at the moment. The important thing was surviving a battle that obviously wasn’t over yet, not with the pair of determined and psychotic dark blue eyes staring at him through the haze.

The man, smaller and years younger, inched his way forward, sidestepping abandoned cars with a single-minded focus. At one juncture, he disappeared in a cloud of smoke. When it cleared, he gripped a tire iron like a spear in his right hand. In his left, he still held the small black detonator box.

Was another charge about to detonate? Had he mistakenly assumed this to be a diversion so the rest of his group could escape? Jake guessed it didn’t matter right now.

Keeping his eyes on the man, he used one hand to remove the burnt and still smoking Kevlar vest. Smoke wafted from his adversary too, yet no pain showed on the man’s face. Was he a good actor or had he somehow remained uninjured in the horrifying blast?

Jake clenched his fists and prepared for what could quite possibly be both their final battles—the assassin because he’d been paid to do a job, Jake because he’d been hired to stop this group called “The Duke Organization.”

First, he had to go through this man. He stood fifteen feet away now.

Jake’s head spun. His throat and lungs burned with the acrid smoke. His knees wobbled like jelly—instinct screamed to grab hold of something solid. But that would show weakness to his adversary.

Ten feet away. How much longer could he keep from passing out? He had no weapon save his fists. What defense would they be against the tire iron?

Six feet. The blue eyes burned with hate. And something else—victory.

Not yet!
Jake managed to keep himself from shouting.

Through the cloud, three soldiers in full military gear appeared. One aimed a pistol and fired a shot to the back of the man’s head. With an expression of surprise, he collapsed in a heap. The detonator flew from his fingers. It bounced twice. Jake braced himself for another explosion.

None came. A fog crossed in front of his brain and he felt himself falling.

Jake struggled to open his eyes, defying their insistence on remaining closed. No longer on the bridge…that was obvious. The smell had changed from acrid to the sharp pungency of ammonia. But more than that, the hard bridge pavement was now soft, yielding. At last he squinted his eyes open enough to see white, lots of it. “Hospital,” his brain whispered. Something moved. It was white also, and closer. And it had breasts. “Nurse.”

Jake tried to sit up. The same time the nurse said, “Stay on your back or you’ll be sick,” nausea struck. Like a train it roared over him, smashing and splattering in its wake. The nurse shoved something under his chin. For a long time, he dry-heaved. He swallowed the last of the bile that seemed to burn more going down than it had coming up. She shoved a damp cloth into his palm. He scrubbed it across his mouth, looking down so he wouldn’t have to see the pity on her face. Shit, he’d never barfed in front of a woman before.

He fell back on the bed, eyes closed to the humiliation. The blanket shifted over him. “You’re doing pretty good considerin’ the beatin’ you took.”

“Beat…” Then he remembered. The bridge. The explosion. The Duke Organization. His employers, the United States government, hired him to stop a fellow group of mercenaries from accomplishing their mission. “How long…”

Damn. The Duke Organization must be in shambles by now. Little by little, his vision cleared. The nurse finished hanging a plastic bag of something clear. He followed the length of tubing to the connector in the back of his hand. She tucked the covers once more, bending low. The name tag said Donna. The cleavage said deep…

“You have a visitor.” She gestured over her shoulder.

Jake turned his head, slow so his stomach wouldn’t erupt again. An obese gray-haired man stood on the right-hand side of the bed. He wore a general’s uniform with three stars along the right side of the collar. What was he doing here?

“What are you doing here?”

“Your mission is over, Mister Scarberry. We won’t be in need of your services any longer.” The man shifted from one foot to the other. “Needless to say, I am not entirely pleased with the results you achieved.”

“What about our bargain, General?” Jake heard unmistakable hostility in his voice. Had Straker heard it too?

His expression never wavered. General William P. Straker was in his late 60s with short gray hair and a clean-shaven face, although Jake always thought the General would be better off with facial hair, to hide his double chin.

“It will be honored, of course. It’s just a matter of working out a few details. I’m sorry your brother couldn’t be here to work out those details himself.”

So was Jake; it would be nice to see a friendly face right about now. “What about the rest of the group? If they’re still out there, you have to hunt them down before…”

“The Duke Organization is crippled and in disarray. We have effectively cut off one of the primary heads of the dragon.” The General’s tone made it apparent he didn’t expect a debate on the issue. “They’re on our radar. We know who they are, and now, they will need to stay in hiding. We don’t figure to hear from this group again.”

“But they’re crazy!” Jake snapped, the rumble of bile churning into his throat. He made a conscious move to relax. “You can’t predict the actions of crazy people. That’s what makes them crazy.”

“I have bigger priorities right now. Starting with the victims of this bridge fiasco you did very little to prevent,
Mister Scarberry
.”

Jake bit his lip as the general accented the last two words, as if his previous military record didn’t matter. “I re-routed their target before the hit could take place,” Jake reminded him. “There’s no way I could have expected them to have a bomb on a crowded bridge, much less detonate it once they realized their mission was negated.”

“This case is closed. I assume you understand the necessity for secrecy on this subject?”

“I know the program, Straker! Just make sure I get what’s coming to me.”

“Not to worry, Mister Scarberry, you will…you will.”

Jake didn’t like the way that sounded, but further argument would be counterproductive.

“Now, if you will excuse me, I have other business in need of my attention.” Straker spun on a heel. He stopped with a hand on the knob, but didn’t turn back around. “Get dressed and get out. My people will be in touch with you shortly.”

In a facility across town, Rick Rasner woke feeling groggy and confused. The florescent lights made it painful to open his eyes. He had no idea how long he had been unconscious, or why he found himself on a cot in what he assumed was a hospital room. As his vision cleared, he noticed a large, rectangular table with surgical equipment, syringes, laboratory glassware, and a weird looking electronic machine. He suddenly realized he was not in a hospital room at all. In fact, he had no idea where he was. There were two computers, each on a desk against the wall farthest from him. Rick squinted, but from this distance, he couldn’t make out what was on the flat-panel screens.

His head itched. He slipped his hand from under the stark, white sheet and scratched. Then he frowned and palmed his scalp. What the hell was going on? The whole right side of his head was shaved clean. Mirror, he needed a mirror. He flew to a sitting position, stopped to let the intense vertigo pass, then swung his leg over the edge of the bed. His left fist tightened, caused by an instinctive reaction when he realized he was not alone in the room.

“You should remain still,” said a soft voice from behind.

In the corner shadows sat a man wearing a white lab coat buttoned to the neck. He had a pair of reading glasses perched on the end of his nose. He dipped his head to gaze over the frame and repeated his recommendation.

Die for Me: A Novel of the Valentine Killer by Cynthia Eden
A Reputation to Uphold by Victoria Parker
Mark of the Rose: The Tudor Vampire Chronicles by Kate Pearce
Act of Faith by Kelly Gardiner
The Fixer by Joseph Finder
Jackson Jones and Mission Greentop by Mary Quattlebaum
Ms America and the Whoopsie in Winona by Diana Dempsey
The Last Nightingale by Anthony Flacco
Dreamlands by Scott Jäeger
Anyone but Alex (The English Brothers Book 3) by Katy Regnery