The Rebels: The Kent Family Chronicles 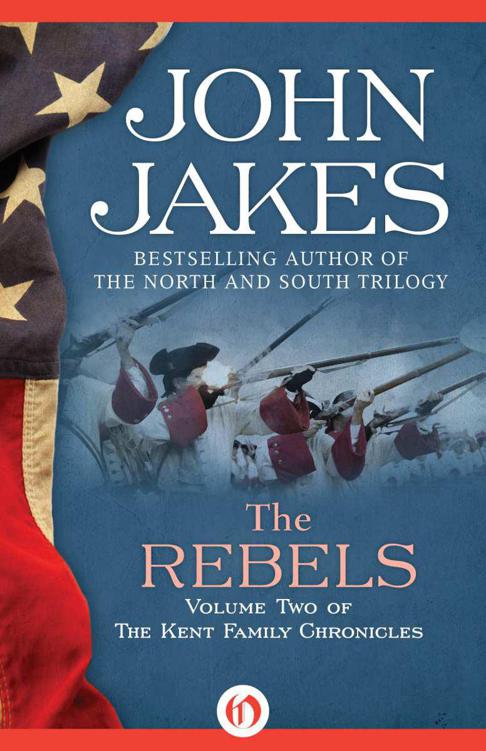 For my daughter Andrea.

“You will think me transported with enthusiasm, but I am not. I am well aware of the toil, and blood, and treasure, that it will cost us to maintain this declaration, and support and defend these States. Yet, through all the gloom, I can see the rays of ravishing light and glory. I can see that the end is more than worth all the means, and that prosperity will triumph in that day’s transaction, even although we should rue it, which I trust in God we shall not.”

writing to his wife Abigail

Book One
Our Lives, Our Fortunes and Our Sacred Honor

Chapter I. A Taste of Steel

Chapter V. The Guns of Winter

Chapter I. The Privateers

Chapter V “I Mean to March to Hostile Ground”

Chapter I. The Wolves

Chapter II. The Guns of Summer

Chapter IV. The Price of Heaven

Chapter V. The Woman From Virginia

Epilogue The World Turned Upside Down

A Biography of John Jakes

Book One
Our Lives, Our Fortunes and Our Sacred Honor
CHAPTER I
A Taste of Steel

A
BRITISH DRUM STARTED
a slow march cadence. Others joined in. The thudding spread across a broad front at the southeast end of the Charlestown peninsula.

For a moment the drums sounded abnormally loud in the hot summer air. There was a temporary lull in the crashing of the cannon from the Copp’s Hill battery in Boston across the Charles, and from the ships that had ringed the peninsula in order to rake it from all sides.

“Guess he did,” Philip said. Speaking was difficult. His throat was so parched he could barely whisper.

He twisted the ramrod twice more to seat the paper wad on top of the powder and the ball in the muzzle of his precious British-issue Brown Bess musket. He wished to God he could find a drink of water.

His stomach growled. Actually hurt from lack of food. All the rations he’d packed when they mustered in Cambridge at sunset last night were gone.

Besides that, he ached. My God, how he ached. All night long he’d labored with the other colonial soldiers on top of Breed’s Hill, digging a redoubt after the officers settled their argument about the exact wording of the orders. Were the men to fortify Breed’s Hill, of Bunker’s, which lay northwest toward the isthmus connecting the Charlestown peninsula with land more easily defensible?

Finally, an engineering officer named Gridley settled it. Breed’s. Concealed by darkness, the Americans dug their square fortification, almost a hundred and forty feet on a side, with an arrow-shaped redan jutting from its south side to overlook the sloping meadow that ran down to the Charles River.

The black man next to Philip in the redoubt had said his name was Salem Prince. Philip had no idea where he’d come from. But then, he didn’t know a fraction of the several hundred soldiers jammed down inside the dusty pit in the earth, where the temperature this blazing June afternoon had to be well above a hundred.

It was doubtful that the black man belonged to the Massachusetts regiments. Or the Connecticut forces under the old Indian fighter, Putnam, who were digging in behind them on a knoll on farmer Bunker’s property. The black man had simply appeared one moment when Philip was crouched down, head covered, as a cannon ball screamed over. The ball had blasted a crater into the hillside leading down to the Mystic River on the left of the redoubt. When Philip looked up, the black man stood at his left, running his hand up and down the muzzle of his antique squirrel gun and smiling shyly. Though the American army was a ragged one, the black was even more ragged. Probably he was a free man of color who had slipped out to the peninsula on his own accord. The army, such as it was, didn’t mind volunteers one bit.

Now Philip and Prince exchanged anxious glances. Both heard the drums. Both tried to shrug and grin cynically as if the sound didn’t matter. Both knew otherwise.

Philip was nearly as dark as Salem Prince by now. Dirt stained his skin, his knee breeches and patched hose and loose, sweat-sodden shirt. In the confusion of men running in and out of the redoubt, there was no way of telling to which unit a man belonged. Few wore uniforms.

But the ebb and flow was constant. New volunteers arrived. Other men sneaked away, using the moment when a cannon ball exploded and heads were covered to escape the hot, filthy fortification that somehow reminded Philip of a large, freshly dug grave.

The man on Philip’s right craned up on tiptoes, peered over the earthwork. Another cannon ball struck, and another. Closer. Clods of dirt showered down on Philip, who had shut his eyes.

But he couldn’t shut his ears. He heard the drum cadence growing louder.

A terrifying image swam in his thoughts. Bodies lying unidentified in this dirty, foul-odored pit. Christ, what if one of them should be his—?

Philip Kent, born near the village of Chavaniac, France, 1753. Died on a beautiful Saturday, the seventeenth of June, in the year 1775
—

Anne
—! he thought, anguished. Somehow, he would come through.

The drums thudded. Another cannon-crash shook the ground. At least they were getting accustomed to the roar of those iron monsters.

The American fortification had been dug by stealth, during the dark hours early on the seventeenth. The activity had been discovered by some sharp-eyed fellow aboard His Majesty’s Ship
Lively.
The first round thundered from the ship at about four in the morning.

Some of the green troops screamed in outright terror. Not long after, another ball blew off the head of a man named Pollard working outside the redoubt. The corpse tumbled into the damp grass in the first faint light of morning.

Pollard’s blood-gouting stump of a neck was a vivid warning—if one were really needed—prophesying what the day might bring to every man on Breed’s Hill.

As the hot morning wore on, the realization dawned that the British guns in the river and over in Boston weren’t angled properly to do much damage. Yet their incessant thunder had a power to rip the nerves and clutch the bowels with a universal message that could be seen on most every sweaty face:

Today I may die for daring to take up arms against His Majesty, King George III.

Now the cannonading increased again. Philip wanted to peek over the earthwork, see what he and his fellow soldiers would be confronting. For a moment he lacked the nerve. A shout brought him pivoting around:

Even before Philip raised up to risk a look, he saw the smoke and flames. Under an intensified bombardment of red-hot ball mixed with carcasses that shattered on impact, releasing their oiled combustibles, fires were already burning on rooftops in the little waterside town of two or three hundred houses. The town’s frightened residents had already fled.

“The reinforcements have beached,” someone said.

“Royal Marines,” someone else added.

Another voice, shaky, put in, “The regulars have started up. Look—”

“Keep quiet so you can hear the command to fire!”

That hard, cracking voice belonged to the field commander, tall and graying Colonel Prescott of Pepperell. Through the tangle of men in the redoubt, Philip saw Prescott collapse a spyglass and head for the fortification’s single rear entrance. Just one means of escape for all these hundreds. What if the redoubt were overcome? He felt more and more like a man already interred.

Suddenly, he caught an excited murmur:

An exceedingly handsome and fair-haired man with musket and sword had just stalked into the redoubt. Dr. Joseph Warren, a Boston physician, was one of the prime movers of the patriot cause in Massachusetts. Philip had come to know Warren while working at the Edes and Gill printing house.

“Your servant, sir,” the unsmiling Warren said to Prescott.

Prescott seemed taken aback for a moment. Recovering, he spoke over the drumming and the cannon-fire:

“No, Colonel, I’m here as a volunteer. My commission still exists only on paper, waiting to be signed. I’ll take my place with the others.”

Men nearby raised a brief cheer as the physician, a figure of supreme if sweaty elegance in his gold-fringed coat, walked through the dust to a position at the dugout earth wall. Prescott vanished at the redoubt’s narrow opening, to take charge at the breastwork which ran down the side of the hill on the left.

The drumming grew louder.
I should look at the enemy,
Philip thought.

Just then, Warren spotted him. The physician hurried over, managing a smile:

“Kent?” He extended his hand.

“I hardly recognized you.”

“The work in here has been a mite dirty.”

“Yes, sir, we were married a month ago. Anne’s living in rented rooms in Watertown. Her father, too.”

“Well,” said Warren, “if we give Tommy a sharp fight, you’ll get back to see her soon.”

With a wave, the doctor returned to his place at the wall. His presence still produced gapes and admiring stares. Warren was one of the most important leaders of the rebel cause. In concert with John Hancock, the Adams cousins, Samuel and John, the silversmith Paul Revere and others, he had been instrumental in pushing the Americans of Massachusetts to armed confrontation with the British. That a man of such prestige and position would come to this potential death trap to fight like an ordinary soldier seemed to have a heartening effect on those in the redoubt. It certainly did on Philip Kent.

What time was it? About three o’clock, he guessed from the angle of the sun. Despite the almost incessant pounding of the cannon, he stood up on tiptoe to look out toward Morton’s Hill and see the challenge facing them this afternoon.

He gasped when he saw the red lines advancing across virtually the entire peninsula. His hand closed around the muzzle of his Brown Bess. His palm sweated, cold.

Scarlet. Everywhere, scarlet. A thousand or two thousand British soldiers at least. And the American forces must have shrunk to half that number by now.

It was a parade march. Slow; steady. A march to the drumbeats that thudded between cannon bursts. The soldiers formed long scarlet lines stretching to the Mystic River. Company flanking company, they were marching against the redoubt; against the breastwork; and, further down, against the hastily erected rail fence where straw had been piled to stop musket balls. Still further down, more companies were advancing against the stone wall erected hastily between the fence and the river’s edge. Behind the various fortifications, shabbily dressed colonials waited.