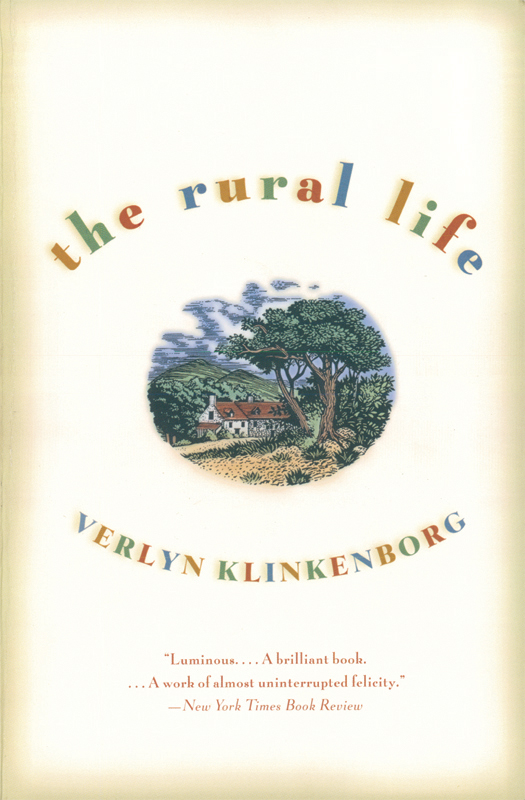 On the joy of reading Verlyn Klinkenborg’s

“The freshness and delight of
The Rural Life
are in the pose of canny innocence, of seeing old things sideways and new.… This is a lovely, intimate chronicle, full of
humor, wisdom, and poetry about country living and the concrete pleasures of tending and gardening for which our hands and
hearts yearn.”

“Klinkenborg’s vision is far sharper than that of any hawk that might circle the fields of his small upstate New York farm.
He sees not only the minute detail, but the link that defines its place in the wider and timeless world to which it belongs.…
Klinkenborg doesn’t just tap a fine literary tradition. He adds to it.… He is a master wordsmith. The paragraphs he turns
out boast the diamond-like glitter of the perfectly chosen word or phrase.”

“Klinkenborg is disciplined and wary, a writer of hyper focus who uses the essay form to see beyond himself.… These essays
offer many pleasures, but the greatest is in the language, in the building of embodied sentence upon embodied sentence as
Klinkenborg leads us to an image that surprises with its rightness.”

“
The Rural Life
speaks in a voice that is individual without being unusual. Klinkenborg eschews exhibitionism; he disdains glitter, more
interested in delivering clear and just impressions than in outlining them in neon. He is a disciplined appreciator.”

“There is an elastic, supple, inclusive quality to Klinkenborg’s prose. Without rushing headlong anywhere, it manages to connect
the most unexpected dots.…
The Rural Life
is arresting, even profound, forcing us to look at the world in a new way, welcoming us to a new understanding of our place
in things.… Read
The Rural Life
in small pieces at a time for the beauty of the moments Klinkenborg has thought to dwell upon.”

“Exquisite.… Wherever Verlyn Klinkenborg goes, he captures the essence of the place in commentary that can be wry or lyrical
but is always penetrating.”

“It becomes clear that Klinkenborg’s essays are actually attempting something much more interesting than recounting a rural
idyll. Rather, they’re looking at how the rural experience shapes men and women, how the land itself talks to you if you’re
willing to listen.…
The Rural Life
is a book about life lived near nature, about the juxtaposition of wildness and cultivation that is the rural landscape.”

“
The Rural Life’s
charms are so subtle.… The individual meditations are self-sufficient, each a little gem with passages so witty and insightful,
readers will find themselves looking around for somebody they could read them to.”

“Replete with startling images and beautifully phrased thoughts.…
The Rural Life
sparkles.… Klinkenborg is a master at showing us the familiar in new and illuminating ways and has produced a book that can
be profitably read and reread throughout the year, by country and city dwellers alike.”

The Rural Life
is dedicated to my dad,

A Note on the Type 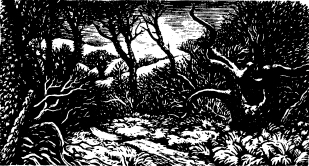 E
very year about now, I feel the need to keep a journal. I recognize in this urge all my worst instincts as a writer. I walk past the blank books—gifts of nothingness—that pile up in bookstores at this season, and I can almost hear their clean white pages begging to be defaced. They evoke in me the amateur, the high school student, the miserable writerly aspirant I once was—a young man who could almost see the ink flowing onto the woven fibers of the blank page like the watering of some eternal garden. It took a long time, a lot of pens, and many blank books before I realized that I write in the simultaneous expectation that every word I write will live forever and be blotted out instantly.

It’s hard to keep a journal under those conditions. It’s harder still when it becomes clear that the purpose of a journal—at
least of those journals begun in earnest on the first day of January—is not to record, day by day, just a fragment of thought
or observation but to herd all one’s days, like so many sheep, into a single pasture and prevent them from escaping. What
drives the impulse toward New Year’s journal keeping is also the shocking realization that the only thing left of the old
year is a few tufts of wool caught in the barbed wire. What I want a journal to do could be done just as well by a more aggressive
savings program.

A conscientious journal keeper is really the natural historian of his own life. His model is the amateur naturalists of the
eighteenth and nineteenth centuries, writers like Gilbert White or collectors like George Eliot’s Camden Farebrother. It often
seems as though science in this century has little use anymore for amateur observers of that kind, that science has grown
too institutional, too complex, to value the private watcher of a small patch of ground. It seems that way too when it comes
to our own lives. They’re cross-referenced, indexed, cataloged, and witnessed by the public and private institutions whose
job is to tabulate and codify us. Even the task of introspection has been jobbed out to the professionals. A personal journal
in our time comes to seem less like a valuable cache of perceptions than a naive recitation of symptoms that the writer lacks
the authority to analyze.

But many of the great journals—I think especially of Samuel Pepys’s seventeenth-century diary and James Boswell’s eighteenth-century
journal—are not marked by self-consciousness. They’re marked by a dogged absence of self-consciousness, a willingness to suspend
judgment of the journal itself, if not of its author, in order to keep the enterprise going. The value of Pepys’s diary and
Boswell’s journal is the world they depict and only incidentally the depiction of their authors. Their journals weren’t read
until long after the authors had died. Both men wrote for an audience of one. Judging by my own fragmentary journals, that’s
one too many. It’s not enough that I should be dead before anyone else reads them. I should be dead before I reread them myself.

So at the beginning of this new year, I’ll try to hold out against more journal making. There are lots of good reasons to
do so. I have enough to write as it is, and I know enough about writing now to distrust the words that seem to flow onto the
page. A journal always conceals vastly more than it reveals. It’s a poor substitute for memory, and memory is what I would
like to nourish.

But if I do give in, this is what I have in mind. I want to count the crows in the field every afternoon. I want to record
the temperatures, high and low, every day and measure the rain and snow. If a flock of turkeys walks into the barnyard, I
want to mention the fact. If one of the horses throws a shoe, I want to say so, in writing, before I call the farrier; and
I’d like to be able to tell from my journal just how many bales of hay I have squirreled away in the barn. It’s no longer
the writer in me that wants to keep a journal. It’s the farmer—or rather the son and nephew and grandson of farmers.

A
ll of the days with eves before them are behind us now for another year. The grand themes—rebirth and genial carnality—have
come and gone like a chinook wind, bringing a familiar end-of-year thaw to body and spirit. Now the everyday returns and with
it the ordinary kind of week in which Friday doesn’t turn into Sunday—and Saturday into Sunday—as it has for two weeks running.
It’s time for a week in which each morning throws off a magnetic field all its own, when it’s no trick telling Tuesday from
Wednesday just by the sound of the alarm clock or the mood of your spouse.

With the everyday, winter comes at last to the new year. In the country it isn’t necessarily snowfall or the sudden drop in
temperature that marks the return of winter. It’s the sound of the plow-guy—unless you happen to
be
the plow-guy—clearing the driveway well after dark, when the dogs are already asleep, too tired from an afternoon of running
around a snowy field to rise and bark at the scraping and banging outside. In the time it takes to wonder what the racket
is, I remember. It was last winter’s sound, and now it’s this winter’s too. It seems surprising that the plow-guy even recalls
where I live and that such a flimsy agreement—a couple of words and a nod over a rolled-down pickup window—could have such
presumptive force. But that’s the nature of the country, where lifelong service contracts are formed in an instant and attach
to the property, not the person, as newcomers discover to their interest. Getting out of those contracts is like getting out
of winter. Better just to move.

Winter’s own presumptive force made itself plain recently, with rain upon snow followed by snow upon ice late into the darkness.
The next morning my footsteps to the barn through the slush the night before had been preserved with remarkable sharpness—each
one a life mask of my boot sole, the splash frozen in midair as if it were a Harold Edgerton photo. In the sunshine, snow
slid off the metal barn roof with a hiss, and the horses skittered out from the run-in shed, taking pleasure as they always
do in a momentary fright. In a single night they’ve learned how to pick their way over ice again. The roads are suddenly full
of the overtentative and the overbold, for at night the cold, clean blacktop looks like hardpacked snow, and sometimes it
actually is. Other seasons come abruptly but ask so little when they do. Winter is the only one that has to be relearned.

The Black Book by Orhan Pamuk
Mil días en la Toscana by Marlena de Blasi
Miss Julia Meets Her Match by Ross, Ann B.
More Than You Know by Jennifer Gracen
The Kiss Off by Sarah Billington
Poughkeepsie Begins (The Poughkeepsie Brotherhood #0.5) by Debra Anastasia
The Last Motel by McBean, Brett
The Poisonwood Bible by Barbara Kingsolver
Mistress of the Monarchy by Alison Weir
Love Disguised by Lisa Klein