In Senor Traite’s room there was also a desiccated frog hanging from a thread, which he waggishly called
“La meva pubilla”
(my pupil), and at other times, “my dancer.” He was fond of saying:

“With her all I have to do to know what the weather is going to be is to look at her.”

I would find this frog each day stiffly contracted in a different pose. It gave me an indefinable sickish feeling which nevertheless did not prevent an irresistible attraction, for it was almost impossible for me to detach my eyes from the horrid little thing. Besides the giant rosary, the explosive Mephistopheles and the dried frog there was a large quantity of objects which were probably medical paraphernalia, whose unknown use tormented me by the scabrous ambiguity of their explicit shapes. But over all this reigned the irresistible glamor of a large square box which was the central object of all my ecstasies. It was a kind of optical theatre, which provided me with the greatest measure of illusion of my childhood. I have never been able to determine or reconstruct in my mind exactly what it was like. As I remember it one saw everything as if at the bottom of and through a very limpid and stereoscopic water, which became successively and continually colored with the most varied iridescences. The pictures themselves were edged and dotted with colored holes lighted from behind and were transformed one into another in an incomprehensible way that could be compared only to the metamorphoses of the so-called “hypnagogic” images which appear to us in the state of “half-slumber.” It was in this marvelous theatre of Senor Traite that I saw the images which were to stir me most deeply, for the rest of my life; the image of a little Russian girl especially, which I instantly adored, became engraved with the corrosive weight proper to nitric acid in each of the formative moulds of my child’s flesh and soul, in an integral way, from the limpid surface of the crystalline lenses of my pupils and my libido to the most delicate murmur of the “chrysalid caress” sleeping hidden behind the silky protection of the pink and ridged skin of my tender fingertips. The Russian girl appeared to me swathed in white furs and deeply ensconced in a sled, pursued by wolves with phosphorescent eyes. This girl would look at me fixedly and her expression, awe-inspiringly proud, oppressed my heart; her little nostrils were as lively as her glance, which gave her something of the wild look of a small forest animal. This extreme vivacity provided a moving contrast to the infinite sweetness and serenity conveyed by an oval face and a combination of features as miraculously harmonious as those of a Madonna of Raphael. Was it Gala? I am certain it was. 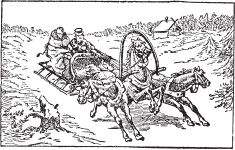 In Senor Traite’s theatre I also saw a whole succession of views of Russia and I would remain startled before the mirage of those dazzling cupolas and ermine landscapes in which my eyes “heard,” so to speak, beneath each snowflake, the crackling of all the precious fires of the Orient. The visions of that white and distant country corresponded exactly to my pathological desire for the “absolutely extraordinary,” progressively assuming reality and weight to the detriment of those streets of Figueras which, on the other hand, each day lost a little more of their everyday corporeality.

Moreover, as on each occasion in my life when I have wanted something with passionate persistence, an obscure but intense expectation that hovered in my consciousness was materialized: it snowed. It was the first time I witnessed this phenomenon. When I awoke, Figueras and the whole countryside appeared before me covered by that ideal shroud, under which everyday reality was indeed buried, and it was as though this were due to the sole and unique autocratic magic of my will. I felt not the slightest astonishment, so intently had I expected and imagined this transformation. But from this moment a calm ecstacy took hold of me, and I lived the moving and extraordinary events which are to follow in a kind of waking dream that was almost continual.

Toward the middle of the morning it stopped snowing. I left the clouded window-pane, against which I had kept my face obstinately flattened during this whole time, to go walking with my mother and sister. Each crunching step in the snow appeared to me to be a miracle, though I was a little angry over the traffic, which continued as usual and which had already stained the whiteness of the streets—I should have liked no one to have the right to touch it except myself.

As we approached the outskirts of town the whiteness became absolute; we went through a small forest and soon reached a glade. I stood motionless before that immaculate expanse. But I had stopped especially because of a small, round brown object that lay exactly in the centre of this expanse of snow. It was a small seed-ball which had fallen there from a plane tree. The outer envelope of this ball had been partly split open and from where I saw it I clearly distinguished a bit of the kind of yellow down which is inside. Suddenly the sun broke through the clouds and everything was illuminated with a maximum of intensity. My eyes remained riveted to the seed-ball which now cast a precise blue shadow on the snow. Its yellow down, especially, seemed to have caught fire and to have become as if “alive.” The sudden dazzle mingled with a great emotion filled my eyes with tears. I went over and with infinitely gentle care picked up the little bruised ball. I kissed it in the broken place with the tenderness one owes to something animate, suffering and cherished. I wrapped it in my handkerchief and said to my sister:

“I have found a dwarf monkey, but I won’t show it to you!”

I could feel it moving inside my handkerchief! A sentiment stronger than all else guided me toward a single spot: “the Discovered Fountain.”
I had to insist with the unflinching exactingness of my tyrannical obstinacy to force the direction of our walk toward this spot. When we had almost reached it (the Discovered Fountain was just to one side; one had to go down several steps and then turn to the right), my mother, meeting some friends, said to me:

“Run along and play for a while. Go as far as the fountain, but be careful not to get hurt. I’ll wait for you here.”

The friends made room for my mother on a stone bench, which just a while ago had been covered with snow and was still all damp. I looked with ferocious contempt at these friends who dared to offer “that” to my mother, for whom I could imagine only the most exceptionally selected comfort, and I found a great satisfaction in the fact that my mother did not sit down, but remained standing on the pretext that she would be able to watch me more easily. I went down the steps and turned to the right: there she was!—the little Russian girl I had seen inside Senor Traite’s magic theatre. I shall call her Galuchka, which is the diminutive of my wife’s name, and this because of the belief so deeply rooted in my mind that the same feminine image has recurred in the course of my whole love-life, so that this image having, so to speak, never left me, already nourished my false and my true memories. Galuchka was sitting there, facing me, on a stone bench, in the same attitude as in the sled scene, and she seemed to have been looking at me for a long time. The moment I perceived her I instinctively drew back; my heart was so agitated that I thought it would jump out of my mouth. The little seed-ball, too, began to pulsate in my hand, strengthening my feeling that it was alive.

My mother, seeing me come back and noticing my perturbation, exclaimed:

“What is there at the fountain?” And she explained to her friends:

“See how capricious he is: The whole day he’s done nothing but ask to come to the fountain, and now that we’ve reached it he doesn’t want to go there any more.”

I said I had forgotten my handkerchief, and seeing my mother look at the one I was carrying in my hand I added:

“I’m using this one to wrap up my monkey. I need one to blow my nose.”

My mother blew my nose with her handkerchief and I went off again. This time I tried to go down to the fountain from the opposite direction, so as to be able to see Galuchka from behind without being seen myself. In order to do this I had to climb over a tangled clump of prickly shrubs. My mother commented, as usual:

“He’s always got to do just the opposite of everyone else—going down the steps was too easy for him!”

On all fours I scrambled over the top of the clump, and there I did in fact see Galuchka from behind. This reassured me as to her reality, for I was almost convinced that she would no longer be there on my return. The dorsal fixity of her attitude paralyzed me anew, but this time I did not back away—I kneeled in the snow both to affirm my decision to remain and in order to hide myself behind the trunk of an old olive tree; my movement coincided with that of a man leaning over to fill a water jug at the fountain. While the sound of the water re-echoed within the jug I had an “astonishing” impression:
5
it seemed to me that I lived an “infinite time,” during which every kind of precise thought or emotion left me. I became like the Biblical statue of salt. But though my mind was as if absent, I nevertheless saw and heard with an acuteness that I have never again experienced. Galuchka’s silhouette against the background of snow had contours as curiously and furiously precise as a key hole. I could hear even the faintest syllable of the conversation between my mother and her friends, in spite of the distance that separated me from them.

At the precise moment when the full jug began to overflow my strange enchantment instantaneously came to an end. Time, as if suspended until then, resumed its habitual prerogatives and its normal limits. I got up again, as if cured of all timidity. My knees were completely benumbed from their long contact with the snow; and I felt a new sensation as of “lightness,” without knowing whether it came from the emotion of being in love or from my benumbed knees. A precise idea assailed me: I was going to go up and kiss Galuchka on the back of her head with all my might. But instead of realizing this desire I quickly drew a small knife from my pocket, deciding to carry out another idea instead of that of the kiss—the idea which I had already caressed in
the course of my walk: with the pocket knife I would completely peel the seed-ball so that it would be all downy, and then I would make a present of it to Galuchka.