1
Fetish: a tangible, objective and symbolic materialization of desire; by sublimation, a wish, a “prayer.”

4
A military intelligence committee that functioned during the terror in Barcelona.

6
To Tristan Bernard is attributed the witty remark, on the day of occupation of Paris: “We spent the whole period of the war exclaiming, about the Germans, ‘We’ll get them! We’ll get them!’ Well, we’ve got them!”

7
It has been demonstrated that one does not defend the country with Maginot lines constructed with false material and false politics, undermined by revolution. But the French soldier who comes from the concentration camp and who weeps already becomes once more a “Catholic stone,” a stone of the Cathedral of Chartres, a tradition and a force. 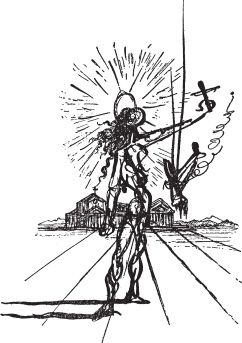 I am thirty-seven years old. It is July 3oth, 1941, the day I promised my publisher I would finish this manuscript.

I am completely naked and alone in my room at Hampton Manor. I approach the wardrobe mirror and look at myself; my hair is still black as ebony, my feet have not yet known the degrading stigma of a single corn; my body exactly resembles that of my adolescence, except for my stomach which has grown bigger. I am not on the eve of a voyage to China, nor am I about to get a divorce; neither am I thinking of committing suicide, nor of jumping over a cliff clutching the warm placenta of a silk parachute to attempt to be reborn; I have no desire to fight a duel with anyone or with anything; I want only two things: first, to love Gala, my wife; and second, that other inescapable thing, so difficult and so little desired–to grow old.

And you too, Europe, may I find you on my return a little more aged by all “that.” As a child I was wicked, I grew up under the shadow of evil, and I still continue to cause suffering. But since a year ago I know that I have begun to love the being who has been married to me for seven years; and I am beginning to love her as the Catholic, Apostolic and Roman Church demands, according to its conception of love. Catholic love, said Unamuno, is, “If your wife has a pain in her left leg, you shall feel that same pain in your left leg.”

I have just finished writing this long book of the secrets of my life, for this life that I have lived, this alone, gives me authority to be heard. And I want to be heard. I am the most representative incarnation of postwar Europe; I have lived all its adventures, all its experiments, all its dramas. As a protagonist of the surrealist revolution I have known from day to day the slightest intellectual incidents and repercussions in the practical evolution of dialetical materialism and of the pseudo-philosophical doctrines based on the myths of blood and race of National-Socialism; I
have long studied theology. And in each of the ideological short-cuts which my brain had to take so as always to be the first I have had to pay dear, with the black coin of my sweat and passion. But if I have participated, with the lucid fanaticism characteristic of the Spaniard that I am, in all the speculative searches, even the most contradictory, I have never in my life been willing, on the other hand, to belong to any political party whatsoever. And how should I be willing to do so now, today, when politics is already in the process of being devoured by religion?

Since 1929 I have ceaselessly studied the processes, the discoveries of the special sciences of the last hundred years. If it has not been possible for me to explore all corners of these because of their monstrous specialization, I have understood their meaning as well as the best! One thing is certain: nothing, absolutely nothing, in the philosophic, esthetic, morphological, biological or moral discoveries of our epoch denies religion. On the contrary, the architecture of the temple of the special sciences has all its windows open to heaven.

Heaven is what I have been seeking all along and through the density of confused and demoniac flesh of my life–heaven! Alas for him who has not yet understood that! The first time I saw a woman’s depilated armpit I was seeking heaven. When with my crutch I stirred the putrefied and worm-eaten mass of my dead hedgehog, it was heaven I was seeking. When from the summit of the Muli de la Torre I looked far down into the black emptiness, I was also and still seeking heaven!

Gala, you are reality!

At this moment I do not yet have faith, and I fear I shall die without heaven.

Mystery of the Dark Tower by Evelyn Coleman
Camp Alien by Pamela F. Service
How to Destroy the Universe by Paul Parsons
Martial Law 1: Patriotic Treason by Christopher Nuttall
50 by Avery Corman
A Man's Heart by Lori Copeland
When a Rake Falls by Sally Orr
Suni's Gift by Anne Rainey
Unleashed by Shadows (By Moonlight Book 10) by Nancy Gideon
A Fatal Fleece by Sally Goldenbaum