Read The Shadow and the Night: Glenncailty Castle, Book 3 Online

The Shadow and the Night: Glenncailty Castle, Book 3 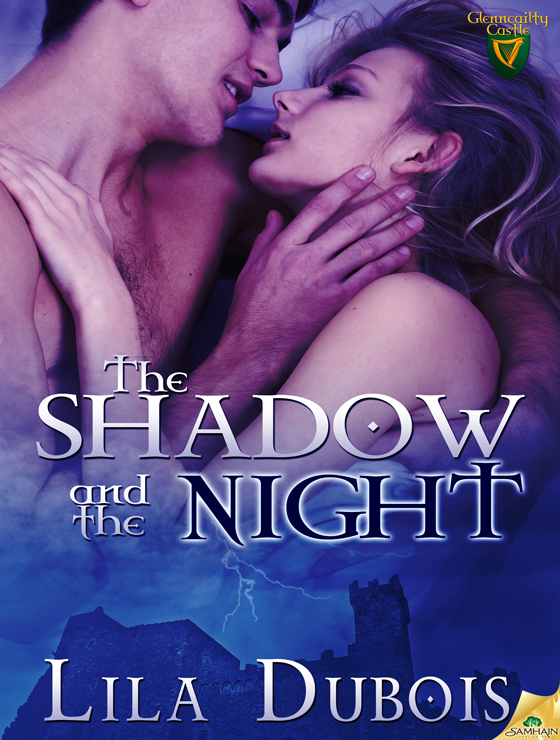 For Mack, even though she’s a mass-murdering psychopath.

For Amy, who agreed to become a pseudo expert on forensic anthropology to fact check my science. Any mistakes are definitely her fault. I mean, like 100% her bad. I never make mistakes.

For Kristi Alford-Metcalf, who was the first person besides me to love Glenncailty Castle and its mysteries. Thank you. You made me want to tell a good story.

For Farm Boy, who doesn’t mind that I exploited his native land for the sake of a story, and who tirelessly translated text and dialogue into both French and Irish. He also didn’t freak out when in a first draft some of the ghosts had the same names as his siblings. I assure you it’s due to laziness when writing, not a latent desire to murder any members of his family.

For all my readers—thank you. I hope that you enjoy Tristan and Melissa’s story.

Biting her lip, Melissa pushed through the pain. Her biceps strained, her elbow creaked and her fingers shook. With a little hiss of frustration, she dropped the soup can. The innocuous can hit the floor and rolled under the vanity in the little guest room of her grandmother’s house.

Trembling from the effort, Melissa gingerly sat back on the bed. Unfortunately, that put her level with her own reflection in the mirror. Her face was flushed and there were tears in her eyes. Irritated with herself, she wiped them away with her right hand while her left lay limp on the bed.

She was wearing a thin sleeveless undershirt, and the mirror showed the long, jagged scars that started midway down her upper left arm, coated her elbow and stopped mid-forearm. Besides the scars, her arm looked skinny and weak, the muscles atrophied after months with her arm braced to her side. The physical therapy was helping, though it was humiliating that she found a simple soup can so hard to lift.

Her grandmother’s voice snapped her from her brown study. She grabbed an embroidered hip-length jacket she’d bought in China and pulled it on. The long sleeves hid her scars. She carefully bent her left arm, feeling her elbow creak as she slid the knotted buttons through the loops. Her mangled arm didn’t bother her grandmother, but Melissa was more comfortable with it covered up.

Bouncing to her feet she left the little room on the second floor of the terraced Dublin house and bounded down the stairs, taking them two at a time just to prove her legs still worked. Granny waited in the wood-paneled hallway at the bottom.

The older woman reached out for Melissa’s arm, but pulled her hand back. “Follow me.”

A lump forming in her stomach, Melissa shuffled behind her grandmother through the small, twisting halls of the two-hundred-year-old house until they reached the kitchen. It had been remodeled and enlarged in the ’70s, and there was just enough space for a table. Her grandmother shooed her into a seat, then took one herself.

“I need to ask you a question, and I’m very serious about this.”

“Very well,” Melissa said, no idea what this could be about. Up until the time that she went away to university, Melissa had spent almost every summer in Dublin with her grandmother and loved her ferociously. Returning to London each August had been heartbreaking, and for weeks she’d wander her parent’s house with an affected Irish accent quite unlike her own public-school British one. She’d finally gotten a chance to stay here more permanently when she’d come to live with her grandmother to attend University College Dublin, where she’d gotten a degree in Archaeology before the discovery of the bog bodies had shifted her interest to Forensic Anthropology.

“A man from the
Garda Síochána
called, and he was looking for you.”

“That’s what I need to know.” Bracing her elbows on the table, Bridget Ferguson leaned forward. “Did you steal a body, or maybe just some bones? Something you thought was interesting to study but might actually be the bones of a royal family somewhere, bones that would prove that the current rulers are impostors?” The older woman’s gaze was hard and focused.

“Wha… What bones? What ruling family?” Melissa stared at her grandmother in total confusion. They had the same hazel eyes, but Melissa had gotten her father’s fair hair, not the black of her mother and grandmother—though she’d seen a dye box in the bathroom, confirming her suspicion that her grandmother’s hair was no longer naturally dark.

“Or maybe you found something, a piece of jewelry, a letter, a trinket of some kind.”

Melissa narrowed her eyes. “Granny, have you been watching those crime shows again?”

“Well, of course I have. I have to know what my favorite granddaughter is doing while she’s running around all corners of Christendom.”

Melissa’s lips twitched. “Granny, I’ve told you, I’m not like the lady on the TV show. I don’t solve crimes. They usually know who did it before I get there.”

“And you’re sure that you didn’t accidentally bring back some mysterious bones?”

She looked so hopeful that Melissa hated to say, “No.”

“Ah, well then.” Her grandmother sat back with a little sigh of disappointment.

“Did the police actually call?”

“As if I’d make up something like that,” she humphed. “They did call, and they said something about some bones.”

As a forensic anthropologist Melissa wasn’t like the character on the crime dramas her grandma watched, but she did travel all over the world looking for human remains. She’d gone out with the Central Identification Laboratory in Hawaii, called CILHI, to help identify remains from the Korean War and Vietnam conflict, spent some time in South America helping to sort through the warehouses of remains that the state-run laboratories were holding but didn’t have time to work with, and then most recently had been in Bosnia and Africa to help process mass graves.

She rarely solved crimes. Usually she was the one confirming for the authorities that a crime had been committed.

“Pardon me, the Guard, did they give you a number I could call?”

“The detective sergeant is coming around in a few minutes, so we’d best prepare for company. Do you know where the nice teapot is?”

Melissa took the pretty china teapot out of one of the high glass-fronted cabinets with her right hand. “If you thought I had dangerous skeletal remains in my luggage, why did you invite the Guard for tea?”

“And how could I not? It would be highly suspicious if I didn’t. Highly. But don’t worry, I had an escape plan for you.”

“You did?” Melissa put the pot on the table and grabbed a tray.

“Dr. Heavey?” The detective sergeant wiped his feet before crossing the threshold into the house. He was a heavy-set man with a pronounced brow ridge and high cheekbones in an overall flat face. He had the fair coloring common in Ireland, but his eyes were brown. Melissa stared at him. Though he probably looked normal to anyone else, his face intrigued her.

“You have a very vertical chin and no maxillary prognathism, but fair coloring.” Melissa examined each feature, mentally stripping away flesh to reveal bone. “You have a grandparent who is Asian.”

“Uh, well, no. My grandmother was Indian.”

“As I said, Asian. You have a few distinctly Mongoloid features.”

There was a loud “AHEM” from the front room. Melissa jumped and remembered her manners.

“I’m Dr. Melissa Heavey. How do you do, Sergeant?”

“I’m well, thank you for having me.” He was looking at her oddly and speaking with deliberate care. “The name’s Detective Sergeant Oren.”

“And please, call me Melissa.” She added her best, most normal, smile.

Melissa led the sergeant into the formal front room. She’d only been in it a handful of times, as it was reserved for special guests. A detective sergeant come to talk about bones was certainly on that list. Melissa had changed from her jeans and Chinese jacket into black trousers and a green sweater. Her grandmother had changed too, into brown wool slacks, a cream sweater and her good gold jewelry.

“Detective Sergeant Oren, this is my grandmother, Bridget Ferguson.”

Her grandmother nodded as if she were the Queen welcoming someone to her palace. Melissa took a seat by her, and after a quick look around, the detective sergeant chose the chair across from them.

Her grandmother poured the tea, adding milk and sugar to specification and passing cups.

Melissa bit down on her curiosity. Beside her, she could feel her grandmother vibrating with the need to know.

She’d grown up hearing “you need to know this” or “you’ve no need to know that”. That need to know, which was clearly a family trait, had driven her academic interests, leading to a career where she addressed other people’s need to know—“I need to know if my brother/father/son is there, if he’s dead.”

“You mentioned something to my grandmother about bones?” Melissa asked after they’d all taken a sip of tea.

“Ah yes, you see, we have a bit of an unusual case, and we were hoping you might help us.”

Melissa opened her mouth, but her grandmother beat her to it. “My granddaughter is here resting and recuperating after nearly being killed doing important humanitarian work.”

Melissa wanted to both hug and shush the older woman.

“May I ask who recommended me?” Melissa said.

“Of course, I’ve met him several times. Did he need a consult?”

“No, and there’s our problem. Based on the photos, he thinks the bodies are at least seventy years old, so even if he had the time or money, he might not handle the case.”

“He looked at photos?” Photos were rarely enough to go on with bones that hadn’t been cleaned.

“We found bones in a hotel out in the countryside. A place called Glenncailty.”

“Valley of the Lost,” Bridget translated.

“It’s more than my department can handle, and we’ve plenty of things that need investigation. I was hoping Dublin could help, but they too have more urgent matters.”

“What could be more important than laying someone to rest?” Bridget humphed. “It seems the Dublin
Gardaí
don’t have their priorities straight.”

Before Detective Sergeant Oren could say anything, Melissa spoke up. “Very few governments have the kind of forensic manpower it takes to sort through human remains, and people are always surprised at how often a body too old or too decomposed for the pathologist to work with turns up.” She turned back to the detective. “But why isn’t the National Museum handling this? If the bones are old, they should go to the museum.”

“The museum has been hurt by the budget. They said they might be able to send someone out in a few months.”

If the museum planned to examine the bones, Melissa wasn’t sure why Oren was here. “I spent some time at the National Museum and I’m sure they’ll do a wonderful job.”

The detective sergeant shifted, setting his cup down. “I didn’t realize you were on holidays. I shouldn’t have bothered you.”

Bridget clicked her tongue. “You don’t want to wait for the museum people.” She set her cup down and rubbed her hands together. “There’s something special about these, isn’t there? Something that means it can’t wait.”

He looked uncomfortable and nodded. “Yes, ma’am. The owner of the place where they were found has asked that this be taken care of right away. He offered to pay for the investigation himself.”