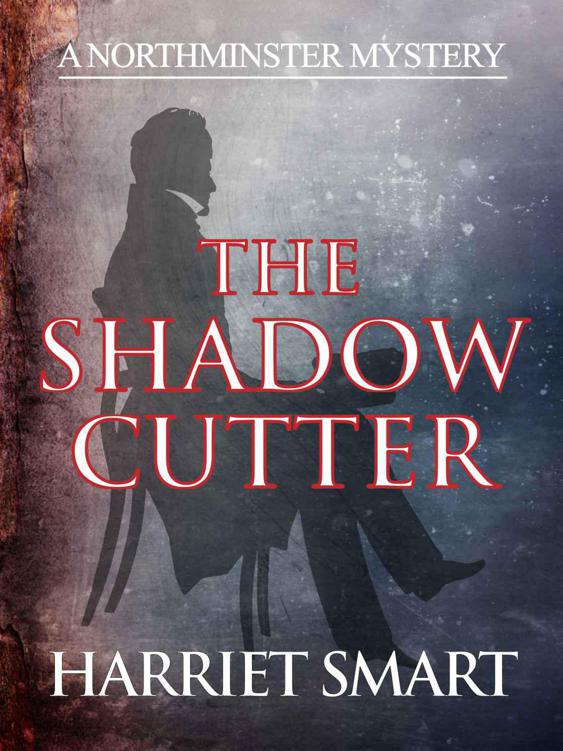 This ebook is licensed for your personal enjoyment only. This ebook may not be re-sold or given away to other people. If you would like to share this book with another person, please purchase an additional copy for each recipient. If you’re reading this book and did not purchase it, or it was not purchased for your use only, then please visit
www.harrietsmart.com
and purchase your own copy. Thank you for respecting the hard work of this author.

The Daughters of Blane

“Mr Bryce is going to open his fencing room in Northminster,” said Major Vernon as they climbed the stairs. “There will be more business there for him. And he is going to give the men cutlass training.”

“I had better lay in a stock of sutures, then,” said Felix, not entirely confident that the men of the Northminster Constabulary could be trained in the finer points of swordsmanship without a certain amount of damage.

It was not yet seven in the morning and Felix could not help yawning. It was typical of Major Vernon to insist on rising even earlier on holiday than he usually did. That morning, he had goaded Felix into accompanying him to his fencing lesson, hoping to persuade him to take it up. Felix, feeling languid from the heat, did not feel inclined.

The fencing master, Bryce, came out to greet them with an enthusiasm which matched that of Major Vernon. He was a Scotsman and not young – he had snow-white hair and a leathery complexion, but he had a sprightly air about him, as if he never grew tired. He was, as Major Vernon said as he presented him to Felix, a very fine advertisement for his art.

While the Major changed into his kit, Mr Bryce took the opportunity to look Felix over.

“You are right, sir, the gentleman does have the physique for it,” he said to Major Vernon. “And you never took lessons, Mr Carswell?”

“I took one or two when I was first in Edinburgh,” said Felix, “but it got in the way of my work. And I was extremely clumsy.”

“A piece of glass and a madwoman.”

“Then perhaps you do need to learn to defend yourself,” said Bryce.

“Steady, Mr Bryce,” said Major Vernon, buttoning up his chamois leather jacket. “I want you to persuade him, not to drive him away.”

“There is nothing the young ladies like better than a man who can handle a sword,” Bryce went on. “And it will help you with your dancing sir, make you nimble and light on your feet.” Bryce executed a waltz step or two to demonstrate and then finished with a bow.

“I don’t have any plans to go dancing,” said Felix, wandering over to the open window in hope of finding a little air. That Major Vernon could think of exerting himself in a leather coat in this temperature astonished him. He did much not like hot weather and the air in Stanegate struck him as enervating. He had come from Northminster the day before, hoping for some relief from the heat and stench of the city. Stanegate did not smell so foul, but there was no refreshment in the air.

“I can’t persuade, you sir? I am at your disposal,” said Bryce. “There is another gentleman here who is anxious to practice the epée, Major Vernon, and I told him I was expecting an accomplished opponent.”

“I would hardly say that,” Major Vernon said, picking up his gloves.

“He’s a Spanish gentleman from the West Indies, would you believe, sir? From some island, I can’t remember the name, Santa something or other – I’m not sure what he said. We do get all manner of people these days, in Stanegate.”

“Heavens,” said Major Vernon. “I suspect he will slaughter me.”

“He’s a young man,” said Bryce, “and he does has a certain style about him, but I think you will be more than a match for him. Shall we?” He opened the double doors and ushered them through into a thirty-foot room of lofty proportions. It was large enough to have held a score of swordsmen, all parrying and thrusting. As it was, Bryce had only one pupil, who stood at the far end fencing an invisible opponent.

He stopped as they approached and bowed elaborately.

“Would you care for a bout, sir?” he said, addressing the Major slowly and carefully. He had a thick Spanish accent. “I can see by your bearing that you are a true devotee of the sword.”

Major Vernon returned the bow but with much less flamboyance.

“At one time, perhaps, but you will have to forgive me if you find me a little rusty, Mr...?”

“Oh, a hundred apologies, forgive me sir. Allow me to present myself. I am Don Xavier Perez Martinez.” He made another elaborate bow.

“Giles Vernon at your service,” said Major Vernon. “I will fight you, of course, sir, but you may be disappointed with the sport. Whatever Mr Bryce may have told you –”

“Ah, yes, I understand – you Englishmen are masters of the feint,” Martinez said.

“This will be no feint, I assure you!” said Major Vernon. “Epée?”

Felix went and sat down on one of the benches by the wall. While the men fixed on their masks and took up the weapons, he tried to recall the names of the islands of the West Indies that were Spanish colonies and failed entirely. His mother had attempted to cram a little geography into him as a child, but clearly without much success.

Major Vernon and Don Xavier took up their positions and after saluting each other with flourishes of the sword, began their first bout.

Felix knew little of the complexities of what he was witnessing, but it struck him at once that Don Xavier was not holding back. He went straight on the attack, with notable aggression, as if he meant real harm. For all the Major was doing his best to defend his position, he was clearly very soon under pressure. In a matter of moments, Don Xavier had actually knocked the sword from the Major’s hand. It went clattering to the floor, skittering across the boards noisily.

Major Vernon threw up his hands, clearly startled by this very speedy defeat.

“I told you I was not a good enough opponent,” he said, reaching to retrieve his sword. “You are most accomplished! Congratulations! Again?”

Don Xavier did not reply. Felix noticed his chest rising and falling as he recovered his breath. It seemed he was quite winded by his victory, and then he began to cough in a fashion that alarmed Felix at once. It was a severe bronchial spasm which caused him to turn away, bending double as he did so, overcome entirely by it. His sword went crashing to the floor and he buckled at the knees.

Felix leapt from the bench and threw himself down beside him, scrabbling to get the fencing mask clear of his face and hold him into a position so that he would not choke. A mixture of sputum and blood was frothing from his mouth, and his whole frame was shaking from the violence of his coughing. Felix’s handkerchief was soon clogged with the expectorations: a mass of greyish white globules, streaked with blood and stinking ominously of fresh plaster.

Major Vernon, who had crouched down to help support him, offered his own handkerchief, leaving Felix staring down at the evidence. He reached for Martinez’s wrist and took his pulse. It was racing. The signs were not good: chronic phthisis, if he was not mistaken.

“Where is he staying?” Major Vernon asked the fencing master.

“At the White Horse, I think.”

“Do you have towels and water?” said Felix, wishing he had his medical bag with him.

“Of course, right away,” Bryce said and hurried off.

The coughing subsided and Don Xavier stared at Felix, with glassy, sunken eyes, his forehead damp with fever. He opened his mouth as if to speak.

“No, quiet for now, if you please, sir,” said Felix. “I am a surgeon, I will do all I can for you, and then we will find your own attendant.”

Don Xavier shook his head, as if were the most painful and exhausting thing in the world.

“I... I....” he rasped and then gave up, his head sinking back against Major Vernon.

“All in good time,” Felix said, but wondered how much time he had.

The White Horse was not one of the most expensive or fashionable hotels in Stanegate. It lay in the oldest part of the town, hard up against the graveyard of the Parish Church. The grudging landlady showed them up to his room, which was inconveniently on the third floor.

“Shouldn’t you have taken him to the infirmary?” she said, as they got him onto his bed.

Felix did not trouble himself to answer her. Martinez was gasping for breath and needed his full attention. The stairs had been a desperate struggle for him, although he had Carswell and Major Vernon supporting him. They had been obliged to carry him up the last flight. He had, of course, considered taking the man to the Infirmary, but summer was always a dangerous place in a public hospital, especially in a town full of visiting invalids. The chance of catching a passing fever would be considerable. With Martinez’s already weakened constitution, it would be akin to negligence to have taken him there.

But the room at the White Horse was, in its way, equally unpromising: a long, narrow slot, with a dormer window at one end. A miserable room at the best of times, and not at all suitable for a invalid.

“When did he arrive?” Major Vernon asked the landlady. Martinez appeared to have only half unpacked. His travelling trunk lay open at the end of the room but he had taken the trouble to set up on the table by the bed a black crucifix with a white ivory figure of Christ, a string of rosary beads and an image of the Virgin Mary.

“Day before last,” she said.

“No servant with him?” Major Vernon said.

“No, sir. We don’t usually take that sort here.”

“And he didn’t call for a doctor?” said Felix.

“Not that I know of. I shouldn’t have let him have the room if I’d known he was in this state. And he’s papist –” Felix heard the landlady mutter when Major Vernon sent her for water, brandy and more pillows

“Well, I am sorry for that, Don Xavier,” Major Vernon said, when she had gone. “A very poor specimen of our national hospitality.”

Martinez made a gesture that suggested he was not offended. He was beyond being offended, Felix supposed, the poor fellow.

“Come, sir, let’s get you more comfortable,” Felix said, and together with the Major they got him out of his clothes. He was wretched with sweat, and the closeness of the room did not help. What had possessed him to go fencing that morning, Felix thought, as he sponged him down, attempting to reduce the fever. His symptoms were of a nature and severity that they would have presented themselves before, and with disabling consequences. He would know exactly what was wrong with him.