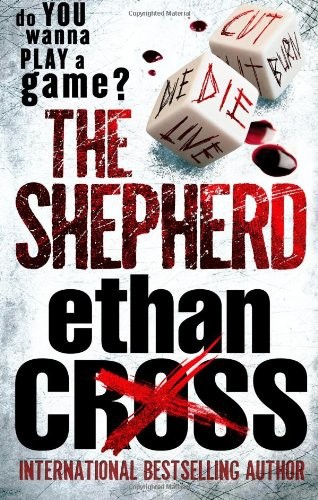 Praise for
The Shepherd
:

“A fast paced, all too real thriller, with a villain right out of James Patterson and ‘Criminal Minds.’”
– Andrew Gross, #1
New York Times
bestselling author of
Reckless
and
Don’t Look Twice

“
The Shepherd
is an intense novel that will have you locking your windows and doors, installing a safe room and taking Ambien so you can sleep through the night after finishing. Ethan Cross opens up the mind of a serial killer, exposes you to it, and leaves you with years of therapy bills. But this thrill-ride is worth every penny.”
– Jeremy Robinson, author of
Pulse
and
Instinct

“
The Shepherd
is a superbly crafted thriller skillfully delving into the twisted mind of a psychopath and the tormented soul of the man destined to bring him down. Ethan Cross weaves a tale so chilling, I was afraid to turn out the lights. Highly recommended!”
– D.B. Henson, Amazon bestselling author of
Deed to Death

“In
The Shepherd
, Ethan Cross has penned a taut, violent and relentless nightmare designed to prey on a reader’s darkest fears. Not for the faint of heart!”
– A.J. Hartley, Bestselling author of
What Time Devours
and
Act of Will

“
The Shepherd
is a nonstop suspense novel with great twists, great drama, and an ending that will knock you on the floor.”
– Lou Aronica,
New York Times
bestselling author

This is a work of fiction. Names, characters, places, and incidents either are the product of the author’s imagination or are used fictitiously. Any resemblance to actual events, locales, organizations, or persons living or dead, is entirely coincidental and beyond the intent of either the author or the publisher.

All rights reserved, which includes the right to reproduce this book or portions thereof in any form whatsoever except as provided by U.S. Copyright Law. For information, address The Fiction Studio.

For my beautiful wife, Gina...

I want to start off by saying that an enormous number of people have helped and supported me with this project and in my life in general—way too many to list here. The most notable of these is my wonderful wife, Gina, who put up with all my eccentricities and supported me as I reached for this dream. I also want to thank the rest of my family for all of their support and encouragement, especially those who served as my early readers and copy-editors (Yes, Teresa, I’m listing you by name, as I promised).

But there is also a large group within the publishing industry without whom this project would not have been possible. If I have any success with this novel, it will be due largely to the efforts of my editor, publisher, and friend, Lou Aronica, who helped take my work to the next level. Thank you, Lou, for your patience and wisdom. Overwhelming gratitude is also due to my agents, Danny Baror and Heather Baror—for taking a chance on an unknown writer—and to my friend and business partner, Stan Tremblay—for helping to bring the world of
The Shepherd
to the masses. Big thanks to my copy-editor, Steven Manchester, who helped to add that extra layer of polish onto the book. I also want to thank my fellow authors who have helped and encouraged me on my writer’s journey: Jeremy Robinson, Andrew Gross, AJ Hartley, James Scott Bell, Karen Dionne, James Rollins, Travis Thrasher, Andrew Peterson, Steven James, DB Henson, Jeremy Burns, Brian Wheeler, and many more. Also, many thanks to the International Thriller Writers. Without the ITW and their collective instruction and wisdom, I would not be anywhere close to accomplishing my dream right now.

Many thanks are also due to the men and women of law enforcement in general and specifically to those who aided in my research, including the Colorado State Patrol, Tom Kearns, JR Johnson, and ATF Supervisory Special Agent Richard Checo. Thanks to the writings of Roy Hazelwood, Stephen G. Michaud, John Douglas, Mark Olshaker, Peter Vronsky, Nigel Cawthorne, and many more for helping me to get inside the mind of a killer.

And apologies to the residents of Asherton, TX, whose town I completely fictionalized and then burnt down.

I also want to thank two people who encouraged me to devote the countless hours it takes to create a novel. First, my friend and fellow author, Brian Wheeler—who made me believe that it was possible—and to my former teacher, Nancy VanMeter—for telling me to “keep writing.”

I’m sure that I’ve forgotten to list several people who have helped in one way or another. To all of those unsung heroes, thank you. It really is “who you know,” and that’s not a bad thing. In fact, I think it may be the best part. 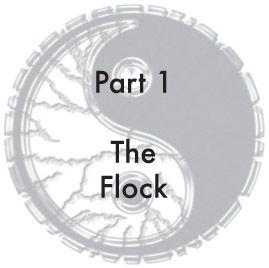 Jim Morgan watched as reflections of the patrol car’s flashing lights danced across the front window of the remote gas station. He strained to see beyond the strange and ominous shadows into the building’s interior. Although the call from dispatch warranted only a routine robbery report, for some reason, an irrational yet overwhelming feeling of dread crept over the edges of his consciousness. He couldn’t explain the sensation—cop instincts, intuition, or premonition—but he knew something wasn’t right. He took a deep breath and released a prolonged and deliberate exhalation. As he exited the vehicle, he forced away the feeling that something dark awaited him.

He noted the absence of the moon. The darkness seemed solid and eternal beyond the pool of radiance cast by the lights of the cruiser and gas station. He felt as if he sat on the edge of the world, and nothing else existed in the universe. Turning his gaze back toward the station, the feeling took root again.

He couldn’t pinpoint the source of his fear, which frightened him even more. For Jim, the worst kind of fear had always been one without a name. Out of trepidation, he considered calling to check on his wife, Emily, and their daughter. He consulted his watch and decided against it. He didn’t want to wake them.

His partner, Tom Delaine, said, “You okay? You look like somebody pissed in your cornflakes.”

“I’m fine. Let’s get this over with. It’s past my bedtime, and I just wanna go home.”

The look of concern was still evident on Tom’s face, but he nodded and walked toward the front door of the station. Neither man had drawn his weapon, since they knew from dispatch that the assailant had already fled the premises. Nevertheless, a proper report needed to be filed, and the station’s attendant had seemed adamant that someone should come right away.

As they entered the building, Jim caught the hint of a strangely familiar smell, but he was unable to identify it. He pushed the thought away and focused his mind on the task at hand.

Once inside, he scanned the room. The station’s counter rested along the back wall, parallel to the door. A man with dark hair and haunting gray eyes sat behind it. The attendant’s midnight black t-shirt stretched tight across his chest, firm muscles bunched underneath. The man didn’t say a word; he simply stared without expression at the two policemen.

As their gazes locked, Jim instinctively moved his hand closer to the pistol holstered at his side.

“Nice night, huh?” the attendant said. “The darkness tonight is…oppressive. It has weight.”

He couldn’t comprehend the logic that associated an oppressive darkness with a nice night, and he distrusted the man possessing a mind in which the two were linked. The significance of such a statement was apparently lost on his partner. Tom just raised his eyebrows and replied with a drawn out, “Okay.” After a pause, he said, “Were you the one who reported the robbery?”

Upon hearing the statement, Jim’s breath caught in his throat. He moved his hand over his gun but didn’t draw the 9mm Glock semi-automatic from its holster.

“Who was murdered?” Tom said.

The attendant didn’t answer, and although Jim couldn’t be sure, he thought a suppressed grin had passed over the man’s face. Instead of a reply, the attendant leaned forward and shifted his gaze down one of the station’s aisles.

Jim followed the man’s stare to where a gruesome image caught him unprepared, bombarding his senses.

The dead man at the end of the aisle had been stripped naked. Blood was everywhere. Numerous lacerations ran along the length of his body, but the frenzied slashes were most prevalent around the heart, lungs, and sexual organs. His eyes had been gouged out.

Without hesitation, both troopers drew their weapons and pointed them at the strange man behind the counter. Tom took a step forward and said, “Get your hands where I can see them!”

The suspect made no attempt to bring his hands up from beneath the counter. In fact, the formation of a smile constituted his only movement as a malicious grin spread across his face. The smile held no joy, nor love, nor warmth. It was cold, making Jim feel like a fly trapped in a spider’s web.

Tom took another step forward and repeated himself with no better results. He had now advanced to no more than three feet from the counter. Jim, on the other hand, had taken a step back and wanted to scream at Tom that he had moved too close. The thought dissipated when the man behind the counter spoke in a calm, yet commanding voice. “Do you like it? It’s my version of a killing by Andrei Chikatilo, Russia’s Rostov Ripper. You’re probably not familiar with him. While you were learning about Lincoln and Washington, I was learning about Jack the Ripper, Albert Fish, Ed Gein, the Zodiac. Those were just a few of my founding fathers.” The killer’s eyes darted between them. “You boys don’t recognize me, do you?”

Tom screamed at the man with even greater ferocity. “I don’t care who you are…just put your hands on your head. NOW!”

The killer shot Tom an uninterested glance and said, “You should show me a little more respect. After all, I am a bit of a celebrity. My name is Ackerman.”

Jim felt his breath stripped away once again. When he had first laid eyes upon the man, he had noticed a vague familiarity. Now, his synapses fired, and he made the connection. He had seen the man’s face on television, a two-hour special presented by one of those network news shows. He tried to remember the name of the special. It was something along the lines of
An Experiment in Madness
, but he couldn’t remember the exact title. He did, however, remember the description of the man and his hideous crimes. The program had described the kind of monster that was only supposed to exist in the minds of Hollywood’s most creative—not a person of flesh and blood who found substance in the real world.

Love in London (Restless Hearts) by Keane, Hunter J.
Given (Give &Take) by Kelli Maine
Classified Woman by Sibel Edmonds
The Prize by Brenda Joyce
Six Feet From Hell: The Lost Chronicles (Book 1) by Coley, Joseph A.
Whatever...Love Is Love by Maria Bello
His Secret by Ann King
My Bad Boy Biker by Sam Crescent
The Rise of Vlad (The Seeker Series Book 3) by Ditter Kellen
Highly Sexed by Justine Elyot