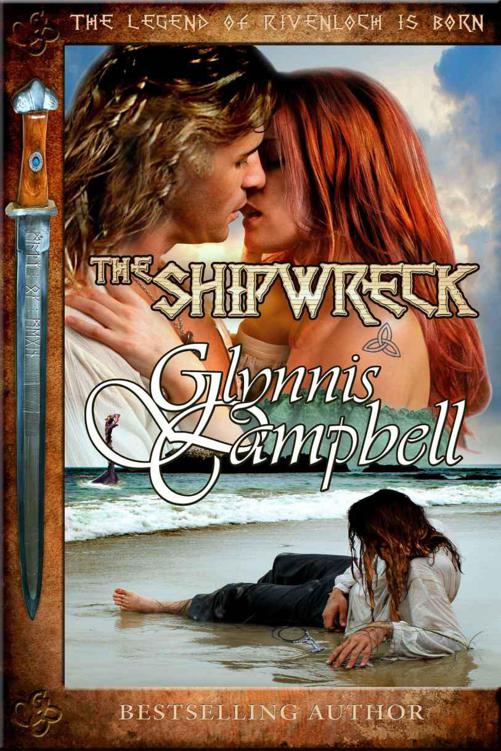 He came to invade her land...instead he enthralled her heart

“What do you intend to do with me?” he asked.

“I haven’t decided yet,” she said.

She frowned.  Kill him?  In cold blood?  Obviously, he knew nothing about chivalry.  She straightened with pride, planting the poker between her feet like a blade.  “I can’t do that.  Unlike you, my sense of honor prevents me from slaying unarmed men.”

He lifted a brow in mockery.  “Give me a blade then,” he suggested.

Avril gave him a sardonic smirk.  She wasn’t so foolhardy as to think she could easily triumph over a gargantuan Northman.  But she didn’t appreciate his insulting attitude.  “I may be honorable, but I’m not soft in the head.”

Her composure slipped, but only for an instant.  “I assure you, you wouldn’t be the first man I sent limping from the field of battle.”

His eyes narrowed suggestively.  “And you wouldn’t be the first woman I laid out flat on her back.”

This work is a work of fiction.  Names, places, characters and incidents are the product of the author’s imagination or are used fictitiously. Any resemblance to actual events, locales or persons, living or dead, is coincidental.
Copyright © 2013 by Glynnis Campbell
E-book Copyright © 2013 by Glynnis Campbell
All rights reserved.  No part of this book may be reproduced in any form or by any electronic or mechanical means, including information storage and retrieval systems, without permission in writing from the author, except by a reviewer who may quote brief passages in a review.
Book design and illustration by Richard Campbell
Cover photo "Shipwrecked" by
Ari and Rachel Ailin
ailinstock.deviantart.com
ISBN-10: 1938114086
ISBN-13: 978-1-938114-08-3
Glynnis Campbell – Publisher
P. O. Box 341144
Arleta, California  91331
Contact:[email protected]

Other books by Glynnis Campbell:

my dear friend and rowing partner

on the Viking longship on Roskilde Fjord

Alexander Jacobson for his books

OFF THE EASTERN COAST OF PICTLAND

T
he last ominous sound Brandr heard, before the icy ocean closed over his head, blocking out the roar of the storm and the crash of the waves, was the deep crack of his longship splitting apart.

The current dragged at his sealskin cloak and boots, pulling him down.  But with his one still useful arm, he managed to claw his way to the surface.  Gasping frosty air into his lungs as he broke through the waves, he blinked back the stinging saltwater, trying to see in the relentless black night.  The ship’s lanterns had gone out.  No light came from the distant shore.  Even the trusty stars were hidden behind thunderheads.

A gulp of seawater choked off his cries.  He fought to stay afloat in the paralyzing cold, turning in the water, listening for his shipmates.  But all he could hear was the howl of the wind, the pounding of the sea, and the splintering of wood as his ship was dashed against the rocks.

A flash of lightning split the sky, zigzagging down like Thor’s avenging spear to blacken the timber of the mast.  Before Brandr could wonder what he’d done to offend the god, thunder rocked the heavens, and the top of the mast exploded into sparks, igniting the square sail.  For a moment it looked as if the dragon painted on the canvas was breathing fire.

By the light of the flaming sail, Brandr could see the extent of the damage to his ship.  The hull was broken.  Ropes snapped wildly in the shrieking wind.  Chests and oars slid into the sea.  And his crew…

Shuddering with cold and pain, fighting the tide, he called over the roaring of the storm until he was hoarse.  He found four of his men.  They were dead.

The rain eventually arrived to extinguish the fiery wreckage.  Brandr—beaten by the storm, devastated by loss, and too exhausted to care what happened to him—used the last of his strength to climb atop the splintered prow of his ship and resigned himself to the whim of the gods.

Death was following him.  It had already come for his wife and children.  Now it had come for his men.  Soon it would come for him.  And as far as Brandr was concerned, it could have him.

“Stay close!” Avril called after Kimbery, shaking her head as the four-year-old raced ahead of her across the wet sand.  Her intrepid daughter possessed insatiable curiosity, incurable wanderlust, and a stubborn will that left her deaf to her mother’s warnings.

Not that there was much to warn her about.  Here in their seaside home, they lived far out of everyone’s way.  No one would stumble across their stone cottage or cross their stretch of beach by accident.  Their exile to the eastern shores had left them in a location that was remote, isolated...and far enough from her ancestral home of Rivenloch to satisfy the brothers who’d stolen it from her.

In the distance, Kimbery squealed as she bent over some treasure along the tide’s edge—probably a pretty shell or a starfish washed ashore in last night’s storm.  Avril kicked off her boots and hefted up her basket.  With any luck, the wild tempest had stirred up something edible from the sea.

The brothers who’d banished her had probably expected her to starve, her and her “bastard Viking spawn,” as they called Kimbery.  Certainly, her death would have been convenient for them.

But Avril hadn’t obliged them.

As willful as her daughter, she’d persisted, refusing to die.  The land was hostile to crops, but she’d adapted to it.  She’d learned to fish, to dig for clams, to pry mussels from rock, to snare coneys, to raid seagull nests, to make broth from seaweed and pottage from oysters.  She’d even traded a silver cloak pin to her closest neighbor for a ewe that had lost its lamb, so she had milk, butter, cheese, and wool for clothing.  A stream emptied into the ocean a short distance from the cottage, giving her ample water for drinking and bathing, and trout for supper.

But none of it was easy.  So when the weather turned violent as it had last night and the ocean’s belly roiled, spewing its contents onto the beach, Avril considered it a gift from the sea.  She might find a few stranded fish not yet picked apart by the gulls, a sizable clump of kelp, a useful shell, or even an odd tool or bit of line lost from a fishing boat.

Kimbery, of course, was convinced she’d unearth a mermaid’s jewels or Poseidon’s trident or an otter to keep for a pet.  She’d learned to relish the flash of lightning and the crack of thunder that foretold a day of treasure-hunting on the beach.

The wee lass didn’t know any different.  But Avril was well aware of how wrong their life of scraping and scavenging was.  If she thought too deeply about what had been taken from her—her maidenhood, her lands, a proper family and playmates for her daughter, and about the fact that she’d been groomed from birth, not to dwell in a hovel, but to command a sizable holding—she’d be filled with constant rage and an unquenchable thirst for vengeance.

But there was nothing she could do.  Invading Northmen had left her with child and killed her father.  And once he was dead, her four younger brothers, racked with jealousy over the favoritism their father had shown her as the rightful heir, declared Avril unfit to rule Rivenloch.  All the years her father had spent training her to take over his command—schooling her in the law, teaching her to wield a sword, bringing her up to be a moral, fair, honest leader—had been wasted.  She was sent into exile with her daughter and what little she could carry on her back.  And not a soul in Rivenloch had had the courage to face her thieving brothers and come forward in her defense.

Still, not a day passed that she didn’t think about winning it all back.  It was only concern for her daughter’s welfare that kept Avril from taking up her sword and marching boldly to the gates of Rivenloch to demand the return of her keep.

“Mama!” Kimbery cried, draping a piece of dark seaweed over her sun-bright curls and skipping along the sea foam.  “I’m a selkie!”

She smiled.  She often wondered if ocean-loving Kimbery might indeed be half-seal.  It was the little girl’s inventiveness that kept her own bitterness at bay and kept her fighting for survival.  Sometimes Avril thought that being impregnated by a Viking berserker was the best thing that had ever happened to her.

She scanned the rocky tidepools as she walked toward the ocean, searching for periwinkles, glancing occasionally up at Kimbery to be sure she wasn’t straying too far.  The wee lass had a healthy respect for the sea, but the tide could be unpredictable and unforgiving.

The air was calm today, and the sky was an unchanging gray, but evidence of the storm littered the beach.  Avril picked up a piece of driftwood and poked at a clump of kelp on the sand.  A fat abalone was attached to one of the strands, and it would make a nice supper tonight.  She cut it loose, plopping it into her basket.  A small purple starfish with six legs was stuck to the kelp, too.  Though it was inedible, she added it to the basket to show to Kimbery, knowing she’d like its color.  Closer to the water, she found a few crabs, but their shells had been picked clean by the seabirds.

She glanced up.  Kimbery was hunkered down beside a tiny crab on the sand, and when the tide rushed in to cover it, the lass shrieked and leaped up, running and giggling as the ocean chased her.

Avril was still grinning when her attention was caught by something floating off the rocky point that jutted into the sea.  It looked like a substantial piece of wood, maybe a crate or part of a cart, something that might prove useful.  As she gradually made her way toward the point, she collected a few mussels for pottage and a large clamshell suitable for a bowl.

Avril narrowed her eyes at the wood bobbing in the water.  What was it?  Though one end appeared to be splintered, the other sides were finished.  Maybe it was a broken chest or a table.

“In a moment!” she called back, studying the piece as it was tossed by the current.

That got her attention.  Avril whipped her head around and peered down the shoreline to where Kimbery was squatting beside a furry bulk on the sand.

Of course, Avril realized—Kimbery was pretending she was a selkie, so the dead seal must be her da.  The lass had a vivid imagination.  “I see!”  A seal was indeed a good find.  If it was freshly killed, its meat could keep their bellies full a long while.  And she could make coats and slippers out of its fur.  “I’ll be right there!  Don’t touch it!”

Epic by Annie Auerbach
Out of Time by April Sadowski
The Weight of Love by Perry, Jolene Betty
New Reality: Truth by Michael Robertson
Total Constant Order by Crissa-Jean Chappell
Dictator by Tom Cain
Saint Errant by Leslie Charteris
The Face in the Forest by Benjamin Hulme-Cross
The Prettiest One: A Thriller by James Hankins
Duality (Cordelia Kelly #1): Empath Urban Fantasy by Hawk, Ryanne