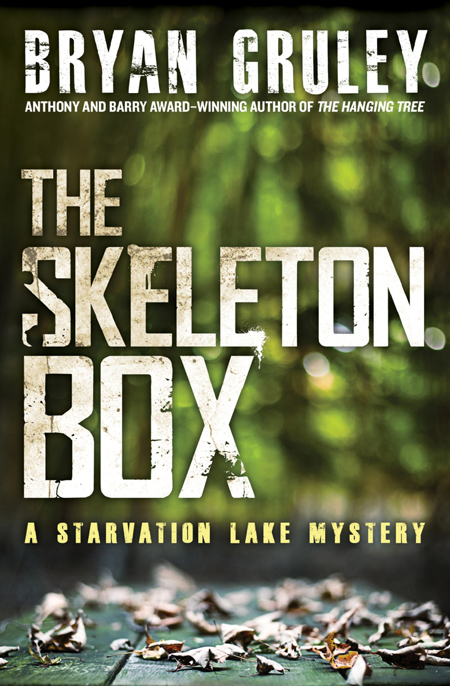 “Bryan Gruley is a gifted writer, and in
The Skeleton Box
he’s turned his gifts to the secrets and lies that ultimately rip apart Starvation Lake. . . . Gruley writes elegiacally about small-town America, but his deepest love is for its newspaper.”

“Gruley knows how to drag you kicking and screaming into a story so gripping that you’ll probably devour it in one gulp.”

“An author who has mastered the conventions of his genre. Discriminating readers will be anxiously awaiting the third book in this promising series.”

“Bryan Gruley is off to a phenomenal start!”

“Bryan Gruley: Remember the name. You should be hearing it often in the future.”

Does Gus Carpenter really want to know what’s inside the skeleton box? In Anthony– and Barry award–winning author Bryan Gruley’s gripping new novel, Gus must decide if the truth is better off dead and buried.

Mysterious break-ins are plaguing the small town of Starvation Lake. While elderly residents enjoy their weekly bingo night at St. Valentine’s Catholic Church, someone is slipping into their homes to rifle through financial and personal files. Oddly, the intruder takes nothing—yet the “Bingo Night Burglaries” leave the entire town uneasy.

Worry turns into panic when a break-in escalates to murder. Suddenly, Gus Carpenter, editor of the
Pine County Pilot,
is forced to investigate the most difficult story of his life. Not only is the victim his ex-girlfriend Darlene’s mother, but her body was found in the home of Bea Carpenter—Gus’s own mother. Suffering from worsening dementia and under the influence of sleeping pills, Bea remembers little of the break-in.

With the help of Luke Whistler, a former
Detroit Free Press
reporter who came north looking for slower days and some old-fashioned newspaper work, Gus sets out to uncover the truth behind the murder. But when the story leads him to a lockbox his mother has kept secret for years, Gus doesn’t realize that its contents could forever change his perception of Starvation Lake, his own family, and the value of the truth.

BRYAN GRULEY
is reporter at large for Bloomberg News and the author of
The Hanging Tree
and
Starvation Lake.
Formerly the Chicago bureau chief of
The Wall Street Journal,
Gruley shared in the Pulitzer Prize given to the newspaper for coverage of the September 11 terrorist attacks. He has won the Anthony, Barry, and Strand Awards and was nominated for an Edgar Award for best first novel. He lives with his wife in Chicago.

THE SOURCE FOR READING GROUPS

Thank you for purchasing this Touchstone eBook.

Sign up for our newsletter and receive special offers, access to bonus content, and info on the latest new releases and other great eBooks from Touchstone and Simon & Schuster.

All rights reserved, including the right to reproduce this book or portions thereof in any form whatsoever. For information address Touchstone Subsidiary Rights Department, 1230 Avenue of the Americas, New York, NY 10020.

for kimi, karen, kathleen, mike, and dave
and in memory of our father

The Price of Power (The Price of Secrets Series Book 2) by Ashley Drake
Spirit [New Crescent 2] (BookStrand Publishing Romance) by Mary Lou George
Worth the Fight (Accidentally on Purpose) by Davis, L.D.
Alive in the Killing Fields by Nawuth Keat
On the Other Side by Michelle Janine Robinson
Carolyn Arnold - McKinley 04 - Politics is Murder by Carolyn Arnold
Hugo! by Bart Jones
Casteel 04 Gates of Paradise by V. C. Andrews
Limitless by Robert J. Crane
Godless by James Dobson