Read A Season for Love Online

A Season for Love 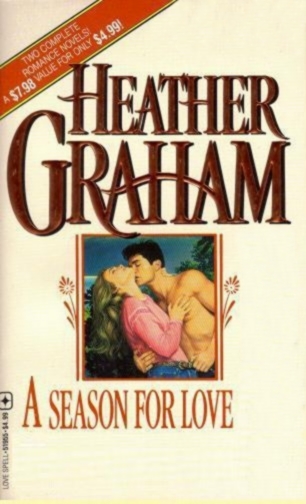 SHE WOULD DENY HERSELF NOTHING.

Ronnie tilted her head back, her eyes shining. Her fingers caressed the rich thickness of his black hair, touching it with devouring reverence. His eyes began to smolder once more as they bored into hers, still carrying that infinite tenderness. His lips touched hers softly. These things she savored sweetly for a cherishable moment, her mouth pliant, her lips moistly parted. Then a brushfire began—a longing, a yearning, a needing of such intensity, it stole her breath away. It took her from the confines of the cabin to a haven where sight, sound, and reality were all lost in abandon to one overwhelming sensation—
him.

The words struck out in anger. They were not the words he had first used. Two strangers aboard a ship cruising at sea, their words, their kisses, their touch, had been filled with a fierce, tender passion.

And Ronnie von Hurst had abandoned herself; so briefly, to a love she knew could never be. What was there to warn her that Drake O'Hara would appear at her isolated South Carolina island estate? That she would have to receive him as an honored guest? That she would be powerless to explain, torn between the man who was her husband in name only and the man she desired beyond anything in the world -- the man who despised her as a faithless wife and loved her with a passion she alone could equal?

Tears filled her eyes as she left the house.

She had contained and concealed them through the preceding argument, but now, as she faced the wind, she could allow them to form.

Now that she was alone.

Which was funny really, because she was always alone.

Always alone, even among others, even with the man for whom she shed her tears. They spoke, but they never talked. Circumstances barred intimacy, bitterness barred friendship. All she received was harshness.

But she understood, and it was terrible to understand. It mean becoming the marble she lived with, never really showing emotion, choosing a course and following it, humoring him. . . .

She was humoring him now by leaving the house and taking to the sea, a vision of his limpid blue eyes in her mind. Eyes she understood, and fought against.

Standing on deck surrounded by people, her tears left her own sapphire gaze, and it became frosty, assessing. Completely confident, she entered the world she had no wish to join. Humoring. . . .

Suddenly, like the closing of one's eyes after a camera flash, a new vision replaced that of the pale blue eyes—a pair of eyes so darkly, vividly brown that they burned with a coal fire.

She blinked, realizing that she had just seen such a pair of eyes.

And to her dismay that quickly flashed image stayed with her, haunting her. She focused on pale, powdery blue, but the lighter color became continually obliterated by the darker hue. Extraordinary, really. And very, very foolish.

Because she would also leave the sea and return to the house.

It was the only word to adequately describe the sleek beauty of the tall brunette. Although a multitude of attractive young women frolicked around the poolside, displaying varying amounts of curvaceous flesh, she alone had the power to rivet the eye. She wasn't as voluptuous as some, nor was the teal-blue bikini she wore as bare as many others.

What attracted the eye went further than the perfectly proportioned build and smooth, golden-tanned skin. It was in the grace of her slightest movement, in the fluidity of her composed walk, in the very poise and serenity with which she surveyed the scene she had come upon.

She was as stunning and lithe as a panther, mused one of the men who watched her, and the thought struck him that, like the discreetly moving panther, she was seeking prey with slow, confident deliberation.

He almost laughed aloud at his own thought. With the flick of a finger, this one could draw the male of the species to her without ever needing to seek anything. He could easily imagine half the men around him swarming to her feet on their knees, as if she were a queen bee.

He sat back comfortably in the lounge chair, unaware that he was her male counterpart, and that the majority of the females taking the three-day cruise—from the giggling teenagers to the graying, plump matrons—had already created romantic fantasies in their minds with him in the starring role.

Drake O'Hara was the perfect picture of man at his very best. Black Irish, they would have called him in the land of his forebears, and like the Spaniards of the lost Armada who had been wrecked upon the Emerald Isle, he was dark, his hair a shade deeper than india ink, his eyes a deep, arresting brown. His complexion tanned easily to a golden copper, and when he smiled—an act that could be charming or chilling, depending on his motive—his straight white teeth were almost startling against the backdrop of his skin and the neat black mustache that framed lips that could either be full and sensuous or grim and tight. He had inherited his coloring from the Spaniards, his fiery temper from the Irish. Fortunately, he was also capable of learned control and diplomacy, traits he liked to think he inherited from his American mother.

Geneva Connection, The by Bodenham, Martin
The Remarkable Flight of Marnie McPhee by Daniel Karasik
Cemetery of Swallows by Mallock; , Steven Rendall
Gift of the Golden Mountain by Streshinsky, Shirley
The Shadow Stealer (Silver Moon Saga Book 3) by Melissa Giorgio
The Whispers of The Sprite (The Whispers series #1) by Mazurkiewicz, Joanna
In Her Wildest Dreams by Farrah Rochon
It's Always The Pretty Ones by Howard, Vonda
Murder My Love (Kindle Books Mystery and Suspense Crime Thrillers Series Book 3) by Tad S. Torm
SpankingMyBoss by Heidi Lynn Anderson