Read The Snake, the Crocodile, and the Dog Online

The Snake, the Crocodile, and the Dog 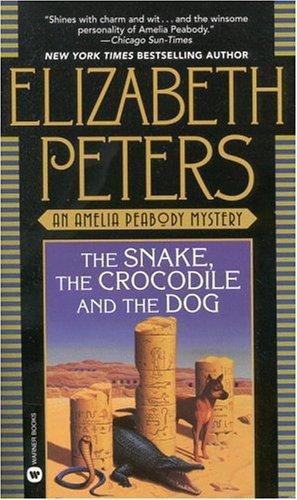 GLOSSARY OF ARABIC WORDS AND PHRASES

"Some concessions to temperament are necessary if the marital state is to flourish."

I believe I may truthfully claim that I have never been daunted by danger or drudgery. Of the two I much prefer the former. As the only unmarried offspring of my widowed and extremely absentminded father, I was held responsible for the management of the household— which, as every woman knows, is the most difficult, unappreciated, and lowest paid (i.e., not paid) of all occupations. Thanks to the above mentioned absentmindedness of my paternal parent I managed to avoid boredom by pursuing such unwomanly studies as history and languages, for Papa never minded what I did so long as his meals were on time, his clothing was clean and pressed, and he was not disturbed by anyone for any reason whatever. At least I thought I was not bored. The truth is, I had nothing with which to compare that life, and no hope of a better one. In those declining years of the nineteenth century, marriage was not an alternative that appealed to me; it would have been to exchange comfortable serfdom for absolute slavery— or so I believed. (And I am still of that opinion as regards the majority of women.) My case was to be the exception that proves the rule, and had I but known what unimagined and unimaginable delights awaited me, the bonds that chafed me would have been unendurable. Those bonds were not broken until the death of my poor papa left me the possessor of a modest fortune and I set out to see the ancient sites I knew only from books and photographs. In the antique land of Egypt I learned at last what I had been missing— adventure, excitement, danger, a life's work that employed all my considerable intellectual powers, and the companionship of that remarkable man who was destined for me as I was for him.
What mad pursuits! What struggles to escape! What wild ecstasy!

I am informed, by a certain person of the publishing persuasion, that I have not set about this in the right way She maintains that if an author wishes to capture the attention of her readers she must begin with a scene of violence and/or passion.
"I mentioned— er— 'wild ecstasy,'" I said.
The person gave me a kindly smile. "Poetry, I believe? We do not allow poetry, Mrs. Emerson It slows the narrative and confuses the Average Reader." (This apocryphal individual is always referred to by persons of the publishing persuasion with a blend of condescension and superstitious awe, hence my capital letters.)
"What we want is blood," she continued, with mounting enthusiasm. "And a lot of it! That should be easy for you, Mrs. Emerson. I believe you have encountered a good many murderers."
This was not the first time I had considered editing my journals for eventual publication, but never before had I gone so far as to confer with an editor, as these individuals are called. I was forced to explain that if her views were characteristic of the publishing industry today, that industry would have to muddle along without Amelia P. Emerson. How I scorn the shoddy tricks of sensationalism which characterize modern literary productions! To what a state has the noble art of literature fallen in recent years! No longer is a reasoned, leisurely exposition admired, instead the reader is to be bludgeoned into attention by devices that appeal to the lowest and most degraded of human instincts.
The publishing person went away shaking her head and mumbling about murder. I was sorry to disappoint her, for she was a pleasant enough individual— for an American. I trust that remark will not leave me open to an accusation of chauvinism, Americans have many admirable characteristics, but literary taste is rare among them. If I consider this procedure again, I will consult a
British
publisher.

I suppose I might have pointed out to the naive publishing person that there are worse things than murder. Dead bodies I have learned to take in my stride, so to speak, but some of the worst moments of my life occurred last winter when I crawled on all fours through indescribable refuse toward the place where I hoped, and feared, to find the individual dearer to me than life itself. He had been missing for almost a week I could not believe any prison could hold a man of his intelligence and strength so long unless . . . The hideous possibilities were too painful to contemplate, mental anguish overwhelmed the physical pain of bruised knees and scratched palms, and rendered inconsequential the fear of enemies on every hand. Already the swollen orb of day hung low in the west. The shadows of the coarse weeds stretched gray across the grass, touching the walls of the structure that was our goal. It was a small low building of stained mud-brick that seemed to squat sullenly in its patch of refuse-strewn dirt. The two walls visible  to me had neither windows nor doors. A sadistic owner might keep a dog in such a kennel . . .
Swallowing hard, I turned to my faithful reis Abdullah, who was close at my heels. He shook his head warningly and placed a finger on his lips. A gesture conveyed his message: the roof was our goal. He gave me a hand up and then followed.
A crumbling parapet shielded us from sight, and Abdullah let out his breath in a gasp. He was an old man, the strain of suspense and effort had taken their toll. I had no sympathy to give him then, nor would he have wanted it. Scarcely pausing, he crawled toward the middle of the roof, where there was an opening little more than a foot square. A grille of rusted metal covered it, resting on a ledge or lip just below the surface of the roof. The bars were thick and close together.
Were the long days of suspense at an end? Was he within? Those final seconds before I reached the aperture seemed to stretch on interminably. But they were not the worst. That was yet to come.
The only other light in the foul den below came from a slit over the door. In the gloom of the opposite corner I saw a motionless form. I knew that form, I would have recognized it in darkest night, though I could not make out his features. My senses swam. Then a shaft of dying sunlight struck through the narrow opening and fell upon him. It was he! My prayers had been answered! But— oh, Heaven— had we come too late? Stiff and unmoving, he lay stretched out upon the filthy cot. The features might have been those of a waxen death mask, yellow and rigid. My straining eyes sought some sign of life, of breath . . . and found none.
But that was not the worst It was yet to come.
Yes, indeed, if I were to resort to contemptible devices of the sort the young person suggested, I could a tale unfold ... I refuse to insult the intelligence of my (as yet) hypothetical reader by doing so, however. I now resume my ordered narrative.