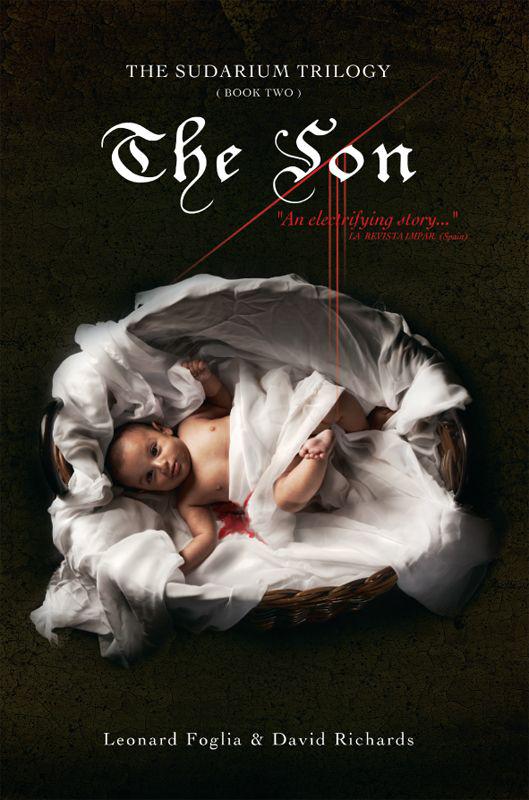 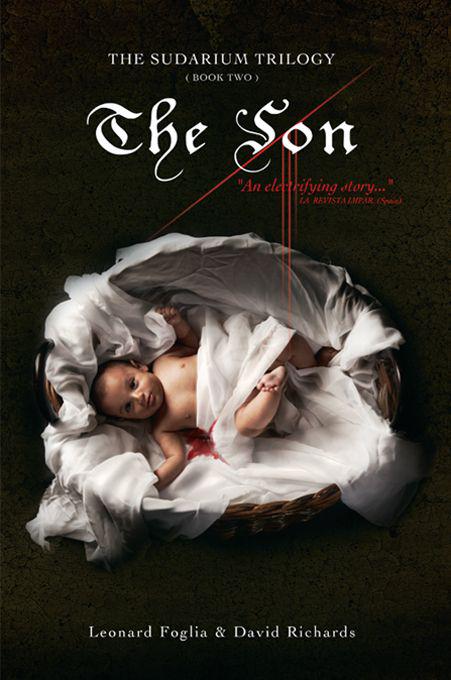 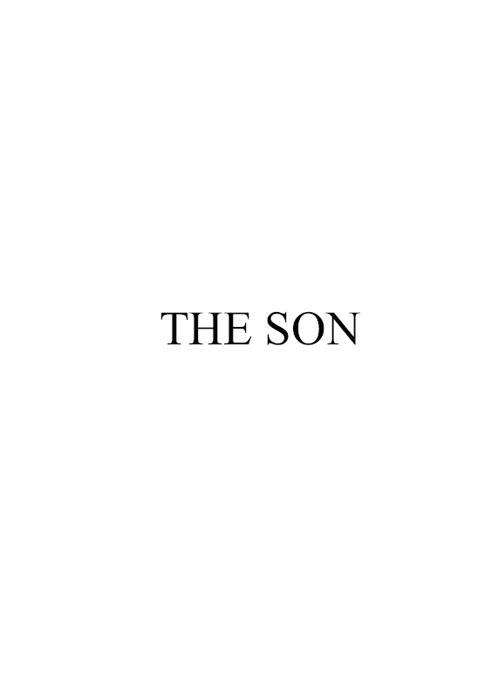 The Surrogate
(The Sudarium Trilogy – Book One)

Face Down in the Park

Played Out: The Jean Seberg Story 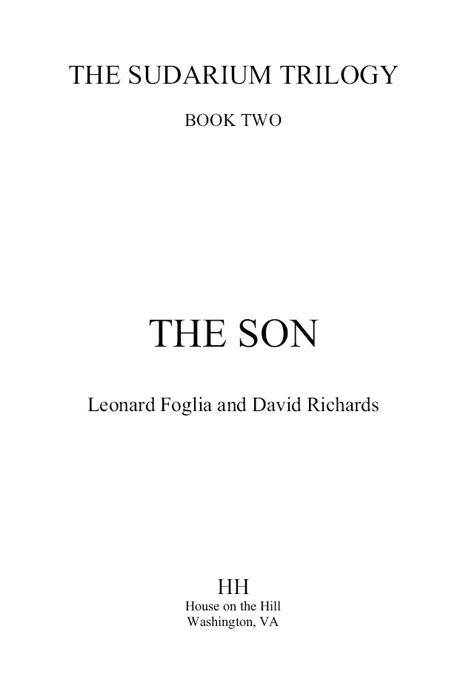 The authors would like to thank The Barbara J. Zitwer Agency for getting the books published in Spain, Mexico, Brazil, Poland and Russia. Gonzalo Albert for his editorial support on books one and two. And the people of Oviedo, Spain for so graciously welcoming us to their town.

Copyright – 2010 – Leonard Foglia and David Richards. All rights reserved. No part of this book may be used or reproduced in any manner whatsoever without written permission except in the case of brief quotations embodied in critical articles or reviews.

“He walks the earth,”

Monsignor Gallagher stared deep into the eyes of his assistant, Father Mathias, and although he was having trouble breathing, the words came out with perfect clarity.

Over eighty, the old priest lay on the floor of the church in East Acton, Massachusetts that he had served faithfully for nearly sixty years. His face was a spider web of wrinkles and his body a spindly version of what had once been strong and imposing. But the voice showed no signs of age.

“He walks the earth,” he repeated, amazement coloring his frail features this time.

Father Mathias had just pulled the priest from the confessional, where he had collapsed in the midst of absolving Mrs. Connelly of her usual inconsequential sins. Mrs. Connelly stood by, momentarily speechless with the fear that her confession might have provoked what appeared to be a heart attack or an impending one. Father Mathias wiped beads of perspiration off the monsignor’s brow with the back of his hand, reassuring him that help was on the way and that everything would be fine. Outside, the siren of an approaching ambulance grew louder.

Mrs. Connelly had kept her distance, since running to get Father Mathias in the rectory with the news that Monsignor Gallagher seemed to have fallen and injured himself. The dull thud had been followed by silence, and when she’s asked, “Are you okay, Monsignor?” there had been no response.

“The monsignor was in there for so long with that young man,” the woman muttered, as much to herself as to anyone else. “Maybe the heat got to him. Those heavy curtains shut out every last breath of fresh air. I can’t imagine what that young man had to confess that took so long, but it seemed like hours. I get short of breath in there after a few minutes. And the monsignor is getting on in years, after all.”

Mrs. Connelly, caught up short in her monologue, took a moment to recover her bearings. “The person before me…a young man…Well, youngish…Twentyish, I’d say…The Monsignor is going to be all right, isn’t he?”

“Well, maybe not hours. But forty-five or fifty minutes, at least. I checked my watch? When the young man finally left, I went in and said the act of contrition, but I heard nothing back. Then there was this thump and I realized that Monsignor Gallagher had fallen over or hit his head or something…I loved him so, Father Mathias.”

“Monsignor Gallagher is still with us, Mrs. Connelly.”

Outside Our Lady of Perpetual Light, an ambulance skidded to a stop and a team of rescue workers burst down the church aisle and lifted the Monsignor onto a stretcher.

“It must have been the heat,” Mrs. Connelly informed no one in particular. “It’s hotter than blazes in that confessional.”

“Scuse me, lady,” one of the workers said, as they maneuvered the stretcher back up the aisle. The old man’s breathing was irregular, but there were no signs of physical distress on his face. To the contrary, thought Father Mathias, as he followed behind, his features had a strange peacefulness about them.

The rescue workers slid the stretcher into the back of the ambulance, and Father Mathias prepared to climb in beside his mentor.

Before the doors were closed, Mrs. Connelly gave a tug on his sleeve. “Heat prostration isn’t serious, is it?”

“No, Mrs. Connelly. The Monsignor will be good as new in no time. But tell me something. This young man, did you recognize him?”

“I never saw him before. He’s not from this parish, that’s for sure.”

“And he was in the confessional for nearly an hour?”

“I’m sure of it. I checked my watch several times. I even thought of going home and coming back later. What could he have had to confess, I wonder? He seemed like such a sweet young man. He smiled at me when he left. Lovely smile. As if we’d known one another all our lives. I’ll never forget it.”

The ambulance doors closed and the vehicle ground up the gravel driveway, producing a cloud of dust that enveloped Mrs. Connelly. The woman had stopped talking and was waving a handkerchief in the air, as if the Monsignor were about to take a long voyage and she had inadvertently been left behind on the dock.

The wail of the siren cut into the tranquility of Acton’s leafy streets, like a knife slashing an impressionist landscape, as the ambulance made its way past the East Acton Library, down Main Street and then west to the emergency entrance of the Good Shepherd Memorial Hospital. A few pedestrians stopped to watch the gleaming red and white vehicle race by and a couple put their hands to their ears to block out the noise, but most went about their business, unaware that inside a man’s life hung in the balance.

Strapped to the gurney, Monsignor Gallagher felt his body lurch to the side, each time the ambulance careened around a corner. The sound of the siren came to him, as if through layers of cotton, far away, like a crying child left behind. The oxygen mask helped him breathe. But otherwise he experienced no physical sensations. The outside world seemed to grow progressively fainter and he had the impression that he was plunging backward in time, back to the brick church before the recreation hall had been added to it and receptions were still held in the basement, back to the rectory before it had acquired the new aluminum siding, back to when Father Jimmy, fresh from the seminary, had arrived at Our Lady of Perpetual Light, eager to begin his ministry.

How many years now? His mind was incapable of such calculations.

All he could remember was that Father Jimmy had looked more like an altar boy than a parish priest. But his mind was sharp and clear and, most importantly, his mission was true. As true as that of any priest he’d met before or after. And with the clean cut good looks that would serve him well, as they do in any profession, if the truth were acknowledged. “This one will go to the top,” he had thought after only one week. Father Jimmy would rise as high in the church as he wished. He had the true calling.

Then the girl had arrived.

A sudden pain in his chest interrupted his recollections, and he was aware again of the siren and the emergency aide at this side. The ambulance was weaving back and forth, forcing its way through traffic and the aide was telling him to hold on for just a few more blocks, they were almost there. But the sense of urgency lasted only a second and the monsignor let himself be carried away by the backward drift. And the image of the girl reappeared in his consciousness. Troubled and helpless, but appealing in spite of it all. Hannah was her name. She was pregnant and unmarried, living not far from the church – Father Gallagher couldn’t remember where. But he could picture her at mass, seated toward the back, wanting to participate, but held back by some fear. She attended some of the Saturday night socials, too. Always hovering timidly on the fringes.

And Father Jimmy had taken it upon himself to help her. Little by little, that troubled girl had supplanted his true mission. At first, Father Gallagher had thought it was an innocent crush, a flirtation, not uncommon in youthful priests, but as time had gone on, it was evident that something deeper bound the two young people together. He’d tried to put a stop to it. He’d spoken sternly to Father Jimmy. He’d even arranged for the girl to give birth in seclusion under an assumed name and for the child to be adopted by a good Catholic family.

Father Jimmy had agreed to the plan and had taken it upon himself to convince Hannah that this solution was the best for all concerned. And then…then…what had gone wrong? Father Gallagher’s mind went fuzzy. Something had happened. Something unexpected. Snow, that was it. A fierce snowstorm that turned the landscape blindingly white and made it impossible to distinguish the ground from the sky, heaven from earth.

He’d waited for hours at the rectory house in Boston for Father Jimmy to deliver the young girl into his hands. Peering out the window, he’d attributed the growing delay to the worsening weather conditions and consoled himself with the thought that Father Jimmy would telephone in case of trouble. But the telephone failed to ring, and as time wore on, it became clear to Father Gallagher that his protégé wasn’t coming. The girl had bewitched him. That beautiful, disturbed girl had lured him away from the path of righteousness and the career that had loomed so promising.

Father Gallagher never went to bed that night. He sat in the window, watching the snow pile up on the windowsill, bury the automobiles parked in the street and reduce the glow of the streetlights to yellow pinpricks. The whole city seemed swathed in the winter whiteness. The usual nighttime noises were muffled, then stilled, as if a switch had been flipped. It was white everywhere, as it was in the inside of the ambulance. The past and the present mingled indiscriminately in the priest’s mind. Only the faint siren’s wail testified to a reality beyond the ambulance doors.

Like that snow-drifted landscape twenty years ago, like the sheet that now covered his body, strapped to a gurney, whiteness and quiet seemed to be taking possession of his soul.