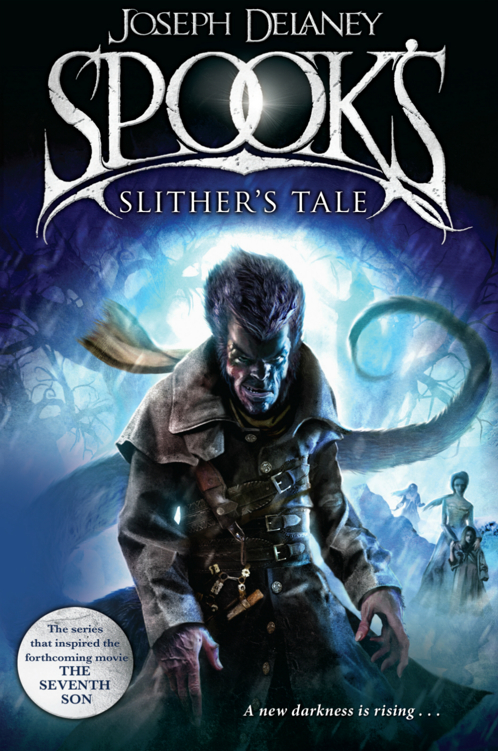 Extract from The Spooks Bestiary

Chapter 2: No Manners at All

Chapter 7: The Bite of a Blade

Chapter 8: Only One Chance

Chapter 12: The Keeper of the Gate

Chapter 23: He Who Can Never Die

Chapter 25: Farewell to My Sister

Chapter 27: A Cry in the Night

Chapter 28: We will Meet Again

Glossary of The Kobalos World

My name is Slither, and before my tale is finished, you’ll find out why . . .

Slither is not human. Far from the Spook-protected County, he preys upon humans, sneaking into their homes to gorge upon their blood while they sleep.

When a local farmer dies, it’s only natural that Slither should want to feast on his lovely daughters. But the farmer has offered him a trade: in return for taking the younger girls to safety, Slither can have the eldest daughter, Nessa, to do with as he wishes . . .

Slither’s promise takes him and Nessa on a treacherous journey where enemies await at every turn. Enemies that include Grimalkin, the terrifying witch assassin, still searching for a way to destroy the Fiend for good.

The latest instalment of the Wardstone Chronicles introduces Slither, one of the most terrifying creatures Joseph Delaney has yet created.

EXTRACT FROM THE SPOOKS BESTIARY

The Kobalos are not human. They walk upright but have something of the appearance of a fox or a wolf. The body is covered with dark hair; the face and hands are shaven according to custom; the mage wears a long black coat with a slit in the back to accommodate his tail, which can function as an extra limb.

These mages are solitary creatures who shun their fellow citizens and usually dwell beyond the fringes of the frozen Kobalos domain, which is far to the north of the continent known as Europa. Each one ‘farms’ a haizda, a territory which he has marked out as his own. Within it there are several hundred humans, living in hamlets, villages and farms. He rules by fear and magecraft, harvesting souls and accumulating power. He usually lives in an old, gnarled ghanbala tree, sleeping by day but travelling the boundaries of his haizda by night, taking the blood of humans and animals for sustenance. He
can
shift his shape, taking on the appearance of animals, and can also vary his size. This type of mage is also a formidable warrior whose favourite weapon is a sabre.

The Kobalos are a fierce, warlike race who, with the exception of their mages, inhabit Valkarky, a city deep within the Arctic Circle.

The name Valkarky means the City of the Petrified Tree; it is filled with all types of abomination that have been created by dark magic. Its walls are constructed and renewed by creatures that never sleep; creatures that spit soft stone from their mouths. The Kobalos believe that their city will not stop growing until it covers the entire world.
1

1
The above is based upon the writings of a very early spook called Nicholas Browne, who travelled far beyond the borders of the County. Apart from his notebooks, there is no evidence that any of his assertions are true but we must keep an open mind. The world is a big place and much remains to be explored – John Gregory

T
HE HIGHEST POINT IN THE
C
OUNTY
IS MARKED BY MYSTERY
.
I
T IS SAID THAT A MAN DIED THERE IN A
GREAT STORM, WHILE BINDING AN EVIL
THAT THREATENED THE WHOLE WORLD
.
T
HEN THE ICE CAME AGAIN, AND WHEN IT
RETREATED, EVEN THE SHAPES OF THE
HILLS AND THE NAMES OF THE TOWNS
IN THE VALLEYS CHANGED
.
N
OW, AT THAT HIGHEST POINT ON
THE FELLS, NO TRACE REMAINS OF WHAT
WAS DONE SO LONG AGO,
BUT ITS NAME HAS ENDURED
.
T
HEY CALL IT –

IT IS VERY
dark in my bedroom. The candle has guttered, the flame has flickered and died. It is cold too, despite the extra blankets. It has been a long winter, one of the very worst. This is spring but there is still a crust of frozen snow on the fields and the farmyard flags, and also ice inside my room patterning the windowpanes.

But it is my birthday tomorrow. I will be ten. I am looking forward to the cake. I have to blow out all its candles with one really big breath. If I do that, Father will give me my present. It is a dress – a red dress with white lace at the neck and hem.

I want to sleep. I squeeze my eyes tight shut and try. It’s
better
to sleep because then the night will pass quickly. I will open my eyes to see sunlight streaming in through the window, dust motes gleaming like tiny suns.

Suddenly I hear a noise. What is it? It sounds like something scratching on the floor by the wainscot. Could it be a rat? I fear big grey rats with their small eyes and long whiskers. My greatest fear of all is that one might find its way into my bed.

My heart begins to race with fear and I think of calling out for my father. But my mother died two years ago and he manages the farm all by himself. His days are long and tiring and he needs his sleep. No, I must be brave. The rat will soon go away. Why should it bother with my bed? There is no food here.

Again there comes a scratching of sharp claws on wood. My heart jumps with fear. The noise is nearer now, halfway between the window and my bed. I hold my breath, listening for the sound to be repeated. It is, and now it is much closer, just below my bed. If I were to look down, it might be staring up at me with its small beady eyes.

I
must
get up. I will run to my father’s room. But what if the rat’s whiskers touch my feet? What if I tread on its long thin tail?

Now it gets even louder. I feel a tug at my bedclothes and shiver with fear. The rat is climbing up onto my bed, using its claws to pull itself on top of the blankets. In a panic I try to sit up. But I can’t. I seem to be paralysed. I can open my mouth, but when I scream, no sound escapes my lips.

The rat is crawling up onto my body now. I can feel its small sharp claws pricking into my skin through the blankets. It is sitting on my chest. Its tail goes
thumpety-thump
, faster and faster, keeping perfect time with the beating of my heart.

And now there is a new thing, even more terrifying. The rat seems to be growing heavier by the second. Its weight is pressing down on my chest, making it difficult to breathe. How can that be possible? How can a rat be so large and heavy?

Now, in the darkness, I sense its face moving closer to mine. It’s a big face and I can feel the rat’s warm breath on my skin. But there is something even stranger than its size and weight. Its eyes are glowing in the dark. They are large and red, and by their lurid glare I can now see its face.

It isn’t a rat, after all. The face is that of a fox or wolf, with a long jaw and big sharp teeth. And those teeth are biting into my neck now. Long, thin, hot needles of pain pierce my throat.

I scream. Over and over again, I scream silently. I feel as if I am dying, slipping down into the deepest darkness, away from this world.

Then I am awake and the weight is gone from my chest. I can move now, and I sit up in bed and begin to cry. Soon I hear the sound of heavy boots pounding across the wooden boards of the corridor. The door is flung open, and Father enters carrying a candle.

He places it on the bedside table, and moments later I am
in
his arms. I sob and sob, and he strokes my hair and pats my back in reassurance.

Captured Heart (A Garrett's Point Novel) by Savanna Grey
Composed by Rosanne Cash
Flower of Scotland by William Meikle
This Very Moment by Rachel Ann Nunes
Personal History by Katharine Graham
The Single Dad's Second Chance by Brenda Harlen
Deadly Obsession by Katie Reus
Sensuality by Zane
The Billionaire's Bargain (First Desire: Taming Savannah) by Denise Avery
The Drop of the Dice (Will You Love Me in September?) by Philippa Carr