Read The Spy on Third Base Online

The Spy on Third Base (2 page)

“What’s the matter?” asked Mickey Stanner, the team’s scorekeeper, as T.V. sat down beside him. 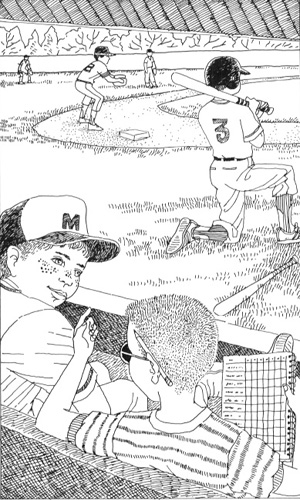 T.V. wedged his glove between them. “A guy in the stands called me a spy.”

Mickey chuckled. “So, what’s so bad about that? I wouldn’t mind being compared to James Bond.”

T.V. had to smile. “Yeah, I guess there are worse things than being a spy.”

T.V.’s eyes followed Chuck Philips as he stepped up to the plate. “What did you say, Mickey?”

“Nothing. Just that I’m moving away.” Mickey pushed his sunglasses up on his nose.

“Oh? Have you told Coach Parker?”

“Better tell him,” T.V. suggested. “We can’t play ball without a scorekeeper. Especially a good one like you.”

Mickey grinned. Few guys paid any attention to the scorekeeper. He just did his job
and hardly ever said anything. The coach might have a tough time finding a replacement for him, T.V. thought.

T.V. turned back to the game and saw Alfie strike out. Then Bus walked, and Rudy flied out, ending the top half of the fourth
inning.

Neither team got a runner on base again until the last inning when, with two outs, Chuck drew a walk.

T.V. glanced at the scoreboard on top of the fence in left field. It was still Mudders 3, Dragons 6.1 wonder what it would
have been if I hadn’t figured out where the Dragons were going to hit the ball, T.V. thought. Probably Mudders 3, Dragons
12.

But the Mudders had to get hits, too, he told himself. Without hits you don’t get runs.

He could read those Dragons like a book. They could still be beaten. He was sure of it.

It was up to him.

He put on his helmet, picked up his bat, and stepped to the on-deck circle. José was leading off.

José grounded out to short. Then T.V. stepped to the plate.

He took three balls and a strike, then flied out to center field.

“Tough luck, T.V.!” cried the man in the red sweatshirt as T.V. walked sadly back to the dugout.

Chuck drew another walk, Alfie singled, and the Peach Street Mudders began to roll. The bases were loaded when Zero came to
the plate. The lefty already had a single to his credit. T.V. felt sure that Zero had done his share for the day.

He began to reach for his glove when
crack!
came the solid sound of bat meeting ball, and T.V. saw the white pill soaring to deep right field! His heart soared, too,
as the ball sailed over the fence for a home run!

The Mudders fans went crazy. Zero was the last kid on earth anyone would dream would hit a grand slammer!

The Dragons came to bat for their last chance, and T.V. studied the leadoff batter, Lefty Cash. Lefty had already gotten a
single,
and had struck out his second time up. But T.V. didn’t think that Lefty was a weak hitter because he batted eighth in the
lineup. He could still be dangerous.

“Play deep, you guys!” he yelled to José and Alfie.

José moved back, but Alfie didn’t.

He resents my telling him where to play, T.V. thought, a little hurt.

Zero stepped on the mound, got the sign from Rudy, then pitched.
Smack!
Lefty met the ball head on, driving it to deep right field. It missed being fair by inches!

This time Alfie moved back closer to the fence.

Smack!
Another long drive to right field! This one was fair!

Alfie, his back against the fence, jumped and caught it.

T.V. had Barry play close to the foul line on Bucky Neal, and Bucky nailed one directly at him for the second out. Then Dale
grounded out, and the game was over. Mudders 7, Dragons 6.

T.V. leaped with joy as he ran in toward the dugout.

“Nice game, you guys!” he cried, slapping Chuck on the back and then Alfie. “Great catch, man! Like a big leaguer!”

Alfie’s eyes narrowed. “You the coach or something?” he said, his face straight as a ruler.

“Yeah,” Chuck cut in, eyeing T.V. as if he’d done something dirty. “You act as if you’re the only one with brains. The only
one who counts.”

T.V. stared at them.

He couldn’t believe it! His best friends — Chuck and Alfie — saying those awful things? Had he sounded so bad?

“I didn’t mean …” he started, but stopped short. He didn’t know what to say. He didn’t think it would make any difference
to them. They had made up their minds, and nothing he could say would change them.

Heck, he thought. I didn’t mean to
boss
them. I wanted to
help
them. Help the
team.
And I did. Don’t they realize that?

He looked around and saw that they were already heading off the field. Almost always the three of them would walk home together.
Now, suddenly, a barrier had come up between them, just because he had wanted to help. Maybe being a spy wasn’t such a great
idea after all, he told himself.

“T.V.!” someone called to him. It was Coach Parker.

“Nice work out there,” the coach said, smiling. “You figured out those Green Dragon players pretty well.”

T.V. shrugged. “Yeah. But I guess the guys aren’t that keen about it,” he replied. He was glad, though, that the coach had
noticed it. He hadn’t thought about that.

“Don’t worry about it, T.V. Maybe one or two aren’t, but most of them are.” The coach paused, thinking. “Why don’t you give
them
more of a chance the next time? Let them use their own judgment. If you see they can’t do as well, then use yours.”

“You never know,” Coach Parker said. “You might wind up being a great coach someday.”

He started to head toward the gate.

“Just a minute,” the coach called to him. T.V. turned. “A reporter, Mel Thompson, was asking me a lot of questions about you.
He noticed your ability to predict where the batters were going to hit and was really impressed. He wondered how you do it.”

T.V. laughed and shook his head. “I just study the batters, that’s all. I don’t
always
guess right.”

“Maybe not. But most of the time you do.”

T.V. felt nervous. He’d never thought
guessing the batters would have attracted that much attention, especially from a newspaper reporter.

“He might still be around,” Coach Parker said, glancing behind him. “If you’d like to meet him —”

“No! I mean, I can’t,” T.V. said, starting to edge toward the exit. “I promised my parents I’d come home right after the game.”

T.V. left the park and headed for home, thinking about the dumb excuse he’d given to the coach. His parents probably didn’t
even know he
had
a game. His mother always seemed to be too busy, and his father had never played a sport in his life, unless you counted
horseshoe pitching.

As he had suspected, his parents were surprised to see him in his uniform when he got home.

“Well, how did you make out?” his mother asked.

“Congratulations,” Mrs. Adams replied. “How about celebrating with some dinner?”

T.V. was hungry enough to eat a horse, but not exactly in the mood for celebrating.

“Guess what?” Mr. Adams said to T.V. when he came to breakfast the next morning. “You made the news.”

T.V.’s appetite disappeared. He had forgotten about the reporter at yesterday’s game.

His father picked up the
Morning Herald.
“Listen to this: ‘Theodore Vernon Adams, the Peach Street Mudders’ sensational third baseman, has more up his sleeve than
a good throwing arm. In a tense game against the Green Dragons, yesterday, he predicted almost
exactly
where the batter was going to hit more than 90 percent of the time. What is this boy wonder’s secret? Is he psychic?’”

“Hold it, hold it!” his father called to him. “What are you angry about? That’s
good
news, not bad.”

“Right,” said Mrs. Adams. “We always knew you were smart, but we had no idea you had such a special talent.”

“I’m just teasing you. Come back here and tell us all about it.”

T.V. inhaled a deep breath, let it out, and sat back down. He was halfway through explaining what the article was about when
the phone rang. His mother answered it.

He took the receiver from her. “Yes?”

“Don’t try to use your ‘powers’ in the game against the Stockades, or you’ll be sorry. And you know it!”

T.V. returned to the table, his heart pounding.

“Who was that?” his father asked, peeking around the edge of the paper.

T.V. avoided his eyes. “Some kid … calling about the article.”

“Sounds like your fame is spreading quickly,” Mr. Adams said.

Mr. Adams laid the paper aside and patted T.V.’s hand. “Don’t worry, son. This too shall pass. Pretty soon you’ll be just
a regular guy again.”

Not soon enough, T.V. thought. But in the meantime, he promised himself, he would try to put the phone call out of his mind.

That afternoon T.V. got out his swimming trunks and went to the park pool. It was sunny and hot and he was sure a good swim
would make him feel better.

Cartboy Goes to Camp by L. A. Campbell
The Last Queen by C.W. Gortner
Agatha Raisin and the Perfect Paragon by Beaton, M. C.
The World After by Sonador Snow
The Last Days by Gary Chesla
First Kiss: The Ghost Bird Series: #10 (The Academy Ghost Bird Series) by C. L. Stone
The Art of Standing Still by Penny Culliford
Street of No Return by David Goodis, Robert Polito
Alexis the Icing on the Cupcake by Coco Simon
Natural Law by Joey W. Hill